It's been a week now since I took the test, and here are some random thoughts to end this series.

1. I have no need for any sort of official Spanish proficiency certification. I took this test basically as the ultimate challenge because I had nothing better to do and I thought my Spanish was very good. If I don't pass, I doubt I'll redo the test. My impression is that this test, in its current format, is not a very good overall assessment of proficiency. There is a definite bias towards written academic Spanish. That's fine but it's not my area of interest. I'm much more interested in the spoken language.

2. For those readers interested in taking this test or anything similar, I can only say that you must practice for the test. For me the hardest part was the writing test because it was the skill that I had practiced the least. I could never bring myself to set the timer for 50 minutes and then write a 450-word essay in longhand. And afterwards go over it with a tutor. But that's what you should do a few times. It's very hard to do but that is exactly what the test requires.

3. For me it was interesting to note how the time constraint plays an important role in the assessment of proficiency. It was hard to say that any material was intrinsically of a certain level, i.e. C2 vs C1 or B2 level texts. It's just that you have to be able to assimilate more material very quickly. For the test designers this is what will differentiate the various levels of proficiency. In the speaking test for example, it's difficult to say what is C2 language. I would imagine that the examiner is ultimately looking to see if the candidate can function somewhat like a native speaker in the same situation.

4. This test confirmed very clearly an idea that I have discussed many times here and on the HTLAL site: the importance of mastering a small number of things very well rather than a lot of things poorly. Nowhere in the test was there any very complicated grammar or vocabulary. Not one imperfect of the subjunctive, no fancy idiomatic expressions, no hypothetical constructions. It was all very straightforward language and less complicated than what I read in El Mundo or in El Pais. There was just a lot of it.

In my opinion the danger here is wasting time chasing too many words. It's an endless pursuit. I'm a great fan of idiomatic expressions but I realized a while ago that rather than trying to learn to use every idiom that I come across, it's more effective to really work on using the 25 I have at the tip of my tongue. Now, when I meet new words, I ask myself: "Am I going to use this or is it something that's nice to see?". So my everyday working vocabulary expands quite slowly but what I do use comes out better than ever.

5. One thing that was very striking was the complete absence of conversational interactive language that one finds in television fiction or series. Like most people I find this material very enjoyable. I love to watch telenovelas or the Spanish series but this material does not figure in the test. For exam purposes concentrate on non-fiction.
Last edited by s_allard on Mon Dec 04, 2017 3:26 am, edited 1 time in total.
18 x

I really enjoyed your series about the DELE C2. It's highly unlikely that I'll ever sit an exam but I do think about it from time to time. I have absolutely no need for it, but it sure would be fun to have the certificate. Thanks for sharing.

Thanks for telling us your final thoughts. 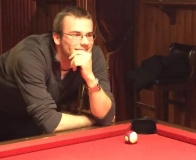 Very interesting indeed. I'm considering taking the C1 test for Spanish in May since I'm working in Valencía for the whole school year, and I heard or read somewhere (might be from you or from teachers) that the difference between C1 and C2 might not be that big, and that C2 might actually even be easier than C1.

In my case the hardest is listening, between I find it difficult to understand natives speaking togethers when they use idioms and don't speak hard enough. I have been watching El Barco, for example, and am struggling, so I'm changing series for Once Upon A Time in Spanish on Netflix, which is much easier and I get more out of it.

It's nice to know that the writing skill is more important to spend time on, because I have access to a teacher here (she is my supervisor) and she corrects my production on my log every week, which keeps me motivated to keep writing my log ^^
1 x
Language learning and teaching website as a French teacher of Dutch and English: cameleondeslangues.be
Post Reply
4 posts • Page 1 of 1