I started four new French and Spanish tv shows this week. Three look good, while I've already deleted the fourth from my queue.


Pablo Escobar, El Patrón del Mal (Netflix) - This is a 113 episode Columbian telenovela about the life of Escobar. I enjoyed the first two episodes, and it feels down to earth and real. I don't know how I'll watch all 113 episodes, though - that's a serious commitment.

Narcos (Netflix) - A US version of Pablo Escobar's life. It felt like an MTV Hollywood gangsta take on things. There was also an annoying English voice over during most of the first episode - even though this is supposed to be a Spanish-language series. This got great reviews; I thought it sucked. 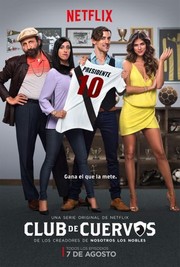 Club de Cuervos (Netflix) - A brother and sister fight for control of a Mexican soccer club. The first episode was sexy and funny and smart.

Kaboul Kitchen (MHZ) - A comedy about ex-pats in Afghanistan. I wasn't sure this was a good idea at all for a comedy, but there have been other classic comedies set in wartime ... so I gave this one a shot. I liked the first episode a lot.
1 x
Santiago Posteguillo, La traición de Roma:
Le Clézio, Désert:
Elena Ferrante, La vita bugiardi degli adulti:
Greek 101:
Assimil German:

This might be slightly off-topic, but I'm looking for advise on how to best improve listening comprehension when watching something with Spanish audio with the option of English audio or English subtitles.

I've just started watching Star Trek TNG in Spanish, and I've already seen the series in English, so that's helping me figure out what is being said in many situations, but it's often difficult for me to understand whole parts of a conversation. I don't have subtitles for this show (they're not working for some reason) but I can switch to English audio. Is it a better idea to listen to the English first then the Spanish, or listen to the Spanish then English if I wasn't sure on something? I imagine the first is better since it means you can actually connect meaning to Spanish speech while hearing it, but maybe some people think the other way is better?

Also, what about the situation where I'm listening to something in Spanish and I have English and Spanish subtitles available? I've seen recommendations in the past, even by creators of language learning content, to only use the English subtitles only if you find it necessary, but I think the same line of reasoning I mentioned above for listening to English audio works for this case too.

orge wrote:This might be slightly off-topic, but I'm looking for advise on how to best improve listening comprehension when watching something with Spanish audio with the option of English audio or English subtitles.

orge wrote:This might be slightly off-topic, but I'm looking for advise on how to best improve listening comprehension when watching something with Spanish audio with the option of English audio or English subtitles.

You might want to try something like that. Obviously Star Trek has a ton of episodes, but you might want to watch one multiple times until the dialog seems really easy to you.

Last challenge I think I watched Amelie 5 or 6 times. The first few times I watched with English subtitles, then I got the script and read it through 3 times, and then watched it again a few times without English subtitles. The funny thing is that sometimes I knew exactly what they were saying, and exactly what it meant, but I still had trouble catching all their words.
0 x
Starting the new Super Challenge!

Serpent wrote: ... I downloaded some tour guides in an audiobook section. ...

I have listened to French audio on hop-on hop-off bus tours, and I am aware of the possibility of downloading walking tour mp3s in English, but it just never occurred to me to look for tour audio in my target languages. What would be great about this is that you control the audio, you decide when to stop and start, and for counting it you just look at the total time of the audio files. It would even be fun to review the audio some rainy day later because it would remind you of an enjoyable day out.

Does anyone have suggestions of sources for mp3 walking tours in various languages? (I have a day in London coming up on the 28th of May, so I have a particular interest in this now!)

I've just done a fairly quick Google search and found http://www.walktalktour.com/ which have tours for London, Edinborough and Manchester in English, French, German and Spanish. They say their tours have an average of 45 minutes of audio, and they cost £5.95 each. Looking at their maps, an audio tour follows around an area with about 12-15 points to stop and listen. I'm thinking of buying "The City and the Tower" and seeing how it goes.

http://iaudioguide.com/ have more cities, but from the audio is more about the most popular location than about taking a walking tour. So, for example, there's a few minute track for Trafalgar Square, another one for the British Museum, etc. They sell theirs as mp3 downloads from Amazon, which is convenient.

Anybody know of any other options, with more languages and possibly free? I imagine some tourist destinations have their own audio tours you can download for cost or free. Any suggestions?
2 x
Starting the new Super Challenge!

well mine were just from torrents tbh

it was in Italian anyway.
I thought Cristina said pretty clearly that these don't count?
0 x
LyricsTraining now has Finnish and Polish

One of my favorite series to read during my high school days was Travis McGee. This character has many similarities to Raymond Chandler in writing style, but the whole thing takes place in 1960s-1980s Florida, among sunburns, vacationing college student on Easter Break, and the other beach and boat scenery. This series has some of the evilest "bad guys" I've ever seen.
It is available in English, and the first book has a good, recent translation into Spanish. There are many other translations into Spanish over the years, but they are a little hard to find (at least for me).
I'm not sure what other languages they may have been translated into.
1 x
SC Spanish
: 100 books
: 100 movies
: 50000 reviews (irish)

"50,000 Reps: Engage in casual conversations at the speed of native speakers."

Serpent wrote:well mine were just from torrents tbh

it was in Italian anyway.
I thought Cristina said pretty clearly that these don't count?

I know she said live tours and excursions were out, but I don't know if she mentioned recordings. Allowed for the SC or not it would be a fun and useful practice activity. I've bought the walktalktour City and Tower tour in French. I listened to the first track (St Paul's) and it sounds good.
0 x
Starting the new Super Challenge!

I asked her explicitly about these buses in that infamous thread.
0 x
LyricsTraining now has Finnish and Polish

Serpent wrote:I asked her explicitly about these buses in that infamous thread.

I understand why buses are a problem. As I mentioned above, due to the gaps as the bus moves from point to point it would be difficult to ascertain how much time you are devoting to listening to the audio. On the other hand, mp3 audio tours are a different matter, something we should perhaps ask Cristina about directly. They are very much like podcasts, and I could actually imagine using them without even going on the excursion. Sort of like a virtual language tour of a city.
0 x
Starting the new Super Challenge!
Post Reply
33 posts