I tried watching a random comedy video tonight. I couldn't understand much of what they were saying, though I got the gist of the jokes thanks to what was happening on the screen.

This morning, I read another article on Satori Reader and learned that in addition to the meaning "to erect" or "to stand something up" that WK teaches, 立てる has a large number of possible meanings, including stuff like "to cause", or "to make (a sound)". Not that stuff like that is exactly unexpected, but it's still frustrating as a learner.
0 x

Recently, I've been taking advantage of the weekends to focus on other activities, so serious Japanese study has been confined to weekdays, and even then, I rarely do much beyond WK + watching anime. But last night, I did watch ep15 of Cardcaptor Sakura.

I had no idea what was going on in the episode, but I did notice that they kept saying something that sounded like "kajiu" while fighting, in a context that made it sound like an insult. This is especially interesting since us Westerners know kaiju as a generic term for Godzilla and friends. I initially assumed it was either a mis-hearing or a homophone or near-homophone, but much to my surprise, it turns out that Cardcaptor Sakura has accurate Japanese subtitles available on Netflix, so I was able to confirm that they were saying 怪獣, which turns out to be the same word for Godzilla that we know. The English subtitles translate it as Kero-chan calling Sakura "a monster".

P.S. By complete coincidence, 怪獣 turns out to be a lvl26 vocab word on WK, so I should be learning it within the next few days. It's funny how things line up like that.
4 x

This even, I was trying to get through my backlog of SRS reviews on Satori Reader (after not touching it all weekend), and discovered that I had 掛かる in my deck, meaning "to take (time/money)". It was written in kana in the article, which is why I added it, but for some reason, it shows up with kanji in the SRS review itself. Anyway, I recently learned the kanji on WK, so I went over to WK to see if it was a vocab word I'd be learning soon. Sure enough, it is, except that on WK, the meaning is listed as "to be hung", with no mention of the other meaning. Out of curiosity, I checked Wiktionary, which listed no less than eleven different meanings for the word. And it's not like it's just variations on a similar concept either - the eleven meanings cover a lot of seemingly unrelated uses. (╯°□°)╯︵ ┻━┻

In other news, I had my first burns on WK this afternoon. To a certain extent, it feels silly to celebrate, since it requires no uncommon skill or dedication, just waiting for mechanically pre-determined intervals of time to expire - I've known the exact date and time of when my first burn would be for over five months. But it is still a neat milestone. 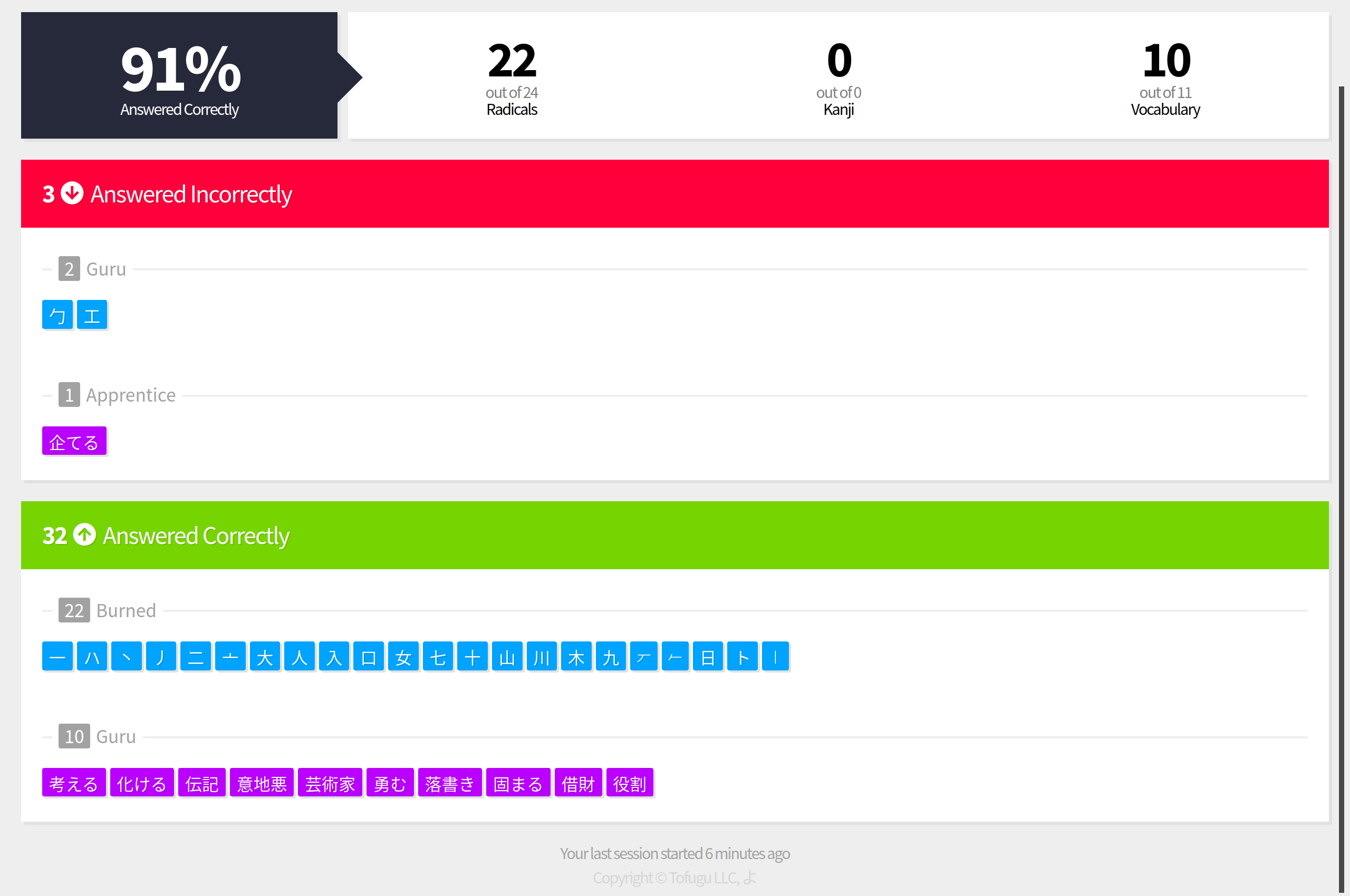 There's a Cure Dolly video on it which may help, even if you just turn the audio off and read the subtitles:
https://www.youtube.com/watch?v=1MbqmZPySPQ

It's just one of those all-purpose verbs, like "get" (get up = wake up, get out = leave, get down with something = find something acceptable, get = receive, get down to business = stop messing around, etc.).
2 x
HypLern - Interlinear books

crush wrote:There's a Cure Dolly video on it which may help, even if you just turn the audio off and read the subtitles:
https://www.youtube.com/watch?v=1MbqmZPySPQ

It's just one of those all-purpose verbs, like "get" (get up = wake up, get out = leave, get down with something = find something acceptable, get = receive, get down to business = stop messing around, etc.).

Thanks, that was very helpful.

I tried reading the second Oku-Nikkou article on SR again yesterday only to give up in frustration after just three sentences. I wish it was easier to find reading practice suitable for my level. I've also given up on Cardcaptor Sakura for now. I decided that I just wasn't understanding enough of it to make it useful for listening practice. At least with The Dragon Prince, I can occasionally understand bits of what they're saying.

Incidentally, there's a running joke in The Dragon Prince where Claudia calls her coffee "hot brown morning potion". The first time, the Japanese dub did translate it, but in s2e2, she says it again and for some reason, the Japanese dub just translated it as "coffee" (or コーヒー), ruining the joke.
0 x

golyplot wrote:I tried reading the second Oku-Nikkou article on SR again yesterday only to give up in frustration after just three sentences. I wish it was easier to find reading practice suitable for my level.

I believe that series is a bit more difficult than the others on the site, more literary. Try checking out Kona's Big Adventure for example.
0 x
HypLern - Interlinear books

crush wrote:I believe that series is a bit more difficult than the others on the site, more literary. Try checking out Kona's Big Adventure for example.

I suspected as much. The issue is that only the first two chapters of any given story are available free. Sometimes I've been tempted to just go ahead and subscribe so I can read one of the better stories (like Akiko's Foreign Exchange) all the way through, but I feel like I should go through all the freely available chapters before subscribing. At least that will give me a sampling and show which stories might be worth continuing. For now, I've started going through the Dialogs stories, which are shorter and easier.
0 x

I pretty much put Japanese on hold last Thursday, and with season 3 of Dark coming out today, I plan to watch that for a while instead of anything in Japanese.

But back before I gave up on Cardcaptor Sakura, etc. I definitely wondered how I could ease the transition as far as listening practice goes. I wish there were ways to make things more comprehensible. But the best I can do is watch a show like The Dragon Prince that I've already seen before, but there's very few shows I've seen before that are a) dubbed in Japanese and b) good enough that I wouldn't mind watching a second time when I can't understand anything and I've already rewatched most of those.
1 x

As of tonight, I've officially been studying Japanese for six months, so time for another big status update. I'm halfway through my planned study period of a year, so this update should be more significant than most, and yet it feels like a strange time to do an update, since I've put Japanese on hold, and haven't done any Japanese study in almost a week apart from WK. So I guess I'll write about what I was doing before I put my studies on hold.

Overall, progress in Japanese has been much slower than I originally expected. On the bright side, I did finally start watching anime to practice Japanese, the original premise of this log, so at least it's no longer false advertising. But even before I took a break, it was beginning to feel a bit futile, like I can't actually understand enough to benefit when watching shows. But for what it's worth, here's all the shows I watched in Japanese without subtitles


Apart from watching stuff in Japanese and WK, I read a few articles on Satori Reader. It seems like a good way to study Japanese, but I never seem to have the time. It's odd how I feel like I'm never able to devote sufficient time to Japanese study, despite spending a significant fraction of my free time on it. Of course, WK takes up a lot of time each day, as do the shows I was watching.

Wanikani has definitely been getting harder, and recent days were especially brutal, though I did better this evening at least. Over the last week, I averaged over 280 reviews per day, with an overall accuracy rate of barely 83%. I have no idea how I'll survive the "fast levels" at the end of the year when it gets really hard. The later levels just have so many abstract terms with subtle differences in correct answers (and I often wonder how much they are true differences in meaning vs what WK happens to accept). Plus of course it's just harder to remember everything in general with all the kanji and weird readings.

I was hoping that general Japanese exposure would help reinforce things on Wanikani, and to some extent it has. For example, I learned the word 眠い on WK today, and I already knew the reading easily from listening to Nihongo con Teppei. But the words that appear frequently elsewhere are just the "easy" words - 99% of what I see on WK doesn't show up elsewhere, or at least doesn't show up frequently enough for me to actually recognize it. (Incidentally, listening practice is especially unhelpful for this since Japanese's large number of homophones means that you can only rarely tell what words you're actually hearing, especially for all those random Jukugo words).

Anyway, that concludes the rant/status update. Hopefully things will take a turn for the better soon. At the very least, I should be able to finish my break and at least start studying Japanese again soon.
5 x
Post Reply
495 posts