A short and simple song today. I would wager that it is known by practically any Basque speaker. Words originally by the poet Gabriel Aresti in 1976, music by the musician Urko. Here is a more recent rockified version:

Another beautiful song by Huntza which will serve as an occasion for me to talk about ladybirds.

Singers abound in the snows
Ladybirds and crickets
They have painted
The walls of the hearts...

Here is a map of the word 'ladybird, ladybug' from the monumental dialectical survey Euskararen Herri Hizkeren Atlasa (EHHA). As you can see, there is a healthy amount of variation for this insect, but most have the common element of a female name + the colour red.

For example, in Nafarroa and in Behe-Nafarroa, there is kattalingorri, from the feminine name Kattalin + the colour red gorri.
In most of Gipuzkoa, andremari from the noun andere, meaning lady + mari, also a female name. So ladybug in these Gipuzkoan dialects is Lady Mary.

The word that Huntza uses in this song for ladybug, marigorringo, is found in much of Bizkaia and has also been accepted as a designation for the insect in the standard dialect. Marigorringo comes from mari 'Mary' + gorringo 'the yolk of an egg'. That is to say, it refers to the reddish colour of the yolk of an egg.

But you can have a feminine garment, such as a skirt or an apron. Observe gonagorri 'red skirt' and amonamaltalgorri 'red grandma's apron'. The red colour is in the scientific Latin name for the ladybug as well. Coccinus means 'scarlet, crimson very red', derived from the insect which the Romans referred to as coccum, and which they used to dye their fabric.

I have found by asking Moroccans that in Tashelhit, depending on the Tashelhit dialect, you call them mrim n igran, literally Miriam (=Mary) of the fields or '3cha n igran', that is to say, Aisha of the fields. So in the Berber languages, the association with a female holds. By the way, the Tashelhit word igr comes from Latin/African Romance ager, meaning field.

As for Moroccan Arabic, it depends on the dialect again, but I've found this to be relatively common: 7myer jdda, that is to say, 'the little donkey of the grandmother'. Another Moroccan told me that some people refer to ladybirds as taxi sghar (!), 'little taxis'. This is what a taxi looks like in Casablanca:

But wait, I'm not finished with ladybugs yet! Of course, I had to talk about Galician.

This is a fascinating series of linguistic videos that the Galician autonomous TV channel, TVG has been releasing. The point of this series is to collect and talk about dialectical diversity in Galician. TVG suggests a word on their Instagram account, and the audience sends in words that they themselves have heard or used. I find the concept and the execution to be simple but brilliant at the same time. In Galician as in Basque, there is a LOT of dialectical (if not idiolectical!) variation, but the standard ones are maruxiña (a diminutive of Maria) and xoaniña (c.f. Portuguese joaninha).

The presenter sings several popular songs or ditties or rhymes that feature the ladybird with other names. It's a chicken-egg problem, whether it was the rhyme that gave the name to the ladybird, or whether they have merely popularised its usage. For example, reirrei is a popular word for the ladybird in the south of Galicia, meaning literally Kingking, which is associated with this rhyme:

The use of insects as the subject of divination seems to have been quite widespread in earlier times, because there's another name that the presenter mentions, (a)diviñon, meaning 'diviner'. It is associated with this rhyme:

adiviñon, adiviñon, mañá fai sol ou non?
Diviner, diviner, tomorrow, will it be sunny or not?

Interestingly enough, asking the ladybird for predictions on the future is not only true of Galician but of Basque as well. There is a multitude of traditional rhymes in Basque as well.

Ladybird,
In heaven, what's the news?

And to finish off, here are some of the words collected for Catalan. There is a dizzying variety of forms:

I already posted a dialect map of Mallorca in a previous post, but I'll put it here again. Source is the Atles Lingüístic del Domini Català. 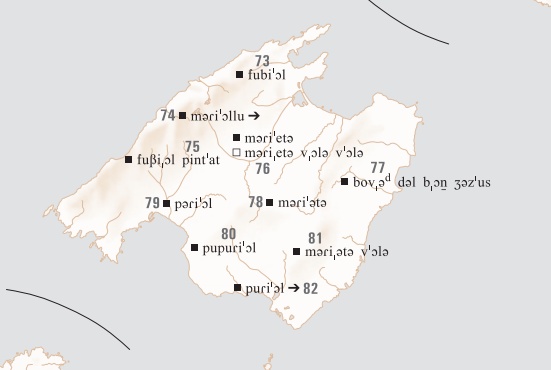 In Llucmajor they say poporiol, in Campos where I used to live they say marieta (like in Catalonia), in Inca they say poriol, in Son Servera, they say bover del bon Jesus (the cowherd of good Jesus). In Ciutat, that is to say Palma, they say marieta. By the way, the reason why we call Palma Ciutat and the rest of Mallorca as the part forànea is that back in the day, Palma literally was the only big city in all of Mallorca. And that has stuck.

There are also rhymes in Mallorca associated with the ladybug, but unlike in Galician and in Basque, they don't have to do with the weather.

I repeat here what my Mallorcan friend told me he says in his town, close to Llucmajor. First you hold the ladybird in your hand:

Little painted ladybird, where do you have your beloved? Around here or in Ciutat?

So this rhyme has to do with love! I find it adorable.
0 x
زندگی را با عشق
نوش جان باید کرد

Anari is a Basque singer songwriter. She's been compared to PJ Harvey but as a great fan of PJ Harvey, I don't think that's fair to either of them. This song is called Harriak, rocks.

I gave my arm
You took only my hand
And yet you say that you're not afraid of me.

White snow is falling from a black sky.
Each makes a wall in their own manner.
A pile of rocks is waiting for me in bed.
Let me hide in yours today.

One time, I ate whole an entire bridge.
From the first to the last rock.
In order to not go
Where I wanted so much

I'll give you a fish, to understand how it grows, how much water it needs to breath, how much water to live, we've piled up a bunch of rocks behind our eyes: bridges, walls, paths, houses, rocks, in the end, bodies, questions, eyes, words, keys and beds, as if we are afflicted by an emotional Diogenes syndrome, we plant old dreams in new and fertile bodies, giving ourselves away until we forget who we are in the loins of others, hug me hard with your legs so that I don't fly off, I want to enter into you to see who we are, I'll give you a fear to understand how it grows, how much yous it needs to breath, how much uses it needs to live.
0 x
زندگی را با عشق
نوش جان باید کرد

guyome wrote:I had to look up entà, apparently it is specific to the Gascon dialect.

You made me interested so I looked it up as well. In Gascon and in the subdialect Aranese, entà can be reduced to tà. Entà/tà can be used to mean the equivalent of Catalan cap a (direction, towards) as well as per a (finality, beneficiary). Standard Occitan only has per to cover all of these meanings. Here are some examples of Aranese that I found online that I 'translated' to standard Occitan.

guyome wrote:You probably already know about it but I thought I'd mention Mintzoak, "a platform for the Northern Basque Country’s oral memory", which offers hours of interviews with inhabitants of the northern provinces.

A good webpage that shows the different dialects in the Basque Country, for saying 'we speak Basque'. Click to listen.

In the unified dialect, it is guk euskaraz hitz egiten dugu.

The author of the lyrics is Daniel Loddo, the quite incredible Occitan ethnomusicologist who plays the guitar in the group (and is incidentally blind). There's something very haunting about a hymn to one's country that has no official borders, no name, no state, no flag, no existence. A land of people without papers or homes, a land of 'eternal wanderers', if I may compare it to the old anti-Semitic trope. But whereas in the days of European nationalism, a people without a country were looked on suspiciously, as they could not be taken to be 'patriotic' to any of the emerging European nations, here it is taken in a defiantly positive sense.

If you knew, my country
Hides itself in the genèstes
In the flower that blooms
In the heart of wild animals
In the shadow that bleaches
In the south-eastern wind that strips naked
In the softness of a nest
In the pulse of a leaf

My country is down there
In the middle of a street
Where three children dance
For a miserable pittance
There it is, down there, in the cry
Of a shoe-shiner
Who wanders, defeated,
Without hope of coming back

D'un freta-sauvatons - a compound that seems to come from fretar + sabaton (shoes). In other words, a shoe-shiner.

My country is everywhere
Where beings are deprived of existence
Without papers or honour
Without home or without land.

talvera - this word has given the name of the group, a talvera is the edge of an uncultivated plot of land, a liminal wild place.

If you knew, my country
Hides in the corners
From the hour that runs away
And which seems eternal
In the desaturated colours
In the wild scents
In the sap of life
In the fear of the flashflood

My country shines
With a thousand chants
And dances to infinity
A people of sirens!

If you knew, my country
Is everywhere around waiting for you
If it doesn't exist anywhere
That's because it is in the whole world.
3 x
زندگی را با عشق
نوش جان باید کرد

This is probably my favourite of Mikel Laboa's songs.

The words are from the Basque author Bernardo Atxaga. Within the poem, he cites two Zuberoan (from Ipar Euskal Herria) songs and retains the Zuberoan dialect used in them.

Where are you going little bird
With your wings in the air?

For the full song in Zuberoan, see here.

What does the one who silences say
When he himself falls silent?

Who will help lost men?
Ones who cannot stand misery.

My beloved, where are you?
I do not see you
I don't know what's happened to you
Where have you gone off to?

A Mallorcan friend of mine with an interesting trait that is characteristic of certain dialects in Mallorca, namely Lloseta, Alaró and Binissalem and in the east part of Menorca, which is the replacement of the schwa with an open vowel /ɛ/.