All about language programs, courses, websites and other learning resources
Post Reply
2 posts • Page 1 of 1

Language Courses on an "Instalment" Basis
It would appear that, during the period from the 1960’s through the 1990’s, a small number of European publishing houses, or perhaps just one such company operating under different imprints, adopted a marketing strategy wherein complete (introductory level) language courses were offered for sale to the public on an “instalment” basis. Typically, each instalment comprised one lesson of a series of 30, 50, or more, with each package containing a slim pamphlet (a few full-sized or half-sized pages) and audio recordings (a 7-inch EP vinyl record, an audio cassette, or a compact disk). Although the weekly or monthly instalments were available via bookstores, newspaper stands, and the like, prospective buyers could also subscribe to the entire series for home delivery. In addition, publishers marketed storage binders as well as complete or partial collections of the individual course components. One such series was “Éditions Atlas” series to which members reineke and Daristani kindly introduced me a couple of years ago: https://forum.language-learners.org/viewtopic.php?f=19&t=5898 In many cases, these courses originated in one language-base (e.g., Italian) covering the popular European languages (English, French, German, Italian, Spanish) and were translated and marketed in alternate language-bases (e.g., French, English, etc.). Although several British, American, Canadian, and perhaps other publishers successfully marketed large sets of materials over the years on an instalment basis (courses, encyclopaedias, collections by author/theme, et cetera), I am under the impression that not many language courses were sold in this fashion, but I could be wrong. Recently, I came across yet other example of an instalment home-study language course on eBay.IT and, of course, could not resist the temptation to add it to my collection:

Globe Master corsi di lingua in 52 Lezioni "20 Ore"
The Globe Master “20 Ore” instalment-based series of self-instruction language courses was introduced in the middle 1960’s by the Italian publisher Zanasi Editoriale (Bologna). Languages covered in the Italian-based series were: English, French, German, Russian and, presumably, Spanish. I have not come across examples of these courses from alternate language-bases. Although this could have been due to a change to the series’ titles in the alternate languages, it could also be an indication of a weak market response. Nevertheless, I did come across a copy of the German course audio cassettes, which suggests that the 20 Ore series was sufficiently popular to merit the publication of a second edition incorporating changes in recording technologies.

Materials
Typical for the genre, the weekly instalment packages covered one lesson and comprised (a) a slim 7-inch x 9-inch pamphlet having pages numbered sequentially, for a total of 1,456 pages of instruction, (b) a 7-inch x 33-1/3 rpm EP vinyl record supplanted in subsequent editions by audio cassettes, the total duration of which was approximately 13 hours, (c) a 53rd volume containing an indexed glossary, and (d) a set of 3 storage cases subject to separate purchase. The image below depicts a portion of the pamphlets for the study of German from an Italian base. 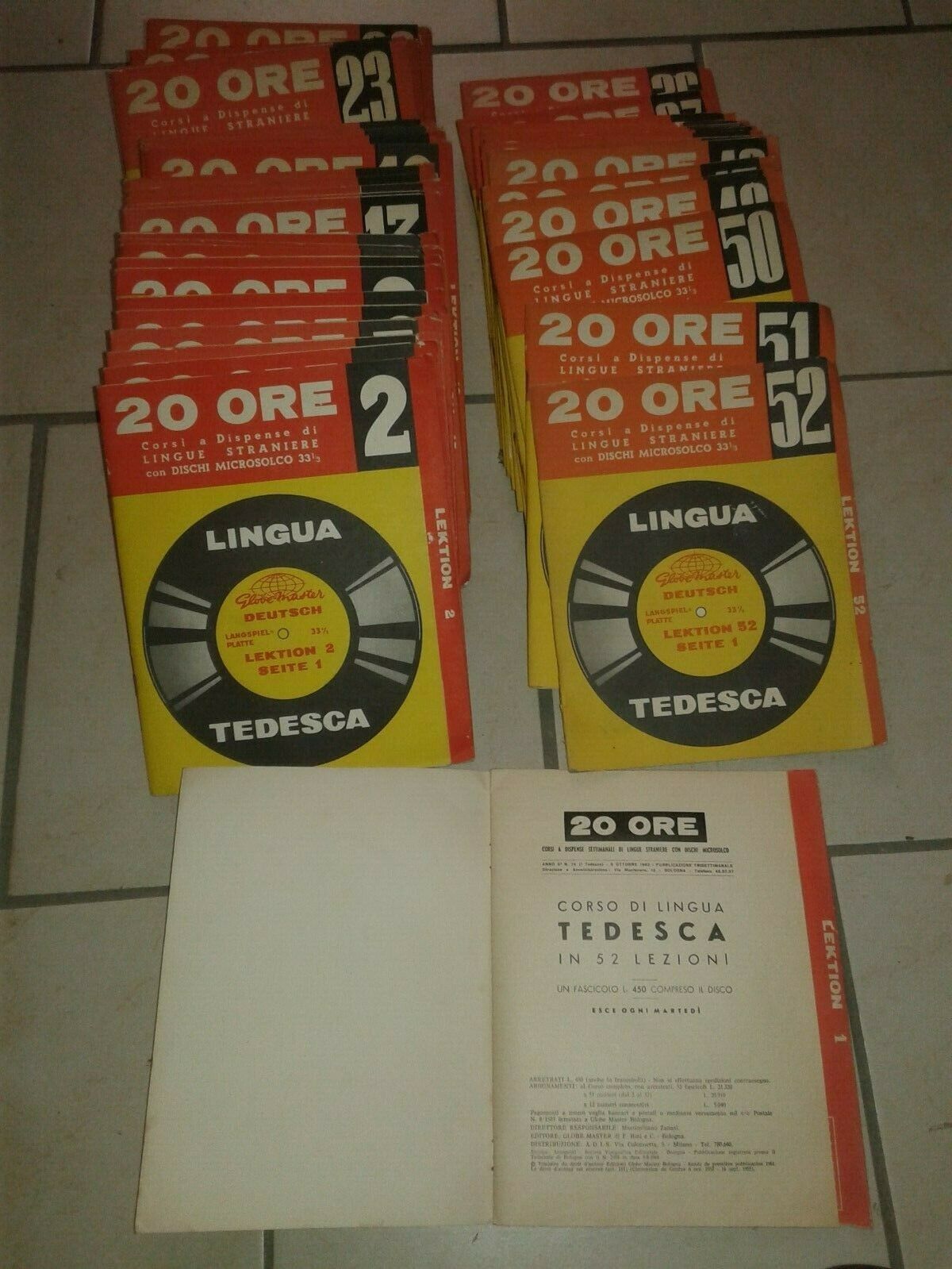 Complete courses were also available for purchase as two hardbound course books accompanied by the entire set of fifty-two 7-inch x 33-1/3 rpm EP vinyl records. It is clear from the photograph below that the printed materials were substantial. 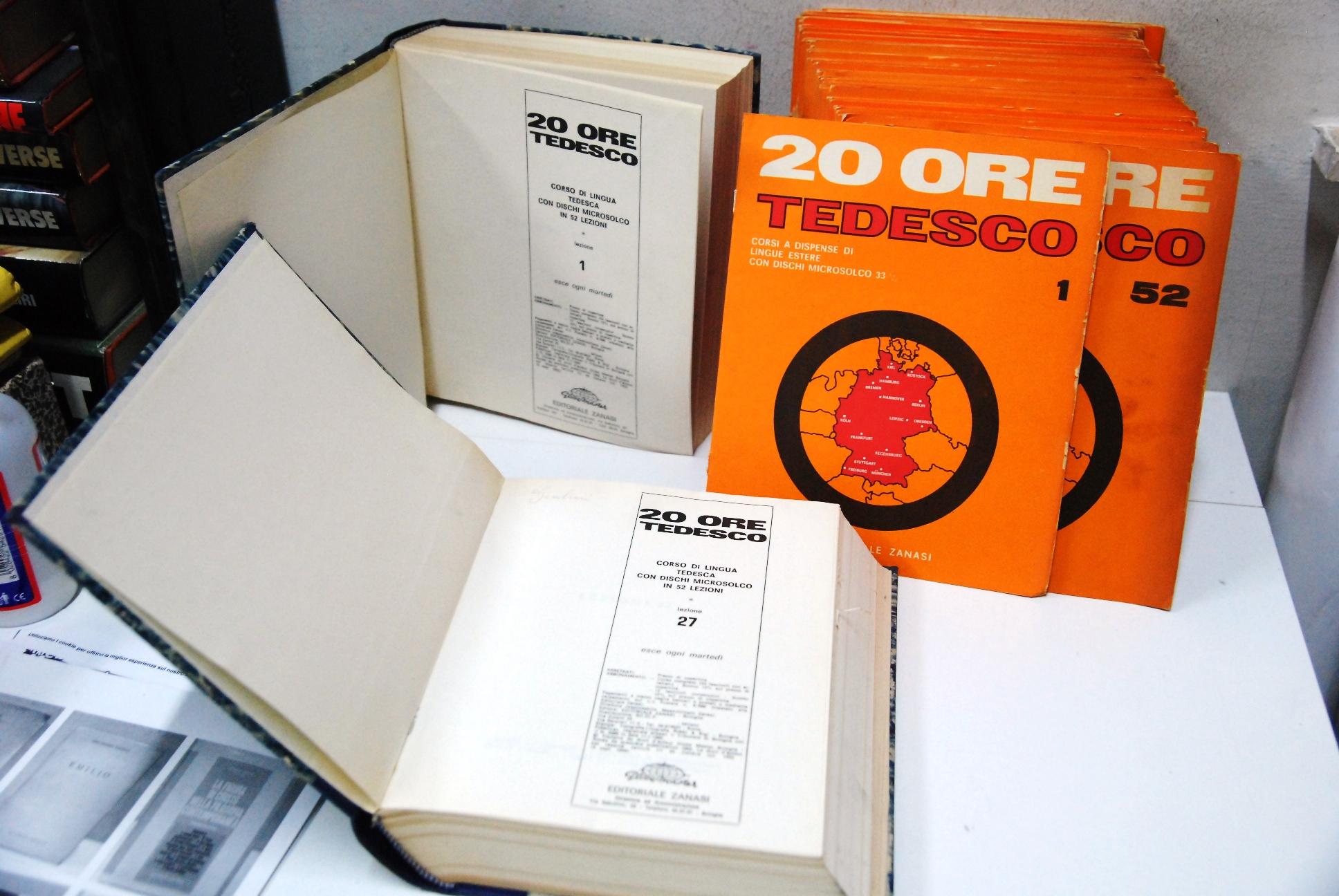 Description
In the preface to the first lesson, the publisher informs the student that the “Direct Method” language-learning was employed in these self-study courses. As shown in the images below, putting aside the initial lessons, the typical lesson presented the target language through a series of L2 recorded dialogues (about twice as long as a typical Assimil dialogue) with the L1 translation printed underneath. A separate “grammar section” provided expansions of the L2’s structure which were also recorded. Supplementary, unrecorded “notes on grammar” closed the instructional part of the lessons. The lessons terminated with brief L1-L2 translation exercises, accompanied by an answer key to the previous lesson’s exercises. There were no reading passages. The audio recordings were prepared with the assistance of voice-trained native-speakers whose speech was clear and well-articulated. In the initial lessons, the cadence of speech was artificially slow. However, by the middle of the course, the speed of delivery had increased to that of normal conversation, a feature of which I much appreciated. The course of instruction was well-conceived and provided the student with a realistic opportunity of achieving a level of competency somewhere within the CEFR B1 area. 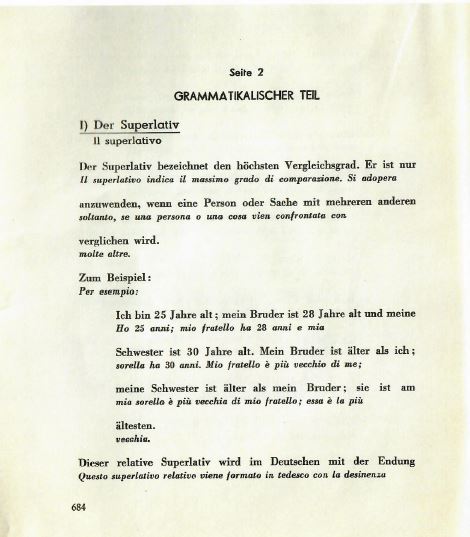 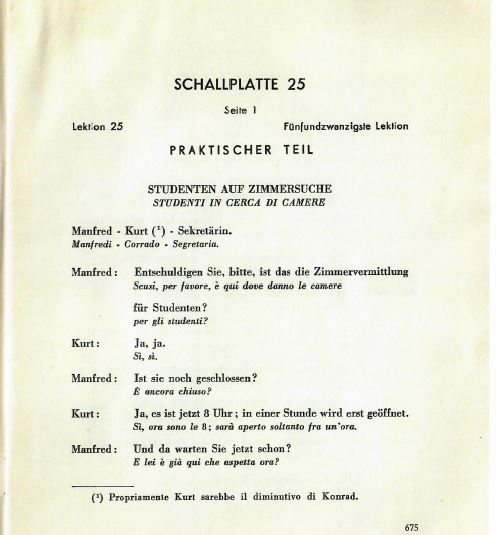 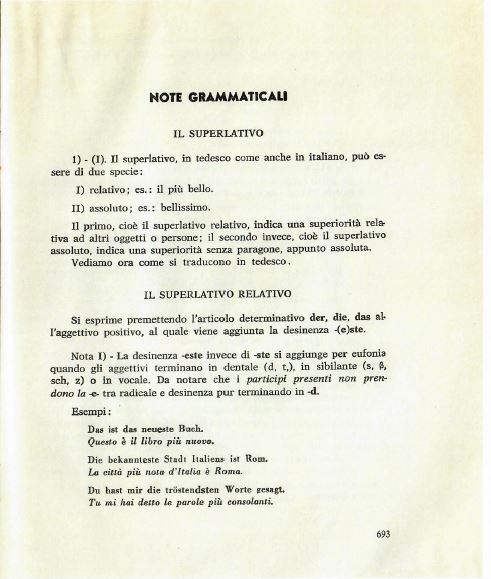 Market Appeal and Completion Rate?
As the “instalment” approach would not have appealed to me, I will merely reiterate the comments that I made under the “Éditions Atlas” discussion thread. The 52 instalments were available for purchase at newsstands, through subscription, and also for purchase as complete packages. Life being what it is, the probability of missing an instalment (more than once) would have been quite high. Re-ordering missed instalments or attempting to progress without them would have been bothersome. For quick learners, the necessity of awaiting the arrival of the latest instalment would have been a source of frustration and discouragement. I have doubts as to the efficacy of such a delivery process and I suspect that the "completion rate" would have been even lower than that for integral courses such as those by Assimil, Linguaphone, and the like.

Assessment of the “20 Ore” Courses: Superb!
Putting aside delivery problems which may have arisen with an “instalment” home-study language course, the materials themselves were very good, indeed. The combination of the scripted dialogues and exercises, which formed the core of the programme and which were every bit as effective as those offered by this product’s competitors, the clarity of the notes to the student, and the total duration of the audio recordings at some 13 hours including the much-appreciated natural cadence of speech in the more advanced lessons, would have been sufficient to bringing a determined, independent language-learner within the CEFR B1 zone. Collectors, start your engines!

Your reviews of older courses always have me lusting after owning them, and rushing to ebay to try to find copies

A few months ago, I stumbled upon a similar installment-based course in a book-swap library. I can't remember which book I gave, but in return I got a nicely bound and very thick collection of all 59 weekly installments from a 18 month course for Czech learning English in the 1940s!

Each weekly installment was associated not with a record, but with a live (!) weekly radio broadcast. So, there is, alas, no way for me to get the audio. Still, the course is certainly very entertaining, and I am sure was fun to collect and use.

Considering it was an 18 month course, it may seem strange that there are only 59 installments. Unfortunately, around installment 50, they were clearly having money issues. It mentioned that the previously sizeable (and paid) production team has slowly drifted away, due to declining sales, and was replaced with a couple of enthusiastic volunteers. Not surprisingly, this resulted in the quality of the installments falling. The radio station also stopped providing the corresponding broadcasts due to lack of listeners. Installment 58 lamented that "the next issue will be our last" and the last issue was a rather abrupt ending, which must have left the few remaining purchasers rather disappointed.

After a few weeks of owning this lovely collection, I told this story to a friend, whose eyes lit up and he was so enthusiastic for the story and the collection that I gave it to him.
2 x
Post Reply
2 posts • Page 1 of 1