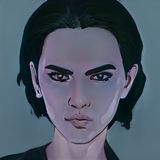 Well, I can think of three things that may make a language sound "Middle Eastern" (which I'm taking to mean similar to Arabic):
Hebrew used to have all of these traits, but 1 and 2 are lost in Standard Modern Hebrew. Some dialects retain these features and probably would sound "Middle Eastern" to you, probably moreso than Persian.

Persian has 1 and 3, so I guess that's enough to make a language sound "Middle Eastern".

But Inuktitut does not sound "Middle Eastern" even though it has some traits that are similar to Arabic. Each language had its own distinct phonotactics and sound distributions, and without Arabic loanwords it can only sound so much like Arabic.

Also, Inuktitut has a very small consonant inventory while Arabic has a very large one.
4 x
Corrections welcomed!

The prestige dialect of Iranian Persian has /ɣ/ and /χ/. Some more conservative varieties of Persian also have /q/ (including those of Afghanistan, Tajikistan and Uzbekistan IIRC), which is shared with Arabic and a fairly rare sound interlinguistically, but I don't imagine that's the kind of Persian you've heard. As for vowels, Persian has /æ/ all over the shop, and [æ] is a very common allophone of Arabic /a/.

Native Arabic speakers (including Jews from Yemen, Morocco, Iraq, etc.) maintain two of the typically Semitic pharyngealised consonants when speaking Hebrew, and also pronounce their rs as an alveolar tap or trill rather than an uvular trill; i.e. <ח> is /ħ/ (merged into /χ/ in contemporary Israeli Hebrew), <ע> is /ʕ/ (pronounced as a vowel in contemporary Israeli Hebrew), ר is /r/ (Israeli /ʀ/). Since Hebrew as spoken by younger native speakers is rather homogenous you may have come across some of those whose pronunciation is influenced by Arabic or Sephardi/Mizrahi readings of Biblical Hebrew. Sometimes people who don't have this accent when speaking will imitate it when singing if their music is in a Mizrahi style.

Then there are the main Kurdish languages: I think you'll find that both Kurmanji and Sorani sound closer to Persian than to anything else. That gets us past all the major languages of the region (with all due respect to Assyrian Neo-Aramaic, Mazandarani, Modern South Arabian, Qashqai, Luri, etc.), I don't know what other Western Asian languages you may have come across.

As for intonation, I can't say I've noticed huge similarities, although I would agree that out of Persian, Arabic and Turkish, Turkish has the most distinctive intonation. When it comes to Israeli Hebrew, the intonation is pretty much based on that of Yiddish, so it stands out even more.

In any case, I don't think "Middle Eastern languages" is much of a coherent category and I'd be surprised if people from outside the region would be able to reliable tell which languages are "Middle Eastern" and which are from other nearby regions. Westerners pretty regularly confuse Middle Easterners with North Africans, South Asians and Southern Europeans (for those Westerners who aren't Southern Europeans), so I think it might be just a vague sense people develop out of pretty superficial contact with these languages.
Last edited by Saim on Thu Aug 01, 2019 5:05 pm, edited 2 times in total.
5 x
log

To add on to what Deinonysus and Saim said, Turkish is notable both among languages of the Middle East and among Turkic languages for not having any uvular consonants. In general it seems like the presence of uvulars, in particular /q~ɢ/, /χ/ and /ʁ/, that's responsible for the "Middle Eastern" perception, seeing as how the presence of those consonants is about the only significant similarity I can think of between Arabic and Persian phonologies. Check out the Mam language in the video below and see if it sounds "Middle Eastern" to you.
4 x

According to François Micheloud, the founder of the HTLAL website, it is largely a function of how much cumin powder one adds to the dish.
Last edited by lavengro on Fri Aug 02, 2019 12:45 am, edited 1 time in total.
3 x
“They lived and laughed and loved and left.”

According to François Micheloud, the founder of the HTLAL website, it is largely a function of how much cumin powder one adds to the dish.

Oops, sorry, I think I misdirected myself there and was thinking of François' separate gastronomic blog at fxcuisine.com
2 x
“They lived and laughed and loved and left.”
Post Reply
7 posts • Page 1 of 1