Ideally, please say what languages are available, and if it's android or IOS! 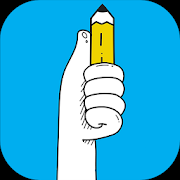 Since I read this thread, I have been looking for a way to pair my interest in drawing with my interest in language learning. This week it suddenly hit me: pictionary!

After looking thru a few apps, I have settled on Draw it.

Pros:
--Draw it gives you two options to draw, so if you don't know one word, you might know the other.
--It appears that some kind of AI guesses what you are drawing. This means you are not inconveniencing another person if your drawings are bad, or if you don't know either word and get stuck (there is a skip button as well, but it will make you watch an ad)
--Draw it is a competitive game, which makes it addictive. The rounds are timed, and the person who is able to make the AI guess the correct answer the most times in the allotted time wins.
--Ability to see what other people are drawing. Draw it appears to pair you with people who have unlocked the same words as you. So often, if you aren't 100% sure what the word is, you can guess based on what other people are drawing.

Cons:
--This is an ad supported app. There is a VIP option to get rid of them if this is a huge problem for you.
--Draw it does not have language settings, it chooses the language based on your phone's system language.

This is an app for both Android and iOS

It did not work for:
Hindi, Arabic, Indonesian, Swahili, Vietnamese, Persian, Ukranian, Greek

I made an assumption that if it didn't have the larger language spoken in a region, it probably doesn't have the smaller ones either (EG, if there is no support for Hindi, I assumed there is no support for Punjabi, Bangla, or Tamil as well)
5 x
Joyo Kanji:
Japanese Intermediate 2:
--
Spanish Intermediate 2:
--
Read a Book in Esperanto:
Language Log in Esperanto

- PalTalk (there are hundreds of rooms for native speakers of different languages, and they talk about almost everything, from politics to karaoke singing)
- TED
2 x

I have set Windows to French, so now anything I want to do has to be in French. eg File-->Save is now Fichier-->Enregistrer.

not available for Android or iOS.
3 x

This app has a number of live streaming radio stations, in a very wide variety of languages.

Goodnotes for iPad (iOS). This is a note taking app and requires the Apple pencil. I use it a lot for pracitising writing in my target languages, making word lists etc. It can also convert handwritten notes to typed text. It can recognise a number of languages for conversion into text, the FIGS of course, but also e.g. Russian, Turkish, Portuguese, Dutch, Japanese, Chinese and Korean.

In addition I also use it for creating electronic versions of course books I have bought, I simply use a scanner app on the iPad to scan all relevant pages and then I store them in Goodnotes, which means that I can make annotations, highlights etc. in the texts without actually doing it in the physical book.
1 x
Ich grolle nicht

I have set Windows to French, so now anything I want to do has to be in French. eg File-->Save is now Fichier-->Enregistrer.

not available for Android or iOS.

I'm pretty sure you can do this with all popular operating systems. In fact, I just changed my language on my phone, which uses Android, to German. Doing so changed the default language for all of my apps to German (or rather, all of the apps that have been localized to support German) without needing to restart my phone.
3 x
Prefered gender pronouns: Masculine

ProjectX can extract subtitles and audios from TV programs you recorded (German, French, Spanish, British channels).
You needed to separate the subtitle files when you used Lingo Player's translation function (now gone).
But you can still use subtitles in Lingo Player to read them comfortably as a text.
2 x
Post Reply
7 posts • Page 1 of 1