An area with study groups for various languages. Group members help each other, share resources and experience. Study groups are permanent but the members rotate and change.
Post Reply
168 posts

Vocabulary is obviously important. Dutch students learning English, French and German (and other languages) have a number of online resources to improve their vocabularies in those languages. Here are some parallel text lists with some explanations. They are available in EN-NL, FR-NL and DU-NL, each for two Dutch education programs HAVO and VWO. The German versions are combined HAVO/VWO.

This is a surprisingly comprehensive free online Dutch-language library of over 100,000 articles about a whole range of interesting and useful topics written by 3,325 contributers. It is sort of like Wikipedia, but the articles tend to be short (one or more pages) on rather practical subjects. The stated goal is for InfoNu to become the biggest information source on the Internet. Presumably they mean "in Dutch" since it is only written in Dutch.

The main topic categories are:

So you see there is a little something for everyone. The layout is attractive. It is almost all text with very few images or graphics.

InfoNu could be described as Dutch language islands on steroids. Short, concise articles on everything you need to read, write or talk about. Read all these 100,000 articles and not only will you learn a great deal but you'll probably become C2 in reading Dutch.

Phew! New courses, lots of Dutch, and my head is filling up already!

All 6 courses that I'm taking are in Dutch, and so I'll be getting at least 9 hours a week of listening practice. There's lots of reading as well, which is nice. I don't have any difficulty with either but I do learn a new word occasionally.

I probably could have written this at the end of the week, and it might have fitted better, but I didn't want to leave tommus all alone until then! I'll maybe take a look at what you posted later and comment on some of it in another post, but right now it's a bit of information overload! So I've decided I'll choose something and we can talk about it perhaps? You've posted in your log before sentences and constructions that you struggle with; do you have any new ones? I did the same in my first couple years of learning Dutch (asking about certain constructions/what sounds natural and so on), although I asked Dutch people I knew online about them (on Skype, various chatrooms, etc) so there was more instant feedback. Even though I don't do it as often as back then, I still find it a valuable exercise, and the more one progresses, the less one is confused about and so a forum becomes a more and more okay place to do this in.

This semester I'll be continuing learning words out of Thematische woordenschat Nederlands voor anderstaligen; we'll be learning the last 'advanced' 1500 words of the 6000 that the book has to offer. I've talked about the book before, but there's three levels of words in it: 3000 basiswoorden en 3000 vervolgwoorden... oops, did I write 'en' instead of and?

Within the basiswoordenschat, there's 1000 elementaire woordenschat words. The introduction, chapter 6 and chapter 10 can be found online so that people know what they're going to buy, which I find quite helpful. Anyways, while word lists are often iffy, so far I've found the words in it quite good and I like the pictures that are included for some words. It's also all in Dutch. In any case, Leiden uses it in their Dutch studies program and so I'm going to memorize them all! To learn 1500 words in a semester, you need to learn 15 a day, so that'll be a bit of a struggle. Perhaps it's cause for me to finally get over my dislike of anki and other SRS apps? Learning specific words in a specific order is what it excels at after all. Word lists can't be copyrighted, so if someone wants me to make a list of all 6000 words then let me know. There's a list in the back, with page numbers as to where they're found, but I'm not sure the legalities of distributing that.

I'm still struggling a bit with Peter's 365 day challenge--already 2 missed days this month! Oops. But hopefully I won't have any more missed days now that my courses have started again, after all, if I go an entire day without doing 30 minutes of coursework then I'm going to quickly fall behind!

How's everyone's week been? (Both Dutch wise and in general; whatever you want to share

)
4 x
All comments and corrections welcome.

What sorts of subjects (material) are being taught in these courses? Sounds very comprehensive! Sounds like the kind of language immersion that the rest of us can only dream of.

trui wrote:I didn't want to leave tommus all alone until then!

Well that is appreciated. But anyway, I should be spending more time learning Dutch than writing about it. But I did get a bit more Dutch reading done when the Forum was down temporarily. As I mentioned earlier, there used to be a paucity of high quality, interesting Dutch language material on the Internet. But that has changed drastically and now we are almost overwhelmed by great stuff to read, watch, listen to and enjoy.
2 x
Dutch

English versus Dutch in education in the Netherlands and Belgium

There seems to be ever increasing concern that the Dutch language is being replaced by English in the education systems of the Netherlands and Belgium, especially for science education in universities. At the Master's level, and especially for PhDs, not only are the research and dissertations in English, but essentially all of the instruction is conducted in English. Presentations by researchers at international conferences are increasingly and overwhelmningly being done in English. So to be competitive in research and in the international job market, doesn't it make sense to get educated in English? Some say that being instructed in higher education in a language other than your mother tongue (in this case Dutch) puts students at a disadvantage. They don't understand English as well as Dutch. Most of their instructors are teaching in the instructor's second language. The fact that English is so widespread in university instruction in the Netherlands and Belgium makes it easy to attract thousands of international students, providing a very significant income stream for universities.

There are tons of articles on the Internet in Dutch about this situation. Here are three:

Is the Dutch language deteriorating? Should English be established as an official second language? Should there be laws about how much instruction schools and universities can conduct in English? What is the effect that TV, movies, books, the Internet, education, etc. is having on how quickly English is becoming a lingua franca in Dutch-speaking countries? What does the future hold?
2 x
Dutch

I am continuing through my courses, reading children's books, and watching nintje. So, a mix of native content and coursework. Tomorrow, I have to really work on my presentation for my class.

I have managed to keep up with the 365 day challenge, but many days I only manage the 30 minutes. I did sign up for the 6WC with Dutch.
2 x
Corrections are always welcome.

This book looks really interesting, thanks for mentioning it.

How do you know if a word is a basiswoord or a vervolgwoord? I had a look at chapter 6 and somehow I didn't see any distinction between different categories.

I have a similar bilingual book sitting on my shelf: Beyond the Dictionary in Dutch by Donaldson. It gives you an English term and then explains the different options you have for expressing it in Dutch. In my opinion that's really helpful if the dictionary contains a lot of options and I'm not sure which one to choose or if they are really synonyms.

Since I can't find any example pages online, I'll include two smaller entries from the book in my post. 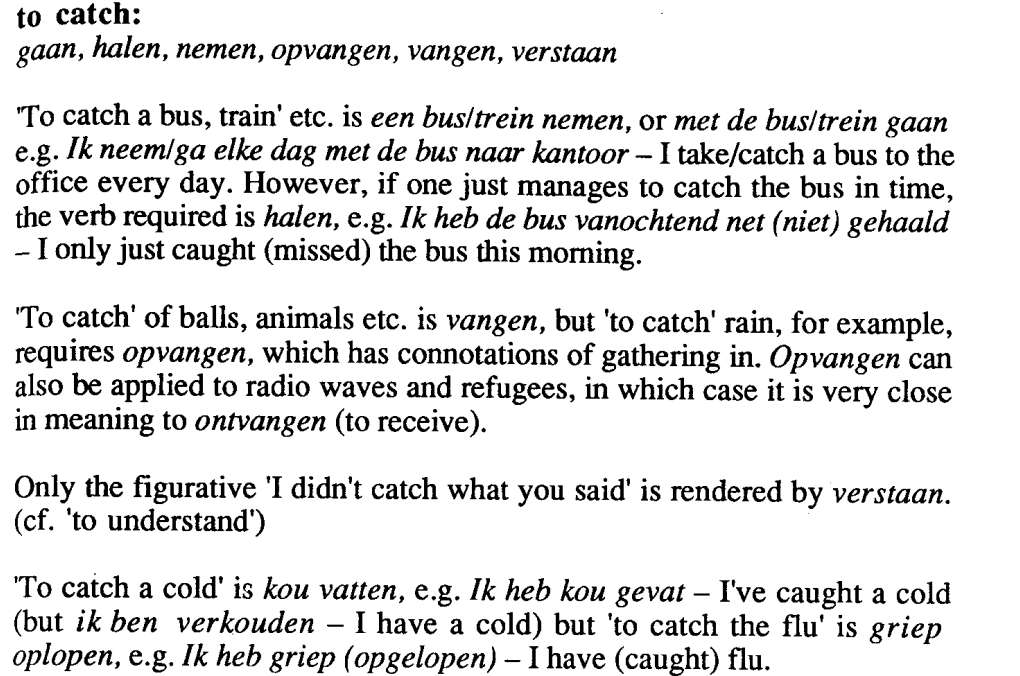 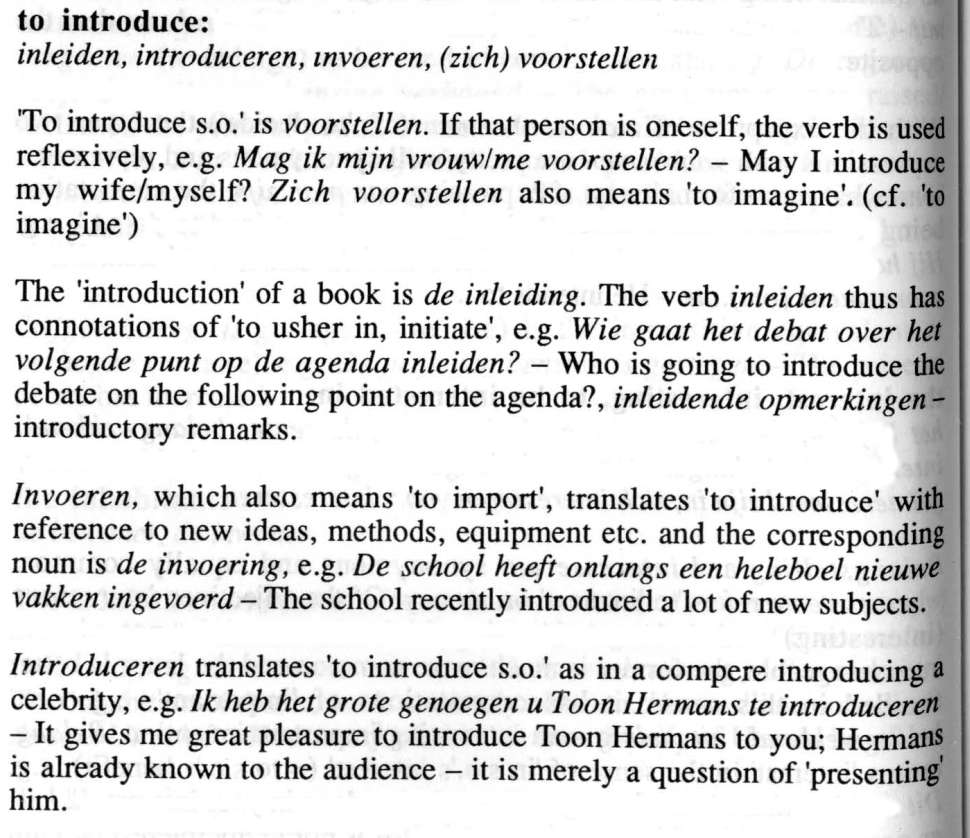 This book looks really interesting, thanks for mentioning it.

How do you know if a word is a basiswoord or a vervolgwoord? I had a look at chapter 6 and somehow I didn't see any distinction between different categories.

It describes the system in the introduction. Basiswoorden have a white background (elementaire woorden also have a dot beside them), while vervolgwoorden are highlighted in blue.

3 x
All comments and corrections welcome.

Both of those books look great, and I was surprised to find out that I can get both of them through USA Amazon. I'm a little hesitant on the Thematische woordenschat Nederlands voor anderstaligen because the ISBN doesn't match the ISBN on bol.com, and Amazon lists the language as Dutch/German. But the covers and title match. Well, it appears to be readily available, so I might take a chance on that one at a later date.

I went ahead and bought Donaldson's book, because the price is only reasonable if you buy used. I figured I might as well order a good used copy when it is available - these things come and go!

Thanks for the recommendations!

I decided to do my little presentation on the city of Leiden. I'll take a guess that trui would agree with me that it is a wonderful city

In putting together my piece, I used this website: Muurgedichten Leiden. For those who don't know, Leiden has these amazing wall poems strewn throughout the city. You can sort the poems by original language on the site. And you can listen to the poem read aloud in its original language as well as read translations into Dutch and (sometimes) English.

ETA: Here is a link to the list of Dutch poets.
3 x
Corrections are always welcome.

Elsa Maria wrote:ETA: Here is a link to the list of Dutch poets.

There is an excellent source of Dutch literature and poetry at:

This site offers a wide variety of new and historic literature and poetry, as well as lots of current items of interest about the Dutch language. I am not much into poetry, and I find historic Dutch literature to be interesting but somewhat counterproductive because of the rather different spelling. My favourite contributor on the site is Marc van Oostendorp. He has a great sense of humour and has lots of video/audio etc. on YouTube and documentaries.

You can get a comprehensive daily newsletter via email from Neerlandistiek which invariably includes poetry and a good variety of items and links. You can get this free newsletter here: