This is a fantastic French course by Librairie Hachette comprised of four text books:

I am extremely impressed by the courses (having completed the first three volumes) and would speculate that all four volumes would ultimately take a student from A0 to C1. Despite all instructions being in French from the 1st volume, a motivated student can work around the instructions-are-in-French quandary by inferring from the diagrams. For the best results, I would recommend that one go through an Assimil (or two) and/or Linguaphone (or two) in parallel because when one is studying a beautiful language, why not go for broke?.

Pros:
1. Outstanding grammar explanations (looking at you, Mr. Assimil).
2. Very high quality audio (Vol 1 & 2) which makes me really wonder what happened to FSI/DLI audio files over time? Voice actors speak naturally and with faster speech than most courses.
3. Lessons are of Goldilocks-length: not so short that they make one wonder if one learnt anything (a la TYS French) and not so long as to completely strain one's attention (Linguaphone French 1971).
4. An exceptionally detailed account of what concerns France and its citizens- geography, economics, politics, religion, history and culture - particularly in the first dozen years after WW2.

Cons:
1. Those who are hell-bent on sounding as "hip" and "cool" as possible needn't apply here! These courses contain anachronistic speech.
2. Outstanding grammar explanations in French, which is a huge deterrent to anyone without any prior knowledge of the language.
3. A fairly steep learning curve that will put off all, but the most motivated of students. Vol 1 is not for your typical A0 student who is not using other courses in parallel.

I posted a snippet of the 3rd volume's preface below.

Prior to studying with Mauger Bleu I finished Mauger Rouge (I&II). Cours de Langue et de Civilisation Françaises is still in use.

Thanks for that, Reineke! Admins, please may you kindly move my post to the link generously provided by Reineke?
1 x
1. PM's acolyte shares how to teleport through 28 French courses in 6 weeks!
2. SKYNET goes online! World domination log.

Skynet wrote: ... Thanks for that, Reineke! Admins, please may you kindly move my post to the link generously provided by Reineke?

Skynet, please retain your review. I found no redundancy in your appreciation of the "Cours de Langue et de Civilisation Françaises" and, even if it there were any, it would still make for a worthy addition to the archives on these materials. Were the Moderators to severely police the comments and reviews on this forum covering language-learning materials, there would be but one thread and it would be unreadable. Even if you had attempted to search this forum for previous discussion of these materials, given the limitations of "Search" function, you would have come up either emptied-handed or would have been presented with a list of hundreds of unrelated threads, far more than it would be reasonable to read.
1 x

Unfortunately "Mauger" will net you only around 180 hits on this forum. The idea was to merge the threads. I'm moving my Mauger-related posts here. I have also included this thread in the resource area. The other thread is 80% about non-related stuff anyway.

The course has been nicknamed "le livre bleu" or "le Mauger bleu". There's also "le livre rouge" by Mauger or "Le français et la vie" which was based on the audio visual structural method. I left the book 4 of the first course... and several boxes of magnetic reels for the other course in another country. The only audio I have been able to hunt down for the second course was an online recording read by an Indian person (i.e. not the original audio). I'd love to hunt it down because that's how I learned my pronunciation as a kid.The audio for the Cours the langue... can be purchased, but not from a US IP address.

The fourth book of Le Cours... is almost as thick as the other three combined and includes mostly excerpts from literature and texts about French culture and civilization. The book also features occasional short grammar pointer and questions about the text. The course is excellent.

Grammaire Pratique du Français dAujourdhui, also by Mauger is an accessible French-only grammar. It's not a part of the course but they may have been selling it back in the day along with the course.

"Cours de Langue et de Civilization Françaises I is one of the most classic classroom texts used for French language learning. Designed to bring French to the whole world during the heights of its popularity, it aims to instruct the students entirely in French.

The pictures are hand drawn with black and white photos and are reminiscent of World War II. I find this delightful since it really feels like you’re stepping back in time to old world France.

If you are a high school teacher contemplating this text, keep in mind your student population. There are no colors, no graphics, and nothing that might capture a student’s attention.

If you can get past the layout of the book, it actually does a good job of delivering the material. Even if you don’t understand a speck of French, the grammar explanations are well illustrated with examples so you can grasp the concept without understanding the whole French explanation. However, everything is completely in French so this can be overwhelming or a welcome challenge. You decide.

If you were learning by yourself, you would need some kind of tutor to guide you through as there is no audio to check your pronunciation and the book asks for a lot of language production, which you’ll want someone to verify. The book does provide some pronunciation keys, however, they are written in the linguist phonetics of dictionary entries.

Fifty years ago this book was revolutionary and praised as one of the best language learning resources of its time. Given the changes in student attention span and interest since then, I would say that while this book is good at what it does, what it lacks in “attention-getting” will ultimately negatively affect student interest in the classroom.

If you’re an independent learner and looking for a book you can sit down with for 15 minutes a day and pick up something new, this is not the book for you. This is more intense, for a more serious language learner, one that doesn’t mind sloughing through a book entirely in French. That said, if you have a guts to stick it out, this book would definitely help you on your way to French acquisition."

An intro to Mauger's Cours... If I'm not mistaken the audio is available for purchase.

A decent course. In 2003 a Russian publisher apparently published a Russian-based version of this course.

Le Mauger Rouge ( Le français et la vie, 1972) is a serious audio course. There are plenty of books available for purchase but no audio. Worth preserving.

The audio of the first two volumes is available on YouTube. I don't know if it is authentic, legal or complete. Just to let you know.
2 x

The audio of the first two volumes is available on YouTube. I don't know if it is authentic, legal or complete. Just to let you know.

Thank you. Arnaud already let me know. The audio is not authentic.

reineke wrote:I'd like to take this opportunity to give a plug to my favorite course - Gaston Mauger's Cours de Langue et de Civilisation Françaises. Mauger's pronunciation and liaison notes are extremely helpful, and the entire course is simply magnificent. The first book follows the daily life of a Canadian family in France, while books 2, 3, and 4 progressively introduce literature, essays etc. Book 4 is practically all literature. I believe the course to be among the best ever conceived. I also don't think it to be in any sort of conflict with your two other books (Assimil/French for Reading).

I second the nomination. We used this in the French course I took last year. The only problem was that my teacher jumped around in the book so it took me a while to figure out that it was a story.

Φιλόσοφος wrote:Let's start off with what I'll be studying first this morning. Cours de langue et de civilisation françaises, by G. Mauger, produced in the 50's and updated again in the 60's.

This is what I would regard as a paradigmatic course. The manual is entirely in the target language, and the lessons are presented in progressive fashion, with discreet grammatical elements introduced one at a time, briefly and clearly explained through the use of examples, and illustrated by a reading passage. The reading passages are structured too to present vocabulary thematically, for example articles of clothing, parts of a house, etc. They are also connected. In the first volume, which I'm currently reading, we follow a Québécois family that moves to Paris.

On the introduction it is stated that the course is hoped not only to guide the student in the acquisition of a language that will aid them in practical circumstances, but that it will also be their introduction to French civilization and culture. The course spans four volumes (the last of which, devoted to French literature, is impossible to find new or used), and takes the student all the way from beginner to advanced.

As a native speaker of Spanish I discovered that the advanced stages of learning French are much easier than it was to pick it up initially, as they are essentially the same language, only seen through some kind of diffractive medium. After having completed Assimil's French without Toil and New French with Ease, followed by Living Language's Ultimate French: Advanced, I was in a position to pursue directly French literature and books on history and other academic subjects, however I had already bought the first three volumes of Mauger's course, so I decided to use them to fill in the gaps in my vocabulary as well as for additional reading practice. I'm very glad I did, for not only are these manuals very thorough, substantive, and well prepared and structured, they're incredibly charming and enjoyable. Their quaintness makes them so much fun, they transport the reader to another era. They're without doubt much better and preferable to anything I have seen that has been produced since.

I suspect that the audio portion is around 30 hrs long. A native speaker was able to read through the first two books in under three hours (on YouTube).

Mauger Rouge is a second-generation audiovisual course (more modern than the FSI courses that are now in public domain).
The course is less dry and than the FSI material I have sampled so far but it's still somewhat dry. The course is held together by a thin story about an Italian living and studying in France. No worries, he does not sound Italian at all. The introduction deals with phonology. This introductory part is not very long but it's certainly longer and more focused than what I've seen in most English-based courses (FSI excluded). 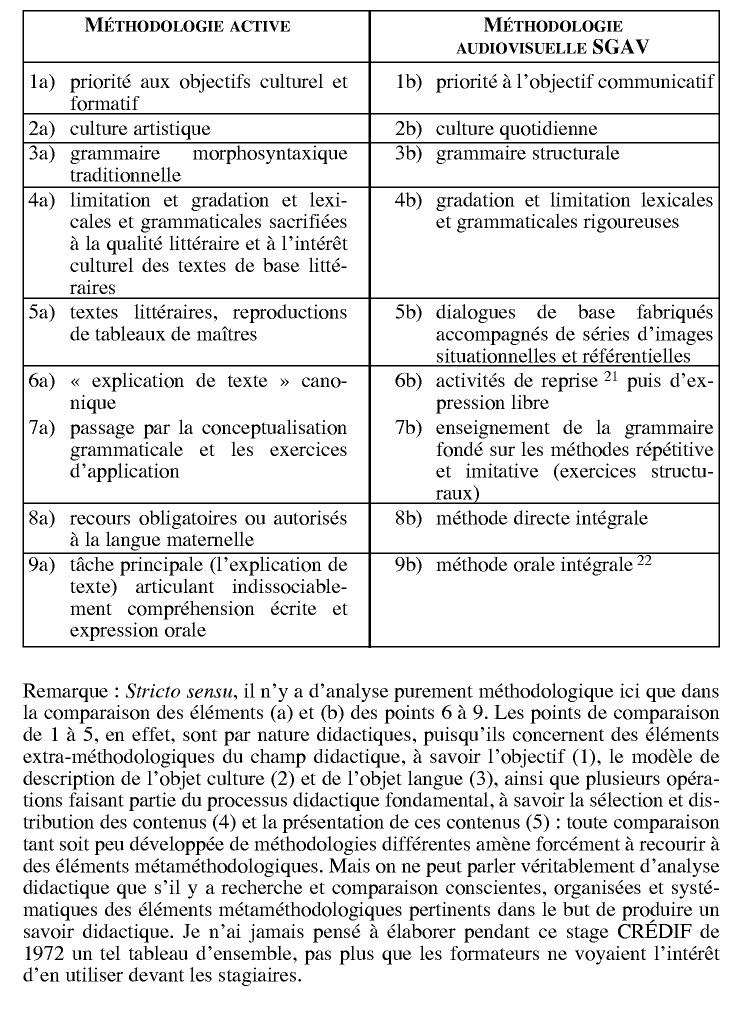