An area with study groups for various languages. Group members help each other, share resources and experience. Study groups are permanent but the members rotate and change.
Post Reply
187 posts

Hi everybody and welcome to the Study Group for Classical Languages !

What is this group?

This group was originally intended to be a study group for Sanskrit only, but after some interesting posts by aravinda and iguanamon on the matter, I decided to make it more inclusive. I would especially like to highlight the following post by iguanamon, which was originally posted in galaxyrocker's log:

iguanamon wrote:Perhaps one of you should start a "Rare/Classical Languages Study Group" and make it as inclusive as possible outside of the existing study groups. I think you would find that it would generate quite a bit of activity and would be a good place to share resources, techniques and tips. In addition, it would be a good place to talk about and learn from frustrations other like-minded people have with learning rare and classical languages without ideal resources.

Following this advice, I founded this group hoping that it might indeed generate some traffic and interesting discussion.

Which languages are included in the group?

The group is aimed at students of classical, that is "dead", and rarely studied languages that aren't spoken any more and can only be studied through their literature:

Anyone studying a classical language can join! This is a place to ask questions, share resources and fun facts, and discuss the study of ancient languages with other people.

As an example for the kind of stuff that could be interesting to members and readers of this group, I'd like to post the following video with the beginning of Homer's Odyssey in reconstructed Ancient (Homeric) Greek pronunciation (the readers of my log already know it). Maybe, it can also serve as some kind of motto for this group:

Also interesting, and even older, the beginning of the epic of Gilgamesh in Ancient Sumerian:

Well, I'm in. I've got pretty decent usage of Latin and Ancient Greek (some actual Ancient, as well as Koine, but struggle with Homeric), and I've got continually dying and resurrected Biblical Hebrew (depending on where the cycle is). My Latin and Greek are probably better than when I was examined, my Hebrew is definitely worse.

I can get by in Old English (sort of) and Middle English (pretty well), as well as Middle High German (not bad) and Old High German (atrocious, but not opaque); I don't actively study any of these right now though.

I'd love to pick up Aramaic, but I've got to fix my Hebrew, which I actually need, first.
1 x

I flirted with Classical Greek and Latin in the summer of 2017, and studied Old Irish at university in 2014. Who knows, maybe we read some short texts in Classical Chinese during my Chinese years at university...

Thank you, Josquin for taking the initiative and creating this group. I would also like to thank iguanamon for his kind advice and n_j_f, galaxyrocker and others for their interest in a group like this. I'll post some of my favourite classical language resources later.
Until then, following Josquin's example, here's a Sanskrit song. As it's an invocation to Sarasvatī, the goddess of arts and learning, I think it's quite appropriate here. This popular song is not considered a religious song and doesn't follow the traditional iconography. It's frequently performed (usually accompanied by dance) at the inauguration of arts and literary events in Sri Lanka. Though produced for a Sri Lankan audience, its lyrics are entirely in Sanskrit. It was written by late Shri Chandrarathna Manawasinha and is sung by the great Sinhalese singer late W. D. Amaradeva. Sorry, I couldn't find a good quality video of a dance. Jagan Mohinī means Enchantress of the World. It's a celebration of her beauty and grace. Try catching some Sanskrit words (for parts of the body)! 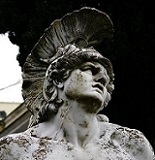 Up Next:
Persian, Russian

On the back-burner:
Turkish, Irish

Although I finished Latin I at Schola Latina Europæa & Universalis last year, I haven't so much as glanced at my Desessard Latin since then and forgotten just about all of it. In the past, I have dabbled in some Ancient Greek, Ancient Egyptian and Sanskrit and I would also like to study Old Church Slavonic, Pali and Tamil at some stage in the future.

Aravinda and I have corresponded on several occasions about starting a study group around the Cambridge Introduction to Sanskrit, although I would also be keen to incorporate Assimil Le sanskrit as well which is conveniently broken up into a hundred small, easily-digestible lessons.

Would anyone else be interested, keeping in mind that the pace may be slow as we both have other language that are being actively studied?
3 x

Considering that I've mostly been dabbling in various classical languages for the past two years now, I guess I should probably join

Currently focusing on Biblical Hebrew while dabbling in Old Japanese and Old Church Slavonic on the side, with Classical Syriac and Classical Sanskrit lined up next.

Okay, for some media, here's a choral arrangement of an excerpt from the Vita of Constantine the Philosopher (a.k.a. St. Cyril) where he argues against the exclusive use of Latin, Greek and Hebrew in church rites. The video was originally posted in another thread by Delodephius, who unfortunately hasn't been active on the forum for more than a year now. The singers' pronunciation here is strongly influenced by Czech, but most of the relevant phonemic distinctions from OCS are observed.

Next, a song based on a Sanskrit mantra in a Chinese pronunciation.

Awesome! Welcome to the study group, systematiker, aravinda, and vonPeterhof! I'll add your names with your languages to the group roster in the first post. Please check whether everything's correct.

@jeff_lindqvist: You're always welcome to join! Didn't you do some Old Irish some time ago? That would work for the purpose of this group as well. Anyway, it's of course totally up to you, but we'd be glad to have you.

@n_j_f: This group was originally intended as a study group for The Cambridge Introduction to Sanskrit, but after some input from aravinda and igunanmon, I decided to make a study group for all classical languages out of it. We can discuss the CIS here, if you like (In fact, I'm using it right now. I'm already on lesson 8). Of course, you can also start a separate group if you'd prefer that, but I'd like giving this group a shot first. If you'd like to join, just say so.

Josquin wrote:Didn't you do some Old Irish some time ago?

Yes, I did (and I also mentioned it in my post above).
0 x
Leabhair/Greannáin léite as Gaeilge:
Ar an seastán oíche: Oileán an Órchiste
Duolingo - finished trees: sp/ga/de/fr/pt/it
Finnish with extra pain :