An area with study groups for various languages. Group members help each other, share resources and experience. Study groups are permanent but the members rotate and change.
Post Reply
48 posts

It's been so long since I have actually typed Slovak out on a laptop that it was a major struggle to remember which accents went where! Anyway, I'd be very happy to have some study-buddies in our quest to conquer the Czechoslovak beast. tak čau !
2 x

Czech School Without Borders, London is looking for volunteers

Czech School Without Borders, London is looking for volunteers to fill the positions of Teaching Assistant.

Are you fluent in Czech and free on Saturdays?

Czech Centre, the Czech government agency for cultural diplomacy based in London, offers a range of unpaid volunteering opportunities. Whether you have specific skills you want to develop or just want to meet people and work in an interesting environment, come and join us!

The only prerequisites are to be enthusiastic, reliable and committed to help making Czech Centres events and campaigns promoting the Czech Republic in the UK even better. No amount of time is too small and we very much appreciate all your help.

Hummm... I guess I qualify for this group now. I'm collecting lots of resources in my new FLC log.
0 x
Anyone who thinks assembly language programming is difficult, obviously hasn't used Rust.

Hello everybody! I am also learning Czech at the moment.
1 x

You guys need a little break from all the hard work going on here.

I'm not a formal member of this group, but I was tricked into learning a little bit of Slovak when the gatherings kept returning to Bratislava. And then I was tricked into adding a little bit of Czeck studying when the last gathering became irrelevant to me and I replaced its activities by visits to zoos in Eastern Czechia instead. And then I had also booked a few days in Lviv in Ukraine (and I bought a good dictionary there) and I returned home through Poland so now the situation is that I'm more or less working simultanously on more or less the whole gamut of Slavic languages, which is a big gulp and completely impalatable for anybody with less skills than a Hale or Mezzofanti or Krebs. As the Mythbuster guys always said: don't do this at home - well, actually you shouldn't do it anywhere. One or two Slavic languages on the workbench at any one time ought to be enough - but I was just tempted into attacking the whole bunch in parallel.

Still I do feel that I'm making headway at least on the passive side: I'm almost able to read Wikipedia articles in most of the languages, and I'm making progress with thinking in them - though not to the extent that I can keep a discussion with myself running without looking things up along the way.

The picture below shows the Paraguayan dictator and would-be general Juan Solana Lopez, who thought it was a brilliant idea to attack Argentina, Bolivia and Brazil at the same time - it wasn't, and his country only survived because the other powers judged that it would be practical to have an impotent buffer state to separate them. I somehow feel I'm in the same situation... 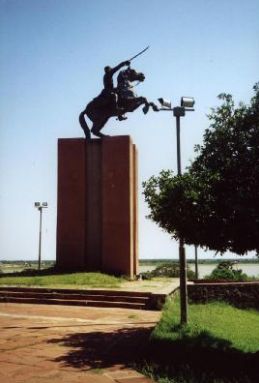 reineke wrote:You guys need a little break from all the hard work going on here.

A great song, I agree. It's just not in Czech or Slovak (just to not confuse people and create too high expectations concerning local contemporary music. The closest thing we had to this was Čechomor, which was tackling some traditional folk songs in a modern way. They were good, not sure whether they still exist.). If I'm not mistaken, it is in Rusin (language the minority at the very east of Slovakia, that was taken away from Czechoslovakia many decades ago).

Iversen wrote: don't do this at home - well, actually you shouldn't do it anywhere. One or two Slavic languages on the workbench at any one time ought to be enough - but I was just tempted into attacking the whole bunch in parallel.

Yes. I have no clue, why so many people are trying to attempt several slavic languages at once, or taking mutual intelligibility as their n.1 criterion for choosing. Or some even take up that crazy interslavic thing (I don't like it, because it might take away even more light from the natural and already understudied languages).

One slavic language can give you as much fun and benefit as any other language of a similar size. Even if you get tricked into learning just Czech or just Slovak (or just Polish/Croatian/...), you will have enough to do and you will get tons of value for your efforts. If Iversen finds it challenging to learn the whole group, most normal people really should opt for one or two

I don't really do group learning very well, so I'm not sure if I'm a suitable member, but I'll post here just to wake the thread up again. I think I have seen at least one person apparently currently learning Czech posting in another part of the forum, maybe they will see this and post something here as well.

I made a sort of false start about a year ago, with the intention really only to get up a minimal level of "tourist Czech". I did learn a little, and then forgot most of it. My second start was also mainly with touristic intentions, and I certainly do intend to get up to at least "tourist level" for whenever we will be able to do tourism properly again. But in the meantime, I've decided to take it slightly more seriously and attempt to work through a complete course book with audio. I kept seeing "Colloquial Czech" by James Naughton (Routledge) recommended (including by none other than "Fluent Czech" himself (Anthony Lauder), so that's the one I'm going to start with. I'll probably be using the James Naughton grammar book as well in due course.

I found some quite nice Youtube videos on the "Slow Czech" YT channel recently, so I've been going through those, mostly to try to associate pronunciation with the written word (they mostly have Czech subtitles). The reason for doing that is that is that once I have a good handle on pronouncing what I see written, it's then worth starting to learn some of the vocabulary in the course book. (I don't think I can learn a word if I can't pronounce it at least half decently). And while the course book has audio (it's all online), it certainly doesn't have audio for every Czech word in the book. (It mostly only has it for the dialogue, and there is much more than dialogue in the book).


I will also from time to time be checking out the great lists of resources in the official resources page on the forum, and the Czech language profile.

I'll probably restart my log (or better, start a new one), and most activity will be recorded there (hopefully), but I'll come back here from time to time.
4 x
Radio Cymru am byth!
Post Reply
48 posts