An area with study groups for various languages. Group members help each other, share resources and experience. Study groups are permanent but the members rotate and change.
Post Reply
662 posts

Spoonary wrote:In all the time I have been studying Spanish, I have, almost exclusively, focused on peninsular Spanish, having been taught this variety of the language throughout my formal education. I then started watching Spanish TV and listening to podcasts from Spain. Therefore, the Spanish I speak - my pronunciation and vocabulary choice - has always been essentially Spanish.

However, the more time I spend with my Argentinian tutor, watching/listening to media from Argentina and learning all manner of Argentine vocab and turns of phrase, the more chance this has of influencing the way I speak Spanish. I don't see any problem with this; in fact, I am having a great time enriching my vocabulary use and knowledge of Spanish as the widely-Spoken language it is. Plus, I don't think my 'language core' (to use Luca Lampariello's term) will be affected; I can't see myself switching to using seseo and voseo any time soon.

The problem arises when I start to think about aiming for some sort of 'near-native' level of Spanish proficiency. Can I really do that if half the words I use are Spanish and half of them Argentinian or from some other country? Does it really matter, given that I am not living in a country where Spanish is spoken natively and I am definitely still English, no matter how good my Spanish gets?

I dunno, what do you guys think? Has anyone had any experience diversifying or completely changing the Spanish (or any other language) accent/dialect they use?

I guess these are the things I think about when I can't sleep.

Other than a Colombian tutor I worked with for a few years, almost all of my Spanish has been of the Mexican kind. As many already know, I decided in January that I would take the DELE exam, which means I have no choice but to expose myself to Castilian Spanish.

During the last 7-8 weeks, 90% of my Spanish input has been from Spain. I have noticed that I will occasionally pronounce something like a Spaniard, although this is something really easy to correct and not a big problem at all. I have made a conscious effort to learn to understand as many Spanish words and phrases as I can, but I have no intention of ever using those words in my own speech. As a matter of fact, if I learn a new phrase from Spain, I make sure I look up the Mexican or Latin American equivalent right after. If I add words or phrases to Anki, anything 100% Spaniard only gets a Spanish -> English card, meaning that as long as I can recognize the word of phrase I am good. Everything else (especially Mexican words) gets a Spanish -> English card and an English -> Spanish card. In other words, I must produce and recognize the word.

There is absolutely nothing wrong with mixing and matching words from different dialects. I know many people who do this with English and it is never a problem. The only reason I choose not to do this with my Spanish is because many of the people I use Spanish with at work, tend to have very basic levels of education. Some of them speak heavy Spanglish (to the point that they occasionally know the Spanglish word for something, but do not know the English or Spanish version). Communication is key in my line of work, and the consequences of not understanding somebody can be deadly or have negative consequences. I can't afford to have somebody misunderstand me or have to think about a word I said that they didn't understand. I find that keeping everything as "Mexican as I can" is very helpful when communicating with people, and helps me from confusing myself. After all, 99% of the people I speak Spanish with are from Mexico.

Unlike James29 (who undoubtedly has a higher level of Spanish than me), I never trick people into thinking I'm a native speaker. I talk, and everyone (except for one taxi driver I had in Colombia) assumes I learned Spanish in Mexico or with the help of Mexican professors/tutors/media. (The taxi driver in Colombia thought I was Puerto Rican or had Puerto Rican parents lol). I do have a darker complexion and when I worked retail near the Mexican border, people would automatically talk to me in Spanish assuming I was of Mexican decent.
6 x
DOUBLE Super Challenge
Spanish Movies
:

Hi I just made an account. I'm in high school and planning on doing an exchange program in a year or two (in Spain) and am very excited. While I'm waiting to do that I want to improve my Spanish. I like watching shows or movies and have fallen in love with the music (would love suggestions. podcasts are cool too). Also take Spanish at my high school and use duolingo on a regular basis. What I'm struggling with is a way to practice what I've been learning. Specifically by talking in Spanish preferably with some one my age. If anyone has a resource for me to try out to meet teens (most online things I've found are 18 plus or filled with a lot of creepy people not interested in language learning) or are a teenager that would want to practice Spanish with me please reply! So glad to have found this forum.
7 x

Meg wrote:Hi I just made an account. I'm in high school and planning on doing an exchange program in a year or two (in Spain) and am very excited. While I'm waiting to do that I want to improve my Spanish. I like watching shows or movies and have fallen in love with the music (would love suggestions. podcasts are cool too). Also take Spanish at my high school and use duolingo on a regular basis. What I'm struggling with is a way to practice what I've been learning. Specifically by talking in Spanish preferably with some one my age. If anyone has a resource for me to try out to meet teens (most online things I've found are 18 plus or filled with a lot of creepy people not interested in language learning) or are a teenager that would want to practice Spanish with me please reply! So glad to have found this forum.

I've found that iTalki is loaded with a lot of younger people who are learning English and would love to help you with Spanish. However, it seems like you have to go through quite a few people until you find somebody who seriously wants to do a language exchange (many give up after a short time or aren't consistent).

My favorite site for language exchanges is on conversationexchange.com
The good thing with conversation exchange is that (I believe) you can filter your searches by age. Of course you could run into people lying about their age, but I've never seen this on a language exchange website. As always, use caution on the internet and be careful about sharing personal information.

Best of luck to you with your Spanish studies!
4 x
DOUBLE Super Challenge
Spanish Movies
:

Any recommendations for horror/detective/mystery/thriller books? Preferably by Spanish-speaking authors
0 x

Arturo Pérez-Reverte from Spain is a prolific writer who writes thrillers, both modern and historical. One of his first books I read was "La reina del sur". Yes, the book upon which the telenovela is based. His Capitán Alatriste series is set in the swashbuckling past when Spain was an important player in Europe. He has a "noir" detective series, a trilogy- "Falcó" set in the Spanish Civil War times.
5 x
The Multi-track Approach

I think we haven't posted these DELE exam videos yet

I also had a very positive experience with Arturo Pérez-Reverte. Speaking of Alastriste, I am one of at least several people who found the professional audiobook presentation to be a notable step up compared to reading the book directly. Not one I would want to skip as an audiobook. At the time, I was learning 'a diestro y siniestro' to quote an oft used collocate from the series. Not originally written in Spanish, but I also feel comfortable recommending El nombre del la rosa by Umberto Eco, if you happen not to have read it yet in another language. Matches quite well the genre that you mention.
5 x 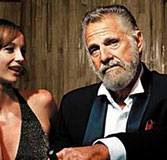 Raul Garbantes has written numerous of these types of books and Amazon has a couple Kindle bundle deals for his books. I bought a package of 10 for my Kindle for something ridiculous like $8. I've read the first three and they are all pretty decent books. I found them from others on the forum so you could probably search the forum for other reviews of Garbantes books.

I have read a ton of detective/mystery/thriller books in Spanish but mostly translations of books originally written in English. I prefer that as there is nothing wrong with the Spanish and it is pretty easy to identify books I will like. John Grisham, Jack Reacher, Michael Connolly, etc. All are great books and there is an endless supply of these types of books translated into Spanish. If you want books on the easier side of reading look for Agatha Christie, Perry Mason and I'd put the Raul Garbantes books noted above in the easier to read category.
0 x

'El cazador de estilemas'
I bought this book after I saw the interview below with the author. It turns out it is too difficult/painful to read at my current level. The subject is forensic linguistics.
I can't assess its merits, it doesn't get good reviews at Amazon.