do you recommend travelling under this pandemic situation?

This is a room for the discussion of travel plans or experiences and the culture of places you have visited or plan to visit.
Post Reply
12 posts

I was lucky to get two weeks in Southern India before corona, and I have travelled 6 weeks in Denmark in June and July, partly in hired cars and one week on a free-travel ticket which was issued to help the touristical institutions here to survive without foreign visitors. The last new thing here is that facemasks have been made compulsory in all kinds of public transportation, so I'm glad that I got most of this year's travelling done before we were forced to wear those nasty things. There has been a slight raise in the reinfection rate, but it seems to have gone down again so the situation is under control.

Personally I think that most new infections happen elsewhere so the masks are probably mostly meant as a warning to people about the horrors our government might inflict upon them if they don't behave, but in some situations where people stand or sit closely together they may NOT be totally worthless. Actually we have avoided them for a long time without being hit by heavy infection rates - and we have not been forced to sit in our flats or houses, looking out on the empty streets and only allowed to walk out once a day to buy comestibles as the inhabitants of a fair number of other countries. And because our industries and most shops never were closed down (and we had some savings to burn) our economy isn't too hard hit. It is much worse in those countries where the rulers can afford to stay inside their palaces and await the advent of a vaccine while their poor countrymen are forced to quit their jobs and sit in squalid huts and die of other maladies or starvation.

But now most things are functioning again in my own country and that has lead to a second wawe of infections, though this time mostly among younger people (from 20 and up - not so much schoolchildren as their parents), and as I mentioned above I primarily see the new rules about wearing facemasks as a tool to scare people back to the healthy distancing and hygienic behaviours that saved us in the first time. One positive thing is that the people who get infected tend to be younger and less in need of hospital treatments so our government isn't keen on doing anything that damages the economy more than necessary - so a symbolic thing like the masking is a useful tool. And the change in infection profiles might also have the positive effect that there will be fewer braindead teenagers who believe that they are immune.

As for travels to other countries: as Decidida (among others) I'm more scared of being hit by random decisions by panickstricken authorities than from being infected with the virus. We know from the first days after the partial close-down in March that it isn't necessary to lock people up - most shops in Denmark were open, and transport facilities were operating (trains, busses, but not flights), and in spite of this our reinfection rates tumbled down as fast as those in countries like Spain or France. So we know that social distancing and hygienic measures like hand sanitizers (or good old soap) and acrylic screens in shops and museums suffice to combat the pandemy - plus closing bars and night clubs and dancing establishments of course (it seems that the Swedes forgot to close those, and they paid the price). If people had been as careful about their contacts with friends and relatives as with strangers then the virus would have been history now, but even in the most severely constricted countries the retransmission rate never reached zero so god know what happened behind the closed doors. However that didn't stop the authorities abroad to lock up their populations and order industries and shops to close.

if I leave my own country I would still have to be tested, and in some places there would even be an obligatory quarantine period. And one funny thing is that if I buy a flight ticket to a quarantine-prone country and the flight actually leaves then I have NO right to a refund (so the airline would not even have to cheat me into accepting a voucher - it would be entirely my own fault if I didn't fly). With local rules that change from day to day and quite possibly while I'm on my way or after my arrival it is simply too risky to go on holiday abroad right now. 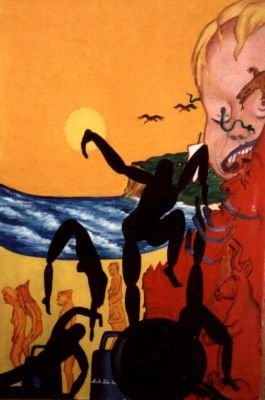 I'm planning to be stuck in California for another couple of years. The US is a political and COVID disaster. I hope we can get back... Maybe next year I will try to travel.


Years ago I lived in the Pacific islands. I remember talking to people who had lived on the same tiny island all their life. I remember someone saying that you can never completely know a place. Even on a small island there is always another angle, another sunset background, there is always something new and magical to see. I always try to see the world that way.
I remember three summers in Dublin, learning to see a few blocks of Ireland that way. I spent a lot of time in Tau, Manua doing the same thing.

Today, the little 3/4 mile of my apartment complex where I walk is that place. It is huge in terms things to learn. The rat that lives on the trash down at the end. He always looks guilty. The little bird that sings over by the big tree by the turn. The racoon that slinks away by the other end. The pack of birds that sing like crazy and then disappear later by where I park my car. The raven that curses me whenever I get back from school.

The people I see walking dogs. The woman who always smiles and waves, and I don't know who she is; maybe she is an ex-student. The cute Indian kid who never wears a mask, but looks cool riding his skateboard. The Mexican family who seems to have all their family hired to clean at our aparments when people leave. They never take off their masks, but their eyes look like they smile a lot.

It's been too smoky from the fires around us for the past 3 days to walk. Current fire and weather forecasts say that it will clear out enough to be outside tomorrow morning. I sure hope so... Today the sun was bright red, even when it was high in the sky. I want to walk again.