Shopping for language materials when travelling

This is a room for the discussion of travel plans or experiences and the culture of places you have visited or plan to visit.
Post Reply
21 posts

Re: Shopping for language materials when travelling

I've somewhat foolishly bought stuff for language learning while travelling when I could have saved some money (and not overloaded my carry-on luggage) by buying it second-hand from Amazon Marketplace or digging deeper for online sources (not pirated stuff but online dictionaries). I'm thinking especially of fairly popular works or translations such as my Czech, Polish and Turkish translations of volumes in the Le Petit Nicolas series and a couple of my Estonian dictionaries. If I had known better a few years ago, I could have picked up second-hand copies of these on Amazon Marketplace at prices similar (if not less than) what I had paid in bricks-and-mortar bookstores or just bookmarked online dictionaries respectively.

However, I've gladly shelled out for plenty of courses and reference material in languages outside FIGS while travelling since the cost as ordered online and then shipped across the ocean would have blown a small hole in my wallet and left me eating only ramen packs until my next payday. Whenever I plan to visit a large city in a foreign country, I always look up the addresses of any bookstores beforehand. My favorite has been Libra Nyelvkönyvbolt (Libra Language Book Store) in Budapest whose shelves are loaded with stock meant for language learners (and not just of Hungarian).

In addition to the usual items which are hard to find or expensive to order when living far from the country/countries where they're used (e.g. Vigyázz, angol! - az angol, ahogyan azt valóban használják - a phrasebook of colloquial English circa 2005 for Hungarians, Hovorme spolu po slovensky! B: Slovenčina ako cudzí jazyk - a set of books and audio for foreigners attending Slovak classes for B1 or B2, Język ukraiński dla średniozaawansowanych - an intermediate-level textbook with audio for Polish learners of Ukrainian), I'm happiest in a solid haul from my first few trips to Finland. 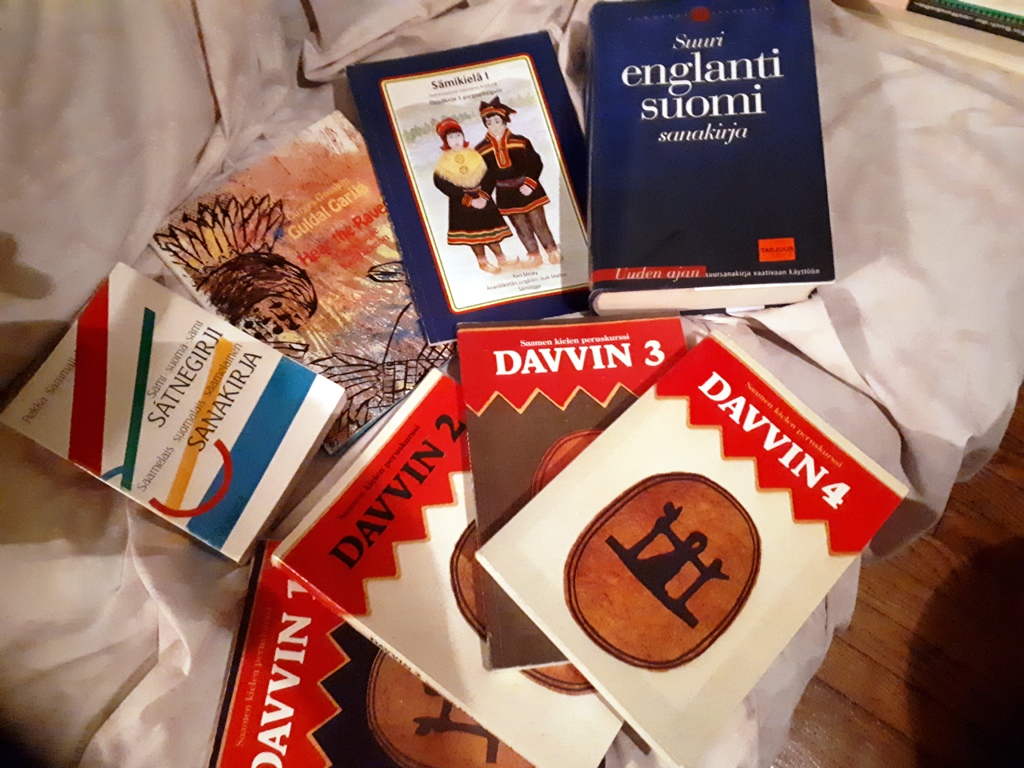 Of all the books on my shelves, these would be the ones (especially the ones I got in Lapland) I'd be keenest to keep because of how expensive they could be for me to replace.

From left to right in the upper row:
- Sámi-suoma-sámi Sátnegirji (bidirectional dictionary of Northern Saami and Finnish)
- Guldal garjjá - Hear the Raven (translated collection of Amerindian folklore for children as a dual-language book in Northern Saami and English)
- Sämikielâ 1 (children's primer for Inari Saami)
- Suuri englanti-suomi sanakirja (Large English-Finnish Dictionary - this one is special because I got it brand-new on sale for €16.70 at a bookstore in Savonlinna as suggested by the red price sticker on the lower right of the front cover with tarjous "(on) sale". The full price then was €70)

From left to right in the lower row:
- Davvin 1-4 - Saamen kielen peruskurssi (Finnish edition of the 4-part series of textbooks and CDs for Northern Saami)
3 x
Post Reply
21 posts