do you travel these days?

This is a room for the discussion of travel plans or experiences and the culture of places you have visited or plan to visit.
Post Reply
18 posts

Already bought ticket to Poland and Italy. Wonder.... was I wrong? Something to find out. Otherwise, I will be soon taking photos in Gdansk and Siena.
2 x
All the wood behind one arrow!

Internally mostly, though last summer I managed to get out of the country. I'm weighing-up whether or not to take a domestic holiday this year. There are nice places to go here, you can hire a house in the sticks somewhere for a low price.

If not I'll probably go to France or Belgium, depending on how things go. Or I might just stay at home and renovate the bathroom.
1 x
20 books for 2021:

Shoot, I haven't left the Boston area since the pandemic.

Only three states in the US have 70% of the population vaccinated https://www.bbc.com/news/57889961 I'm debating whether to visit Philly this winter, as Boston sin't holding a particular test this year. Normally I would consider traveling to the West Coast, but with all the fires, it's not worth it--we're even seeing the smoke on the East Coast. Yeah.

I'm also waiting for developments for other countries to recognize our paper vaccination cards, or for an app to verify our status. I would consider traveling to Canada, but my countries of particular interest (Japan and Norway) are closed to tourists, and probably will remain so for several more months.
0 x
Check out my comic at: https://atannan.com/

The biggest threat to tourism in the EU right now is probably not the pandemy itself, but the safeguards prescribed by diverse governments - except maybe a small number of hotspots where the infection rates are rising rapidly. Unfortunately the journalists and our ruling bodies don't seem to be able to assess the situation correctly, as evidenced by the eternal references to absolute instead of relative infection numbers. OK, if you have X hospital beds then it is important to know the absolute numbers, but the total idiocy of just looking at absolute numbers becomes clear when you see the media comparing the total number of deaths in the USA, Brezil and India - as if it was a game in the Olympics. Not only have these three countries very different population sizes, but the proportion of infection cases that get reported (and treated, if relevant) can't be the same everywhere. Even the number of unreported cases is bound to differ, but nobody knows by how much.

Here in Denmark roughly half the population have got the first jab and half of us have got the second one, and most restrictions have been abolished so we feel fairly sure to avoid a third wawe. However the number of cases found has roughly doubled through July (probably due to a combination of football and the new 'd' variant), so some people have feared an explosion. And now Germany has imposed harder restrictions on travel to and from Denmark, at least for those who haven't been fully vaccinated yet. And on the surface Germany has fewer infection cases than we do (and a much harder scheme of internal safety measures) so that should be OK, or what?

The first number to consider is the incidence, i.e. the number of found cases during a period, typically one or two weeks. But this number is heavily dependent on the number of tests, and prepare for a surprise. On the excellent page of Ecdc you find some interesting maps. There is one for "14-day case notification rate per 100 000 inhabitants", where parts of Spain and the Netherlands are very dark, Denmark, Greece and the rest of Spain are in the following bracket .. and Germany almost the whole of Eastern/Central Europe are light yellow - hurray for them. Or so it seems.

The next map shows "Testing rates per 100 000 inhabitants", and here Denmark and Greece lie extremely high - in our case because tests are free and you need to show a corona pass in many places, including restaurants and museums so people have an incentive to be tested (by the way, the offical figures don't include nose tests so the test numbers is actually at least twice as high, but positive hits aren't counted either so it doesn't matter). Austria, Czechia, Slovenia and Greece also are found in this category. But Germany lies at the rock bottom, together with Poland, Romania and Sweden. But it has to be said that differences in test 'profiles' haven't been taken into account. Maybe the Germans have found a way to excluded non-infected persons from being tested, ah dunno.

And the consequence of this is seen in that last map that shows a very important number, namely the positivity rate, i.e. the proportion of tests that are positive for covid, and then suddenly Denmark falls in the lowest bracket (in spite of the rate having gone from around 0,3 % to around 1 % during July), together with most of Eastern/Central Europa, while Germany falls into the middle bracket. In other words something seems to indicate that Germany has more covid than we have in spite of the official incidence numbers (which are very low, albeit rising for Germany). On the other hand, Ireland, Portugal, Spain and the Netherlands fall in the top bracket so unless you have been fully vaccinated you might be tempted not to go there right now - but maybe in a couple of weeks the situation has changed. I'm however somewhat sceptial about the low infection numbers in Eastern/Central Europe - how can these countries be less covid stricken than their neighbours to the West? Anyhow, this small exercise shows that our media haven't understood what the really important figures are, and it seems that governments are following in their footsteps when it comes to imposing safety measures.

And then I haven't even discussed what kind of measures are efficient and which aren't. 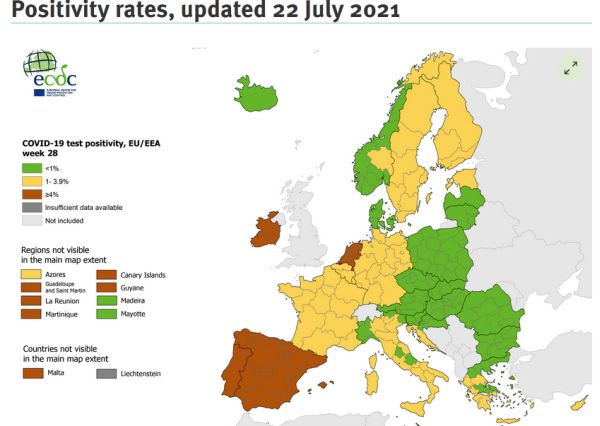 I am currently not allowed to travel further than 10 kilometres from my home. I think that’s been for a month now.

Nor leave my country without permission. I think that’s been for about eighteen months now.

It’s getting pretty boring! I was hoping to travel a lot in my retirement.

I don't travel these days. No plans to travel anywhere in the near (or even distant) future.
2 x
Leabhair/Greannáin léite as Gaeilge:
Ar an seastán oíche: Oileán an Órchiste
Duolingo - finished trees: sp/ga/de/fr/pt/it
Finnish with extra pain :

I've traveled domestically half a dozen times since October but not internationally. Earlier we thought we could reschedule our Germany trip (it was canceled last year) but there was a lack of clarity about what was required for Americans to come to Europe so we decided it wasn't worth the hassle or risk of another cancellation. Tentatively planning two trips next year (Portugal in the spring and Germany in the fall). I'm not hopeful though if the world can't get itself more fully vaccinated in the next year.
0 x
Super Challenge 2020-21:
film: books: IT
film: books: DE
film: books: FR, PT, PMS, SCN

I travel only within my country now.
0 x
Post Reply
18 posts