Is anyone else going attempt Nano this year in their target language? (For context here are some NaNoWriMo threads from past years: 2016, 2018, 2019)

Ideally we should be making preparations at this stage in the form of plot outlines, character bios etc.

This month I have no time to prepare, sadly. Right now I just have a vague idea for a mystery story (think Scooby Doo rather than Hercule Poirot). Maybe I'll go with that one. In any case, my Latin is too poor to get me anywhere near the official target of 50,000 words. I will be content to match my achievement last year of ca. 8,000 words.

For any wrimos who'd like to add me as a buddy: I am Beosweyne on the official site.
2 x
"Ghosks is jes' figamentations of the imagigamanation." — Popeye

I think I would struggle doing NaNoWriMo even in my NL, but I like the idea of writing fiction in a TL. Maybe I'll write a short story.
0 x

desperatemonolingual wrote:I think I would struggle doing NaNoWriMo even in my NL, but I like the idea of writing fiction in a TL. Maybe I'll write a short story.

Yes, I think when writing in a TL we naturally lower expectations of the quality of our prose, and this can help in writing more freely. But due to more limited vocabulary and grammar it is easier to run out of things to say in TL, i.e. fall into writer's block!
0 x
"Ghosks is jes' figamentations of the imagigamanation." — Popeye

Brandon Sanderson has a series of 'how to write a story' videos on YouTube.

I want to do this, but the only language where it's a possibility for me is Esperanto, and I've never succeeded at this before even in English

0 x
Joyo Kanji:
Language Study, Drawing, and Gaming on Twitch
Haiku and Other Tweets in Esperanto

With just 3 days remaining and still uncertain of what to write about, I take some comfort from Chris Baty's motto (he's the founder of NaNoWriMo): "no plot, no problem".

I'm not going in totally unprepared however. I knocked together some cover art using MS Paint, then added filters to create a soiled, faux antique look: 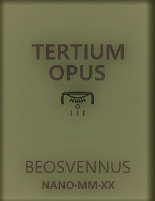 The imaginative title Tertium Opus comes from this being my third NaNoWriMo entry. Taking centre place on the cover is the Egyptian hieroglyph nbw or gold. I just put it in because it is the most beautiful and intricate of the few signs I know. I should try to work some kind of quest for gold into my storyline.
3 x
"Ghosks is jes' figamentations of the imagigamanation." — Popeye

Beosweyne wrote:I'm not going in totally unprepared however. I knocked together some cover art using MS Paint, then added filters to create a soiled, faux antique look:.

Oh, that's cool! And good luck doing it in Latin as well - I imagine that'll be quite difficult!

I'm doing NaNo (as ever) but I'm splitting my goal between a bunch of different projects (and am aiming for 100k after having a great month writing in September, which is also why I've not been around the forum a lot): I've got a translation to finish, as well as an English project (mostly unplanned but it's the semi-sequel to what I wrote in Sept); but I'm hoping to get 5k+ down in German, though I think I'll mostly focus on non-fiction essays just to break things up a little.

Will see how it goes, anyway. It's always a fun month, even if I don't win!