All about language programs, courses, websites and other learning resources
Post Reply
17 posts

I love collecting old language courses, even for language I already speak well enough not to need them. Recently, I have seen this Berlitz French course for sale online, but with a very limited description beyond the photos.

Does anybody recognise this course? I already have an old Berlitz Think & Talk French course, but the packaging is very different and it came with far fewer cassettes. Which leaves me quite unsure which course this person is selling, and whether or not I should buy it. 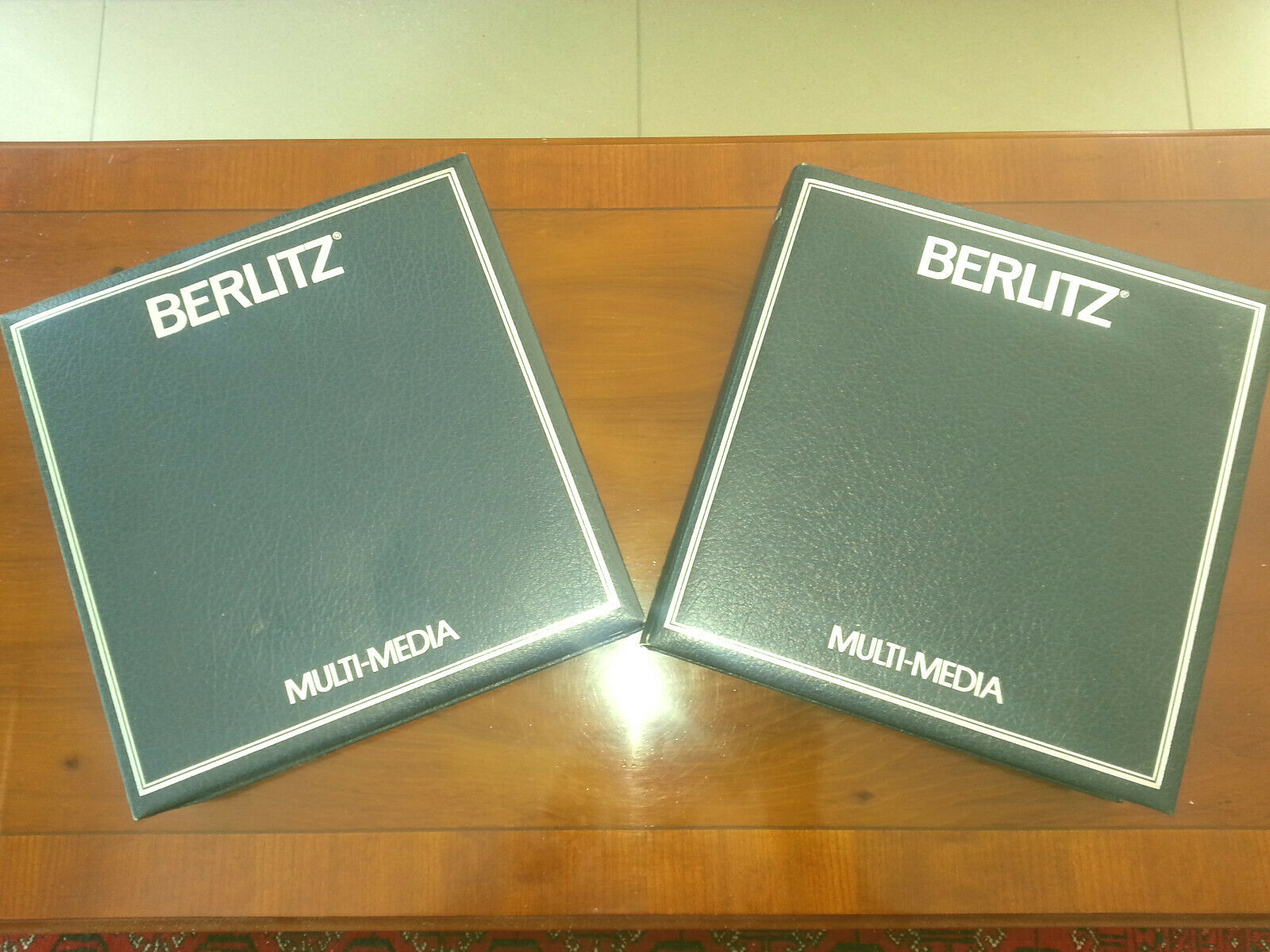 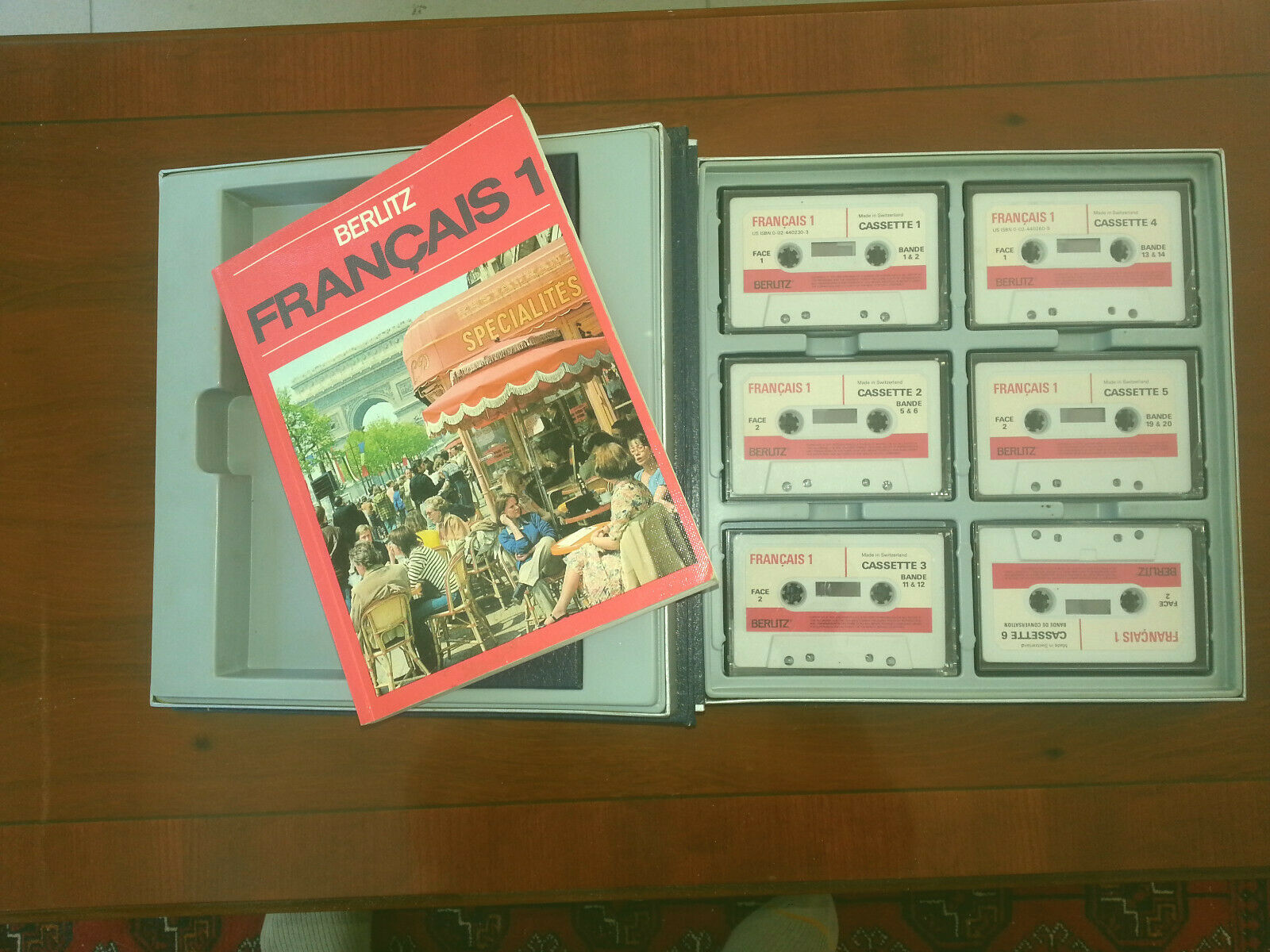 @AnthonyLauder, I searched eBay.COM and came across both the offer to which you are referring and another one for what-seems-to-be a Berlitz Spanish course from the same series. I have included a couple of images below.

The Preface implies that this series was destined for use in a Berlitz Language School: “… requires the exclusive use of the target language in the classroom …” This impression is supported by the image depicting a page from the course manual which is in the target language only. 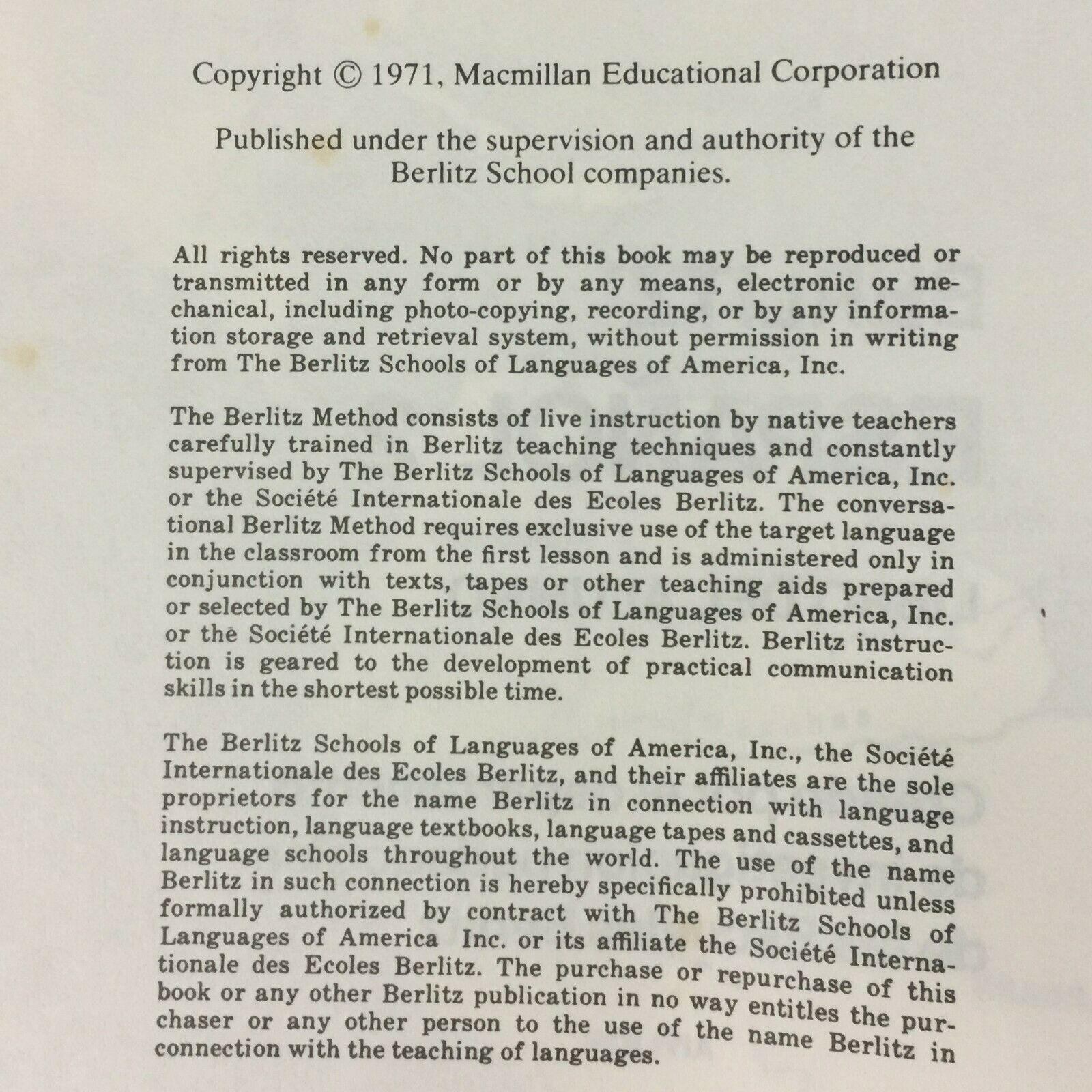 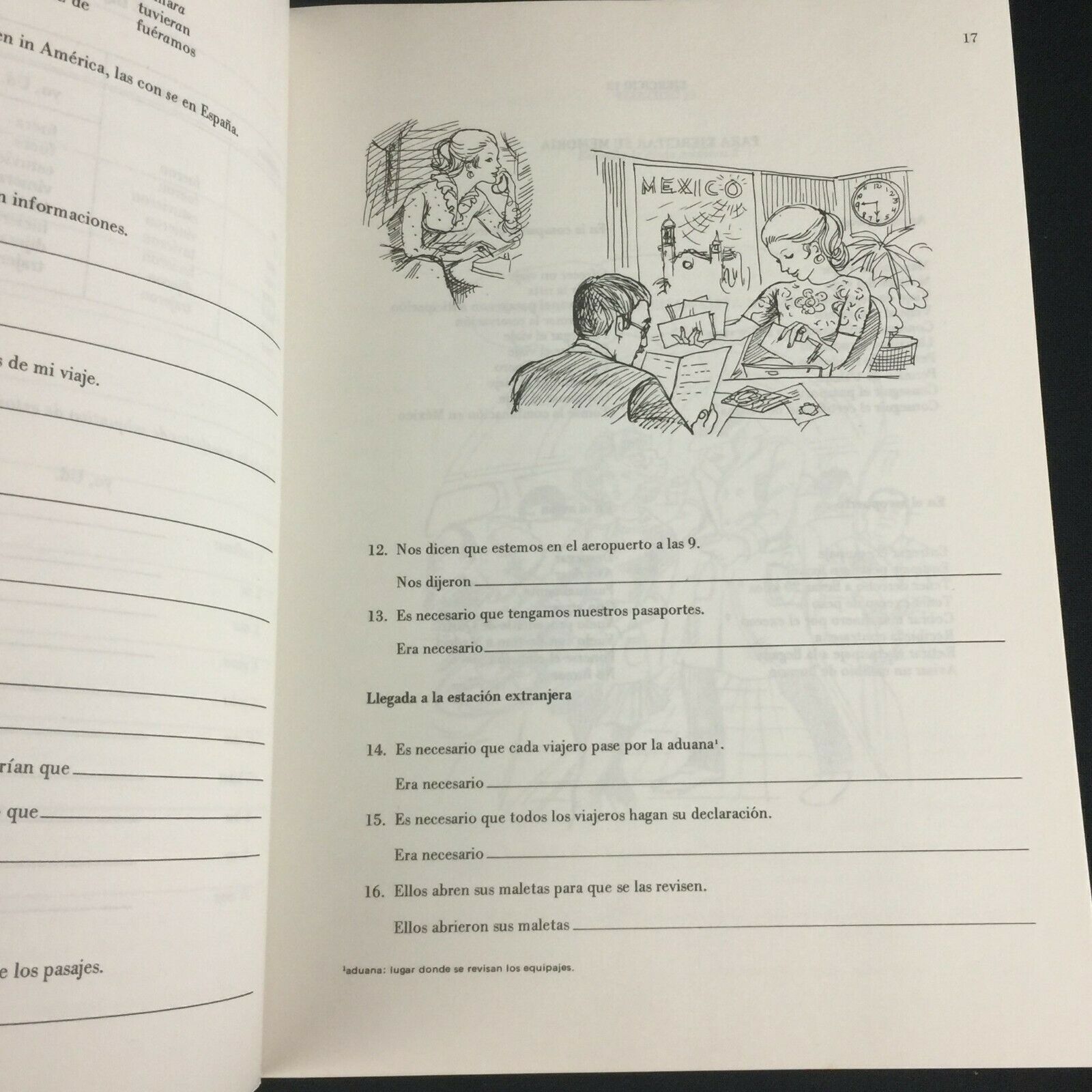 As Berlitz is known for “recycling” materials from other courses, it possible that you already have a portion of the texts and audio recordings of the Berlitz French on offer in one your other courses by this publisher. However, such a possibility would never discourage a serious collector of language castoffs. On the contrary, the thought of acquiring a repackaged version of something that one already possesses is irresistible. You NEED to purchase this course before someone else does! I look forward to reading your review of the materials.

Addendum
I prepared the above comments off-line and posted them simultaneously with David1917's post. I agree with him that there might be a link between the Berlitz French presently on offer and the Berlitz Think & Talk course. The sketches seem to have been prepared by the same artist, the textual layout is similar, and the courses have the same number of cassettes. As I remarked above, this might be yet another example of Berlitz recycling their materials. Whether or not this is the case, you still NEED to purchase this course!

I have managed to get hold of a photo of a random page in one of the workbooks from the French course that I saw for sale. It does indeed seem to be an early version of the "Think and Talk French" course, which I already own. Nevertheless, I have made an offer to the seller, and will see if he accepts.

UPDATE: The seller accepted my offer, so I am now (well, when it arrives) the proud owner of yet another vintage language course Speakeasy wrote:Working under the assumption that the revised “Think and Talk” courses were, indeed, a development of the original series, it would appear that Berlitz decided to abandon their “Direct Method” of instruction (full immersion) and to replace it with a rather conventional one, mirroring the approach of their competitors.

I reckon this is why there's so little discussion of Berlitz -- they've chopped and changed so much that there really isn't "a" Berlitz to speak about. OK, that seems like a bit of an exaggeration if you only look at the books, but if you look at the way they licensed the brand to get on the CD-ROM gravy train in the 90s, they just flat out shoved their brand on someone else's course, then (if I recall correctly) flipped and licensed someone else's radically different course several years later.

At the end of all that, you're left with no clear idea of what Berlitz is, as they now sell all sorts of different stuff under the brand, none of which has any link to the schools. It's one of the few brands I actively avoided during my excessive buying phase.
2 x

Berlitz Think & Talk: Russian/Japanese
At the time that I prepared the presentation on the “Berlitz Think & Talk” first generation courses, above, I had a copy of these materials for the study of French, German, Italian and Spanish, but not those for the study of either Russian or Japanese. Based on the materials that I had on hand, I assumed that the latter followed the same approach to teaching as the former. Some months subsequent to the above presentation, I came across this comment from March 2011 by jpazzz on the HTLAL: “There is also a Think and Talk Russian, but it wasn't produced by the Berlitz staff and has a different format. And I believe there is a Think and Talk Japanese, but I've never used it and can't comment.” Jpazzz was right!

Berlitz Think & Talk Russian
Upon reading jpazzz' comments, I purchased a copy Berlitz Think & Talk Russian. As he reported, this course was not developed by the Berlitz staff nor does it follow the same approach to instruction as was adopted for French, German, Italian, or Spanish courses in the series. Rather, it is an English adaptation of the Dutch-language-based course “Russisch: Een Taalcursus Voor Beginners” by Mirjam Ooms and Olga Tielkes, published in 1991. The materials include 2 course manuals and 6 audio cassettes, packaged in a hard-shell plastic case.

The bilingual “Study Guide” presents the target language through a series of dialogues, exercises, and radio plays which are accompanied by notes on grammar and comments on Russian culture. The unilingual Russian “Key” contains a transcript of the audio recordings of the dialogues, exercises, and radio plays. Whereas the recorded voices in the example dialogues and exercises are clear and fairly well-articulated, those in the radio plays are veiled somewhat by the deliberate inclusion of background noise (traffic noise, passers-by on the street, staff and patrons in restaurants, radio and television broadcasts, et cetera) which are meant to simulate a more realistic environment for the student. In addition, the speakers in the radio plays make few attempts at articulating their speech. The course is fast-paced, quite challenging, but of unquestionably high quality. There are more materials packed into this course than, say, the Assimil Russian course. The level on completion would be in the CEFR B1 area. Highly recommended! 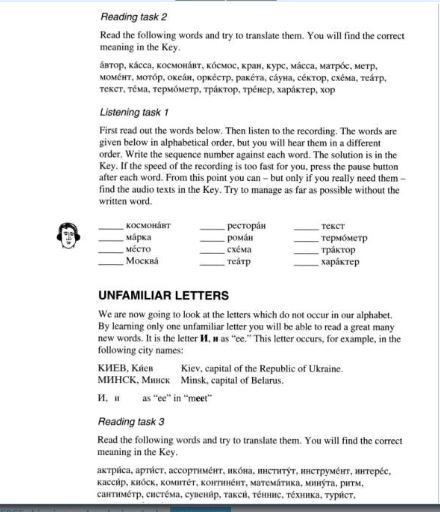 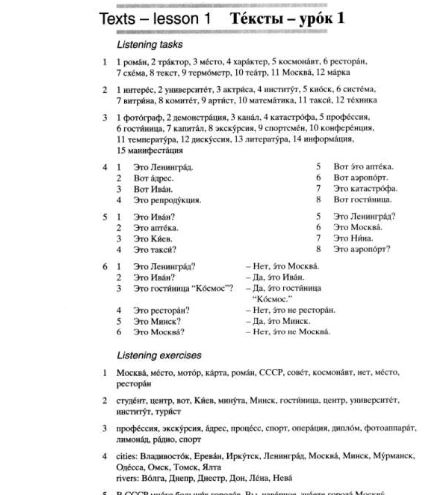 Berlitz Think & Talk Japanese
Although I do not have a copy of Berlitz Think & Talk Japanese, it is clear from the “Look Inside” images on Amazon.com that this course does not follow the same approach to instruction as was adopted for French, German, Italian, or Spanish courses in the series. The materials include 3 course manuals and 6 audio cassettes, packaged in a hard-shell plastic case.

The course appears to provide an elementary introduction to Katakan/Hiragan with a reliance thereafter on Kanji for the bulk of the lessons which present the language through situational dialogues. Ample notes accompany the dialogues. It would be reasonable to assume that the recordings are in the target language only. While I have not come across any reviews of this course, the “Look Inside” images on Amazon.com inspire confidence and, were I interested in studying Japanese, I would not hesitate in trying this course. I would not be surprised to discover that the level upon completion would be CEFR A2 or slightly higher. 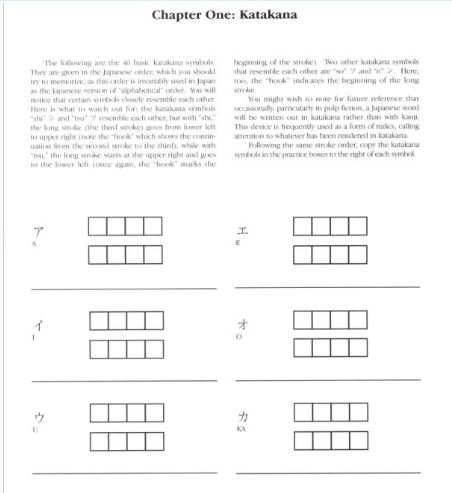 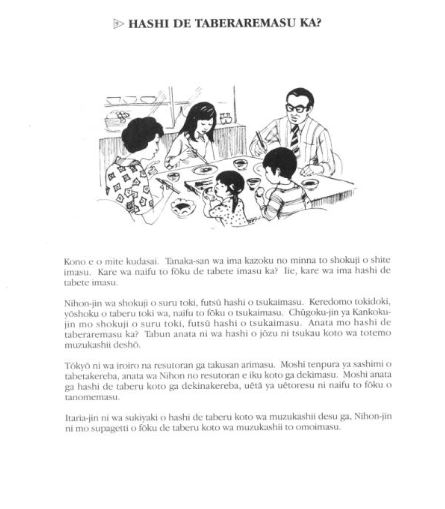 Berlitz Think & Talk: Level 2 (Advanced)
The “Berlitz Think & Talk Advanced” series was published in the early 1990’s as a sequel to the initial, first generation, Berlitz Think & Talk series for the self-instruction of French, German, Italian, and Spanish. This second series did not include either a Russian or a Japanese course as had the initial series. Materials included: (a) two course manuals, for a combined 600-plus pages, (b) 6 audio cassettes having a total duration of approximately 6 hours, 1 practice cassette for recording oneself, and (c) a hard-shell plastic storage case.

Course Description
Whereas the initial Think & Talk series employed Berlitz’ version of the Direct Method, the approach to teaching in the sequel series was, to some extent, similar to Linguaphone’s or that of many other publishers. That is to say, the target language was introduced through a conventional series of progressively more difficult dialogues and exercise sets supported by notes on grammar and colloquial usage. Line-per-line English translations such as used in the Assimil courses were not provided. However, the lesson notes and glossaries, which were comparable to those found in the Linguaphone and/or Routledge Colloquial courses, provided ample support. The images below are drawn from Lesson Four of the Advanced German course. 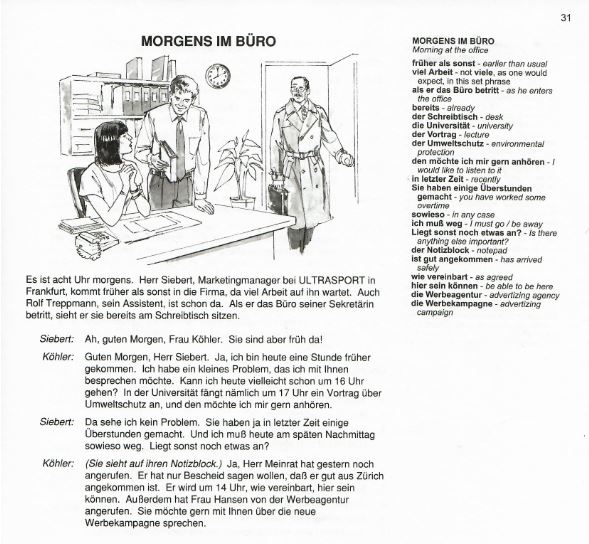 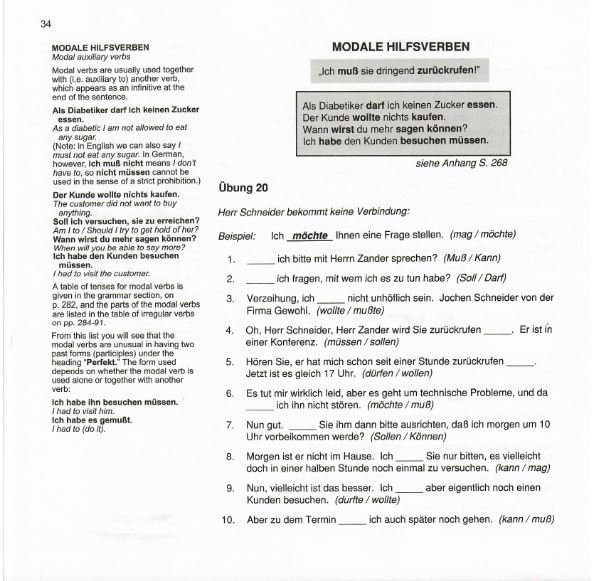 A element which surprised me somewhat was that the course dialogues and exercise sets started somewhere within the CEFR A1-A2 range without the benefit of a brief review of the basics. Thus, a prerequisite for using these courses would have been a solid CEFR A1 level at the very minimum and perhaps a level just a tad higher. My impression is that the initial Think & Talk series would have been insufficient preparation for this follow-up series. The roughly 6 hours of audio recordings of the Think & Talk Advanced courses, which are in the target language only, were prepared with the assistance of voice-trained professionals whose speech was well-articulated, but not artificially so, and whose delivery was at a surprisingly quick cadence when compared to that encountered in most commercially-prepared language courses for self-instruction. The materials presented the target languages’ structural elements and high-frequency vocabulary up to the low-intermediate level, leading to a level of CEFR B1, or slightly higher, upon completion.

Overall Appreciation: Excellent!
To be quite frank, I have never been a fan of the Berlitz self-instruction language courses. I am not saying that the Berlitz courses are poorly-conceived; rather, they have simply never appealed to me. In this instance, Berlitz’ adoption of a more conventional approach to teaching, coupled with their inclusion of a good deal of relevant material capable of bringing the independent learner well within the CEFR B1 area, would have appealed to students, like myself, who were comfortable with the works by Assimil, Cortina, Linguaphone, Living Language, and many others. Although these courses have been out-of-print for many years and copies are now increasingly-difficult to find, I would recommend them to anyone considering, say, the Assimil Perfectionnement, the Living Language Ultimate Advanced, or the Linguaphone Advanced-to-Expert courses.
3 x
Post Reply
17 posts