All about language programs, courses, websites and other learning resources
Post Reply
25 posts

How interesting, @Speakeasy! What a wonderful read.
0 x
"He's satisfied with himself. If you have a soul you can't be satisfied."
- Graham Greene (given to me by @reineke)

Um, er, I didn’t quite catch that, could you please repeat it a little more slowly?
A couple of weeks ago, I came across an offer on eBay for a collection of audio cassettes entitled “Forbidden [Lanuguage]: Foreign Words and Phrases They Don’t Teach You in School” which were published by Extra Curricular Learning, Calabasas, CA in 1992. The languages covered in the series are: Ebonics, French, German, Italian, Japanese, Russian, Spanish, and Yiddish. 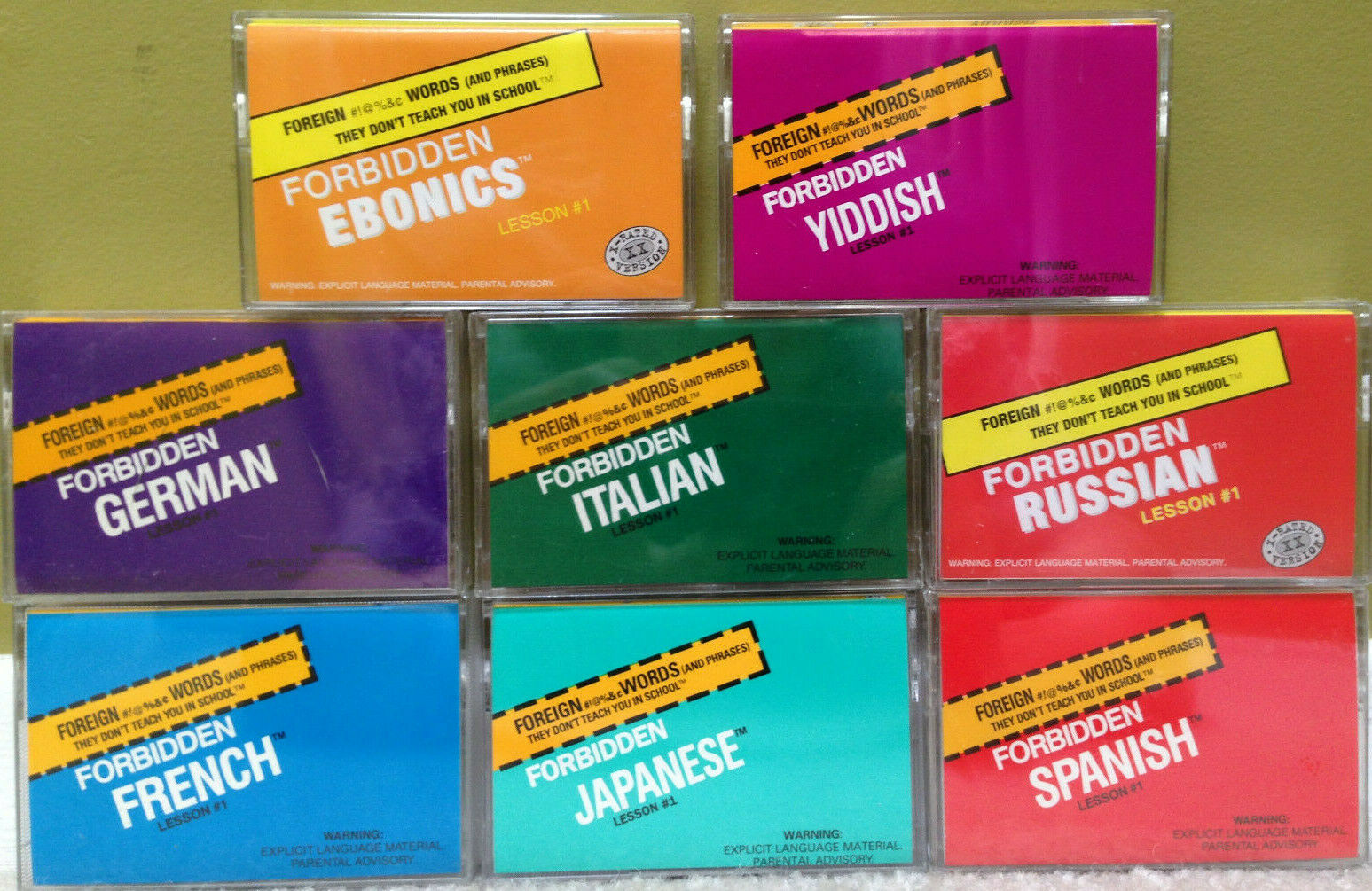 While I would generally refrain from using foul language in most circumstances, I am not a prude. So, I thought to myself: “As a collector of vintage language-learning materials, I might find these entertaining and, at price of only 9.99 $CAN for the entire collection plus free postage, how could I possibly lose?” The cassette liners contain a transcript of the L2 expressions along with a literal translation into English and the equivalent as normally expressed in English. I momentarily thought of posting an image of one of the cassette liners .. some men, even those who are in their seventies, can be boyish at times, the question is whether or not we yield to these impulses: I have chosen not to. 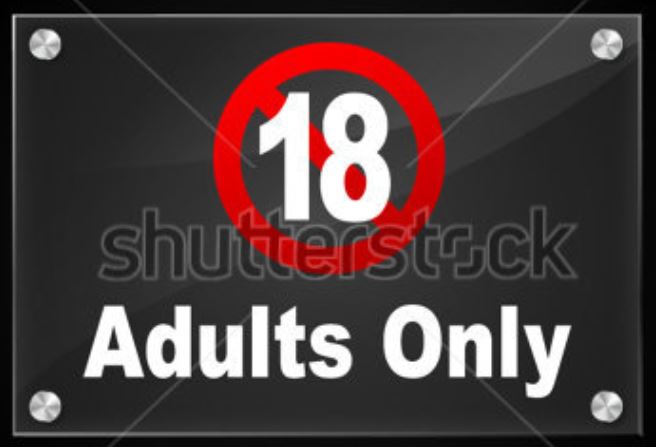 Free to good home, either individually or as a collection, but you must reimburse the postage costs. By the way, I did not even bother listening to the tapes.
3 x

Grolier Inc. / Grolier International Inc.
Grolier Inc., founded in 1909 by Walter M. Jackson (1863–1923), is one of the largest U.S. publishers of general encyclopaedias and similar educational materials. In 1988, Grolier was purchased by the French media company Hachette, which itself owned a well-known French-language encyclopedia, the Hachette Encyclopedia, and sold once again in 2000 to Scholastic Corporation, an American multinational publishing, education and media company.

Although not renowned as an editor of language learning materials either for schools or for self-study, Grolier International Inc. published “Programmed English: A Self-instructional Course” by Margaret M. Maggs, a noted educator and author of numerous works related to the instruction of English. I have not found references to any other language courses published by this company either under the Grolier name or that of its imprints Franklin Watts or Orchard Books.

Programmed English: A Self-instructional Course
Published in 1978, the popular-for-the-period “programmed learning” method of self-instruction (viz., the FSI Programmed courses) was adopted for use in this course. The materials included: (a) up to 8 hardbound volumes of texts and illustrations, (b) 16 to 32 audio cassettes, and (c) sturdy cardboard binders for storage. The uncertainty as to the actual number of volumes and cassettes is owing to a listing on WorldCat.org showing 8 volumes and an offer on eBay.com for a collection of 4 volumes which may, or may not, be incomplete. 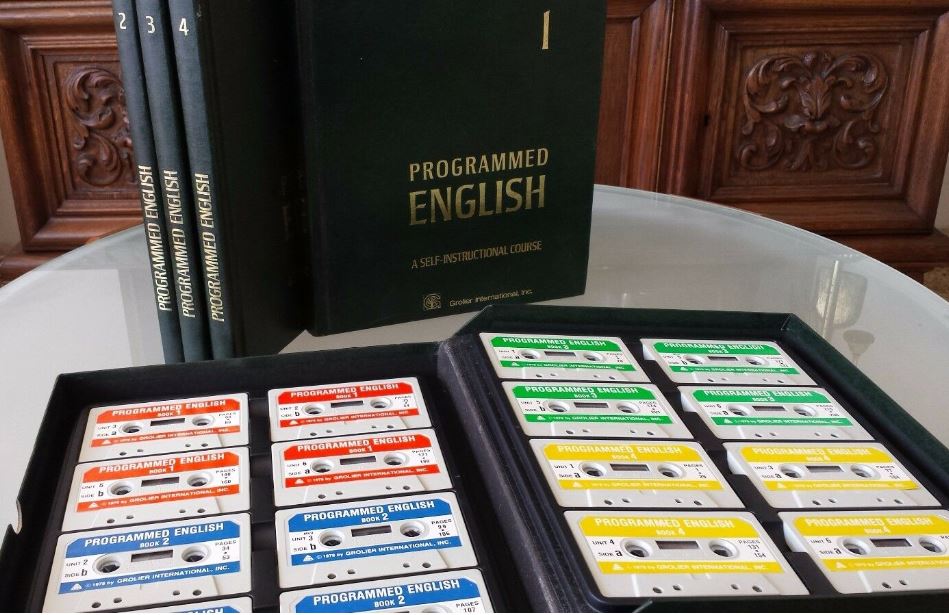 
Of considerable interest, and rather unusual for a language course, was the extensive use of illustrations, at least in some of the lessons, as an aid to learning. This may have been an effort to render the course as widely-accessible as possible to non-English-speakers. Based on the images available (see below), I suspect that this would have been an elementary course having the potential to take the independent learner up to the CEFR A1 level, but not any further. 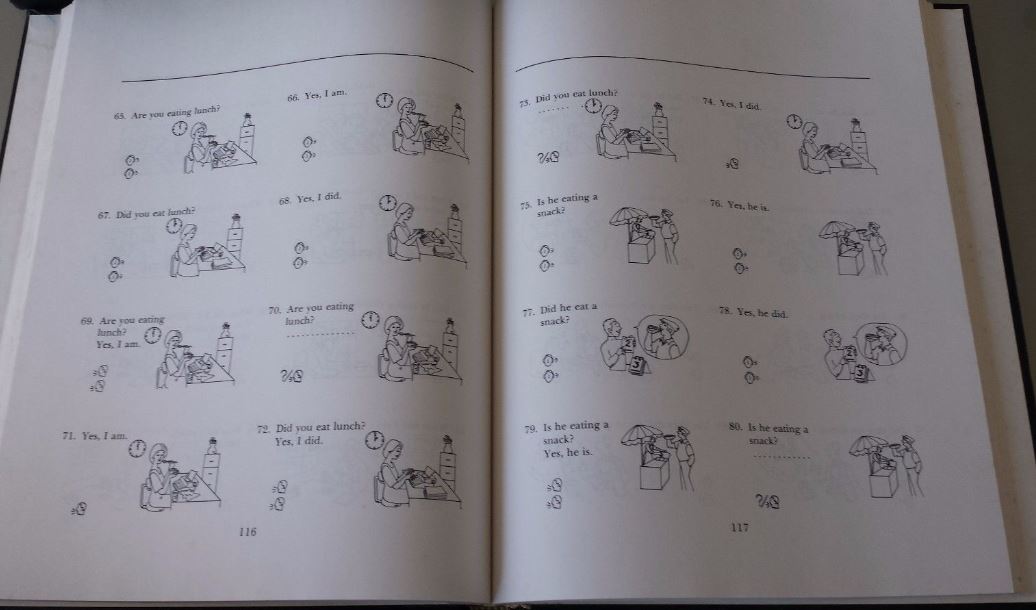 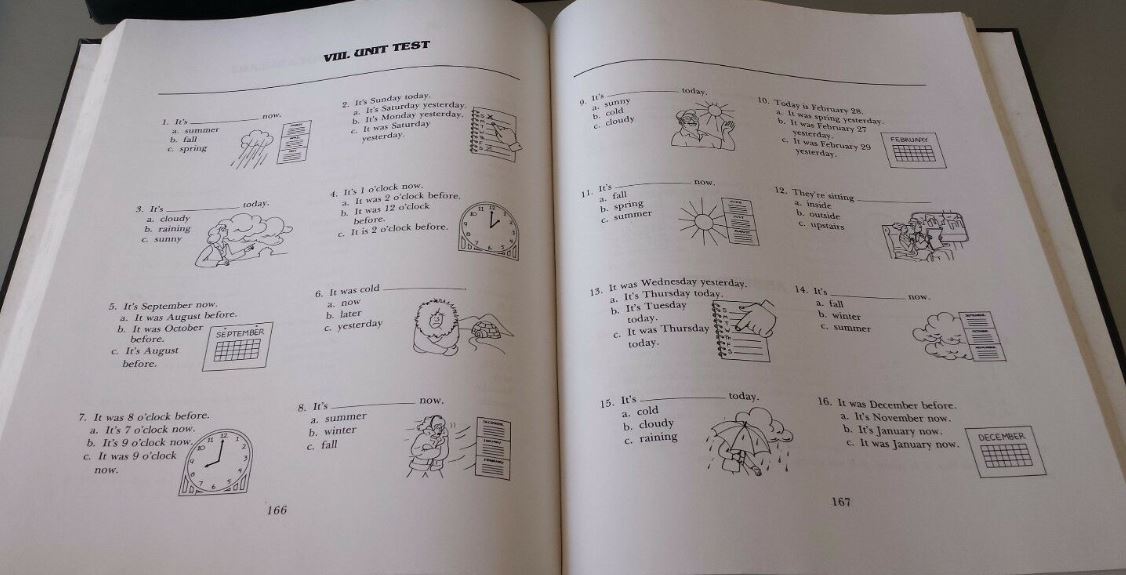 
Collectors, Start Your Engines!
Although there are a few traces of this course on the internet, there is presently only one available for sale (at the ridiculously low price of US $34.30). If I had room in my basement (or more to the point, if my wife were to permit me to make room in my basement), I would most certainly buy it. Yes, the shipping costs seem a little high, but when you NEED to possess a vintage language course, you have to ante up. Collectors, start your engines!

Conversational Portuguese in Thirty-Six Lessons by Professor Cézar Yázigi
This course was published in 1962 by the Brazilian Government Trade Bureau, New York, N.Y. As neither the course nor the publisher had any association with the myriad publishers of language courses, phrase books, and similar materials of the period, the “Conversational Portuguese in Thirty-Six Lessons”, subtitled “Course of Portuguese as Spoken in Brazil, Professor Cézar Yázigi’s Method”, is an exceptional specimen of a vintage course of lesser renown.

Materials
The course materials included: (a) one 90-page soft-bound booklet measuring 5-1/4 inches x 8-1/8 inches, and (b) four x 12 inch x 33-1/3 rpm LP vinyl records having a total duration of approximately 3 hours. A note on the final page of the booklet reads “These lessons are available on four 12” Long Playing records and information about them can be obtained at the Brazilian Government Trade Bureau”, confirming that this course was not a regular commercial venture. Oddly, the “publisher” of the LP records is indicated as “Course © 1962 by Cesar Yazigi, 500 Fifth Ave., New York” (see below). 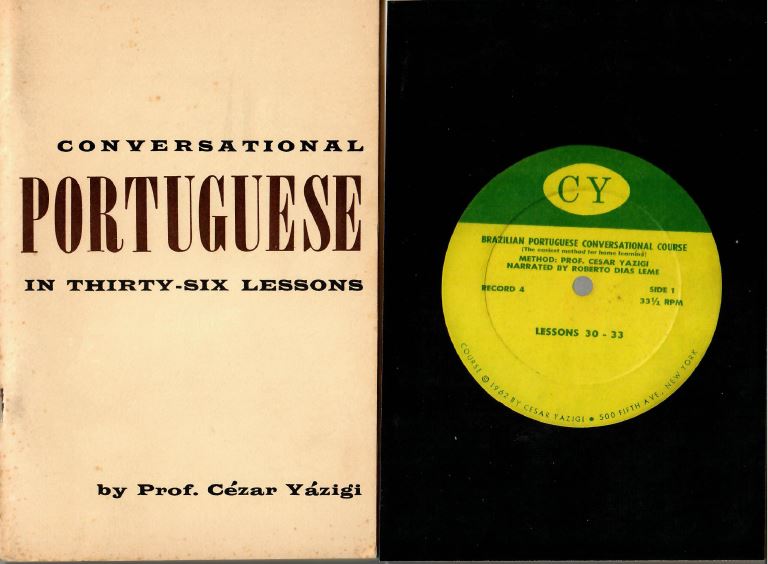 Description
The course booklet opens with a brief but well-conceived introduction to the pronunciation of Brazilian Portuguese. I was nevertheless taken aback by the introduction to this section which reads as follows: “English, as you know, is the most illogical language in the world from the view of pronunciation. Portuguese, on the other hand, is quite logical, or quite “phonetic”, as we might say …” There follows a short presentation on subject pronouns, possessive adjectives, and object pronouns.

The language is introduced through a series of scripted dialogues, lists of useful phrases and vocabularies, and L1-L2 translation exercises. The Portuguese text appears in columnar fashion on the left-hand side of the page, flanked by an English translation. Putting aside the introductory comments on pronouns and adjectives, there are no explanatory notes or comments of any kind whatsoever accompanying the lessons. There is no glossary and an answer key for the L1-L2 translation exercises is not provided. It is possible that this course (and it is a course and not a phrase book) was meant for presentation in a classroom. The vocabulary is common to that of many typical beginners’ courses; however, despite the limitations of a condensed course, most of the grammatical issues up to the CEFR A2 level are demonstrated. While a seasoned language-learner, particularly one who is familiar with related languages, would not be stumped by this skeletal booklet, a novice would have been better advised to keep a simple grammar close-at-hand. 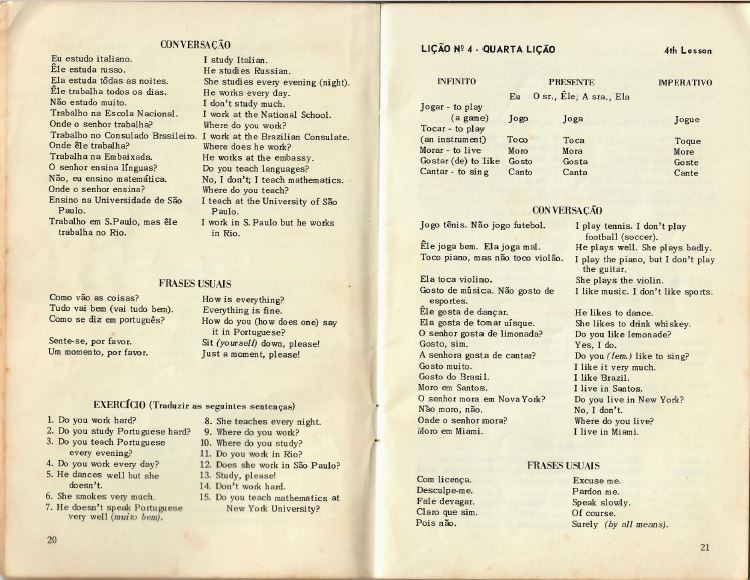 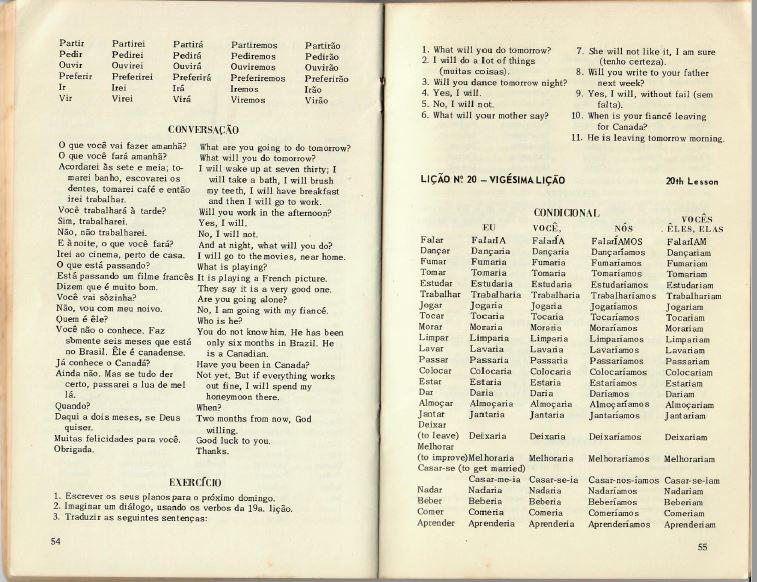 The roughly three hours of audio recordings follow closely the dialogues and useful phrases which appear in the course booklet, recorded in the target language only. The native speakers appeared to be voiced-trained, their speech is clear and well-articulated and their cadence of speech, while faster than that of the typical Assimil course, was somewhat slower than that of normal conversation.

Appreciation: Surprisingly Good!
The condensed 90-page course booklet with its accompanying three hours of audio recordings would have had the potential to bring an industrious student within the CEFR A1-A2 range of skill. It was somewhat similar to the first-half-or-so of an Assimil course, but without the notes to the user. It is hard to imagine how this course and the LP records (which were apparently available only via the Brazilian Government Trade Bureau, New York, N.Y.) were marketed or what the pricing structure might have been. At the time of its publication, the competition from Assimil, Berlitz, Cortina, Hugo, Living Language, Linguaphone, et al, as well as the hundred-odd publishers of low-priced LP language courses would have been absolutely ferocious. It is not surprising that there are few references to this course on the internet. All the same, this condensed course would have yielded pretty good results … in the right hands!
6 x

Concert Hall Society, Inc. / Concert Hall Record Club Ltd
The Concert Hall Society, Inc., was launched in 1946 to take advantage of a new record production process whereby the "mother" and "stamper" discs used for the mass production of commercial records were no longer necessary. The company operated under more than a dozen English and German sublabels, producing mostly musical collections from the classical, jazz, and popular genres. In the early 1960’s one of the parent company’s sub-labels, Concert Hall Record Club Ltd, introduced a series of tourist language courses.

Terraphone Tourist Language Courses (Let’s Speak … / Parlons … / Ich spreche … / etc.)
Circa 1961, Concert Hall Record Club Ltd, introduced a series of foreign language guides under the name “Let’s Speak …” for the elementary self-instruction of the popularly-studied languages English, French, German, Italian, and Spanish and were apparently available in these same languages as bases. The materials included a hard-covered course manual, measuring 8-inches x 8-inches of some 60-plus pages in length, and 4 x 6-1/2 inch x 33-1/3 rpm paper-backed, plastic flexi-discs which were stored in clear plastic envelopes inside the course manual. 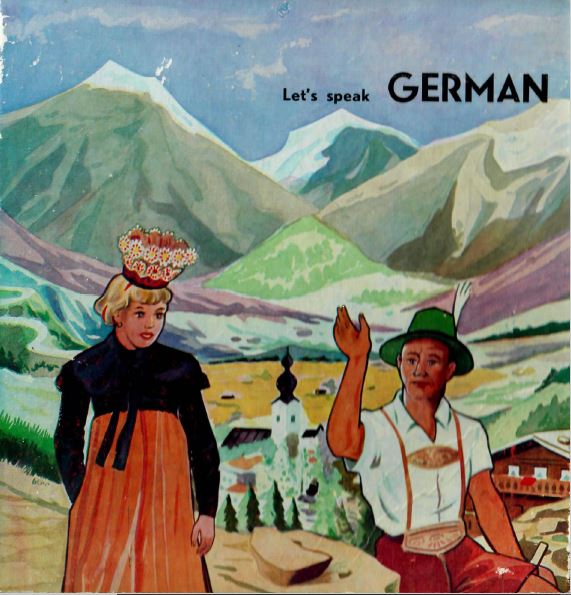 Typical for the genre, these language guides introduced the target language as sets of standard phrases deemed useful to the tourist in predictable situations. The appendix included 10 pages of tips for tourists and brief descriptions of places of interest for the traveler. 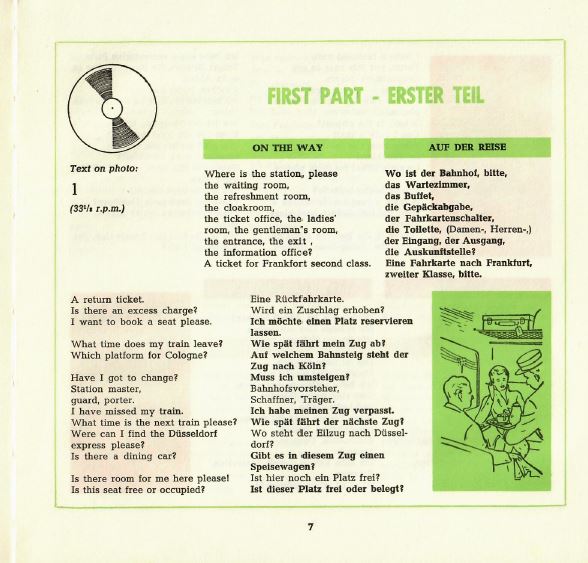 The audio recordings, of some 30 minutes duration, were prepared with the assistance of voice-trained native speakers whose speech was clear, articulated, and delivered at a moderate pace.

Saturated Marketplace
Both the materials of the Terraphone tourist language courses and the set phrases included therein were of a somewhat higher quality than the average fare for the genre. Although I have come across perhaps 200 examples of the genre from the 1960’s through the 1970’s, I will refrain from posting a review for each and everyone of them. The “Let’s Speak” language guides would have been “as useful” to the user as are the equivalent online versions of the present era (e.g., Books2/50 Languages).

For Collectors?
Collectors, start your engines, let them run for about 10 minutes either in a well-ventilated area or outdoors, then turn the motor off, check the oil, and roll your vehicles back to the storage area.
1 x
Post Reply
25 posts