Eureka!
That’s it, I have finally found the Holy Grail of low-priced, vintage language courses from the 1960’s! Or, at least that’s what I initially believed.

The Modern Way to Foreign Languages
In the early 1960’s, a small publisher by the name of Foreign Language Studies, Inc., which seems to have been a subsidiary of Castle Book, which also had a distribution company named Book Sales, Inc., introduced a new series of very basic language courses entitled “The Modern Way to ...” covering the more popular languages for self-study at that time: French, German, Hebrew, Italian, and Spanish. While these courses were designed for use by adults, in some cases, separate editions were published for use by children. The series even included non-language courses such as Arithmetic for Children. The unique feature of these courses was that the audio recordings were provided via “two 2-speed Miracle Records” measuring seven inches in diameter and which had been engineered to operate at both 33-1/3 rpm and 45 rpm. For the purposes of this review, and as an addition to my ever-expanding collection of vintage language courses (my curiosity had been aroused by the concept of a vinyl record having two playing speeds), I purchased a used copy of “The Modern Way to German” at a very modest price. 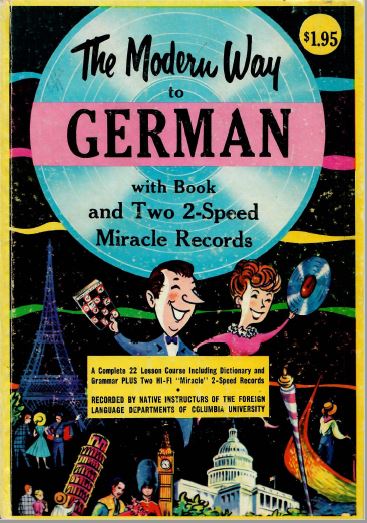 Materials
The complete package was offered as a hardbound textbook, of some 60 pages in length, in which the “two 2-speed Miracle Records” were inserted. The image appended below is of the textbook. As the vinyl records had been engineered to play at both 33-1/3 rpm and 45 rpm, thereby presenting both "slow" and "fast" versions of the recordings, one could make the argument that the combined speeds yielded a total duration of approximately 45 minutes. An alternate calculation, based on the 45 rpm "fast" speed alone, would yield a total duration approaching 20 minutes.

Approach to Learning
The introductory explanations, which covered a surprising 16 pages of the 60 page total, included rather unusual-for-low-priced-basic-language-courses discussions of matters such as: Psychological Factors in Language Learning, Language: The Art of Symbolizing, Foreign Language: Another Set of Symbols, Foreign Language Teaching in Our Schools (“our schools” referred to the current state of language-teaching in American schools), which was followed by detailed explanations on the nature and use of the 2-speed records and instructions for using the materials. The target language was introduced through the presentation of a series of micro-dialogues and/or phrases designed to serve the needs of the student in fairly predictable situations: Meeting People, Customs and Immigration, At the Hotel, At the Restaurant, At the Bank, et cetera, followed by a brief glossary of terms to be used in these situations. The target language was presented, without translation, in the first half of the course book. Line-by-line translations into English were present in the second half of the book. 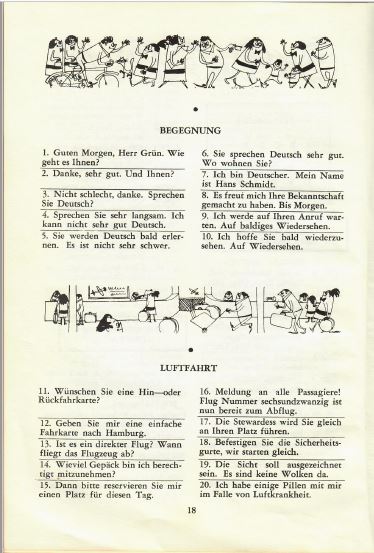 The final 12 pages of the course book included a surprisingly well-conceived, but brief and curiously multi-lingual, summary of verb conjugations and grammar in columnar fashion, covering all five languages in the series. 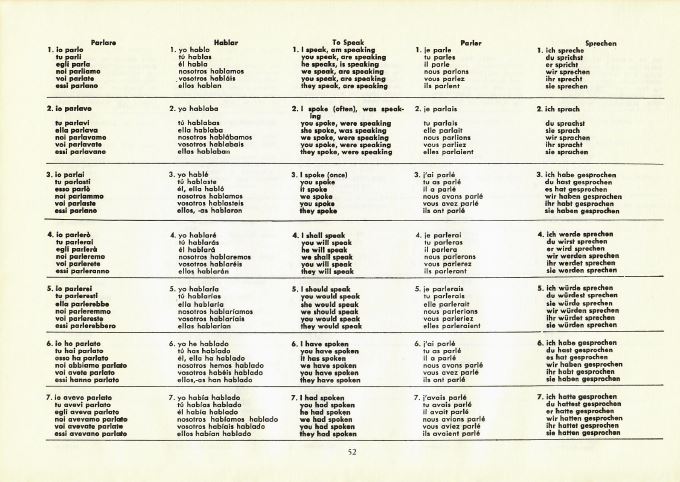 
Very detailed instructions for using the course included steps such as: listening only, listening while reading the text, mimicking the recorded voices, memorization of blocks of phrases and sentences, the use of anticipation as a means to internalize the language, and so forth. Essentially, the student was encouraged to memorize the entire contents of the audio recordings and, hopefully, develop the ability to combine parts of the example phrases so as to create new ones.

Audio Recordings
The publisher took pains to underscore the fact that the recordings had been prepared by native instructors of the foreign language departments of Columbia University. As noted above, the recording medium was two seven-inch vinyl EP records which had been engineered to operate at both 33-1/3 rpm and 45 rpm without distortion. 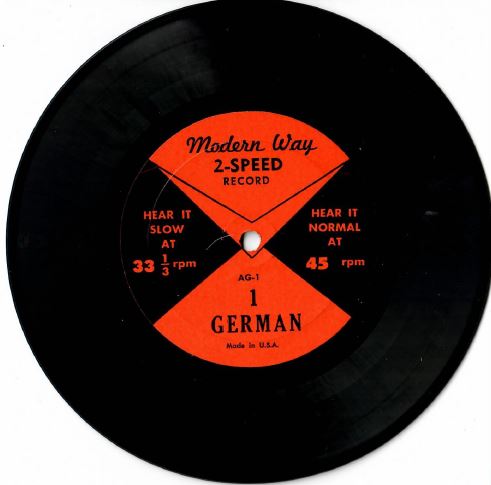 The publisher advised that, at the slower 33-1/3 rpm speed, the student was given an opportunity to grasp and discriminate aurally and ultimately assimilate the sounds of the target language. At the faster 45 rpm speed, the student was given an opportunity to adapt to the cadence of the target language as one would most likely encounter it in a foreign land. I played the vinyl recordings at both speeds. My impression was that, if indeed there were either simultaneous or separate 33-1/3 rpm and 45 rpm pressings of this vinyl record, which I have difficulty believing, the voice tracks had been both (a) slowed down a little and (b) sped up a little, so as to achieve the desired effect. I have the suspicion that the source audio recordings, which were likely stored on magnetic tape, had been deliberately slowed down to produce the sound track at 33-1/3 rpm and that there was not a second pressing of the vinyl to produce the faster 45 rpm track. While it is true that there was no noticeable distortion, at the slower speed, the voice tracks appeared to be a bit unnatural. At the higher speed, the voice tracks seemed noticeably faster than normal speech and, while I would not compare them to “Alvin and the Chipmunks”, I would say that the effect was of listening to someone who was suffering from adenoid problems. So then, while the technique was interesting, it was far from a miracle!

Evaluation and Recommendation
I was quite impressed by the collection of mini-dialogues and phrases that had been designed to serve the needs of the student in fairly predictable situations. Although there were only 200 such utterances in the textbook, the authors managed to prepare a very basic language course exceeding the average Phrase Book of the period. The surprisingly lengthy and decidedly rare psychological preparation for language-learning would have been of some benefit to the self-study student, provided that he read and absorbed its contents. The audio recordings (in German, in the case of the used copy that I purchased) were recorded by native speakers of the target language. The fact that the publisher provided both “slow” and “fast” versions of the recordings represents an additional point in favour of these materials; however, as noted above, the actual effect upon listening was that the cadences were a little bit outside that of normal speech. Although doing so would have increased the price of the package, the publisher could have just as easily prepared genuine “slow” and “fast” tracks and increased the number of vinyl records included in the package. So then, I would give the publisher a grade of C- for the “miracle record” sales pitch. All-in-all, and taking into account the quality and effectives of competing low-priced language courses of the period, this offering was actually quite sound. Nevertheless, unless you’re an avid collector of vintage language courses, I would not advise you to run out an buy one these; they’re curios, fascinating curios, but curios all the same.

Re: The Modern Way With Two 2-Speed Miracle Records

I listen to pluralsight technical IT courses at double speed (1) or read transcripts which when clicked on take you to the video at that point (2).

I think both have potential for language learning.

(2) Something like readlang, mostly reading but can see/hear native for pronounciation.

You could have listening, shadowing, Ollie Kjellin (spelling?) Style Prosody at different speeds, initially slower, normal and then faster.

The other one for listening would be same text, many voices with info on age, sex, speed, clarity, gender, ratings, pitch etc. Some criteria is subjective.

But the info would allow yourself to pick an easy speaker much like yourself (age, pitch and gender) speaking clearly with an accent that you're more comfortable with and work out to harder or more dissimilar speakers.

The aim would be to increase the range of different voices and delivery listened to in order to sharpen the ability to discriminate speech elements and cope with regional or other aspects.
0 x
2018 Cebuano SuperChallenge 1 May 2018-Dec 2019
: SC days:
: Read (aim daily 2000 words):
: Video (aim daily 15 minutes):

Re: The Modern Way With Two 2-Speed Miracle Records

Fabulous 2-Speed Record Course
Recently, I purchased an (unidentified as such) incomplete copy of an undated “Fabulous 2-Speed Record Course” for which package was supposed to contain 2 x 7-inch EP vinyl records plus a course book. Regrettably, the box contained only 1 vinyl record whereas the course book was missing. Although the publisher of this course was not identified on either box cover or on the record label, promotional comments thereon and the similarity of features (2-speed records) caused me to think of “ The Modern Way With Two 2-Speed Miracle Records” course mentioned above. 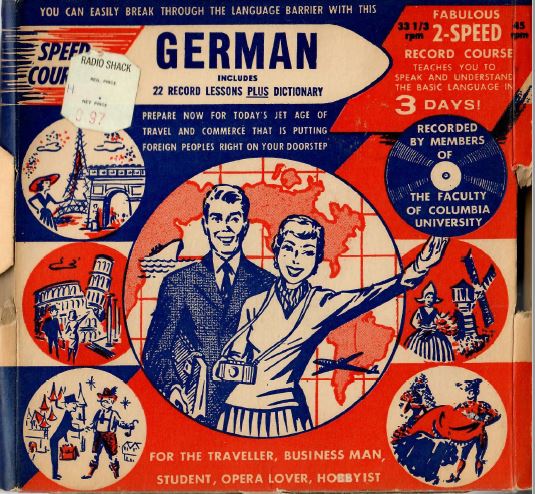 As demonstrated by the image below, save for the absence of “Modern Way” on one of the records, the labelling of the two is virtually identical. I played the first minute of both records and discovered that these are, indeed, the same audio recordings.

Although the package that I received was incomplete, it seems likely to me that the “Fabulous 2-Speed Record Course” preceded the somewhat more polished “The Modern Way With Two 2-Speed Miracle Records” course in the marketplace.

In addition, while I had not noticed the similarity before now, the texts and recordings of the these 2-speed record courses seem identical to those of the “Learn to Speak 5 Modern Languages” course that I reviewed under the “Vintage Language Courses of Lesser Renown” thread. Yes, I know, you all find this fascinating!