by Elsa Maria
I'm looking at getting Linguaphone for Dutch and/or European Portuguese. These courses have answer keys, right?
(I promise that I really did search before asking that question.)

Is the Portuguese course new enough that I don't have to worry about orthography reforms? I haven't yet sorted out when Portuguese orthography changed enough to matter for beginner courses.

by Speakeasy
Hello, Elsa Maria. Although I did not address the matter of “answer keys” in my description of the Linguaphone Portuguese and Dutch courses on page 10 of this discussion thread, the answer to your question is “yes”.

Both of these courses differ greatly in their approach to teaching from those of the previous generation (1970’s). They are far more demanding of the student and, as such, more effective, in my opinion.

by Elsa Maria
Thank you, Speakeasy. I do not know enough about Portuguese spelling reforms to know that they are a minor issue.

I was torn over which one to try first, but I think that Portuguese wins.

by Speakeasy
Elsa Maria, your questions are quite valid certainly worth discussing. As the matter of the reforms to Portuguese orthography touch upon a large number of popular, comprehensive courses which pre-date the reforms, I have opened a new discussion thread …

by AnthonyLauder
I have become quite addicted to owning older linguaphone courses, and have bought rather too many of them (mostly from ebay).

by Elexi
Unless there are blue second stage books under the silver-gray ones, I can't think what those extra tapes are for. The silver-grey series usually came with nine cassettes and I doubt that Linguaphone provided any more material for this version.

I do have one of the business courses with an older version of the listening robo that was essentially a 2 track recorder that allowed you to record your voice over the exercises - maybe the tapes are shorter to make this facility easier?

by Speakeasy
AnthonyLauder, thank you for bringing this edition to our attention. It goes without saying that you NEED to add it to your collection! The 16 cassette edition of what-appears-to-be the standard Linguaphone French course of the era is an interesting variant. Like Elexi, I initially wondered whether or not this might be one of Linguaphone’s “combined” packages containing both the 1st Stage and the 2nd Stage courses. However, looking closely at the depth of the carrying case and the width of the cassette cases, it seems to me that there is insufficient space for the additional course books. And then, I noticed that the cassette player contains a 17th cassette. As an aside, this is a poor way of storing cassettes and cassette players as it damages both. 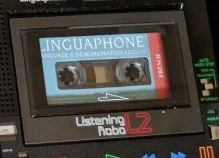 Coming back to the cassette, the amount of magnetic tape visible in the small window leaves me with the impression that, for this edition, Linguaphone spread the recordings over a greater number of cassettes, each having perhaps four lessons per two-side tape, so as to facilitate their use by the user. It is also possible that the B Side of the cassettes were blank and were to be used for recording the user’s voice for comparison with the original. Either way, Antony, you NEED to buy this!

by AnthonyLauder
I have searched around and found a few other linguaphone courses for sale with the same huge sturdy case and the same fancy tape player. This one, which is for learning English, claims the set is from the 1990s. 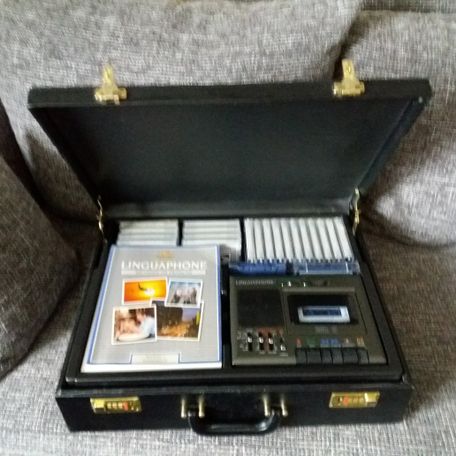 In terms of the French set that I mentioned in the post above, I have written to the seller, trying to negotiate a deal on the price and on shipping. Fingers crossed. 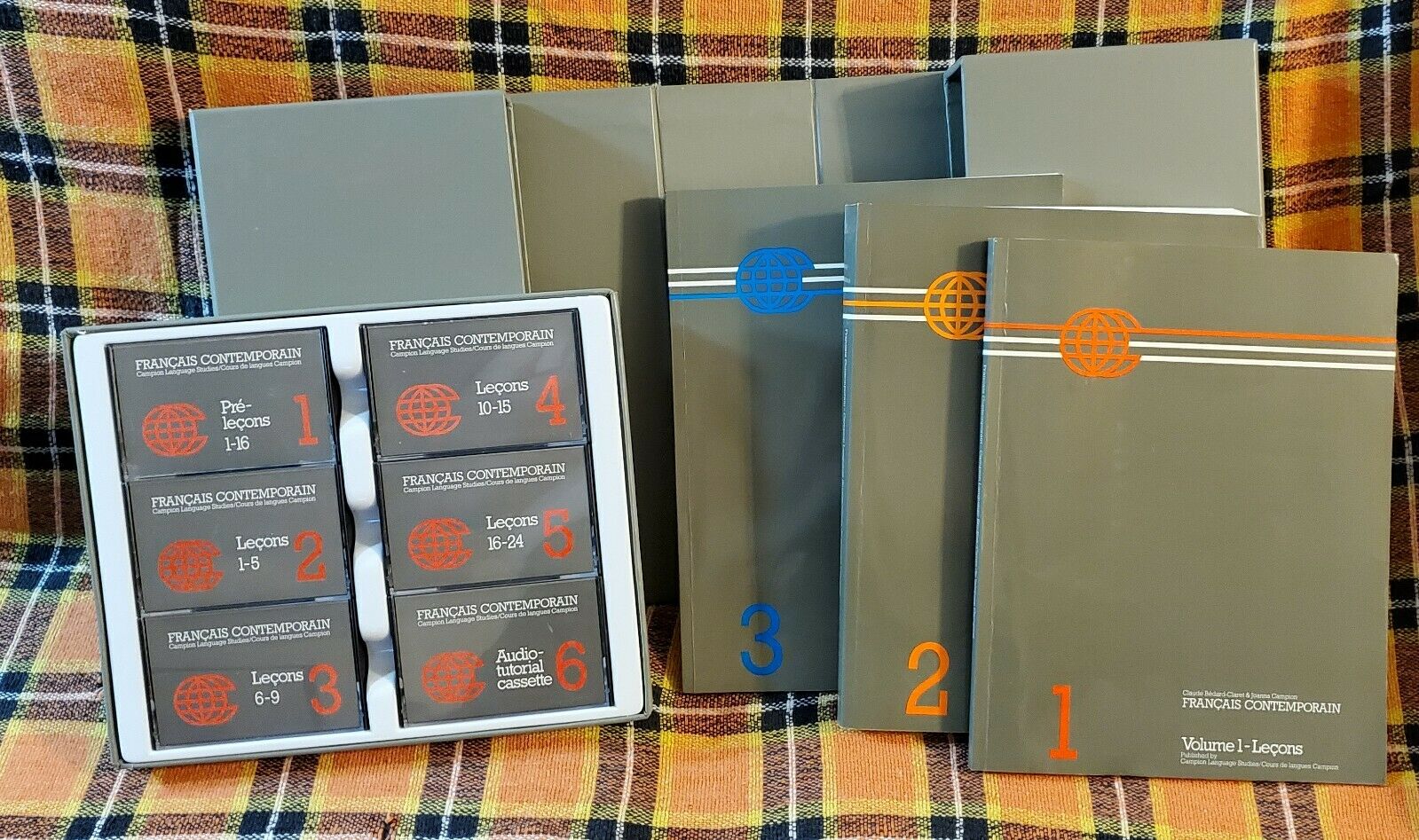 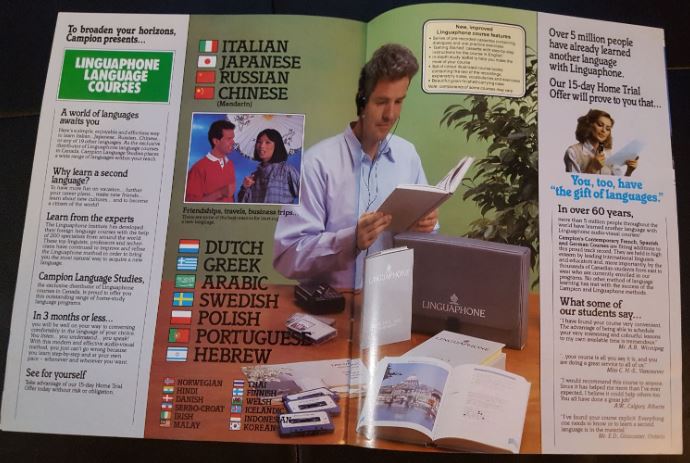 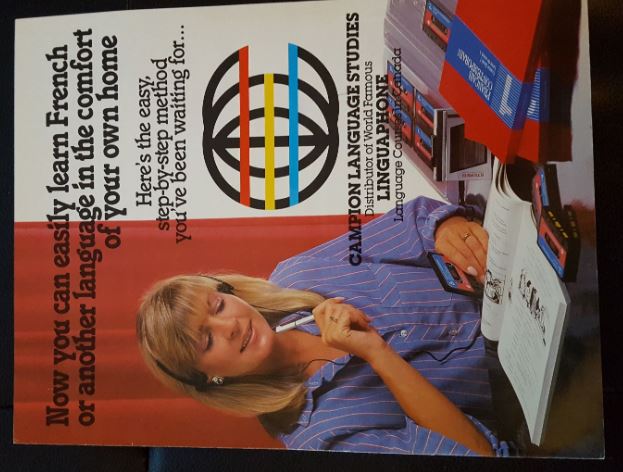 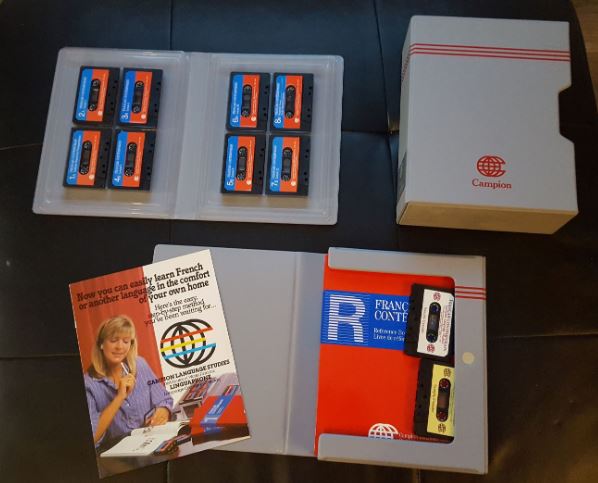 Should anyone happen to have a copy of the Campion Language Studies "German" course, I would be quite interested in purchasing it.

by Elsa Maria
The vintage courses are so interesting to look at, and I am fascinated that some of the courses came with a player. But I am glad that I am not tempted to start collecting vintage courses since I already collect vintage books

Maneuvering through took some getting used to. There are arrow buttons that jump you to the exercises, but I have not discovered any easy way to jump back. I made use of the bookmark system to jump back and forth, but it is a clumsy bookmarking system so I gave up on that idea. Instead, I had the course open on two devices and let one of the devices be on the exercises page (these pages come after the lesson text). I am still fussing around with the bookmarks, getting things optimized.
All times are UTC
Page 13 of 15
Powered by phpBB® Forum Software © phpBB Limited
https://www.phpbb.com/