All about language programs, courses, websites and other learning resources
Post Reply
39 posts

cjareck wrote:Rechtschreibprüfung - I recommend it, as it really helps in writing by finding grammatical errors in the text.

If you're a Firefox user, I'd also recommend the LanguageTool browser plugin, which supports 25+ languages. (It's also available for Chrome/Chromium)

korrekturen.de also offers the out-of-print 2006 Wahrig spelling dictionary as a free pdf download.
(The Wahrig dictionary is more conservative than the Duden. E.g., if you look up "vor kurzem," the Duden will recommend "vor Kurzem" while the Wahrig will suggest the old (and still acceptable form) "vor kurzem". The same goes for the translation of nightmare, which the Duden spells as Albtraum and the Wahrig as Alptraum.
1 x

Elsewhere in the world: Die Auslandsgemeinden

Might be interesting to some, it has man-made subtitles:

Students of German interested in expanding their vocabulary of military terminology via readings of actual BBC broadcasts in German, addressed to the citizens of their erstwhile WW2 adversary, might be interested by “News in German” by D.H. Stott, published in 1942 by George G. Harrap & Co. Ltd. 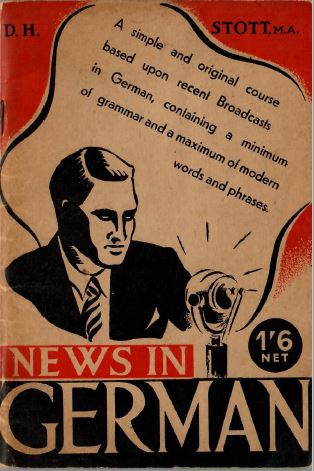 The Preface to this 64-page pocket-sized booklet advices the reader:

“This short course of ‘news’ is so arranged as to include the words most frequently used in the [BBC] broadcasts in German. It is the result of the author’s experience with army classes, with which it has an outstanding success.

Very easy at the start, the passages gradually work up to the point where the actual [BBC] broadcasts can be understood. With the pronunciation guide and full vocabulary, compiled for use without previous knowledge of the language, even the beginner can tackle this course; by listening to the [BBC] broadcasts broadcasts in German, and with the help of this book, he will be able to pick up the correction pronunciation, train his ear to understand German, and go a long way towards learning the language.

The readings are based upon [BBC] broadcasts sent out at various dates in 1941, and do not profess to represent the war situation up to date. A number of extracts from actual broadcasts – made available by the courtesy of the British Broadcasting Corporation [BBC] – are given in an Appendix.” 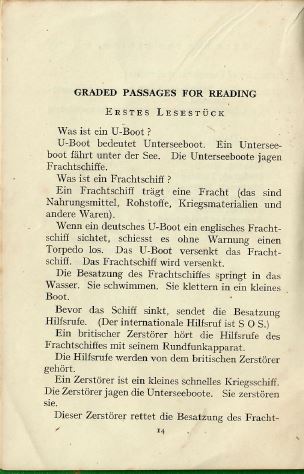 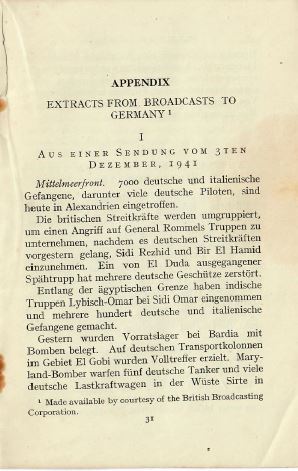 EDITED:
Expansion of the text to include: "Imagine yourself ..."
8 x

Chung (in the German Study group) wrote:Here're some links to free online videos with good to excellent German subtitles (i.e. not auto-generated). Many of you probably know about a few of these already and some have been mentioned in other parts of the forum but I don't see the harm in putting up links for several of them in one post in this thread. Like a lot of learners, I've always preferred subtitles to dubbing and I especially like it when there are subtitles in the same language as the speaker(s) so that I get a running transcript (even better when the subtitles can be toggled on and off so that focus more on listening and watching the action in the original language when the subtitles are turned off).

- Easy German
- Y-Kollektiv
- Dinge erklärt - Kurzgesagt
- logo! - Kindernachrichten (you can toggle the German subtitles for most broadcasts, which are offered for the last 7 days on a rolling basis)
- Online Focus
- Titel, Thesen, Temparamente
- Deutschland von Oben
- German Story - Where we come from? (English and German subtitles available)

In general, look up videos with "deutsch Untertiteln" or "German subtitles", and you should get some hits.

I know that you can also turn on the German subtitles for many shows/movies on DVDs or Netflix although those aren't usually free.

I got this one yesterday at my local Barnes & Noble book store. No, it is not the dog.

The German travel pack. German phrasebook by Eyewitness Travel Guide. It cost me USD $10.
I like it a lot; the small phrasebook comes with an audio CD where a native speaker reads all the phrases.

It gives time to shadow before the next sentence. You can read the book as you listen to the phrases.

mentecuerpo wrote:I got this one yesterday at my local Barnes & Noble book store. No, it is not the dog.

The German travel pack. German phrasebook by Eyewitness Travel Guide. It cost me USD $10.
I like it a lot; the small phrasebook comes with an audio CD where a native speaker reads all the phrases.

It gives time to shadow before the next sentence. You can read the book as you listen to the phrases.

I wonder if your dog will turn into a German shepherd.
2 x