Seldom Discussed in the Forums
The “Langues pour tous” collection of self-instructional language courses, with few exceptions, is written for an audience of native-speakers of French. Although there are a couple of recommendations on the HTLAL concerning specific languages covered in the series, the series has not received much attention either on the HTLAL or on the LLORG. It occurred to me that some forum members, more particularly those having an intermediate-level of skill in French and who are familiar with the excellent “Méthode 90” series, might be interested in learning more about this collection.

Éditions Pocket / Press Pocket
I cannot offer any information on the history of the French publisher, Éditions Pocket / Press Pocket; nevertheless, the company’s website does offer a fairly broad selection of books, in pocket format, covering contemporary and classic literature as well as modern languages. The indication “1970’s to the Present” in the title of this thread is based on the dates of publication of the company’s “40 leçons” series of language courses which are posted on a number of online booksellers’ websites.

Langues pour tous
The “Langues pour tous” collection includes an impressive list of introductory-to-lower-intermediate self-instructional language courses, language guides, bilingual readers, unilingual readers, novels, collections of short stories and poetry, and the like. As there are simply too many individual items to list here, those interested in exploring the publisher’s collection are invited to visit either the website of Éditions Pocket / Press Pocket or those of the websites of sellers of French-language new/used books. Éditions Pocket: https://www.lisez.com/pocket/collections-et-series/15

Le [langue] tout de suite!
These pocket-book-sized language guides, often of approximately 160 pages in length, propose to introduce the user to the language necessary for communicating one’s essential needs, in the predictable situations that a traveller would likely find themselves during a short-term visit. Often, the contents of these books are supported by 1 audio CD. Languages included in the series (from a French base except where noted) are: Arabic, Brazilian, Chinese, Czech, Dutch, English, French for English-speakers, Hungarian, Italian, Japanese, Korean, German, Modern Greek, Occitan, Polish, Portuguese, Russian, Spanish, Turkish, Vietnamese, along with a few editions covering specialized aspects of English. I have a few of these books (Dutch, German, Polish, Russian) and I support the generally-positive customer reviews on Amazon (most of the less-than-positive reviewers expected a more in-depth coverage of the target language). That is, as for many offerings in the genre, these language guides provide the user with an opportunity of acquiring a CEFR A0 competence with the target language.

Le [langue] en 40 leçons
Le [langue] pour tous en 40 leçons
40 leçons pour parler [langue]
Flag Ship Course
The “40 leçons” series would appear to be this publisher’s “flag ship” of self-instructional language courses. Although there are slight variants in the titles of the individual courses in the series, the appearance of “40 leçons” in the name is a fairly good indicator of the series. Some confusion might arise with some older editions of this publisher’s higher-level language courses which also include “40 leçons”; however, a close reading of the titles should resolve any confusion. 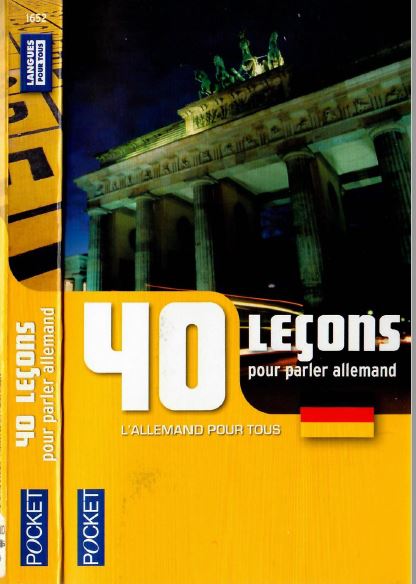 Editions and Generations
As is the practice of several publishers (e.g., Assimil, etc.), Éditions Pocket published several “editions” of their “40 leçons” courses, often with unique ISBNs and, occasionally, with slight changes to the titles. I compared the six editions (1978 through 1997) of the publisher’s German course which form part of my collection, focusing primarily primarily on Parts A and B and noted no substantial differences across the editions. As reported by Arnaud (avec mes remerciements) the initial editions did not contain Part D, which was subsequently added. Thus, there were two generations of these courses.

Materials
Materials included in these courses are: a pocket-book-sized course manual, measuring approximately 4-1/4 inches x 7 inches, of some 400 pages in length, printed on newsprint*, accompanied by 2 audio CDs of approximately 2-1/2 hours duration, packaged in a durable cardboard case. *The course manuals of the 1970’s-era editions were twice as large, much more durable, and were printed on high-quality commercial paper.

Methodology
The target language is introduced through 40 highly-standardized lessons, each of which contains eight pages of three-to-four very short dialogues accompanied by short exercise sets, lesson glossaries, concise but truly excellent notes on grammar, and some rather interesting and enjoyable comments on the L2’s culture. The annexes include a very good precis of the L2 grammar and a bilingual glossary of the approximately 2,000 vocabulary items introduced in the course. Somewhat in the manner of the Assimil courses, the final dialogues of each lesson often have a mildly humorous/ironic touch to them which adds to the enjoyment of using these courses. Some HTLAL members have compared these courses to those of Assimil; however, to my mind, the layout of the materials is only remotely similar to that the latter. The images below are drawn from the publisher’s “40 leçons pour parler allemand” course, Leçon 8. 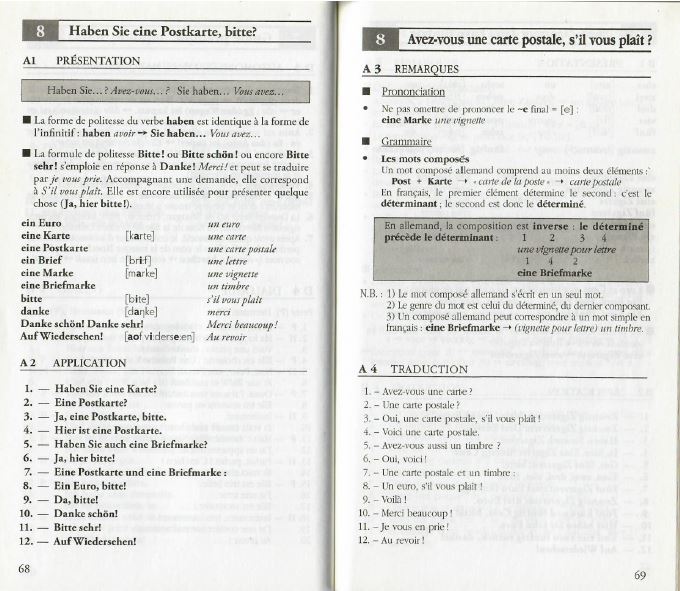 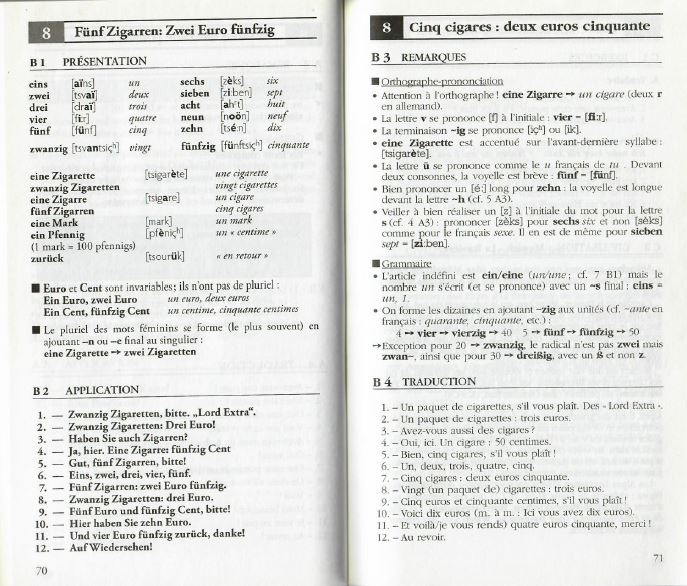 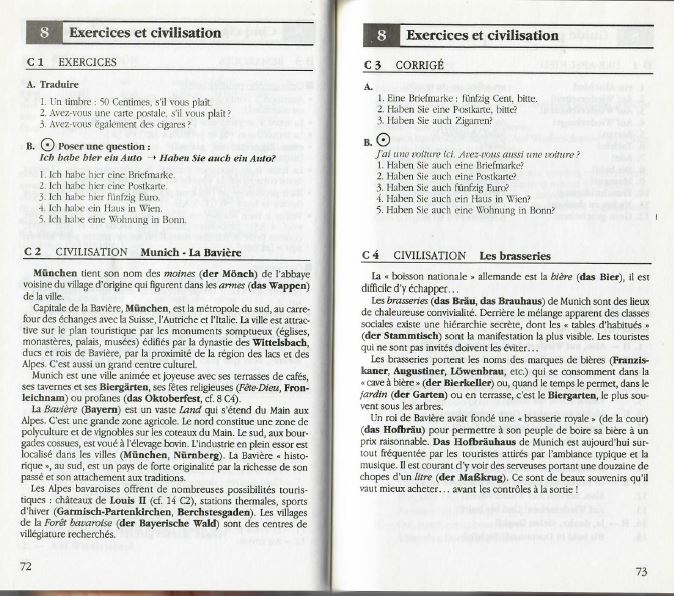 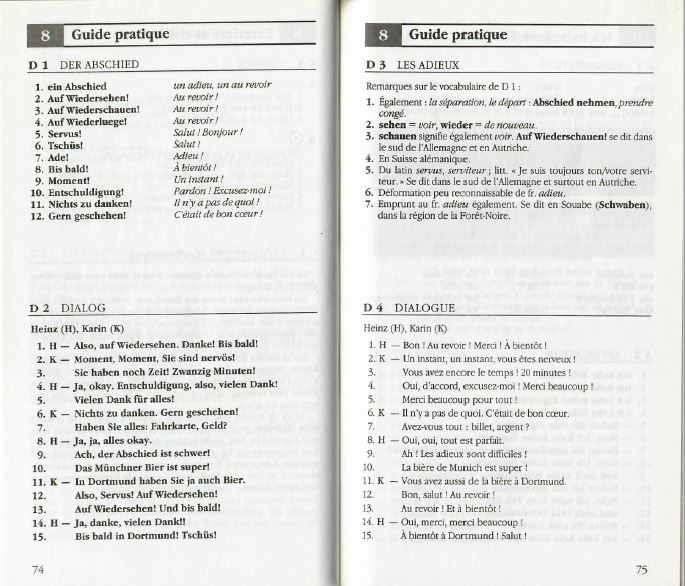 Audio Recordings
The audio recordings were prepared with the assistance of voice-trained, male and female, professional native-speakers whose speech was clear and well-articulated but not forced as in the Cortina courses. Throughout the course, the cadence of speech in the initial dialogues was at a leisurely pace, but not laboriously slow as in the initial Assimil courses. In contrast, the final dialogue of each lesson, while still retaining the clarity and articulation of the initial exercises, was delivered at the more rapid speed of conversation between native speakers.

Level Attained
I am under the impression that, upon completion of one of these courses, an astute independent language-learner will have attained a solid CEFR A1+ level of competency. For those readers who might be tempted to conclude that the “Langues pour tous” courses are not comparable to those of, say, “Méthode 90” and “Assimil Sans Peine”, please note carefully that this publisher chose to offer a series of different courses, each at increasingly-higher levels of attainment. Thus, while the “40 leçons” might be broadly equivalent to the first-half-plus of the former, the other half of instruction was available through a sequel. In my opinion, with a few exceptions, the “40 leçons” are superior to Routledge’s “Colloquial” courses (I am sure to receive strong feedback on that!)

Assessment: Truly Excellent!
I have used this publisher’s courses for the study of Dutch, German, Italian, Russian, and Spanish. Although the pattern of instruction is highly-standardized, I reacted differently to the detailed approach adopted by the individual authors. To be more specific, I found the Dutch, German, and Russian courses absolutely superb! However, I found the Italian and Spanish courses rather humdrum by comparison. This does not mean that the latter were below standard, they were not; it’s just that I found them less engaging than the former. Other students will react according to their individual tastes in language-learning materials.

I came across five recommendations for specific courses in this series on the HTLAL, posted by seasoned language learners. The majority of Amazon Customer Reviewers were very positive and, in my opinion, the less-than-positive ones suggested a lack of experience in the self-study of foreign languages. My only misgiving concerning these courses relates to the publisher's choice of newsprint paper for the course manuals, a decision which cheapens an otherwise excellent product. If your French is up to the task, you should consider studying/reviewing a language with one of these economically-priced, very solid, entry-level courses.

General Comment
Beginning perhaps in the 1970’s and continuing through the 1990’s, Éditions Pocket / Press Pocket published a series of sequels to their entry-level, self-instructional language courses covering, for the most part, the more frequently-studied languages. Not all of the courses were accompanied by audio recordings. For some languages, up to three, four, or even more sequel/supplementary courses were available, and this does not include grammars, dictionaries, and self-testing booklets.

Some of the courses, but not all, were assigned a number which I assume was meant to indicate increasing levels of difficulty; unfortunately, there was no guide as to what the grading system actually meant. Adding to the confusion was that, based on my approximately C1 level in German, the grading does not seem to have been internally consistent! In terms of complexity of the L2 structure and vocabulary materials ranged from CEFR A2 through CEFR B2 and possibly a little higher.

As might be expected, the audio recordings were prepared with the assistance of voice-trained, male and female, professional native-speakers whose speech was clear and well-articulated. Throughout these higher-level courses, the cadence of speech is that of rapid speed of conversation between native speakers.

One difficulty in identifying these courses is that the publisher does not seem to have exercised much editorial control over the series’ titles. Although many of them now seem to be out-of-print, based on my experiences with this publisher’s German and Spanish materials, I can confirm that they were uniformly of a very high quality, were very useful to the advancing independent language-learner, and are most definitely worth adding to one’s collection.

Below is a selection of titles. PLEASE NOTE: (a) the titles were not consistent across the languages, but that (b) different titles covering a specific language generally indicates distinct courses and not the same course having different titles.

PART 4 of 4
READERS, ET CETERA
Éditions Pocket / Press Pocket published several series of uni-lingual readers, bilingual readers, selections of short stories, poetry, et cetera covering the frequently-studied languages. They are far too varied and numerous to list here. Those of you who are interested in exploring the subject are invited to visit the publisher’s website and those of booksellers which offer French-language materials.

I'm not sure, but the D part (dialogs) is not in all the 1st generation of the "40 leçons" : I remember having had two versions of the german: one with the final dialog and one without. So for me there are at least two generations in certain books (the russian and japanese didn't change, afaik). In the very first generation of german, I suspect there are no D part (there were perhaps added later to adapt to the "communicative approach").
All that is written here needs to be checked, it's based on old memories...
Edit: I've got an old pdf (1994 edition) which has no civilisation notes nor D dialogs, so I confirm; at least 2 generations for the german.
3 x

Great tools for grammar exercices, easy when traveling and makes grammar attractive. Cheap prices too but for French speakers...
2 x

Arnaud wrote:I'm not sure, but the D part (dialogs) is not in all the 1st generation of the "40 leçons" … I've got an old pdf (1994 edition) which has no civilisation notes nor D dialogs, so I confirm; at least 2 generations for the german.

Arnaud, thank you very much for this observation! When I compared my editions of the German course, I focused primarily on Parts A and B and noted no substantial differences across the editions; however, I did not compare the contents of the final parts of the lessons. As a result, I overlooked the absence of Part D in the initial editions (par ma faute, par ma faute, par ma très grande faute). I have corrected, and renamed, the entry under Editions and Generations. Avec mes remerciements!

Jean-Luc, thank you very much for appending the link to your excellent review of the Langues pour tous self-test books. I used the German book and found that it was a very useful supplement to the basic course.
0 x
Post Reply
4 posts • Page 1 of 1