Nature Method Language Courses
The “Nature Method”, as defined in the 19th century, remains popular amongst many independent language-learners. Recently, whilst scouring the internet in search of vintage language-materials, I happened upon the “Thimm’s Self-Taught” series which, according to the authors, employed the Nature Method. There are numerous booklets in which the notation “Thimm’s System” appears in the title, attributed to a large number of authors other than Franz Thimms and Carl Thimms, the originators of the series.

Franz J.L. Thimm’s Self-Taught Series
In the mid-1840’s, language teacher and linguist, Franz J.L. Thimm (1820-1889), introduced his own variant of the “Nature Method” for the self-instruction of foreign languages. The most frequently-appearing title in the series was “[Language] Self-Taught : a New System on the Most Simple Principles for Universal Self-tuition, with English Pronunciation of Every Word”. Language courses attributed to Franz Thimms, available for study from an English base, were: Afrikaans, French, German, Italian, Spanish and perhaps others. The course booklets, either hard-covered or soft- covered, measured approximately 5-7/8 -inches x 8-1/4-inches and contained from 80 to 130 pages. The booklets were published by several publishers located in New York and London and they were reprinted, by permission, under the series name “Marlborough Self-Taught System”.

Carl A. Thimm’s Self-Taught Series
During my searches of the internet for the “Self-Taught” language courses published by Franz Thimm, I came across similarly-titled language courses published under the name of Carl Albert Thimm (1856–1932). The most frequently-appearing title in the series was “[Language] Self-Taught by the Natural Method: With Phonetic Pronunciation”. Language courses attributed to Carl Thimms, available for study from an English base were: Arabic, Dutch, Chinese, Egyptian, German, Hindustani, Italian, Norwegian, Polish, Portuguese, Russian, Swedish, Turkish. In addition, courses were available for the study of English for speakers of French, German, Italian, Spanish, Yiddish. The course booklets, either hard-covered or soft- covered, measured approximately 5-7/8 -inches x 8-1/4-inches and contained from 80 to 130 pages. The booklets were published by several publishers located in New York and London and they were reprinted, by permission, under the series name “Marlborough Self-Taught System”.

Language Guides NOT Nature Method Courses
Both authors identified their language courses as belonging to the “Nature Method” of self-instruction. They were not. As can be seen from the images below, which are drawn from different booklets in the series (by both authors), the contents were: (a) guides to pronunciation of the target language, (b) lists of vocabulary, and (c) phrases deemed useful to the traveller. Even at the upper range of approximately 130 pages, the narrow scope of these booklets and the small quantity of materials they contained would disqualify them as language courses; these were language guides. It is fairly clear that the separately-authored and similarly-titled language guides formed a continuum. It is quite possible that a filial relationship existed between the two authors. 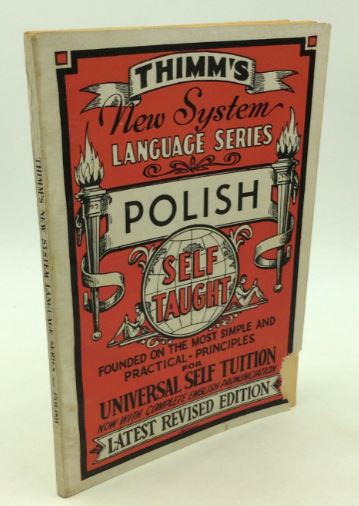 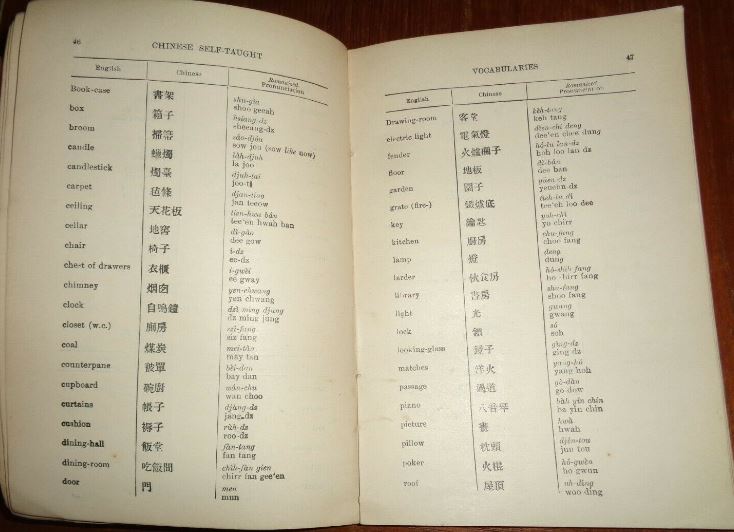 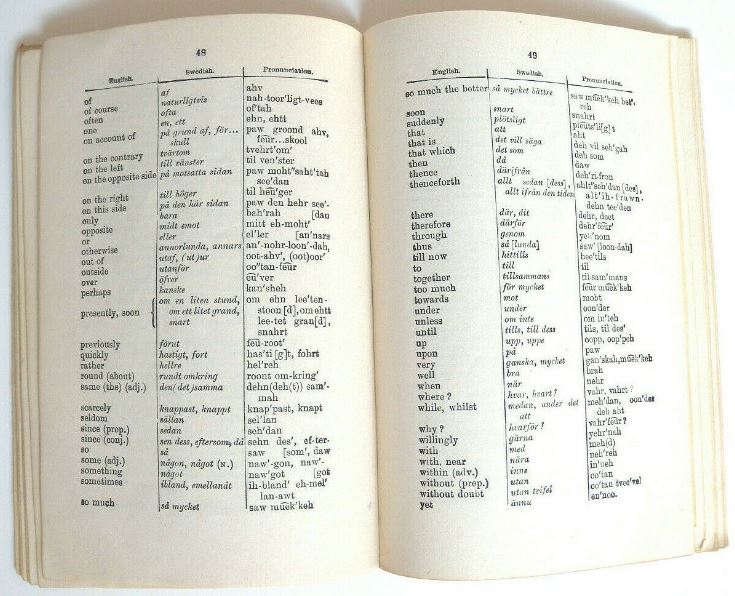 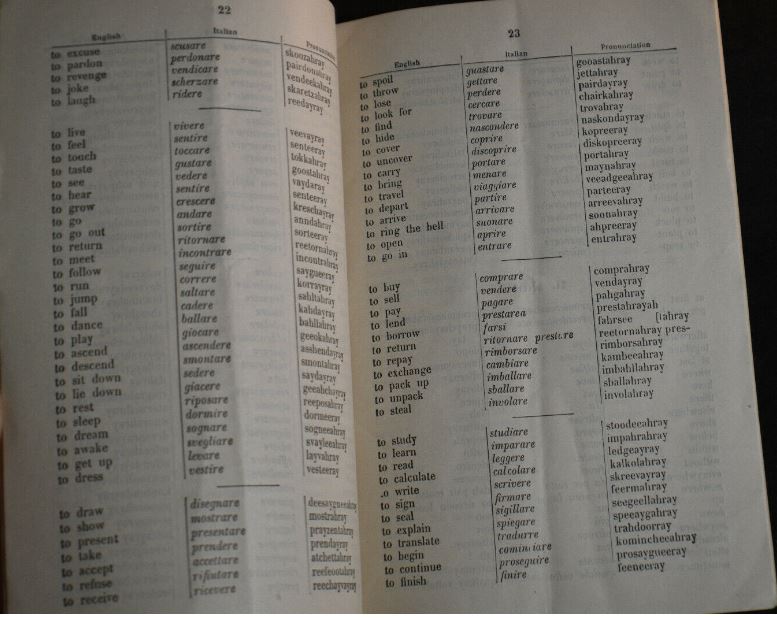 Audio Recordings
Although the Thomas Edison phonograph cylinders became available in the 1870’s, neither the authors nor their publishers chose to adopt this technology, a decision which is not surprising given the narrow scope of these courses and the likely costs of audio recording at the time. Nevertheless, LibriVox volunteers have prepared recordings of the “French Self-Taught” and “Hindustani Self-Taught” courses:


Reviews
Given the age of these courses, their narrow scope, and the absence of audio recordings (with the exception of the French and Hindustani courses mentioned above), it is not surprising that there are very few reviews posted on the internet. Nevertheless, I did come across the following comments:

Doitsujin on the HTLAL in 2015 wrote:IMHO, there a much better free Natural Method textbooks for some languages out there. I certainly wouldn't waste my money on a reprint of the old Franz Thimm method books.

DrX on the HTLAL in 2015 wrote: Yeah it looked pretty weak to me. Wasn't sure if the previews on archive.org were just missing pages but seems to only be lists of vocab and some grammar rules.

Montmorency on the LLORG in 2016 wrote: oh, in passing, more resources: "Norwegian self-taught by the natural method. With phonetic pronunciation. Thimm's system" (from 1912...).

Book_lover on Amazon in 2007 wrote:Excellent! My Afrikaans language skills are base[d] on this book. I really recommend this book; it has helped renew my confidence in my Afrikaans language skills. This great book has been around for many years, coming out in newer and newer editions, so its been a bestseller and ther are many reviews of it elsewhere. But if you are lazy about learning a language avoid this book. It expects old fasion dedication but that which pays of handsomely in the end wit perfect Afrikaans. The book is based on the Thimm's method which teaches you the correct pronunciation, If you follow the rules in the book from the outset (getting in to a good habit) the pronunciation should be perfect. The book is excellent as long as you take the time to follow the method. The Thimm's method is one of the oldest methods and most language teaching methods are derived from it. This book is based on language progression and is intended for beginners to those wanting to brush up their Afrikaans skills. I bought this book and I found it very useful. The way it is organized is the key to its success. There are no loose ends, everything leads on to something else, all is related and helps learners build up their Afrikaans with a greatly reduced effort. I have a linguistic background but am aware that many learners do not have grammatical knowledge. This course helps in this area too. Grammar is there but presented in a painlessly manner. Learners can get the concepts and put them to work in practice without the difficulties and boredom usually associated with grammar. I was pleased to see that highly useful information regarding the language, such as the usual grammar notes and essential vocabulary dotted throughout the pages, was included and this has helped to propel my Afrikaans to a higher level than before. I took Afrikaans for three years in school and wanted to brush up, and this book was perfect. I can't speak for those who have no prior knowledge of Afrikaans although as you can see, the author claims the book is suitable for beginners) since I already knew most of the vocabulary used.

Logan Miller on Amazon in 2007 wrote:Avoid this Book. To begin, let me say that Afrikaans isn't a difficult language for an English speaker to learn. The grammar is minimal and systematic, and the pronunciation is consistent (a few exceptions here and there) and not much trouble at all for a learner to pick up. The first half of the book focuses on wordlists, setting up three columns on each page : a column for the English word, another for the Afrikaans equivalent, and a rough pronunciation guide in the last column. The second half introduces elementary grammar, but it then goes back to the three-column structure and introduces short terms and sentences that read more like a phrasebook than a self-teaching guide. The style of teaching in the book is very similar to the method used in older Berlitz textbooks, relying entirely on rote memorization. The vocabulary in it is dated, and I noticed that the pronunciation guide is sometimes wrong. The only reasonable use I can see in this book is if you want to learn a little Afrikaans but are not entirely serious about it. Even as a phrasebook, it's considerably lacking. My interest in the book is mainly for the wordlists (a dictionary of course serves the same purpose, but these lists are at least arranged by category) and for familiarizing myself with words no longer in use. As mentioned, a lot of the vocabulary is out of date, and the text makes no allowances for this.

Nik on Amazon in 2019 wrote:This gives an account of Egyptian Arabic from the early 1900's so some phrases are a bit outdated, but it's fun to read and there's some useful pronunciation guides.

Deborah L. Gilson on Amazon in 2018 wrote: This item seems to date from the early 20th century (couldn't find any copyright info). It's really a phrase book with Spanish phonetics for English speakers included. It does not include a grammar - that was apparently put in another related book. Fun to see what was considered important to include back then but don't expect to learn a lot of Spanish with this.

_scm_1 on Amazon in 2013 wrote: There are lots of methods out there for learning French. I decided on this one because I ran across it first as a free PDF download somewhere online. I liked it enough to search for a book version, and I'm very pleased with this high-quality paperback format here. I like the fact that this is an older method. I wasn't concerned about flash or style; I just wanted the basics and this method delivers that. The type/font is clear and classic, and layout easy on the eyes and not too busy. The sections are broken down into small lessons that are easily tackled in a learning stretch. The bottom line is that if you really want to learn French, all the tools are easily laid out here for you.

I will say this though: I spent a couple years with Pimsleur's audio only method before finding this book. I found Pimsleur One extremely helpful in learning the sounds and accents of French, but by the time I got to Section Two I wasn't connecting well with the method and knew I needed to see it on paper, etc. But the things I learned in Pimsleur One were EXTREMELY helpful for getting the most out of Thimm's method. When I see the French words and the English attempt to sound it out, I can get it almost instantly. Without Pimsleur I'm sure I wouldn't have a much harder time. So if you can find some basic French sound examples to go along with this book, I think it would be very helpful to you. "

Originals, Reprints, eBooks and the Like
Copies of the original course books can still be found on the internet. In addition, several publishers offer reprinted editions. Finally, digitized copies of some of the author’s works are freely available via the Hathi Trust Digitial Library, the Internet Archive, the Online Books Page, and other websites.

Assessment: Decent, for the Period
Whether the Thimm’s language guides followed a well-established format or were innovative, the scope of these booklets was quite narrow, resulting in a rather limited practical use. Nevertheless, for some travellers, they might have represented a much-appreciated buttress in their limited communications with locals. Essentially, these language guides were the equivalent of Book2/50Languages without the audio recordings. For collectors only, but not in reprint, IMO.