Visaphone Language Materials
In the early 1960’s, a small set of elementary, home-study, language materials was introduced under the series names “Visaphone” and “World and Press” by a German publishing house. Although offers for used copies of these courses on Amazon, AbeBooks, and eBay primarily list Eilers & Schünemann Verlag of Bremen as the publisher, my copies of the two Visaphone Deutsch courses identify Hans Witte Verlag of Freiburg as being the publisher. Wer weiss?*

Visaphone Courses (Children’s Dictionary)
This was the most complete course of the three sets of materials. Languages covered were: English, French, German, Italian, and Spanish and each of these languages served as a base-language. Materials included (a) a hard-covered textbook/lexicon measuring 8-1/2-inches x 9-inches, of some 280-plus pages, printed in the target language only, (b) a similarly-dimensioned hard-covered translation of the former, (c) (depending on the language) 12 to 15 x 7-inch x 33-1/3 rpm EP vinyl records, for a total duration of approximately 3 hours, and (d) a very sturdy cardboard storage case. 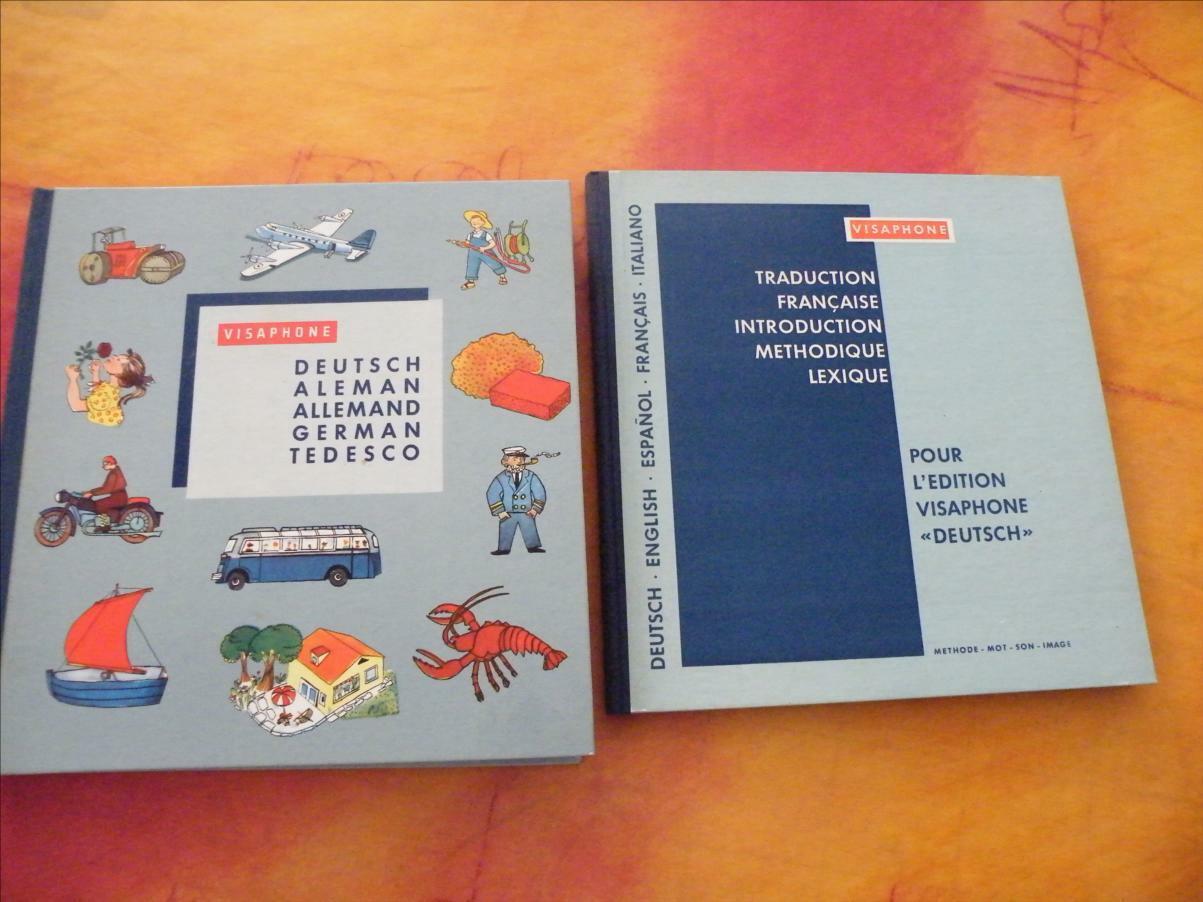 
The approach to teaching was rather unusual. The cover of the translation textbook includes the (translated) annotation: “Method: Word, Sound, Image”. The contents of the main textbook were laid out as in a dictionary: entries were comprised of common items of vocabulary, listed in alphabetical order, accompanied by a sketch, one short sentence in which the words appeared, and a brief definition of the entry. All entries were in the target language only. The sketches and the definitions leave one with the impression that the book was intended for use by children. This is supported by an annotation on the translation textbook which reads as (translated): Children’s Dictionary. 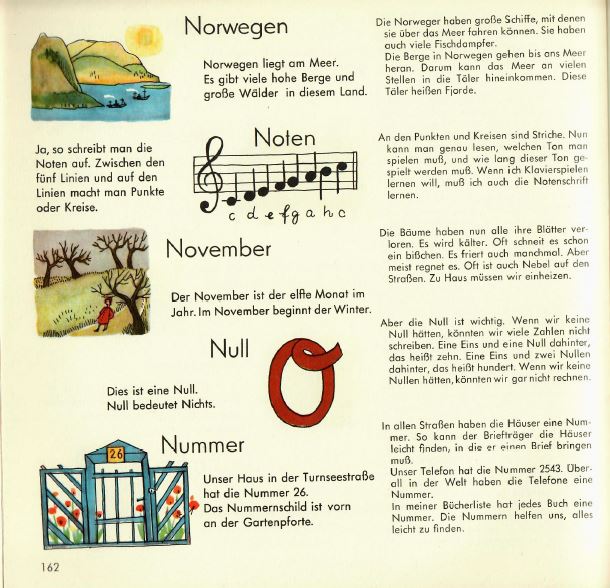 The accompanying translation textbook provided a literal, as opposed to a literary, translation of the main texts in one of the five languages in which the series was available. Although the main textbook has the appearance, and even the designation, of a children’s dictionary, these courses were intended for the self-instruction of adults. Users were advised that the entries and their definitions were NOT laid out in a progressively-more-difficult manner and that the materials could be studied in any order at all. There were NO notes explaining the grammar of the target language or any other support. Users were encouraged to work with the accompanying audio recordings as one would do with many other home-study language courses (only the individual entries and the short sentences were recorded; however, the definitions were unrecorded); that is, listen to the recorded voices and repeat the utterances so as develop a high level of comfort with the spoken language. Thereafter, users were encouraged to use their newly-developed skills to read the definitions aloud, consulting the translations only when absolutely necessary. Users were encouraged to expand their speaking skills through study of the separate-sold Visaphone Interpret courses (see below).

These courses were, I suppose, a variant of the Natural Method or perhaps the Direct Method. The level of language and the range of vocabulary appearing in the definitions would have been roughly equivalent to that of CEFR A2-B1. Nevertheless, given the nature of the brief sentences which accompany the dictionary entries, I am left with the impression that the practicing of these recorded sections would NOT have been sufficient to bring even a very diligent independent learner up the level in reading skills which would have be achievable with these materials. In my view, the publisher missed an opportunity of assisting the student by not recording the definitions. Overall, my assessment would be that these courses represented an “interesting departure” from the mainstream approach used in the self-study of foreign languages but that the user would have been better served through the study of Assimil, Linguaphone, and the like.

Visaphone Interpret Courses
This was the lesser course of the three sets of materials. Languages covered were: English, French, German, Italian, and Spanish. Materials included (a) a hard-covered textbook measuring 9-1/2-inches x 6-1/2-inches, of some 100-plus pages, (b) a small, soft-bound glossary and guide of some 65 pages, (c) 3 x 7-inch x 33-1/3 rpm EP vinyl records, for a total duration of approximately 45 minutes, and (d) a sturdy cardboard storage case. 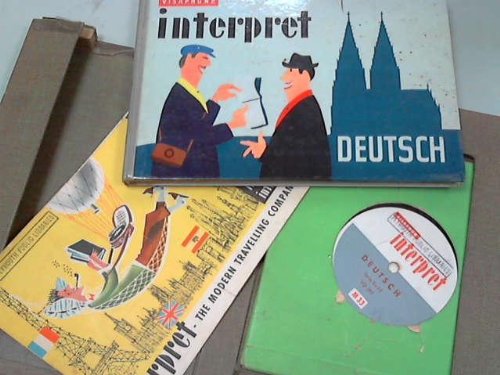 These courses were destined for the self-instruction of would-be travelers to the regions where the target language predominated. The course manual was divided into sections dealing with the customary activities of greetings, travel arrangements, dining out, banking, and the like. A significant, but not overly-present introduction to the destinations and the cultures preceded each section. The target language was presented in dialogue form accompanied by a literary translation. Sketches embellished virtually every page of the book. There were no explanations of grammar or other notes and no glossary. 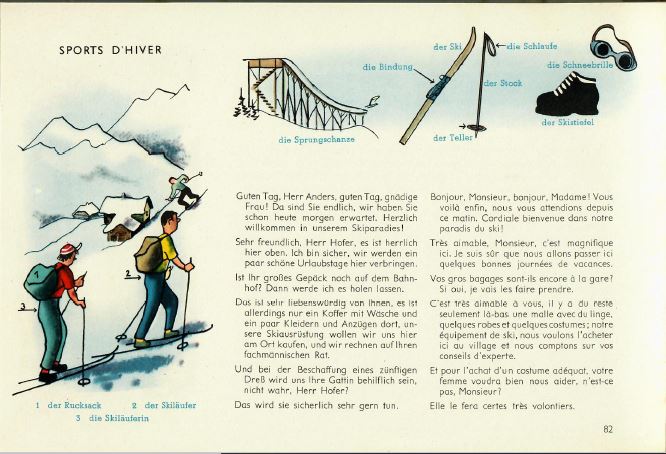 The accompanying bilingual glossary contained skeletal notes on a few elements of the target language’s grammar; however, these would have been insufficient to developing a clear understanding of the structure of the language as deployed in the dialogues, which operated at approximately with the CEFR A2 range. As was the case of the more in-depth Visaphone courses (the Children’s Dictionary version), the lessons in these materials do NOT appear to have been progressively-more-difficult. With only 45 minutes of audio recordings, these courses provided limited opportunities for developing solid aural/oral skills. Perhaps their chief value would have been in providing additional support to users of the Children’s Dictionary materials.

World and Press / Revue de la Presse / Revista de la Prensa / Leggere l’Italia /
Unsere Zeitung (Presse und Sprache)
Not really courses per se, these packages of (annotated) extracts from newspapers, accompanied by translations, were available for annual subscription in support of the study of: English, French, German, Italian, and Spanish. Each monthly issue contained: (a) two booklets, of 50-odd pages each, and (b) 2 x 7-inch x 33-1/3 rpm EP vinyl records, for a total duration of approximately 30 minutes. I do not have a copy of these materials and have not come across any reviews of them. Nevertheless, given the nature of the materials (extracts from newspapers, translations, audio recordings), I would imagine that they operated at the CEFR B2-C1 level. UPDATE: Please refer to Kraut's subsequent comments. 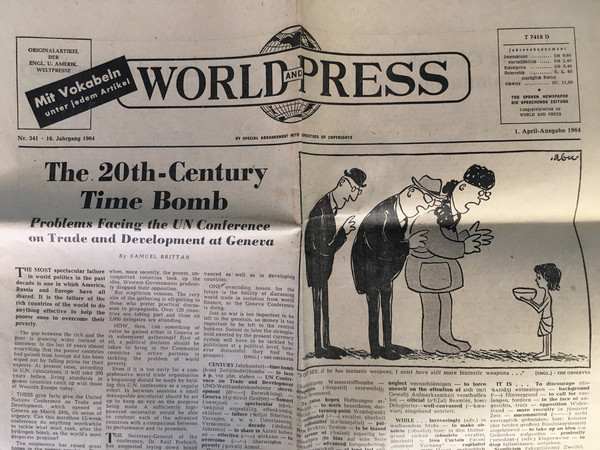 Assessment: As a Package Deal?
The approach to teaching in the “Children’s Dictionary” course represented a very “interesting departure” from the customary method for self-instruction. The inclusion of the “World and Press” materials would have made a significant difference in the potential of the package for development of the user’s reading and aural skills. I am tempted to say that, in cases where an independent learner acquired the full set of the above materials and were he/she to study them diligently, a level of CEFR B2-C1 in reading and aural skills would have been achievable. Perhaps the diligent oral practice of the audio recordings of the newspaper extracts would have brought a determined student within such a range in his/her ability to speak the language. Wer Weiss?*

Sprachzeitschriften we called them at Gymnasium, and grammar schools in Germany have been their main target group. We took out class subscriptions.

Thank you, Kraut, for the additional information on the Visaphone materials. Using the links that you provided, I tracked down the names of the other newspaper supplements and updated the original post. In addition, I believe that I have located the current edition of these aids to study: 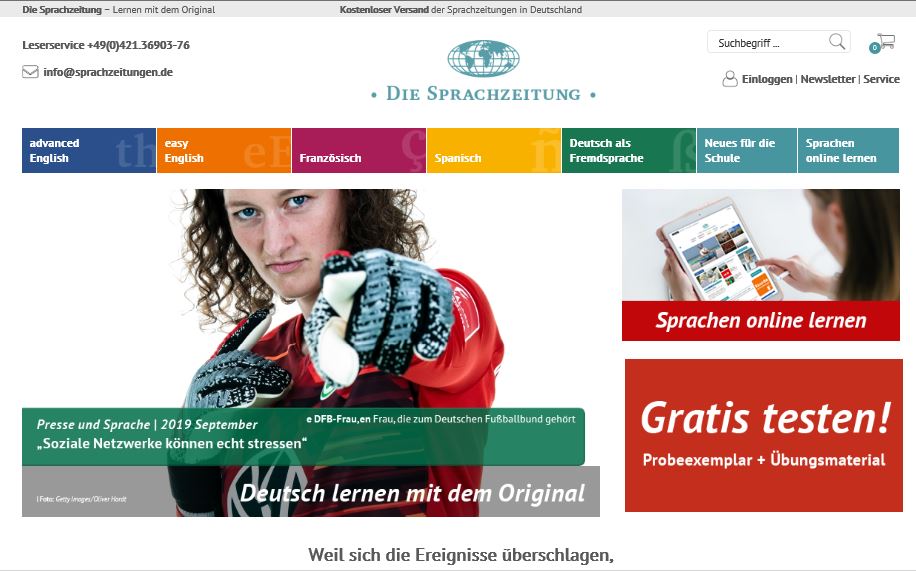