All about language programs, courses, websites and other learning resources
Post Reply
451 posts

Vingt Mille Lieues Sous les Mers
My only knowledge of this novel came from my childhood memories of the Disney movie, so I was expecting a straightforward adventure tale, with plenty of action. That's not what I got. After the first few chapters, which set up the premise--the protagonists are trapped on a submarine as it circles the globe--the book settles into a episodic format, with each chapter presenting a single incident from the voyage. I'm guessing this format was due to the serialized nature of the original--the self-contained nature of each chapter means that you don't have to remember what happened in the last chapter--but it really robs the story of any forward momentum. You could shuffle the chapters into any order and it wouldn't make any difference.

One other problem with the novel is the passive nature of the protagonists. They spend the entire story as prisoners, and don't ever do anything to advance the narrative. To make things worse, they don't even leave the submarine that often. Entire chapters are spent as the narrator describes the things he sees out the Nautilus's window, which makes it feel like you're reading a story about someone watching TV. There are also endless passages of descriptions of various types of marine life, exhaustively cataloged according to their genus and species. You get the feeling that Verne did a lot of research on the ocean, and made sure to include every bit of it in the novel. One English translation I referred to simply deleted a lot of this.

I can see why the novel was such a hit in the nineteenth century--the idea of exploring the oceans in an impossibly futuristic (and luxurious) craft must have been incredibly appealing to people who had never seen a Jacques Cousteau special on TV. But there's not much that would appeal to the modern reader.

The novel's French is somewhat easier than other nineteenth century works I've read, with the exception of all the scientific terminology. And it has the advantage of being in the public domain, so there are a couple of audio versions available on Librivox. But there are probably better novels (even among Verne's work) that are more worth your time.
5 x
French double SC movies:
French double SC books:

Thanks so much for your support and enthusiasm; it is greatly appreciated.

Yes, to Jules Verne and thanks for the in depth review of Jules Verne.
1 x

Sometimes when you finally read a "classic" work of literature, it fails to live up to all the hype. This was not the case with Madame Bovary. This is both a beautifully written and psychologically penetrating novel.

Two things struck me the most while reading this. First, how good Flaubert is at sketching a scene with just a few telling details. The house the Bovarys lived in, the village, the pharmacist's shop: I can still picture them in my mind well after finishing the novel. And he does this without long, expository passages that might slow down the story.

The second thing was how real all the characters felt. They all seemed like real, flawed humans reacting to the events around them. And again, Flaubert pulled this off without endless pages spent entirely inside the characters' heads (see: Le rouge et le noir). He knows just which morsels of information to give the reader.

As for the French, this was the hardest thing I had read up to that point. I soldiered through several chapters before deciding to use an English translation (found online at Project Gutenberg). I would read each chapter in English while listening to the French audiobook, then immediately re-read the same chapter in French, again while listening to the audio. Obviously, this ended up taking a lot of time, but for this book at least it was worth it. I think this is a good way to read books that are still a bit beyond your level. And by the time I got to the end, I was able to read just the French (whether this is because my French got better, or I just got used to Flaubert's style, I don't know).

Has anyone else read this? What did you think?

An 1872 novel by Alphonse Daudet which tells the story of a comic figure ("Tartarin" of the title) who has a reputation as a great hunter and adventurer in foreign lands, despite never having left his village. This is the first of three novels about this famous character, in which he finally decides to go to Algeria to hunt lions. Although the book tells a continuous story, each chapter covers a single episode, and is often structured like a joke, complete with punchline in the final paragraph.

I found this to be a lot of fun, and it was quite short and readable compared to other nineteenth-century things I've read. It made a nice break for me between Flaubert and Stendhal. The French itself uses quite a few obscure words I didn't know, as well as bits of Tartarin's local dialect, but I think these elements were mostly used to add flavor to the narrative, since I was able to follow the story while skipping the parts I didn't understand. It also helped that I was reading an edition for students, in which a lot of unfamiliar vocabulary is explained in footnotes. I recommend reading this along with the audiobook, as the narrator's delivery makes things funnier than they would be on the page.

Many thanks for the suggestion; sounds like a good book to look forward to.
0 x

Has anyone else read this? What did you think?

I have tried to read this novel three or four times, but never got past page 10.
But now I will try listening to it, which can be a totally different experience.
The voice in your reference, that of Nadine Eckert-Boulet, sounds pleasant, and I have just downloaded the file from Librivox and will give it a try sometime soon.
Thanks.
2 x
Tu sabes cuando sales pero no sabes cuando regresas.

Mork the fiddle, Welcome Back! We missed you!

When you say:I have tried to read this novel three or four times, but never got past page 10. I confess that that has been my experience and I never finished it.
2 x

OK, here we go. The big one. If you asked a bunch of French people to name a French literary classic of the top of their head, I think a significant number would come up with Stendhal's novel. This is one of those "everyone has to read it in high school" books.

The novel tells the story of Julien Sorel, and nearly the entire narrative takes place in his head. Unlike Flaubert, Stendhal makes no attempt to describe what people or places look like--it's all about what characters (mostly Julien) are thinking. About halfway through I said to myself, my god, he's actually trying to put an entire human being into a novel--not just their behavior, but their whole internal life. I don't know if he's the first novelist to try this, but he's probably the first to succeed this well. I have a feeling that the plot is not that important in itself; it's mostly a device to show how Julien thinks and reacts in a variety of different situations.

I greatly enjoyed parts of Le rouge et le noir, while other parts left me cold. This is probably more due to my poor French and lack of knowledge of French history and politics than to any faults in the book, however. One scene which stands out is one in which Julien is on his way to an assignation with a woman. He suspects the whole thing is a trap, and envisions assassins lurking in every shadow. The whole scene, in which his imaginings get more and more ridiculous, is absolutely hilarious, partly because it fits so well with what we already know of his character.

I found the French to be at about the same level of difficulty as Madame Bovary. As with that book, I read this while listening to the audiobook, although this time I didn't read the English first. Instead, I referred to the English only when I got in trouble with the French (which was quite often).

Although this Alexandre Dumas fils novel isn't widely read today, I think everyone has seen some version of the story. It's been made into movies (I like the Greta Garbo one), TV shows, plays, a ballet, and most famously Verdi's opera La Traviata. The trope of someone making a grand, romantic sacrifice for their lover, unbeknownst to that person, originated here.

The French was the easiest I've encountered in a nineteenth-century novel, so this might be a good place for learners to get their feet wet in this century's literature. The only minor difficulty is the fact that the imperfect subjunctive is used quite a bit, although you get used to it pretty quickly. Also, I have to admit that I got impatient with the book about halfway through, probably because I know the story so well. But I'm glad I stuck with it--the ending is genuinely moving.

Finally, a fun anecdote: when the novel became a hit, a journalist asked the author's father (the famous author of The Three Musketeers among many other things) if he had helped his son with the book. His reply: "Parbleu! j'ai fait l'auteur!" 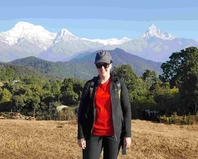 The following are just some simple books that I enjoyed and found to be the right level for me as an upper beginner / lower intermediate learner:

Coraline - Neil Gaiman
Not originally in French. Even though it's a childrens book, I found the story charming and engaging.
Recommended Level: A2-B1.
https://www.amazon.ca/Coraline-Wiz-French-H%C3%A9l%C3%A8ne-Collon-ebook/dp/B07QY5B6ZS