Stefan wrote:I'm in. Die Zwerge by Markus Heitz is on my reading list but maybe it's too long (600+ pages) for this kind of project.

I enjoyed the previous German reading group with Tintenherz but felt like maybe we didn't make the most of it. As readers fell behind, we went silent and there wasn't a lot of incentive to keep up. Is there anything we could do to improve it in this reading group? Discussions and speculation after each chapter might be overkill but whenever a GoT episode finished, I rushed online to see people speculate about every small clue. The risk of spoilers also made sure that I tried to watch each episode as soon possible.

Glad to have you on board! I'll add your book suggestion to the list although you may be right; 600+ pages might put some people off (although Tintenherz is not far off 600 pages).

I think the best way forward is to have a strict deadline for finishing a chapter. So maybe it runs Monday-Sunday then we can discuss the chapter we've read from the following Monday?

Just a note to say that I think Die Zwerge is a much denser text than Tintenherz - it's written for adults and, if I remember correctly, has smaller font. Also, Der Rückkehr der Kriegerin that I recommended is absolutely massive. The first chapter is about 90 pages long, so on reflection it's also probably a bad suggestion.
0 x

I could definitely be tempted to take part. The problem I had with the Tintenherz readalong is that the book is quite long, and despite the promising opening I found myself getting incredibly bored with it halfway through and in the end I just couldn't finish it. YA and children's literature is generally not my thing, however I can understand why people would go for it, and as long as it's short enough I should be ok!

Of the books already suggested, I could go for Momo, which is already sitting on my bookshelf, is a reasonable 268 pages long (and anyway, my German teacher insists that Michael Ende's books are absolutely not children's literature).

Another option if people would prefer something for adults would be some kind of light krimi. Nothing too long, too complicated or too violent.

I think a krimi might be more fun for those that can't stand juvenile fiction, but at the same time, crime novels tend to fit a certain formula and not be too literary, so they usually aren't as difficult as some other genres. Also, there would probably be plenty to discuss as we try to guess whodunit after every chapter, so that might keep the group more active.
2 x

Brun Ugle wrote:Another option if people would prefer something for adults would be some kind of light krimi. Nothing too long, too complicated or too violent.

Der Richter und sein Henker seems to be the book in language courses at Swedish universities. I began reading it a few years ago but discovered LWT after only a few pages so I don't know if i'ts any good. It's on my reading list.

I doubt it's a page-turner though.
2 x
Log: An ounce of action is worth a ton of theory | native material ▸

Stefan wrote:Der Richter und sein Henker seems to be the book in language courses at Swedish universities. I began reading it a few years ago but discovered LWT after only a few pages so I don't know if i'ts any good. It's on my reading list. 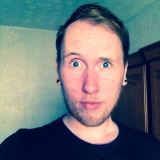 Ok, if everyone can get all their suggestions in, I'll add them to the main page and then we can all decide this week which book we're going for

If you go for Der Richter und sein Henker I may join you. I read this book ages ago, but I don't remember much about it, only that I really enjoyed it, so I would not mind re-reading it.

I see you don't have any works by Kafka on your list yet. If people haven't already read them, I'd recommend both Die Verwandlung, which is only about 70 pages, and Der Prozess, which is longer, 200 pages or so.
2 x
Ich grolle nicht

"Together with Dürrenmatt's The Pledge: Requiem for the Detective Novel, these stories are considered classics of crime fiction, fusing existential philosophy and the detective genre."

I read Der Richter und sein Henker, Die Verwandlung and Im Westen Nichts Neues a few years ago and enjoyed all of them.

Disclaimer: I don't work for Audible and don't even much like Audible because it can be cantankerous at times, but for us in the USA it's easy enough to order from them, and they do have an iOs app (and maybe other OS's?).

I read the three books using LingQ or LWT, I forget which. Neither handles German split verbs well, and for that reason I won't use either again for reading German.

Thanks to Reineke for several interesting suggestions.

aspiringpolyglot wrote:Ok, if everyone can get all their suggestions in, I'll add them to the main page and then we can all decide this week which book we're going for