On the topic of Emma, there are a few adaptations that people might like to watch (and perhaps boost super challenge numbers). I don't know how easy it is to find dubbed versions, so might be for people with English as a TL.

Emma (film), ft Gwyneth Paltrow. - Honestly I think this is pretty terrible, but as far as I know it was reasonably successful.
Emma (TV, BBC), ft Romona Garai and Johnny Lee Miller. - I think this is great and would absolutely recommend it. It's pretty faithful to the book as I remember and very watchable. Plus, they're both very attractive.
Clueless (film). - For anyone who hasn't come across Clueless, it's a modern adaptation of Emma, set in a US high school. It's great fun. It stands alone as a film and I think a lot of people didn't know it was an adaptation (the plot changes quite a bit, though the fundamentals are the same I would say).
2 x
Corrections appreciated.

Mista wrote:Who will be reading Emma, and in which language?

I'll be reading it in English. I generally like to read books in the original language (in fact, it's one of the reasons I'm into language learning), and I'm not even halfway with last month's book, so I think this is the only way I can do both.

I had intended to try reading it in german while listening to english audio (I recently watched a Prof Arguelles video where he suggested that among other things), but I've just downloaded an english language copy from a german library (?), so I'm taking that as *A SIGN*, and I'll read in english.

I'm enjoying Emma. Every chapter seems to provide one or two slightly odd phrases that jump out at me, today's were:

That was jarring. So WRONG.

"...and Emma was quite in charity with him."

kanewai wrote:Can you explain more? “And when he had drunk his tea” sounds like standard spoken American English to my ears.

Yes, that's what I would have expected, but that's not what Ms Austen wrote.
0 x

Yeah, the first sounds really wrong these days. The second though, sounds archaic and I wouldn't ever say it, but doesn't sound wrong to me.
0 x
Corrections appreciated.

MamaPata wrote:Yeah, the first sounds really wrong these days. The second though, sounds archaic and I wouldn't ever say it, but doesn't sound wrong to me.

No the second was just odd. I had to look up charity in the dictionary to decide quite what she might have intended.

charity |ˈtʃarɪti|
noun (pl.charities)
1 an organization set up to provide help and raise money for those in need. the charity provides practical help for homeless people.
• [ mass noun ] the body of organizations viewed collectively as the object of fundraising or of donations: the proceeds of the sale will go to charity.
2 [ mass noun ] the voluntary giving of help, typically in the form of money, to those in need. the care of the poor must not be left to private charity.
• help or money given to those in need: an unemployed teacher living on charity.
3 [ mass noun ] kindness and tolerance in judging others: she found it hard to look on her mother with much charity.
• archaic love of humankind, typically in a Christian context: faith, hope, and charity.

The Metamorphosis of Apuleius (a.k.a. The Golden Ass) - first look. It took me awhile to find the right book. I ordered one in Italian off Amazon, but it turned out to be in Latin - only the introduction was in Italian. I don't know what the second one was - for the most part it seemed to be the right book, but the first section was set in the Renaissance, and not classical-age Greece and Rome.

I finally settled on a hard copy with Latin on one page, and Italian on the facing page. I'm not even close to understanding the Latin, though it's been fun to look up the naughty bits and see how to say those.

And for those who haven't started the book yet - there are some very naughty bits! I can see why Apuleius is not taught in high school Latin. There aren't any noble heroes, but there is a black magic sorceress who steals Socrates' heart (literally) and pins the narrator down with her foot and urinates on him (seriously). It's actually refreshing to read a novel that hasn't been impacted by 2000 years of religious morality.

I'm also surprised at how "modern" the structure of this novel feels. There is the main narrative but also stories within stories, there is a meta-narrative, there are puns and ironic asides in the original Latin (which I only catch thanks to the book's footnotes) - it reminds me a lot of Don Quijote, only in The Golden Ass the magic is real. I've always been taught that Don Quijote was the first modern novel. I'm not so sure right now.
7 x
fr: Margeurite Duras, Un barrage contre le Pacifique:
it: Indro Montanelli, Storia dei Greci:
es: Santiago Posteguillo, Y Julia Retó a los Dioses:
el: Assimil, Le grec:

Le metamorfosi - Libro IV. This novel contains many stories within stories, and in book 4 we finally get to the most famous one: The Story of Cupid and Psyche.

I don't actually know this story; I just know it's famous because every single major museum in Europe seems to have a massive oil painting, marble sculpture, or Roman miniature dedicated to these two. 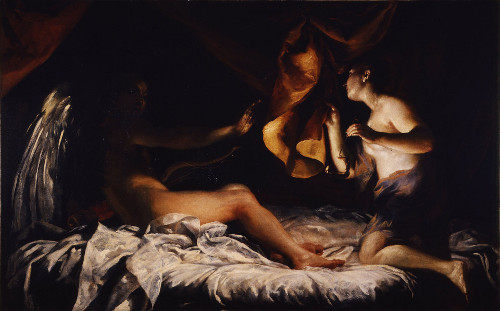 I've been enjoying Apuleius so far, but this side story takes the book to a whole new level. Here's a spoiler-free look at the action (all this occurs in the first couple pages):

Psyche, a mortal, is so renowned for her beauty that men are abandoning their shrines to Venus to come visit her instead. They even say that Psyche is a new Venus, but born of the earth. The goddess is not amused:

(But look at me, ancient mother of nature, born before the elements, I, Venus, nurse of the entire world, I have to split the honors that are due to my majesty with a mortal girl, and to see my name, that which is has it's place in the heavens, profaned by the vulgar earth!)

She sends her son Cupid down to take action, and this is not the cute little Cupid we see on Hallmark greeting cards:

(And she immediately sent and called her son, the one with the wings and without scruples, the one who with his indecent behavior ignores public morality, and who goes around to the houses of others, armed with arrows and flames, ruining every marriage, and who commits the worst scandals with impunity, and in short, who never does anything good).

Psyche, meanwhile, is depressed because all the mortal men come to admire her, but no one actually talks to her. Her father consults Apollo's oracle at Miletus (side note: which I've been to!) - and receives a dark command:

(On top of a high mountain, dressed as for a wedding, leave your daughter, o king, for a wedding without life.
Do not expect a son-in-law of mortal origin, but a poisonous monster, ruthless and deadly)


And cue action! The story of Cupid and Psyche is only 75-90 pages (it takes up four of the libri in Apuleius) so if anyone doesn't have time to read the full book they can probably find this story in most languages.

If anyone else is reading Apuleius, and is wondering just what the heck they just read in Book VIII, this abstract might be interesting: Gender Transgression and the Politics of Representation in Apuleius' Metamorphoses. (Evelyn Adkins, submitted at the 2015 Classical Association of the Middle West and South (CAMWS) meeting). I haven't found the whole article yet.

For those who aren't reading the book: In Book 8 the ass Lucius is bought by a priest of a gay orgiastic cross-dressing sex cult. On one hand, it's a pretty amazing look at a part of Rome I have never heard of or read about. On the other hand, it is not sex-positive, and the action is graphic and horrifying and ... funny?

(note re: Sed postquam ... ) I have to really work to understand the Latin, but this sentence gives you a good sense of the wordplay that gets lost in translation. It's a reference to Iphgenia, daughter of Agamemnon. The king sacrificed his daughter to the goddess Artemis to secure good winds for his fleet during the Trojan War. At the last minute Artemis rescues Iphgenia and substitutes a stag for her body. So the play on words here is that the priest's 'girls' didn't get a 'cervam pro virgine' (a virgin in the shape of a deer) but an 'asinum pro homine.' (a man in the shape of an ass).

Here's a Penguin Classics translation I found on-line. The language here is a lot more cringe-worthy than the Italian version I'm reading. You've been warned.

Taking delivery of this new member of the family he led me off
home, where as soon as he got indoors he called out: ‘Look, girls, at
the pretty little slave I’ve bought and brought home for you.’ But
these ‘girls’ were a troupe of queens, who at once appeared jumping
for joy and squealing untunefully in mincing effeminate tones, in the
belief that it really was a human slave that had been brought to serve
them. When they saw that this was not a case of a hind substituting
for a maiden but an ass taking the place of a man, they began to sneer
and mock their chief, saying that this wasn’t a servant he’d brought
but a husband for himself. ‘And listen,’ they said. ‘You’re not to
gobble up this nice little nestling all on your own - we’re your lovey-
doveys too, and you must let us have a share sometimes.’ Exchanging
badinage of this sort they tied me up next to the manger. They also
had in the house a beefy young man, an accomplished piper, whom
they had bought in the market from the proceeds of their street
collections. Out of doors he tagged along playing his instrument when
they carried the goddess around, at home he was toyboy in ordinary
to the whole establishment. As soon as he saw me joining the
household, without waiting for orders he served me out a generous
ration of food and welcomed me joyfully. ‘At last,’ he said, ‘here’s
somebody to spell me in my loathsome duties. Long life to you! May
you please our masters and bring relief to my exhausted loins!’ When
I heard this I began to picture to myself the ordeals that lay ahead of
me.

It gets worse. So much worse.

one more edit, because I have to share this. I looked up the Latin cinaedus (from the sentence Sed illae puellae chorum erat cinaedorum; but this chorus of girls were cinaedorum). And found this: cinaedus. From Ancient Greek κίναιδος (kínaidos, “catamite”), originally referring to a non-Roman dancer whose performance featured movements of the buttocks. The word's ultimate origin may be from a language of Asia Minor.