Have you seen Vera Chytilova's film Daisies? She was an avant-garde Czech director who was still making films in the 2000s. Daisies (or Sedmikrásky in Czech) is a 'new wave' film that is very different from the French sort of new wave. No highly-strung dialogue. It aims to overturn female stereotypes and attacks 'bourgeois decadence' in a hilarious way. It's pretty radical and must have been abysmally so in 1966 because the Czech authorities banned it. The two main actresses were amateurs, non-actresses actually, who do an excellent job.

She also made a film with the intriguing title: The Inheritance or Fuckoffguysgoodday, but I haven't seen that. You can watch Daisies here. It's a good print.

I watched a couple of Imamura (Shōhei) films over the last week - I'm currently on his 1979 film Vengeance is Mine (復讐するは我にあり). That thing has happened again where I think I ought to go back and learn Japanese, because the subtitles on this are abysmal and miss out chunks of the dialogue.

If you've seen Imamura's films before, you know who he is. If you haven't, he's like a sort of Japanese Ken Loach of Japan's cinematic new wave. Looking at the seedy, murkier side of life and Japanese society. Amorality, messy relationships, murder, violence. Poetic films in their own way however.

Will I ever learn Japanese though? I keep watching the films and complaining to myself about the subtitles.
3 x
Extensive reading - One book a month for 2022:
Duolingo Esperanto from French - for fun:
La nuit s'achève et quand vient le matin, la rosée pleure avec tous mes chagrins.

I watched a couple of films Friday/Saturday. First one Le Grand Bazar (1976). This is a very silly film, not what people would think of as a 'French film', but many like this exist outside of those navel-gazing films sold to the world market. It stars 'Les Charlots' who were a comedy musical group in the vein of The Monkees. They made a string of this type of film. They look extremely scruffy in that mid-1970s way where it always looked like no-one had a comb in the house and decent barbers had all retired.

It's funny though and even has main roles from distinguished actors like Michel Serrault, Michel Galabru. Coluche also plays a role. Also a lot of motorcycle riding and stunt-work (courtesy of équipe Remy Julienne). The huge number of slapstick sight gags actually work and are funny, though it makes it somewhat cartoonish. The main plot was that a giant supermarket opened across from the tiny café/épicerie run by Galabru threatening to ruin him, and they try to save it. This is reminiscent of the kind of plot you got from those Children's Film Foundation things in the UK, shown during the school holidays. Funny film though I enjoyed it.

Second one: Frank en Eva: Living Apart Together (1973). Hugo Metsers (mostly in his underpants), Willeke van Ammelrooij (looking alluring and de-robed a lot) , Sylvia Kristel in her first film (very young and beautiful and de-robed a lot). This would be called today a 'comedy/drama'. Lots of funny bits in it, lots of weird bits, lots of having it off, some serious bits. This is post '60s Nederland where the old social restrictions have been beaten down. I do like watching these to look at NL as it used to be. The first time I ever passed through this country was on the way down to Belgium with my parents and brother in the early 80s. A lot closer time-period wise to how it looks in this film than how it is now. But I can't claim any familiarity with the country from then, so it's all second-hand to me.

Quite a lot of Dutch films are not overly subtle shall we say. This is meant to be a bit bawdy so it's not a yardstick, but broadness is common in Dutch films as well as a particular sort of humour. This is from the same year as the Netherlands' most famous film Turks Fruit, so was probably buried by it. The plot is very thin and mainly about freedom and responsibilities in an everyday social way. I also enjoyed this for what it is. A time capsule mostly.
3 x
Extensive reading - One book a month for 2022:
Duolingo Esperanto from French - for fun:
La nuit s'achève et quand vient le matin, la rosée pleure avec tous mes chagrins.

This is without doubt the most fascinating film I've seen yet this year. I don't even want to reveal too much in case anyone chooses to watch it (maybe you've seen it?). This is what film is for and there's trickery and revealing the trickery of film language at the same time; in the same story and at the same time, see-sawing you between real and dramatised. It's crazy. It's a really sympathetic humanising of a people and society far away from the usual western mentality (Iran 10 years after the revolution). In the end a universalising and humbling sort of experience all-round.

The story is based upon real events and bizarrely even portrayed by those who were involved. So the line between reality and dramatisation is already blurred from the start. It is poetic and philosophical and lightly touches on sociological themes.

I liked it so much I've got the same director's earlier The Traveller lined up as the next film.
4 x
Extensive reading - One book a month for 2022:
Duolingo Esperanto from French - for fun:
La nuit s'achève et quand vient le matin, la rosée pleure avec tous mes chagrins.

A Polish short - 30 mins - made as a graduation for the Warsaw Film School, but it got an Academy Award nomination for Best Live Action Short Film. Sadly didn't win, but it did win at the Atlanta Film Festival.

The pacing of the film is excellent. Usually I start on shorts and feel agitated because they tend to be by someone who really wants to make a long film and only ends up making the introduction to one and calling it a 'short'.

A young chamber maid with achondroplasia (dwarfism) has a dull life and feels treated like a circus freak in a small town. By chance she meets a truck driver who stops overnight at the hotel and they chat and he asks her on a date, for after he returns from Kiev in four days. This date is what she's telling her chamber maid colleague about after-the-fact. She wants to wear a dress for the date, but her tailor who makes specialist clothes for her can't do it in time, so she's upset, but the colleague helps her to fix up a dress.

The truck driver is late, but arrives. The date starts good, but goes badly wrong. In fact I could barely watch and it was quite saddening and a tear actually came to the corner of my eye. Brilliant film though, deserved its recognition.
4 x
Extensive reading - One book a month for 2022:
Duolingo Esperanto from French - for fun:
La nuit s'achève et quand vient le matin, la rosée pleure avec tous mes chagrins. 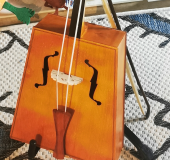 This is a Vietnamese movie. The movie starts with Phuong, she was a criminal in Saigon, but she stopped because she was pregnant. She then lived near the Mekong. She worked as a debt collector while her daughter went went to school. Phuong's daughter is kidnapped and Phuong chases the criminals to find her daughter. It's like 'Taken' but with martial arts; Phuong studied Vovinam when she was young. The acting is good, the choreography is amazing and it's well written.

I saw Furie a long while back. It is very good.

Why have you changed the title to this: 'Not the Real HTLAL Film Club 2015' ?
0 x
Extensive reading - One book a month for 2022:
Duolingo Esperanto from French - for fun:
La nuit s'achève et quand vient le matin, la rosée pleure avec tous mes chagrins.

Le Baron wrote:Why have you changed the title to this: 'Not the Real HTLAL Film Club 2015' ?

I didn't, the person I quoted did in the second post in this thread. I didn't realise it automatically added that as the title when I replied.
0 x
FSI Spanish - Programmatic:
Post Reply
51 posts