David1917 wrote:Request
Is there any other reasonably good course that follows the format of Colloquial or TYS that has NO romanization beyond the introduction, that is to say - dialogues/narratives followed by explanations and exercises? I think the Thackston/Elwell-Sutton courses will be good 2nd stage grammars, but I still want to enjoy some new learning passages. It's a shame that Elwell-Sutton's version of Colloquial Persian was entirely romanized, I suspect working through 2 books by the same author in that manner would be fantastic.

Have you looked at "Modern Persian" by Simin Abrahams?

It was used for teaching Persian to first year students at Edinburgh University and it has audio cassettes. Sample page from lesson 10: Hashimi wrote:Have you looked at "Modern Persian" by Simin Abrahams?

It was used for teaching Persian to first year students at Edinburgh University and it has audio cassettes. Sample page from lesson 10:

That looks great. I added it to my Amazon list the next time I need to add something new to Persian.

After the first few lessons it introduces the script and you get in each chapter a long series of narrations, grammar, pattern exercises, and a conversation. Full pages of Persian in the later lessons. There are four CD's which boast almost 5 hours of recording, but I'm sure once you take out the silent gaps and some French instructions it will be less than that - but they must have recorded the entirety of the material.

The website says this is Volume 1, but it was published in 1997 and no news about a Volume 2, so who knows. Either way, I need to get my French up to where I can buy and use this. If someone already knows French, this might be a great place to start.

However, one caveat is that this book follows the convention of writing the spoken form of Persian. That is to say, there are certain sound shifts (most notably long a to u) in colloquial speech, and this is one of the coursebooks that uses this method. Iran, for example, is spelled "irun" - something you would never see in real Persian. It's like if an English text were to teach "I wanna" instead of "I want to." 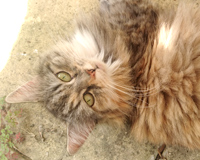 David1917 wrote:
The Sobhani Lehr- und Lesebuch that Prof A also recommends as "one of the best textbooks for any language" has an odd script (I am unsure the name - it is not quite Urdu, but certainly not typeset.) I am not at the stage in German where I can use it just yet.

Intrigued by this... I'm mostly past the point of course materials at this stage in my Persian, but I'm really weak in reading handwriting and nastaliq script. I have no German though. I wonder if it would be useful anyway just to read through some simple content in more stylised script. Could post a page as a sample?
0 x
Persian... 100 hrs listening:
10 novels: / ReadLang - 100k words: