On Linux there is a utility to conjugate verbs for French & Italian called Verbiste but I'm not sure if there is a Windows port (It would work on a Mac since an Apple machine is just a poorly disguised Unix machine). I found this utility very useful for making Anki Cards since you can copy and paste from the interface and type in any Italian (or French) verb you want. I am sure there are limits to the number of verbs it knows, but I have not encountered it. 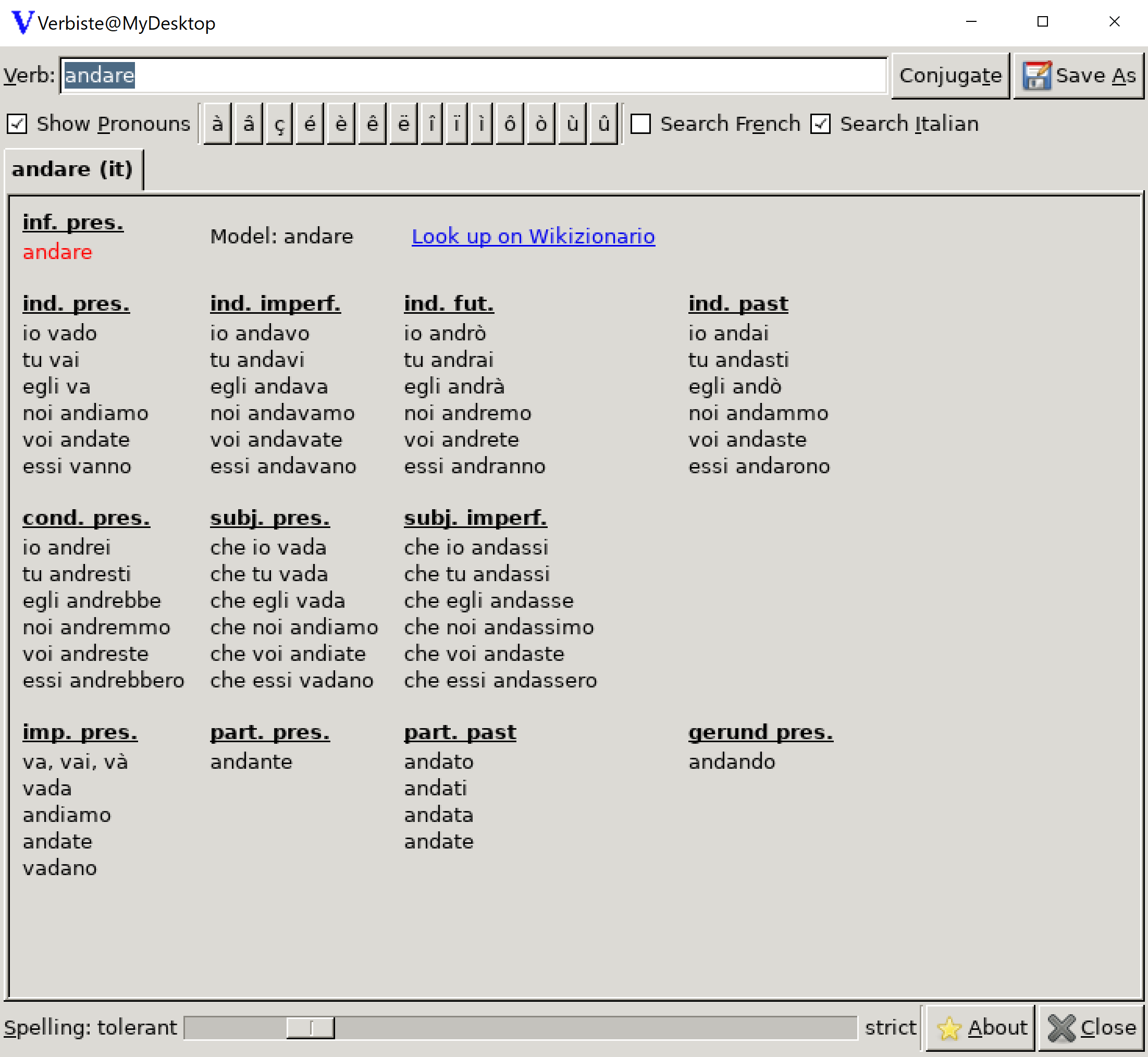 StringerBell wrote:Does this mean I should just continue ignoring those marks? It seems that both short and long vowel sounds have them, so I can't understand why they are even used at all.

That's for pure vowels. I think that diphthongs are always considered long.

So for example, here are the first two sentences from Lingua Latina: "Rōma in Italiā est. Italia in Eurōpā est".

"Italiā" is in dative ablative? case. "Italia" is nominative case. The only pronunciation difference is that you hold out the final "a" longer if it's dative ablative. The other letters with macrons are also long. The "Eu" in Eurōpā is a diphthong so that's also considered to be long. The rest of the vowels are short.

Edit: All the sources I'm finding online say that there is a vowel quality difference between short and long vowels after all so I guess I heard wrong. See also:

I'll leave it to the more knowledgeable forum members to discuss the meaning of macrons.

I have seen their use differ by textbook. Lingua Latina uses cuius (an interrogative pronoun) without any macrons, and Latin for the New Millennium uses cūius.

Once in a while, they have given me a clue.

The same thing happens in the second person singular: audīs and capis.

Fun fact: If you want to type with macrons on a Windows device, the Maori keyboard makes it very easy.
4 x
Corrections are always welcome.

So does this mean that the purpose of those macrons is to give information about the conjugation, not about the pronunciation of the vowel?
0 x
Italian: Read 5,000 pages :
Italian: Write 50,000 words :
Season 4 Lucifer Italian transcripts I created: https://learnanylanguage.fandom.com/wik ... ranscripts

So does this mean that the purpose of those macrons is to give information about the conjugation, not about the pronunciation of the vowel?

I think "cut" is the approximation given because in British English most of the "a" sounds are long in duration, and they had to pick from the short vowels and thought that the [ʌ] in "cut" was closer to the Latin short [a] than the [æ] in "cat". But I don't think I agree. And in General American English there is no vowel length distinction so it only makes sense for British Received Pronunciation. Since you speak Italian, a better contrast would be the short a in «mamma» vs the long a in «fare».

Note that the "y" is only for Greek loanwords and not all Romans would have been able to pronounce it.
4 x
español
: Pimsleur Castilian Spanish
: Assimil Spanish
: Babbel Spanish (Spain)

Deinonysus wrote:And in General American English there is no vowel length distinction so it only makes sense for British Received Pronunciation. Since you speak Italian, a better contrast would be the short a in «mamma» vs the long a in «fare».

In the Italian example you gave, I don't hear any difference between the "a" in mamma vs. fare, so I'll just trust that you're not screwing with me!

Perhaps it seems to me that the Cambridge book is using those macrons totally randomly because whatever small difference in pronunciation there is I'm just not capable of perceiving - or maybe there really is no difference for me since I speak American English.

StringerBell wrote:the Italian example you gave, I don't hear any difference between the "a" in mamma vs. fare, so I'll just trust that you're not screwing with me!

Perhaps it seems to me that the Cambridge book is using those macrons totally randomly because whatever small difference in pronunciation there is I'm just not capable of perceiving - or maybe there really is no difference for me since I speak American English.

In any event, I appreciate the help.

Okay, so that's what the problem is. I think you're just not hearing the differences. As an American English speaker myself, I also struggle with vowel length differences.

For consonant length/gemination, it can be useful to think of a doubled consonant as splitting a word into separate words. So mamma would be pronounced like the two words "mom ma" in American English rather than "mama". English does have doubled consonants, but only between words, not in them.

Vowel length in Italian isn't necessarily phonemic but depends on other factors; any vowel in a stressed, open syllable will be long. An open syllable means that it does not end in a consonant. You may want to consider dabbling in a language where vowel length is phonemic, such as Japanese, Finnish, or Hawaiian. That could help your Italian pronunciation in the long run and should also help you hear the differences in your Latin recordings. More examples of languages with phonemic vowel length are here:
https://en.wikipedia.org/wiki/Vowel_length
2 x
español
: Pimsleur Castilian Spanish
: Assimil Spanish
: Babbel Spanish (Spain)

In the past two weeks I've been more exhausted than usual, so language stuff has taken a back seat (though not completely ignored). I'm trying to work my way back up to my usual routine, but that is proving a bit difficult.

extensive reading
A few weeks ago I started extensive reading for 1 hour per day using the book Il Sentiero della Speranza (Rough Trade/Sentier Sombre). I made it halfway (200 pages) before finally deciding that I hate this book too much to continue with it. I have a high tolerance for reading junk in foreign languages that I'd never read in English, but I can't tolerate this one. It's not the worst thing I've ever read, it just doesn't work for me for some reason. I was trying to push through it, but I really don't want extensive reading hour to become torture-and-punishment hour, so I'm giving up on it for now. It's a shame because there is really a ton of useful colloquial language/slang, so I may try to resume it later once I've forgotten how much I dislike it.

I switched over to Dolores Claiborne in Italian for my extensive reading hour. I've already read it in English and Polish, so I was hoping that would help it to go a bit faster. I'm not a huge fan of this book, but at least I don't hate it. The familiarity with the story is helping, but there's still a ton of words that I don't know and can't guess. So, what I decided to do is to set my timer for 1 hour and read as much as I can, underlining in pencil any words I don't know or can't easily guess. After the hour is up, I look up those words and put the most interesting or useful ones into Anki. Yes, I'm back to Anki, though I have a feeling I won't stick with it for too long. As of now, my plan is to continue reviewing these new words with Anki until I finish the book, then reread the book a second time to see which words I can remember when I encounter them in context again.

At this point, I think the process of looking up unknown words and phrases is what's helping me the most. Some of what I've learned from Dolores Claiborne:

other reading
I decided to revisit the Diary of a Wimpy Kids books I've already read and read them once again, this time pulling out any particularly useful expressions or unknown words/phrases. I just do a few pages at a time, and I find this to be relatively easy and relaxing thing to do since these books are at the right reading level for me and I've already read them a few times.

listening
I bought a few audiobooks, including a Diary of a Wimpy Kid that I haven't read. Out of curiosity I wanted to see how well I could figure out any new words from context, since this is something that I generally can't do well with most auditory input. I thought I would have a good chance of success with this audiobook because the language is relatively simple and the pace of the storytelling is slow enough that I have time to mentally register a new word before I lose it. I was able to get a couple of words like casello (tollbooth or exit, I'm not sure) and ciucco (pacifier).

The one I'm most impressed by was the construction sta per + infinitive (is about to + ____). There was a part of the audiobook where an author had written a letter to Greg saying that his new book is about to come out. I realized this is something I had no idea how to say, so I did a little investigating on Reverso Context and found lots of similar example sentences like "il mondo sta per finire" (the world is about to end) and "il film sta per inizare" (the movie is about to start). This is my new favorite construction, and I keep trying to use it with lots of different verbs.

My main issue with listening to the audiobook without text is attention; I don't really like listening to audiobooks (even in English) unless I'm doing something else like driving or doing dishes. I find it really hard to stayed focused on auditory-only input. It's a good thing it's less than 2 hours long!

speaking
I had a LE this week, and even though I was making plenty of mistakes, I did notice some improvement overall in the vocabulary and constructions I was using. I find speaking really draining. Not only speaking in foreign languages, but even speaking in my native language. I often need a few hours of downtime after an hour long call even in English. For this reason, I decided that no matter how ambitious I might be feeling, I would not to do more than 1 call per week per language. What I can do is increase the Italian speaking that I'm doing at home, something I know I should do but tend to avoid out of frustration and laziness.

POLISH:
I had two LE in the last 2 weeks and my ability to speak any Polish at all seems to have evaporated. I don't know what happened. I don't seem to know how to say even very simple things that I used to know how to say. I'm hoping this will pass and for now I'm trying not to get too discouraged.

I just started listening to some podcasts with transcriptions on this site: https://ioannesoculus.com, which is fantastic! I'm trying to ease myself gently back into Polish after my break and rather than experiencing a Bow Wave Effect, I mostly just feel rusty and out of practice. It feels like I forgot most of what I knew, but I know from experience that this is only temporary.

I listened to podcast #36 Gdy Brakuje Czasu about 6-7 times and was pleasantly surprised that the only words I didn't know were:
obowiązków = obligations, duties, responsibilities
poświęcać czas = to take the time, to dedicate time
zaoszczędzić czas = to save time
czasochłonne = time consuming

Then I saw that the podcast was labelled as A2. Really? I thought for sure it must be at least B1, so I guess I have no idea how to the gauge language level of a piece of writing. I guess understanding it wasn't that impressive after all!