I'll show you an example. There is, of course, audio played on both sides of the card, but I will skip it in this presentation 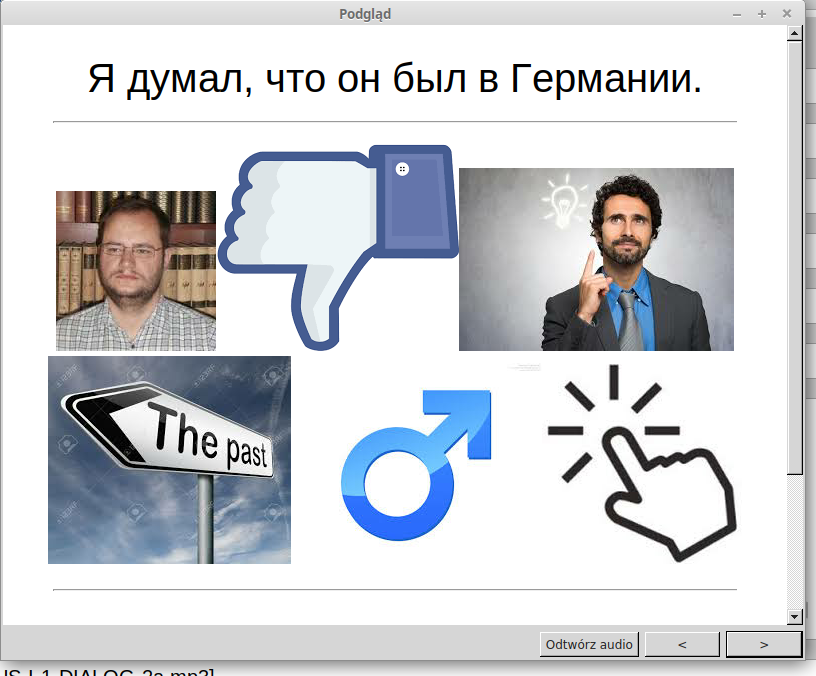 This is the front side of the card. I'm using my photo to indicate that I should use the first person in the answer

Other pictures are mostly subjective associations with the words I should use in my answer to that. 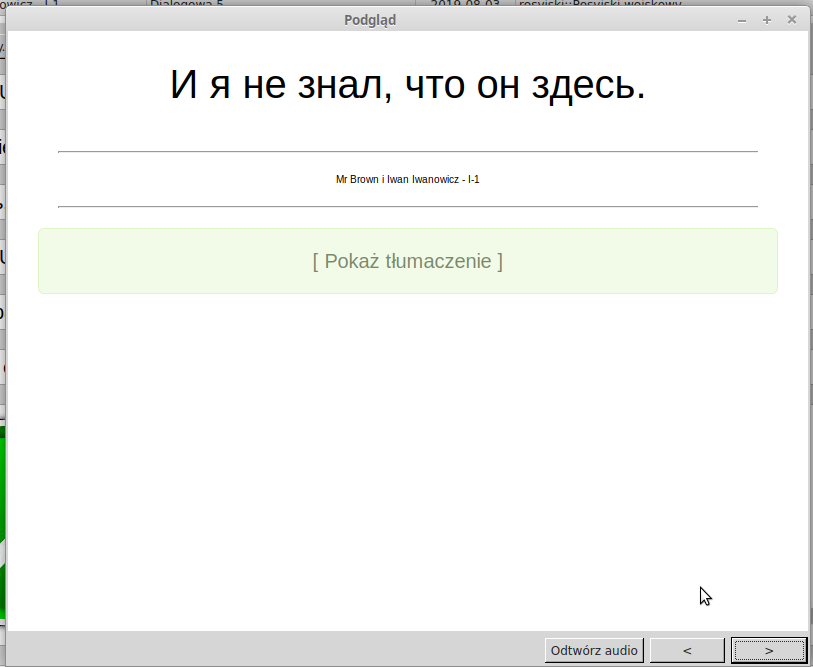 The backside of the card is much simpler - it plays audio and displays the answer. There is also the button "pokaż tłumaczenie" ("show the translation") that, after being clicked, shows the translation of the phrase. It is also in the front of the card but was below what I cut from the screenshot.
6 x
Please feel free to correct me in any language

I have not started the Assimil Dutch, by the way. I've been distracted by Spanish and by being on holiday.

Several of us read Odinsbarn a few years ago. I must have liked it better than you did, because I would wanted to read the trilogy. But I never did. Now I'd have to go back and reread Odinsbarn (in Danish) before I could read Råta, and I am not sure I really want to invest in that effort.

Do you generally like YA Fantasy? I am not a huge YA fan, but I like some of it.
1 x
Corrections are always welcome.

Makes sense, when you're changing them constantly. However, I noticed that adding the target languages to the log title increased the number of readers.

Morgana wrote:Anyone else apply the concept of "spoiler alert" to their languages? Going step-by-step through learning a language can be quite interesting and suspenseful, and then I will (quite knowingly on my behalf) read logs of fellow learners of my TLs and get spoiled by things I don't know yet

Obviously I'm joking, no one should hold back in what they write of their language experience! It's just something I didn't experience while learning Swedish (or Icelandic) but now I run into it a little bit with Russian and German.

I remember some discussion about the sin/sina thingy, which was a bit ahead for me (like 2-3 chapters in Rivstart). But it definitely works better with languages you don't know that well yet.

Morgana wrote:Because obviously there are a ton more people learning those languages than were/are learning Swedish (and/or Icelandic)! In fact about a month or so back I did a text search on the first 20 pages of logs (sorted by most recent post) and there were only three logs that explicitly listed Swedish as a target language, and of them none of those posters were as active as I am on the site. Also, none of those learners had Swedish as their primary or main target language. Outside of that, there was one learner whom I knew was learning Swedish as their main TL but didn't list it in the log title, but this person lives in Sweden. Knowing there were so few people learning Swedish as a main TL without living there gave me pause... but maybe that's something I can talk about later (or not!).

You for sure found my log in that search.

I haven't really done anything for a while and it doesn't feel good to just write, that I haven't really done anything, except for living my life, speak Spanish every now and then at the language cafe and notice when people speak Swedish on the streets... Oh and I once tried Swedish at the language cafe. But my Swedish was horrible. I probably will take another course again, just to proceed at least in any way.
I did similar searches for Finnish some time ago, you don't get that many results either. But it's probably more than Swedish due to the "Finnish with extra Mühe" project. Another issue is, that, most learners never got as far as I did. (I know one exception here?). Especially I have never read of any learner in this forum who actually worked in Finnish. (Anyway, I now such people in real life here.) I don't know whether you may have a similar problem with Swedish. (?)

Morgana wrote:There are a lot of similarities with Swedish, more than with English I'd say at this stage. I have enjoyed the transparency but at the same time that transparency can feel boring, like I am not discovering anything new.

Let's say it from my point of view: there's no language that felt so easy to learn as Swedish. It's extremely close to German, and if I don't know a word through German, it's likely I know it through English or Finnish (because Finnish has quite an amount of Swedish loan words.) Even the grammatical forms... like irregular plurals are similar in German (such as land, länder). Honestly, when visiting Sweden without knowing Swedish at all, there is a good chance of guessing the meaning, if it's written.
May German feel as a relaxing walk through a park as Swedish feels for me.
At least there is plenty of media in German available, so that you could just make use of the language.


Btw. I'm still reading book three of the Ravenring-trilogy. I stopped last year when I moved to Finland, but recently reread one chapter and continued with one more. So I see those "spoilers" of the second book more as a nice reminder what has happend before.

3 x
Corrections for entries written in Finnish, Spanish or Swedish are welcome.
Project 30before30:

We have the same system in the Scandinavian languages, so it will help you since you're into Swedish as well. I can agree that the numbers 10:30 reads most easily as "ten thirty", but if you're looking at a clock face, it's just as logical to view as something related to eleven (and it's getting even closer to eleven while you're looking at it...). Also German has it. Halb elf is half an hour before eleven, i.e. 10:30. We look into the future.

jeff_lindqvist wrote:Also German has it. Halb elf is half an hour before eleven

(it's from the notes I made when I was trying to learn German on my own in the early 2000's). The fact that Russian has it too doesn't make things easier for me