You want pain and suffering? Check out her La Douleur by M. Duras.
1 x

I leave for Mexico in three days, and I actually feel less confident with my Spanish than I did last month - even though it's been my main focus all month.

courses: Lesson 50 of FSI Spanish Basic Course had drills using the imperfect subjunctive plus the conditional tense to indicate an improbable future action ... and I actually understood it. The conjugation was so regular that I found it much easier than other less-advanced skills. I'm not sure I could actually use it in real life situations - but I can definitely drill it! Meanwhile, I am getting destroyed by all the irregular present and past-tense verbs over in Kwiziq. I've been supplementing these with work on Speakly and Lingvist a couple times a week.

It's insanely satisfying watching my Kwiziq brain map slowly get filled in: 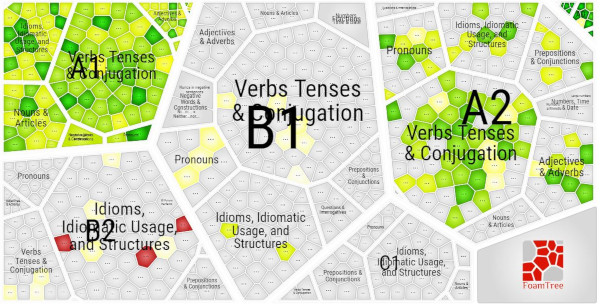 book: Fernando Aramburu, Patria. I've been studying more, and reading less, so I'm only a third of the way through this book. So far I'm really enjoying it. It's set in the Basque country before, during, and after the period of terrorism. It follows the lives of two families, which could have been cliched, but the characters are so fully drawn, and feel so completely real, that we are drawn into their lives.

audiobook: Gabriel García Márquez, Cien años de soledad. Narrated by Gustavo Bonfigli. I listened to the first half a couple years ago, and am finally getting around to finishing it. Each generation recycles the names of the previous generation, and I get lost trying to keep track of all the José Arcadios and Aurelianos. In the audiobook I am often hopelessly lost. This is a book I admire more than love.


French
book: Ibrahim al-Koni, Les mages. I've stalled a bit, but intend to restart and finish one I'm back from Mexico.

courses: I haven't done much this month, but try to do some exercises from Une dictée par jour, Kwiziq, or CLE International a few times per week. My main focus will be on French for the next couple months, and I hope to fill in a lot of the map: 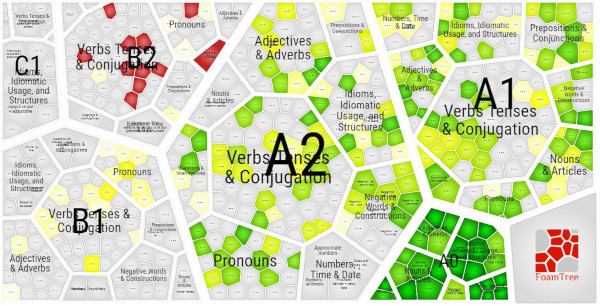 
Arabic
course: Memrise has so much potential, but it's killing me. I wanted to at least finish one level, but I spend 90% of my time now on the reviews, and never make any forward progress. The other programs (Speakly, Lingvist, and Kwiziq) will have you review difficult words. Memrise thinks I have to review every single thing five times a week, plus do pronunciation practice, plus do it in a lightning round. I just took a look at the site, and it tells me that I've 'learned 227 words - and it wants me to review 82 of them, plus an additional 31 "difficult" words. I'm just wasting time at this point.


Others
I've been playing with Turkish on Memrise, and it's also frustrating - but I know more Turkish than Arabic, so at least I can do the reviews faster. Some of the drills are absolutely ridiculous, though. One "word," for example, is: o ... (-dir; -tir). The answer is:
he's; she's; it's; that's. Now, I know what they're aiming for here, but if you didn't know some Turkish this would make zero sense. And drilling on this out of context is useless.

I've also been doing occasional German drills on Lingvist and Speakly. I'm not investing a lot of time in it, as I think I would need to do more focused study to make any real progress, but it's enjoyable. One day, some day, I really will focus on German.

I just listened to a podcast series on classical Greek drama, and now I'm dreaming of Athens and Sparta and Thebes. It will probably be a couple years before I'll have enough vacation time to take a proper trip to Greece (I want a whole month so that I can dive deep), but Greek will be my focus language once I have the time!
4 x
Spanish:
Alain Damasio, La Horde du Contrevent:
Italian:

I actually came out of post-op isolation (not pandemic related) just in time to go into Corvid lock down. I have to remind myself that this isn't just surreal for me, it's surreal for everybody.

I was doing intensive French focus, in preparation for a tourist trip to Morocco and a longer work assignment in Marseille. I really enjoyed focusing so much on one language again, but these trips have obviously been delayed. I'm not really in the mood for an intense focus on anything, but I do have lots of time, so I've actually gone back to juggling too many languages.

Spanish
I did two months with Kwiziq, and am now just doing one quick session with Lingvist each day. I'll rotate these two with Speakly as the mood hits me.

Earlier this year I finished Patria, by Fernando Aramburu. It's set in the Basque Country following a peace agreement between ETA and the government. It's really well written, and I highly reccomend it.

French
I was doing really well with Kwiziq, then hit a wall. Right now I'm working on finishing up Phonétique progressive from CLE International, which has been surprisingly useful.

I'm trying to read La Horde du Contrevent, a sci-fi novel by Alain Demasio. It's hard to get a grasp on the plot, since there are dozens of characters and he makes up a lot of new words. I'm enjoying it, but it's a struggle.


Italian
I've been trying to use Speakly daily, which is more of a diversion than an actual course. At some point in the future I might look for a good quality intermediate course.

I just gave up on Q, a thriller set during the religious wars in Germany in the 1500s. It was too hard to follow, as it jumped around in time every couple pages. I spent more time on Wikipedia trying to untangle the history than I did reading the book. I felt like the book was more interested in political arguements than in telling a story. The author is an anonymous collective of leftist radicals, which should have been a clue to me that it might not function well as a novel.


Arabic
I was going to give Assimil on honest shot, even though I find the Arabic voice recordings painful. But they are currently not delivering to my area. I do not know if this is virus related or not.


German
I picked up my old Assimil course and am slowly working through it. Last time I failed because I trusted that I would actually passively assimilate genders and cases and declensions. I did not. This time I am paying more conscious attention to them.

Russian
Why not. I bought the Penguin Russian Course. So far I am only on the alphabet.
8 x
Spanish:
Alain Damasio, La Horde du Contrevent:
Italian:

kanewai wrote:German
I picked up my old Assimil course and am slowly working through it. Last time I failed because I trusted that I would actually passively assimilate genders and cases and declensions. I did not. This time I am paying more conscious attention to them.

Genders and especially case endings are precisely the wall that I have hit on all my previous attempts to study German. I'm now using Assimil like you are, and I'm making a lot of effort paying attention to endings. E.g. in lesson 44 why does it say "in die Tür" on line 7 but "in der Tür" on line 8? On my first readings I didn't even notice the difference because I was simply reading for understanding. For the past week (since that lesson) I've been trying a lot harder to pay attention to endings and ask myself questions about them. So today's lesson (lesson 48) had "in einer halben Stunde" in exercise 1.2. "einer" is accusative dative but why then "halben"? A google of the phrase dug up that the feminine accusative dative of "halb" is "halben". If you're trying to simply assimilate, you'd never get that!
Last edited by jeffers on Wed Apr 01, 2020 1:22 pm, edited 2 times in total.
3 x
Waiting for the next Super Challenge ... ... ...

jeffers wrote: So today's lesson (lesson 48) had "in einer halben Stunde" in exercise 1.2. "einer" is accusative but why then "halben"? A google of the phrase dug up that the feminine accusative of "halb" is "halben". If you're trying to simply assimilate, you'd never get that!

I think you mean dative

I also think it's well worth having a look in a grammar book now and then for stuff like this. The thing about case endings is that they don't mean anything in and of themselves - they only make sense as part of a system. So if you don't know what the system looks like, you'll never get anywhere. I don't mean that you should memorise the declination patterns, just that you should have a look at it and notice how it works. For example, that "der" is the nominative with masculine words, but the genitive/dative of feminine words. On the other hand, it's reading, writing and speaking that will make it stick eventually.
3 x

I also had great difficulty with using Assimil for German because of the way it handled cases and declensions. I think if it's not something you're used to, it's pretty difficult to "assimilate" since you've got no way of knowing what you need to notice, and there are a lot of similarities between case markers.

These days, the difference between "der" as masculine nominative and "der" as feminine dative is as clear to me as night and day, since I'm very comfortable with when I should expect to see a nominative or a dative, but back when I was a beginner in German it was incredibly confusing.

What helped me crack the problem was working through the Begegnungen textbooks, which are fairly standard traditional textbooks with a good emphasis on grammar exercises, and I think they present the cases in a very logical, progressive way with plenty of practice at each step.
2 x

I once made a green sheet to illustrate the system (and now I just hope that I haven't made too many blunders in it). I know that the Germans put their cases in another order (and to boot name them as case no. 1,2,3 and 4), but here - as in any other language - I show the cases in this order: nominative, accusative, genitive and dative. The grammatical terms are of course in Danish, but for a student of German they should be easy to understand. One minor quirk: the column marked "N" contains the substantival endings - which mostly are zero. I use the sign ¤ (cirkel with a cross) to refer to neutrum, the other two genders have of course their own standard symbols. 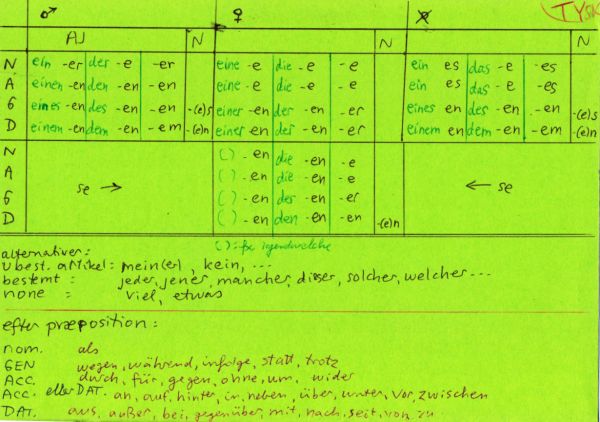