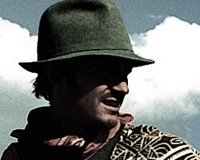 Saw this quiz on Xmmm's log and tried it out. I'm not too thrilled with the result. I feel like the current way that I'm using Readlang is helping. Perhaps I can use this as a tool to gauge progress. 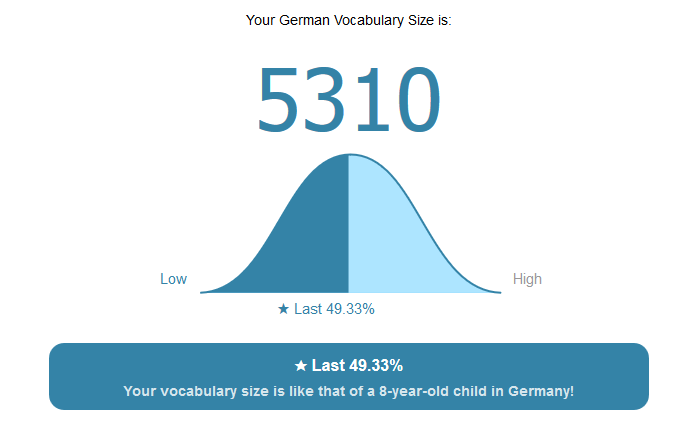 I wanted to see how this compares to English, and well, that's a nicer message to get.

The karaoke party went well. I planned on singing two songs in German, but ended up doing only one. I wanted to sing Nur Ein Wort by Wir Sind Helden, but the video was slow in showing the lyrics, and I didn't know the song well enough to overcome that. It's too bad since this was the rare video that showed an English translation, which would have been helpful since no one else spoke German at the party. Part of the deal is that in exchange for throwing these parties, people have to sit through me singing songs that no one can understand.

The song I ended up singing was Chöre by Mark Forster. It went alright. Part of the issue is the chorus has the line "Die Chöre singen for dich!" and in the regular song, a choir comes in and sings the refrain. But in all of the karaoke versions, there is no chorus and it loses the effect.

I enjoyed the comment from my friend, Ben: "But who's this Dich person?", suggesting that he understood more of the song than I would have expected.

Does anyone reading this have a go-to karaoke song that's in a language that they are learning (and is not in English)?

No Screens at Night experiment

In other news, I'm in the middle of a little experiment that doesn't have to do with language learning directly, but is impacting my learning process. For February and March, I am locking up all my screens after the sun sets. I will not have access to them until the sun rises the next day. I'm achieving this by using a device called the Kitchen Safe, which has a timed lock. It's big enough for my various phones and tablets. I have a couple computers that are too big, but I put those in a backpack and lock the zipper and throw the key into the Kitchen Safe.

My reasons for this experiment is multifold. Though the primary thing is exploring is how my sleep and general well-being will be affected. Sleep because of blue light from screens preventing the release of melatonin. Well-being because with the current state of news, I could too riled up. I think having a large period of the day there are no updates from the outside world. The only sources of stimulation are the things immediately around me.

I'm also interested in seeing how my habits change if I don't have access to these devices for large chunks of time. I was concerned that it may inhibit some of my learning progress, because my main German activities involve screens: SRS, reading in Readlang, listening to audio from German movies, and watching videos.

While I am having less time with some of those activities, I'm finding time for others. Since I have to devote much of my daylight hours to work, any extra time I have I spend on spaced repetition. This means that I don't have time for watching anything. However, I'm finding more time for reading while using a monolingual dictionary. I'm currently reading the 2nd Harry Potter book, a graded reader about Till Eulenspiegel and a set of pdf's called Das Parlament which teaches kids about the Bundestag and other current events.

With this "extra" time, I'm finally going through my textbook from the German class I took during my last semester in college which got me started on this journey. It's called Deutsch: Na klar. It's not great for self-study, but it still has an okay number of exercises. I'm going through and typing up questions to import into Anki (I have a word processor called Dana which has a non-backlit screen. It's actually what I'm typing this log on). On one hand, it feels a little silly to go through content that is entirely elementary. On the other hand, I'm still enjoying the process of breaking down content for spaced repetition material. I've been doing SRS for eight years now (mostly for non-language materials), and have gotten pretty good at it. It feels like a digestive process, like being an enzyme breaking down a piece of food into it's component parts, while shunting off the rest as waste.

Weirdly, my study recently has felt more deliberate recently. Maybe it's because everything feels quieter in the evenings and I can feel more intentional with how I'm spending my time.

I haven't updated in awhile, and unfortunately, I don't have much to report. I haven't been taking care of myself well recently and am having difficulty focusing on anything (Taking time out for a long walk in the woods seems to help me rebound). I'm slowly making my way through a Harry Potter book. I watched a Tatort episode called Meta. My wife and I started watching Babylon Berlin, which I was pleasantly surprised to find is now on Netflix. We are watching it with English subtitles and though I tried ignoring them, I found the process of listening to the German and then frantically checking the subtitles to see how well I understood to be tiring. After we are done, I'll probably watch it again just in German.

I got an e-ink reader that runs on Android, so that I can use Readlang and Anki in the evening without a backlit screen. It's a bit slower than I would like, but it's useful for my no-backlit-screens-at-night experiment.

I had an anxiety dream that I showed up to a German class, but it turned out that I was supposed to teach it. It did not go well.

That's it for now. Hopefully, I'll have more to report next time.
2 x

neuroascetic wrote:Does anyone reading this have a go-to karaoke song that's in a language that they are learning (and is not in English)?

In my senior year of high school I discovered Spanish-language dubs of Disney movies and I learnt both versions of "Let It Go" by heart. My plan was this year to learn all the songs from Frozen and maybe The Little Mermaid, but that fell by the wayside. I need to refresh my knowledge of "Libre Soy" and "Suéltalo" so I can sing them on command if asked. It's a little silly to think I'll need that knowledge, but hey, if I ever need to go to a karaoke party...
1 x
"He's satisfied with himself. If you have a soul you can't be satisfied."
- Graham Greene (given to me by @reineke)

eido - I once did a scream-o version of Let It Go in German. It was around 2am and my voice was already shot. You should learn Libre Soy. Being able to do 99 Red Balloons in German has been a hit on multiple occasions.

​
I’ve been watching a lot of Babylon Berlin with my wife recently. I just found out that it’s based on a series of detective novels that came out about a year ago. I’ve added them to my birthday list (the German ones, not the translations). I’m undecided on whether I want an ePub version that I can add to Readlang, or hard copy.

I’ve been using this software called Skedpal2 recently to help me schedule my day. The way it works is that you feed it a list of tasks along with an estimated time to complete them and it will schedule it out for you. Simple enough, but what makes it really useful is that it is also deals with recurring tasks and preferred times for tackling tasks very well. What I like about it, is that I don’t have to decide what I should be doing, I just do whatever it tells me and then later in the day or the week, I reflect on how my priorities should be adjusted. However, in my first week of using it, I have found that it hasn’t reserved much time for my German activities, so I’ll have to play around with it to make sure those tasks are prioritized (It scheduled me to update this log).

Otherwise, I’ve been keeping up on my Anki and Subs2SRS activities and re-listening to audio from movies I’ve seen. I’m reading a book called Gabriel Knight 2: The Beast Within. It’s a novelization based on a video game that I loved in the 90’s with the same name. The story takes place in Munich and is in English, but it’s been satisfying to understand every bit of German that is dropped into the text. A good deal of the book has to do with Ludwig II (and a supposed lost opera written with Richard Wagner), which has me wanting to watch the Ludwig movie that came out in 2012 (even though it received poor reviews).
1 x
Post Reply
15 posts