Thanks, nooj. A lot could be said about your last couple of posts but I fear that would lead us far way from the forum's boundaries. Still, wanted to let know I appreciate you taking the time to transcribe and post these.
0 x

A series of videos became viral in the Catalan language sphere a few months ago, originally uploaded on TikTok. I've been waiting, hoping they'd put it up on YT, but they never did (and I asked!) so I took the outrageous move of taking just two of these videos, uploading it and putting English subtitles on it. If you would like to see the full set, you can watch them on Twitter here.

The theme is repte de paraules (word challenge). One woman is from Amposta, a city in the south part of Catalonia, another is from Girona, in the north east part of Catalonia. The distance between the two is about 270km.

As you will see in these two videos, the differences in words and expressions are quite significant. The Girona dialect belongs to the Eastern dialect block, specifically of the Central variety, the Amposta dialect forms a subsection of the North-Western dialect block, closely related to the Valencian dialect block. In the following map, you can place Amposta in the Tortosí dialect area (sometimes called a dialect of transition between Valencian and Catalan).

Mallorcan is the dialect I speak and it's an Eastern dialect. So as expected the Girona dialect is far more similar to Mallorcan (galleda, escombra etc). But acotxar-se (Amposta), does resemble a Mallorcan word, acotar-se with the same meaning.

Here is another video, this time showcasing Valencian dialects, one person from Xàbia in south Valencia, the other from Benicarló in the north. Between the two, a distance of 260km. You can see more videos of this set by looking up #reptedeparaules + valencianes.

The Xàbia dialect is a Meridional dialect (green coloured on the map), the Benicarló dialect, at the topmost part of Castelló, forms a part of the Tortosí dialect (transitional dialect) like Amposta. 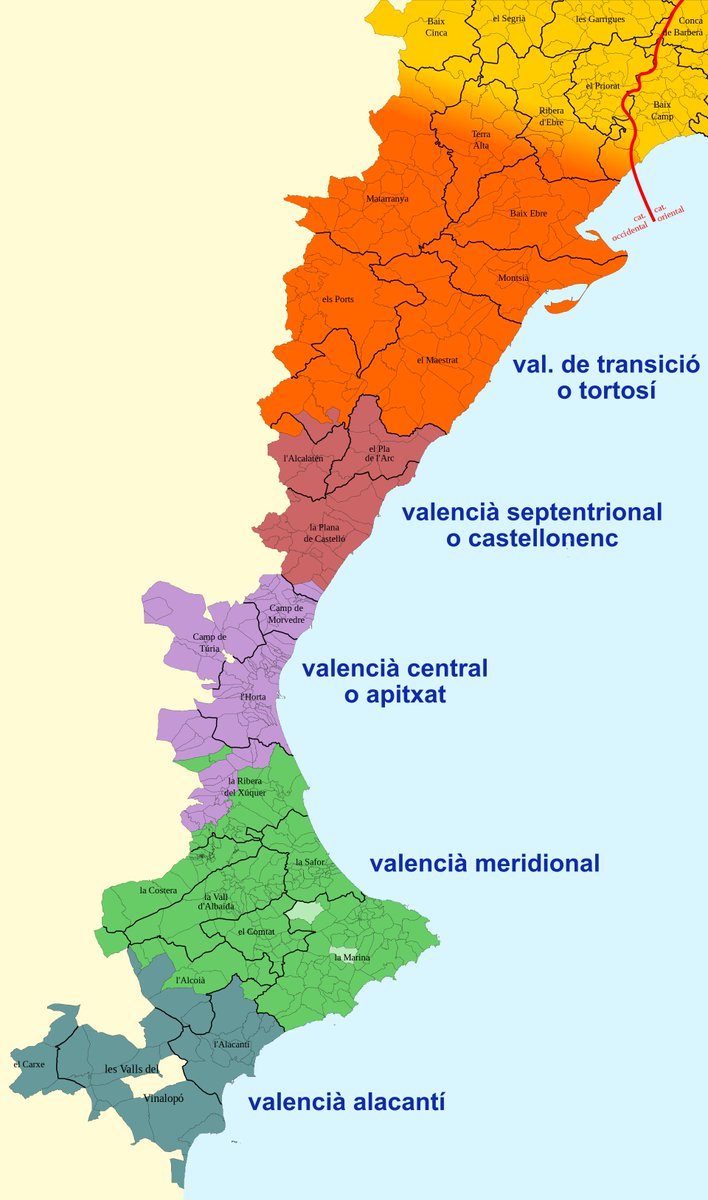 So, what's the point of all this? To celebrate dialectical diversity of course. Catalan is rich, very rich, and one can spend one's life learning about the differences from town to town, city to city, province to province, country to country where it is spoken.

There was a bit of a fuss in the comments as some people perceived the laughter of the Gironan woman as belittling the dialect of Amposta. What has to be taken into account is that the Girona dialect, as a Central dialect, is closer to the variety most televised in the national Catalonian press: many people think TV3 for example privileges the Central dialects, and does not use enough North Occidental dialects in Catalonia, or precisely the Southern dialects in the Terres de l'Ebre.

The Girona woman defended herself and said that that was not her intention at all, and I believe her. What I do find displeasing is that the Girona dialect examples are given first and the Amposta dialect is made to respond, which COULD suggest that the Amposta dialect is the one that is different from a dialect that is closer to the norm as opposed to both dialects being different from each other which is the truth. So maybe they should have alternated the order of presentation, to emphasise their equal funniness from each other.
4 x
زندگی را با عشق
نوش جان باید کرد

A really interesting interview with a Zuberoan man, by some Hegoalde teenagers. No information given about what they're doing this for nor the date, place etc.

Zuberoan is very different from the dialects I'm used to, I've said it time and time again. However, it is still recognisably Basque. No Zuberoan Basque speaker truly questions the unity of the language. However, whether it's because this guy speaks slowly or for some other reason, he is incredibly understandable. I literally understood 70-80% of what he was talking. And if it's understandable to me, a learner, then to the young Southerners who recorded him, there must have been very little that escaped their attention.

At first I thought that he must have been 'dialling back' his dialect, or accommodating to the Southerners, and there is some of that.

But he is not toning much down on that front. He has the /y/ vowel, [h] aspiration, /r/ deletion in intervocalic position etc and the full range of alternations in vowel combinations, for example etxean = etxian. And he uses Zuberoan vocabulary without concession to the interlocutor e.g. (hemen = heben) and Zuberoan morphology (naiz = niz, mintzatzen gara = mintzatzen gia).

It's an incredibly beautiful variety of Basque, no?

The interviewer asks the Zuberoan man, the situation of Basque in Zuberoa and how he learned Basque, and I want to briefly summarise.

He said that at the time of his youth when he went to school, speaking Basque was punished in school, they were forced to speak French, but luckily he had a teacher, a young priest who was also from Zuberoa and who did not punish them. Well, he clarifies, they were not allowed to speak Basque in class, but in their breaks they spoke Basque.

Among the questions that she asks the man, one is about the Basque culture in Zuberoa and he sets off on a long explanation of the Maskaradak and the Pastoralak, the latter being theatre performances with a very old tradition (one of the oldest in all of the Basque Country), involving music, dance, song, poetry. He mentions a Pastorala event 10-11 years ago where he participated, where because of his moustache, he was classified as a türka, one of the 'baddies', and had to dress accordingly.

The characters are split between the Kristiak (Christians, usually Basques) and the Türkak (usually representing foreigners, the French, English, Spanish). And the theatre has as its theme a Manichean battle between these bands.

Every year it falls upon a different town the honour of organising these Pastoralak, which go on for several hours in the town square. All of the performers are non professional, volunteers from the town, non specially picked out for their skills or anything: truly local. But not for that, unprofessional! They are carefully coreographed with love and care.

There is a script-writer who writes the pastorala, which has an important Basque personality as its central topic around which the rest revolves (before the 1950s, it could be any important religious or military personality in France, since the 50s the theme has stuck to important figures in Basque history). In the image below, the 2017 Pastorala held in the two communes of Altzai-Altzabeheti-Zunharreta and Lakarri-Arhane-Sarrikotagaine. The Basque figure celebrated was Joanikot, a captain who first helped the Castillians conquer the kingdom of Navarra and then turned on them. He defended Donibane Garazi in the seige of 1521 against the Spanish forces. He was captured, hung, decapitated and quartered. 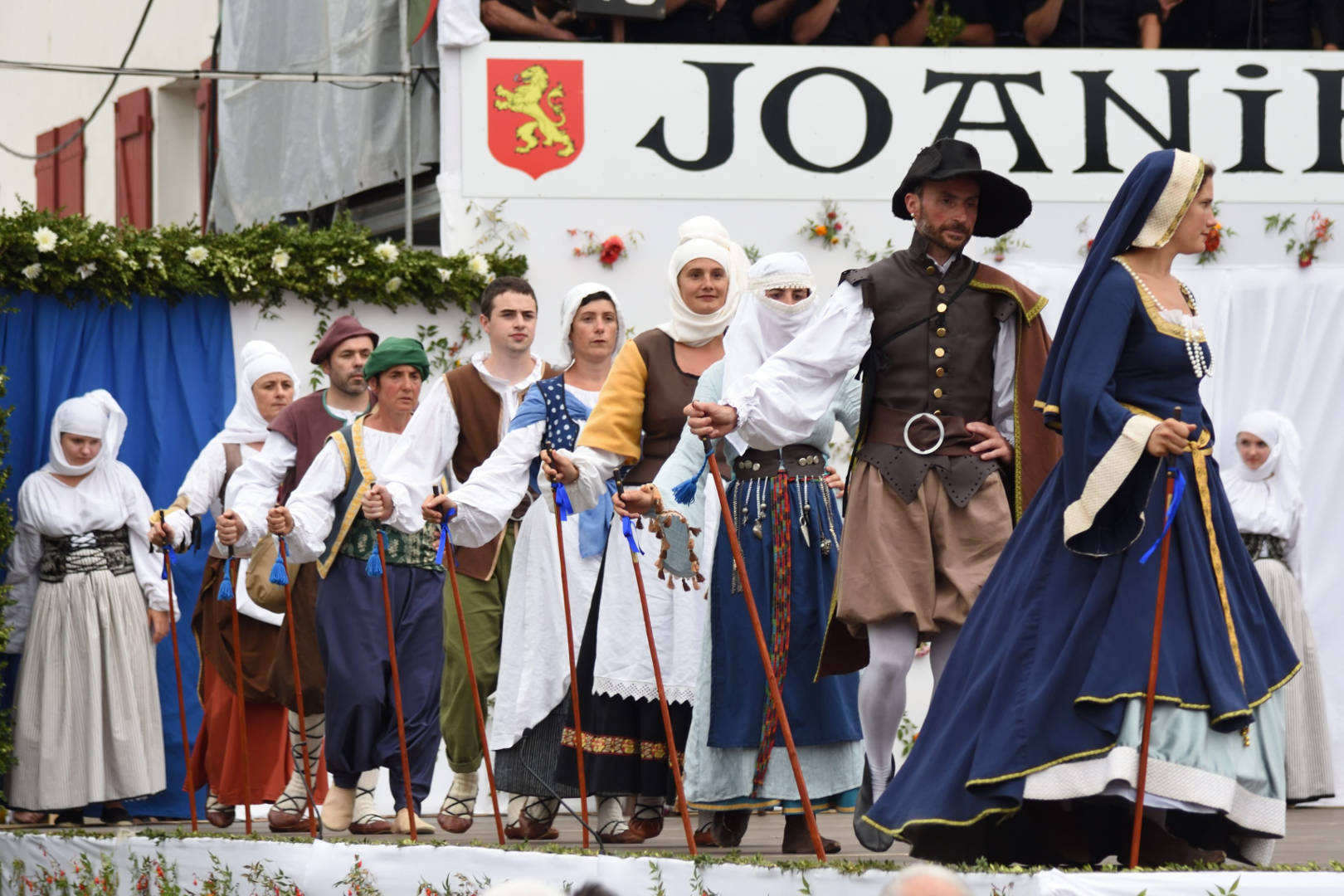 In the case that the Zuberoan man mentions in the interview, his Pastorala was about Antso Haundia (1004-1035), a very important king of Navarra. That would place the Pastorala in which he acted in 2004, when it was celebrated in Maule.

As the Pastoralak are entirely in the Zuberoan dialect of Basque, it becomes imperative finding
local people capable of writing the scripts in Basque and people capable of acting them out. The latter is getting more difficult every year as young people generally do not speak Basque, although they can memorise the script. The Zuberoan dialect is severely endangered, I've heard figures as low as 5,000 speakers. If any Basque dialect is going to go extinct in the next few decades, it will be Zuberoan.

I've never been to one of these theatrical events, but it is the pride and glory of Zuberoa. People train and prepare the entire year to perform in it. If you have the chance, you owe it to yourself to go.

This year's Pastorala was written by the Zuberoan Basque nationalist from the previous post, Jean-Louis Davant, and in a very surprising turn of events, he wrote the Pastorala around the central figure of...Abdelkader!

The Algerian leader of the 19th century who fought against French colonialism. What on Earth does this charismatic, brilliant political/military, decidedly non Christian and non Basque leader from over a hundred years ago have to do with the Basque Country today?

Tomorrow I'll post some videos/audio/lyrics of a Pastorala, and I will translate an interview with Davant where he details his reasons for choosing Abdelkader. Unfortunately due to the coronavirus, this year's Pastorala was moved to next year. But that means there is no excuse not to go...!
3 x
زندگی را با عشق
نوش جان باید کرد

nooj wrote:There was a bit of a fuss in the comments as some people perceived the laughter of the Gironan woman as belittling the dialect of Amposta. (...) The Girona woman defended herself and said that that was not her intention at all, and I believe her.

In these situations I guess a lot depends on where the laughter comes from. Here, it looked more like friendly banter than belittling another dialect. And my feeling is that it really is up to the laughee to decide if the laugher's reaction was out of place since she knows her better.
In a similar fashion, I've read/heard jokes in Yiddish that I would never even dare to repeat because I'm pretty sure they would get me labelled as an antisemite but does it mean I should tell the (Jewish) person who told them and the (Jewish) audience who laughed that they shouldn't have?
0 x
Post Reply
514 posts