I've almost finished the Guarani grammar. I think it's well set out, clearly explained in most parts and the best grammar available of Guarani either in English or any other language, which is not to say that it is complete. There are points in which the author clearly states that linguists are not sure about something, or some parts require research, and leaves it at that. If you only speak English, I think it'll be your only choice.

However, it's not a learning grammar, in the sense that there are no exercises, no repetitions, no audio to accompany it. By the end you won't have actually learned Guarani, you will have learned very roughly how Guarani works, and those are two completely different things.

In order to bridge this gap, I am starting at the very bottom, by reading whatever textbooks are freely available, the Peace Corps one for example and copying the vocabulary. There's no subtitles for any of the Guarani content on YT (there's no cartoons in Guarani either, except for people making their own dubs) so it's of no use to a beginner, but it is good to help your ear get used to the sounds, the intonation and what Guarani actually sounds like.

As for speaking practice, well, I've gone to the ice cream shop and ordered my ice cream in Guarani two times and had a basic chat (where are you from, how old are you etc) and more importantly, understood the reply of the worker in return. I suspect I'm just gonna get fat after going there repeatedly.

He taught me some expressions and my first words in Guarani: mba'éichapa, meaning good morning.

Correction: mba'éichapa does not mean good morning. It means how's it going.

From mba'e (thing) + -icha (as) -> mba'éicha (like what) + pa (interrogative particle). Literally then, mba'éichapa means 'like what?'. You can then lengthen it out.

I was so excited and still am about learning a language that is an official language of a nation-state (official since 1992) for once spoken by the majority of this country's population. I was expecting a normalised language. Because I don't particularly enjoy learning languages whose speakers rights are trampled on. I'm not inherently attracted to them!

It's been a cruel disappointment to learn over these last few days, reading many many many papers and talking with many Paraguayans online, that I will be learning yet again another minoritised language. In some ways Guarani is even more minoritised in Paraguay than the coofficial languages are in Spain.

I know it sounds paradoxical, because the majority of Paraguayans speak Guarani. How can it be minoritised? Numerically it's not.

But Spanish is still the dominant and prestigious language in many domains of life in Paraguay: education, government and administration, publishing, audiovisual and the arts, the sciences, healthcare etc. Guarani exists in Paraguay in a diglossic situation.

For example, one of the complaints I've seen from Guarani speakers is when they come to the hospital, and need/want to speak in Guarani. However a great many doctors or medical personnel don't speak Guarani or not well enough. Apparently you can't be guaranteed a service in Guarani in Paraguay. This paper puts some numbers to it. Final year medical students at the Universidad Nacional de Asunción were surveyed about their linguistic competence. Although we know that around 80-90% of Paraguayans can speak Guarani, in the study 67.9% (almost 70%!) of students said that they weren't sure if they could interpret (understand) Guarani well, and only 8.5% say that they can understand and express themselves completely in Guarani. This Spanish monolingual speaking bubble in no way reflects the general linguistic profile of the country.

Those students who say they can speak and understand Guarani are usually from the interior of the country. The interior is the more rural or the less urbanised area of Paraguay, where Guarani is by far the dominant language.

Those medical students born, raised and educated in Asunción, the capital, speak and use less Guarani than those students born, raised and educated in places where Guarani is the dominant language. The diglossic nature of Paraguay has made it possible for there to be a growing minority of Spanish monolingual Paraguayans, who don't seem to be particularly socioeconomically disadvantaged for being monolingual Spanish speakers, and in fact can be found in positions of extremely important responsibility, such as doctors.

The last trustworthy national census in Paraguay that asked about language use was in 2002. That census showed that 87% spoke Guarani, 68% spoke Spanish, 27% were monolingual in Guarani and 8% monolingual in Spanish. 1.8% speak other indigenous languages (Paraguay has more languages than Guarani!) and 2.4% speak Portuguese.

There was a second national census made in 2012 but the census bureau of the government decided not to release those figures, judging that the methodology wasn't correct. However, some information was leaked out according to which the population of Guarani speakers had dropped by 10%.

If this were true, it would be the single greatest drop in Guarani speakers in Paraguay's entire history. It might even suggest that Guarani is moving from a language in a situation of diglossia, to a language whose intergenerational transmission is beginning to fray. Warning signs? In 1982, 40% of the Paraguayan population lived in households where the only language spoken was Guarani, in 1992 that number reduced to 38.4% and in 2002, it was 28.8%. More and more parents are choosing to speak to their children in Spanish, or in a combination of Spanish and Guarani, possibly because they think that Spanish is the prestige language and guarantees social success.

Happily the vast majority of everything in this poem is grammatically understandable thanks to what I read in the grammar. The problem is the vocabulary, I have no idea how I'm going to learn Guarani vocabulary. I'm still learning hundreds of new Basque words every month and Basque vocabulary is generally well documented. The first monolingual Guarani-Guarani with 2000 entries was finalised last year, but still hasn't been published as far as I know.

What is it that
Makes a sound
Delicately, slowly
Repeatedly
Again and again
As if it is knocking
On that which is hidden
The door of my soul

It makes a sound
On those nights
When I am alone
It pokes me
It wakes me
It prickles me
It unsettles me
As if it get under my skin
And inebriates my heart...

asýva - the root asy by itself means pain, but is used in Guarani to express superlative degrees of a quality.

But at the same time, paradoxically, to express fragility, delicateness.

Who what
Human animal
The breath of God
The rabel of the wind
The spirits of the forests
Or ancient spectre
A mystery?

ravel - I think it is referring to the introduced Spanish stringed instrument, also called the rebec.

jarýi - literally means grandmother. But the 'grandmother(s) of the forest' refers to the deity of the forest. It's interesting to know that whilst ka'aguy means forest, its singular form ka'a means yerba mate, and the mate plant has an important place in traditional Guarani culture (among other things it is a widely used medicinal plant), in fact, ka'a jarýi, the grandmother of the mate plant, is a deity. 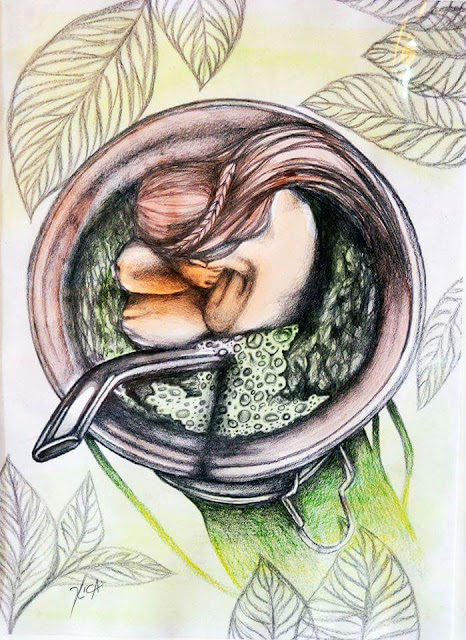 What is that
That is heard as
And sounds like a cry
When it says my name?
What is the name
Of that which calls me?
1 x
زندگی را با عشق
نوش جان باید کرد

Looking at social media, as it's always a good place to search for informal conversation, I've found that the majority, even the vast majority I'd say, of posts on Facebook, Instagram, Twitter etc from Paraguayans are in Spanish...

What I mean by this is not that they can't write Guarani. Guarani definitely can be written down. I mean that most Guarani speakers in Paraguay simply...don't.

You can write Guarani using the most casual orthography that copies Spanish rules and this is accessible to anyone who's had the Spanish language education. The orthography of Guarani is still not completely fixed, there's technically no orthography that everyone accepts and uses, and even the ones who use the officially promulgated' orthography differ in how much they adhere to it in their own writing.

As far as I know there are three novels that have been written in Guarani, although that's only one genre and there are short stories, poetry, theatre and Guarani is amply represented in Paraguayan folk music.

The absence of Guarani written literature is probably a problem at both ends, a lack of a market of Guarani readers and a lack of authors interested or capable of doing so. In their reading and writing practices on a societal level, many Paraguayans seem to be functionally illiterate in Guarani, in the sense that some of them can read/write in Guarani but choose not to. Some people of course really can't because they were born in a time when Guarani was not taught and did not teach themselves to read/write Guarani since then.

This is what I mean when I say that Guarani is doing much worse in language normativisation than many Spanish languages, including non-official languages like Astur-Leonese. Of course, Guarani enjoys a speaker base and is spoken on a day to day basis to an extent that Spanish languages could only dream about. But man, Guarani still needs so far to go!
6 x
زندگی را با عشق
نوش جان باید کرد
Post Reply
733 posts