Question, what was the general atmosphere like when you were there in Barcelona? As a tourist, did you have any problems (strikes, protests)? I'd be interested to know what were your impressions.


Yesterday, I met a French embassy worker who came to visit Australia and improve her English, she's actually living in Tangiers. We talked about our experiences living in Morocco and the political situation in Morocco and how it compared to Tunisia where she also lived.

Tunisia is probably the most well-off Arab country. Although the new democracy has problems, the people are highly politically engaged, there's much more freedom of speech, people actually have hope about the future, and expectations of their politicians.

In Morocco people keep mum. Bad-mouthing the king will get you a prison sentence. Everyone knows that he and his buddies have their hand in every business and take the profits, but most Moroccans think that an oppressive regime is better than chaos: they point to the carnage in the Middle East and say that at least Morocco isn't like that. But stability (I'd say stagnation) at what price?

Anyway, all this in French. I am much too harsh on French sometimes, it IS a lovely language in and of itself. But it still feels...like a tool. It doesn't feel homely to me like Spanish does, I have to think about the words I'm using

nooj wrote:Question, what was the general atmosphere like when you were there in Barcelona? As a tourist, did you have any problems (strikes, protests)? I'd be interested to know what were your impressions.

Nothing in particular, I didn't encounter strikes or protests, but I was there at the end of April and start of May which was before the recent events really kicked off. One thing I did notice is that compared to my first visit two years ago, the Catalan language has become much more widespread in that short space of time. I hardly ever heard it back then but this time round it seemed to be everywhere and I even met foreigners (Spanish-speaking and otherwise) living there who were learning it. Barcelona is however infamous for petty crime like pickpocketing and scams, and I'm ashamed to say I lost a bit of cash to someone who gained my confidence. My brother almost got mugged there about six years ago but managed to escape. This is nothing new though, and you just need to keep your wits about you.
1 x

I went to the txoko here in Sydney and I ordered my wine in Basque to the Basque bartender.

This group of young men, tough-looking, tattooed were hanging around the counter. One of them was wearing a jacket with the ikurriña symbol. I worked up my courage to ask him where the toilets were in Basque. He gave me a bemused look because I obviously wasn't Basque, but didn't miss a beat and told me where it was in Basque and I understood him which was more important. Also when I came back he spoke to me in Basque saying no worries when I apologised for pushing through.

The highest grade of motivation fuel for me is positive reactions. By positive reaction, I don't mean praise, I mean that they just continued to speak Basque, instead of switching to Spanish or English. I was absurdly grateful. It's the cult of the native speaker, my religion, whenever a native speaker deigns to speak to me in their language instead of switching, I get really happy.

They give free Basque lessons every Wednesday, apparently they are paid for by the Basque government. The terrible thing is that next week I move to Canberra, which is a much smaller city. I don't know if there will be any Basque people there, but I will try to find out. I'd lived in Sydney for 17 years and I didn't even know that this place even existed.

A fantastic personal rumination of a French woman on her day to day battle to use Catalan with the Catalans themselves. Article in French.

I've been dedicating the last couple of weeks almost exclusively to Catalan. I love this language so much. Maybe this is the honeymoon period and I'll grow out of it. Recently I've also been getting pangs of desire for Galician, because every time I listen to a talk or a lecture in Galician, I want to dive in head first. But no, I must consolidate my languages first. I can't move on to Galician when my Catalan still needs work.
3 x
زندگی را با عشق
نوش جان باید کرد

nooj wrote:A fantastic personal rumination of a French woman on her day to day battle to use Catalan with the Catalans themselves. Article in French.

Very interesting article, even if it does go off on a couple of strange tangents and the irony of a French-speaker complaining about speakers of another language refusing to speak it with "outsiders" was not lost on me. I could certainly identify with her frustrations after my own language experiences. With Italian there's often a similar feeling that it's considered "their language and only for them" even if the definition of "them" isn't as clear as they might think, but the status of Catalan and Catalonia in Spain do add a different dimension to the whole thing. Having never studied the language, I enjoyed reading about that.
1 x

Intensive studying of French over the past week.

Met a French woman and had a nice hour long discussion. Again, I understood everything, or practically anyway. The difficulty is saying everything I wanted to say. It's so hard to meet French speakers here, of whatever country, but the only way I'll get better is if I speak it consistently as opposed to waiting to meet tourists. Maybe I should invest in one of those video chat things? I've never done it before, suggestions?
0 x
زندگی را با عشق
نوش جان باید کرد 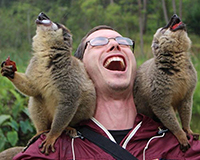 nooj wrote:The terrible thing is that next week I move to Canberra, which is a much smaller city..

Canberra is an interesting place. Lot's of diversity for its size. They even have an Esperanto meet up group (though I only ended up attending once)

Might be hard to find some Basque speakers, but I'm sure there's other cultural enrichment there for you

Your story about the Basque speaker reminded me of a situation that happened a fair few years ago..not really similar except for the amusement of the other speaker: Where I lived in Sydney had a lot of Chinese so most little convenience stores and the like are run by Chinese. I went to one of them one day to get a drink and as I was waiting in line this really old man comes up to me, points to the Chinese newspaper nearby and says in Chinese what I presume to be "Pass me the paper" which is what I do. A few people in the store chuckled and one of them asked me how I learned Chinese, much to my embarrassment I just explained I figured what he wanted from context, not because I knew Chinese

Do you meet Serbian speakers where you live?

My favourite place in Canberra so far is the IGN, to be specific, the vegetable stalls in front. So far I have met a Peruvian couple, the husband works in the Peruvian embassy, and today the best of all. I was picking through the meagre vegetable offers when I notice to my side a woman with two baby strollers, looking after her children and an elderly lady who was doing the shopping, I guessed she was the grandmother. Anyway, I couldn't help but overhear what she was saying to her children, which didn't sound like a language I'd heard before, and judging by her appearance and her children, I would have guessed Greek. My curiosity got the better of me and I asked her what language she was speaking.

This is my favourite question, whenever I hear a language I can't identify, I just have to ask.

She said Arabic, so I asked her what kind, she said from Iraq. Then I started speaking to her in my Moroccan Arabic, which I hadn't touched in 6 months, and we had a great little discussion that I honestly didn't expect.

I'd never heard Iraqi Arabic before but I find it absolutely beautiful, and look I'll be honest, I was lost a lot of the time. But the things I did get, she was from Mosul, she's been here for 1 year and takes English lessons (her English was great, much better than my Moroccan Arabic after 1 year), I think she escaped the war. She talked a bit about how Arabic from the Levant is much easier for her to understand, she understands a bit of Khaleeji, Maghrebi not so much.

She was mixing MSA into her speech as well, I suppose to make it easier for me. What was great that she did not switch to English. She continued to speak Arabic. Again the cult of the native speaker, I wanted to throw myself down and thank her for this.

The grandmother came back and I had to say goodbye, her daughter presented me to her and I saw her wry expression as if to say 'cute, now get out of my way'. I honestly wanted to ask her to teach me Iraqi Arabic (in return for payment of course), but she was a married woman with two kids to look after, I think she would already have enough on her plate than some strange Australian wanting to learn her language.

nooj wrote:Do you meet Serbian speakers where you live?

I've met a Croatian woman once long ago, but that's it really. It's fairly homogeneous here so when you see someone who isn't Caucasian, or is speaking a language other than English it stands out a bit. The biggest group of foreigners here would probably be Chinese and followed by Indian, and both of those groups would make a tiny, tiny minority here. In some ways when I go back to Sydney or stop by Canberra, it's a bit of a culture shock

In a good way though, I miss the food variety in the bigger cities.
2 x
Glossika Fluency 1:

nooj wrote:I honestly wanted to ask her to teach me Iraqi Arabic (in return for payment of course), but she was a married woman with two kids to look after, I think she would already have enough on her plate than some strange Australian wanting to learn her language.

I can't wait to go back to that market!

I love this story. :) I imagine it was a pleasant surprise for her.

If you do ever want to return to Arabic and have lessons, Natakallam is a great option -- they pair teachers who have been displaced by conflict with students wanting to learn Levantine/Iraqi/MS Arabic and Farsi (and probably a few other languages now). Disclaimer: I haven't actually had a class with them yet, but I have now been paired with a teacher and will have my first lesson in January.
1 x
Full SC Arabic Reading:
Double SC French Reading:
Half SC German Reading:
Arabic Output Writing: Speaking: