I've gotten pretty obsessed with chess lately so I've been taking a break from language learning, but Duolingo's Yiddish course just came out in beta after many years in the incubator so I think I'll give that a try. Unlike most of Duolingo's other minority language courses, this one is absolutely massive and seems to have full audio right off the bat. Unfortunately, it's a bit buggy and as I've complained about on the forums, it has very limited support for typing. Unlike most other Yiddish resources I've come across, the Duolingo course is based off of the Hungarian dialect (which I believe falls under the more general Poylish dialect). I believe this is the dialect most commonly used by the ultra-orthodox Hasidic community and thus has the most native speakers in the US. Most courses are based on YIVO Yiddish which is closest to the Litvish spoken dialect and is modeled after the literary Yiddish that flourished in the European Jewish community up until the mid 20th century, but unfortunately secular Yiddish is basically dead at this point and only the Hasidim are keeping it alive. I think it will be good for me to be exposed to both dialects. Poylish is probably the dialect that all of my great-grandparents spoke as a first language.

Although Yiddish is my ancestral language, it died out in my family (as with most American Jewish families) and I don't think I have any relatives left that speak it. I have never had that much interest in it, but I always saw it as low-hanging fruit that I should probably get around to learning some day. I've been learning so many other people's heritage languages, so why not mine? As a strong intermediate German speaker with some basic knowledge of Hebrew, I have a very easy time understanding Yiddish so I think it's a good language for me to study at the moment without taking too much time away from learning chess.

Despite the fact that many famous chess players of the 19th and early 20th centuries were Jewish and likely native Yiddish Speakers, including the first two official world champions Wilhelm Steinitz and Emmanuel Lasker, as well as Aron Nimzowitsch, the founder of the hypermodern movement, these players all published in German, not Yiddish, so I don't think Yiddish will help my ability to read chess books in the original. Oh well.

Alongside Duolingo, I have Assimil Le Yiddish lying around and I might start going through it, and I just learned that Mango Languages has made certain minority languages (including Yiddish) free, and I believe they have a driving mode so I could do that in the car alongside Duolingo and Assimil. If I'm still interested in Yiddish in a couple months and have finished Assimil, I have a copy of Uriel Weinreich's College Yiddish that I can go through. His father was fellow linguist Max Weinreich, who co-founded YIVO and was famous for his saying, "A language is a dialect with an army and a navy" (אַ שפּראַך איז אַ דיאַלעקט מיט אַן אַרמיי און פֿלאָט).
18 x
Corrections welcomed!

As is usual when I start learning a minority language, I have decided that the default keyboard layout is rubbish and I should make my own. I initially started with a Hebrew layout as a base, but I quickly realized that it makes much more sense to base it off of a German keyboard layout since Yiddish letters flow like German, not like Hebrew. My new layout works best for Yiddish but it can also type Ladino and pointed Hebrew. Unlike the Hebrew keyboard layout, this one makes use of the mighty shift key (the value with shift is in dark red on top). Caps lock switches it to a German layout (green) and the AltGr symbols are in blue.

I started Mango Languages Yiddish this morning. It seems pretty good! Not quite as good as Pimsleur but since they don't have a Yiddish course it'll do. It's reasonably comprehensive, with 96 short lessons. I took a look at the other Mango Languages minority language courses and they seem interesting but unfortunately most of them are very short, only a couple of lessons, which is sad because I was really excited that they had Tuvan. But their Hawaiian course is just as big as their Yiddish course so I'll have to check it out sometime! Their Chaldean Aramaic course is also longer than most of the other ones at ten lessons, so maybe I'll check that out too.

I read the introduction to Assimil Yiddish, but I was too tired to do a lesson. I'll start lesson 1 tonight and maybe I'll do lesson 2 as well, because I remember the early lessons being quite easy the last time I took a look at it.

I ran into the word ױגן (oygn) in Duolingo's Yiddish alphabet lessons and I wasn't sure what the corresponding German word was. I thought it was eigen (one's own), but I looked it up and it actually means "Augen" (eyes). The Yiddish word for eigen is אײגן (eygn). I knew that the "oy" sound in Yiddish corresponded to a long o in German (and in Classical Hebrew!), but I didn't know that it also corresponded to the German au sound! That led me to a very interesting Wikipedia article:

Diphthongs have also undergone divergent developments in German and Yiddish. Where Standard German has merged the Middle High German diphthong ei and long vowel ī to ei (pronounced /aɪ/), Standard Yiddish has maintained the distinction between them as /ɛɪ/ and /aɪ/, respectively. The German /aʊ/ (as in kaufen, 'buy') corresponds to the Yiddish /ɔɪ/ (in קױפֿן /kɔɪfn/); lastly, the German /ɔʏ/, as in Deutsch 'German') corresponds to /aɪ/ in Yiddish (in דײַטש /daɪtʃ/). Another difference is that the vowel length distinctions of German do not exist in Standard Yiddish.

Yiddish has some coincidental resemblances to Dutch in vowel phonology, which extend even to orthography, such as Dutch ij versus Yiddish tsvey judn, both pronounced /ɛɪ/; and Dutch ui (pronounced /œy/) versus Yiddish vov yud (/ɔj/). For example, the Yiddish "to be" is זיין, which orthographically matches Dutch zijn more than German sein, or Yiddish הויז, "house", versus Dutch huis. Along with the pronunciation of Dutch g as /ɣ/, Yiddish is said to sound closer to Dutch than to German because of this, even though its structure is closer to High German.[citation needed]

There are consonantal differences between German and Yiddish. Yiddish deaffricates the Middle High German voiceless labiodental affricate /pf/ to /f/ initially (as in פֿונט funt, but this pronunciation is also quasi-standard throughout northern and central Germany); /pf/ surfaces as an unshifted /p/ medially or finally (as in עפּל /ɛpl/ and קאָפּ /kɔp/). Additionally, final voiced stops appear in Standard Yiddish but not Northern Standard German.

Good luck, Deinonysus! I hope you'll enjoy your Yiddish learning trip. Let me know if I can help.

Good to see that the Duolingo contributors went for Hungarian Yiddish (pronunciation-wise, at least; not sure how they do things as far as grammar and vocab are concerned). I'm sure there will be much wailing and gnashing of teeth about this in some circles but it makes sense to me on several accounts.

About studying chess in Yiddish, there is a book from 1917 available through the Yiddish Book Center: Dos ershṭe Yudishe shakh-lehrbukh. Probably not up to date on current theory though

guyome wrote:Good luck, Deinonysus! I hope you'll enjoy your Yiddish learning trip. Let me know if I can help.

Good to see that the Duolingo contributors went for Hungarian Yiddish (pronunciation-wise, at least; not sure how they do things as far as grammar and vocab are concerned). I'm sure there will be much wailing and gnashing of teeth about this in some circles but it makes sense to me on several accounts.

About studying chess in Yiddish, there is a book from 1917 available through the Yiddish Book Center: Dos ershṭe Yudishe shakh-lehrbukh. Probably not up to date on current theory though

There is plenty of gnashing of teeth about their selection. Close to half the threads on their Yiddish forum are complaining that it isn't YIVO like every other course, but I'm actually really glad someone is covering Poylish dialect.

That book is an awesome find, I'm very excited to read it! I took a look at the title page and it looks like the spelling is much more German-inspired than modern Yiddish. I'm actually really interested in historical chess books. I started reading Philidor's Analyse du Jeu des échecs but I gave up after it jumped straight into a game with pre-algebraic notation.
0 x
Corrections welcomed!

Deinonysus wrote:There is plenty of gnashing of teeth about their selection. Close to half the threads on their Yiddish forum are complaining that it isn't YIVO like every other course, but I'm actually really glad someone is covering Poylish dialect.

That's my idea too: someone who wants to learn Yiddish YIVO-style can pick basically any course out there, while there is close to nothing about dialects. But maybe all this complaining shows these people are actually ready for the Yiddish cultural experience. It kind of reminds me of the joke about the Jew who is stranded upon an island, alone, and ends up building two synagogues. When they come to rescue him, someone asks why he has built two and he answers: "This one is my synagogue. The other is the one I don't go to".
In the same way, maybe some of these people are enjoying treating Duolingo/Hasidic Yiddish as the course/Yiddish they don't go to.

Deinonysus wrote:That book is an awesome find, I'm very excited to read it! I took a look at the title page and it looks like the spelling is much more German-inspired than modern Yiddish.

Yes, Yiddish spelling (and vocab) was often heavily influenced by German, at least up to the 1920s. Depends on the author or topic, of course (the vocab thing, not the spelling).
5 x

I must say, I'm actually so disappointed by Duolingo's lack of typing support for Yiddish that I'm thinking of switching to Russian. It hurts my hands to type in all of the combining diacritic marks that Duolingo wants my to enter, and it's comfortable on my nice ergonomic keyboard but that's too loud for me to type on at night without worrying about waking my daughter up, so I'm stuck with my laptop keyboard which isn't very good at typing special characters. Russian will be much easier to type, once I learn the layout of course, because each letter gets its own key.

Russian would obviously pair much better with my current chess obsession than Yiddish, and it is probably my highest priority language that I have never studied for more than a week at a time. I keep coming back to it but I always seem to fizzle out and get sucked into something else. I guess I'll see how it goes this time. I got three posts into a Russian log at some point so I guess I'll revive it if I follow through with Russian.

I'll keep checking back in on Duolingo's Yiddish course to see if they fix the typing bug, in which case I'd be happy to return to it.
2 x
Corrections welcomed!

You make me want to start all over again. Yiddish is a very interesting language anyway, but combined with chess is great. I make such connections in my head as well about languages

Godd luck with that journey, I'll be following your log! 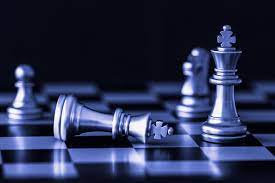 You may like this book, or maybe you already know it.