kennyaa wrote:I will check out Audiomol it looks decent. I have audible but the catalogue isn't as good as it is for English, French and German.

I tend to find that Audible has books when I really go digging, but despite all the books I've listened to in the last year being in European Spanish, it doesn't seem to occur to it to recommend me books in Spanish. It just makes it such a chore finding a book when the whole site is geared towards serving me English content. The books there are aren't that long, and a 1 book per month subscription doesn't cut it for the pace I'm going at.

Anyway as I said, don't expect to enjoy using the Audiomol site, but do expect 80% of it to be Spanish. Also, they have 29 audiobooks that are completely free to stream which might be useful to any readers on a tight budget!
4 x
1,000,000 sentences of Spanish:
Double SC films:
Double SC books:

It has just occurred to me to tot up the number of sentences I've consumed again. I think I'm over halfway with somewhere between 500,000 and 600,000 sentences, or somewhere between 5 million and 6 million words from July 2019. It's an astonishing amount of input, and yet the numbers don't seem that large to me - that just shows how big a million really is.

As readers of my log and its predecessor will know, I have not studied during this time. Not once have I got out a textbook, looked up a grammatical construct, nothing. I have very occasionally looked up words in a dictionary, but that probably amounts to about 10 searches per month so not really significant.

I started this input only exercise with probably a B1 level in understanding. I could follow content for learners such as Hoy Hablamos or Dreaming Spanish pretty well, but I very much struggled with anything for natives. Indeed I tried a young adult book in July and it took me two months to finish it! I remember that I started listening to the radio in Spanish (RTVE) and I could only pick out greetings and the odd word here and there. I pressed on with comprehensible input though, and boy have things changed. I can fly through an adult audiobook like no tomorrow, I can listen to the radio and pretty much understand anything, I have been able to enjoy any TV show I've tried in the last few months, and I have not not understood a Youtube video in donkeys years.

I cannot verify claims that you can use comprehensible input from the start or even A1/A2 and get here, I cannot argue its efficacy against other forms of learning, I cannot even say it's very efficient - I mean have you seen how long this took? What I can look back on and say though is that from a B1 level it is very possible to get to a high level of comprehension (C1 in my case from the CEFR descriptions) just by engaging with comprehensible input in the target language and putting in a decent shift.

I don't really know what's next for my Spanish learning journey. As I've said before I'd like to get a C1 in the SIELE, but I haven't made any steps to get a language exchange partner or a tutor or anything so it doesn't look like that'll happen too soon. I see no reason not to just continue as I am to a million whilst slowly continuing to introduce Catalan. I doubt my level will change significantly between now and a million, there are clear diminishing returns on time spent with input, but at least I'm having fun!
9 x
1,000,000 sentences of Spanish:
Double SC films:
Double SC books:

It's that time of the month when everyone posts monthly updates, so all aboard the bandwagon, I'm in too.

May was of course the first month of the super challenge for which I entered with a double challenge in Romance languages (essentially Spanish and Catalan). I had a pretty good start to the challenge I'd say.

I started the month with the reading part taking an hour per day, but towards the end of the month it was only taking me half that. However, since I'd already made a habit of reading an hour per day, I just kept doing that with the end result that I just read twice as much. I've posted before that I never really liked reading, but I had a good time with it and really started to enjoy it. I began consciously trying to avoid dictionary look-ups on my Kindle whilst reading, but then settled for using a monolingual dictionary (at least in Spanish, I haven't managed to source a good Catalan Kindle dictionary) and just looking up when I lost meaning. That ended up being pretty rare. One thing I did find annoying was that looking up one type of word (eg an adverb) just gave me a definition using the root word. That's a bit pointless because if I knew the root word I wouldn't have needed to look up the adverb. This plus words being so obscure that I didn't know what they were in English meant that about half of the words I looked up I didn't find out the meaning of - what a waste of time.

On the Spanish reading front I finished the ~700 page book I accidentally started (La vieja familia), and have made some headway into a physical book Cuatro días de enero. The latter is available as an audiobook in Catalan, so I'm hoping reading it in Spanish will help me break into Catalan audiobooks somewhere down the line. On the Catalan front I read a chapter of the first Harry Potter every week. It's tough going even though I know the story.

Most of my films part came from audiobooks in which I finally finished the Harry Potter books, and listened to several others. I also watched some Spanish TV, Youtube, and watched a kids show in Catalan every day.

Great month overall, and I'm glad that the start of the super challenge has taught me that I really can enjoy reading. I hope to read just as much going forward 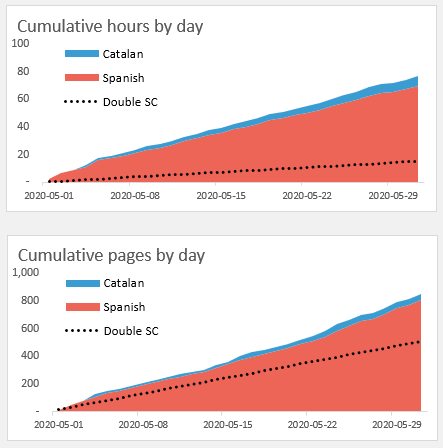 I feel that over the past few months since posting the fire under my language learning has been waning a bit. I was supposed to go to Catalonia this summer but ended up not going for a few reasons. Even if I had have gone it's not as though I even speak Spanish or Catalan anyway, although if I thought I was going to go it might have spurred me on to get some practice beforehand, I don't know. I have rescheduled going to Spain for Q2 2020, although likely to the Basque Country (must not get Basque wanderlust).

It has been a while since I did any sort of language test for Spanish, and at the moment I see very little point in it. Anything I turn my attention to I understand pretty much in its entirety. I seldom wonder what a word or expression means, and almost always when one does turn up that I don't know I can work it out from context. Or at least that was my thinking two months ago...

I set out to widen what I read a bit and decided I was going to read at least one book from every category on Goodreads this year. I was challenged a bit by a book about the Spanish civil war which almost immediately through me in the deep end with a lot of military vocabulary. It definitely got easier after a few (monolingual) dictionary look-ups, and the latter half passed with few unknowns. I'm going to press on with reading through the different categories as I'm sure to be challenged, although having just recently found the forum book club, I'm keen to keep up with that and other readings as well, so busy busy.

I bought a physical copy of The Little Prince in Catalan, and then for good measure bought the English and Spanish as well - it might help the other half. It was a bit challenging but I got through it in the end. I've now started listening to the first Harry Potter book in Catalan as an audiobook rather than reading it which fizzled out a while ago. It was an absolute monster to find a copy of I tell you. That makes my Catalan routine a bit of practice on Duolingo (I finished the tree a while back), 10 mins of a kids TV show, some radio when I get time, and a bit of Harry Potter. It's not much, but it keeps me in the flow.

I think on Spanish sentences I've added around 175k, so around the 750k mark now. I keep saying this, but one of these days I'm actually going to estimate it to the best accuracy possible. I have some of the framework for doing so already set up, I just haven't put it together properly.

Nothing much else to add except that I'm still ahead on the Double Super Challenge - indeed I've almost finished the films part, but my schedule does not allow me to transfer that time to do reading instead. 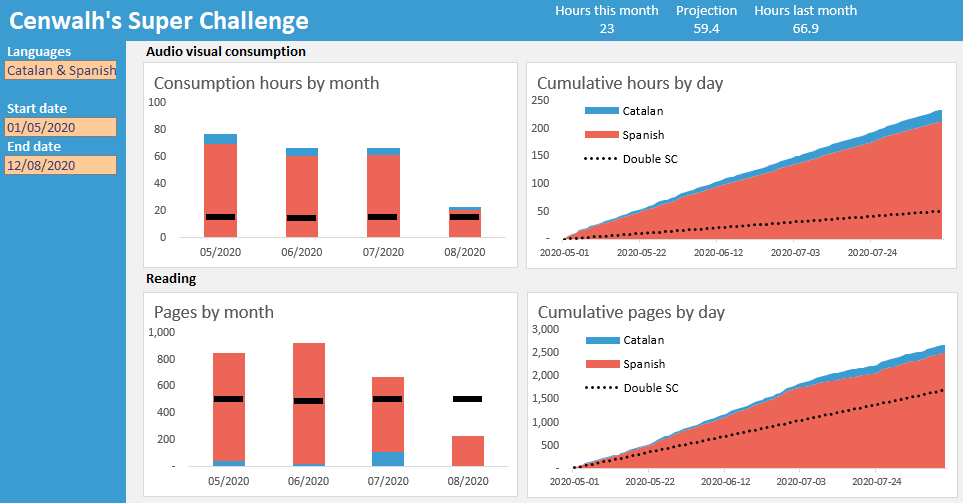 Hi! I'm obsessed with this figure as well- 1 million sentences- like you, this idea from Deka has completely blown my mind.

I've dedicated a lot of time and energy to reaching these milestones and have written a tutorial about how I'm doing it and how to log the data. I'd love for you to read it: https://www.cipolyglot.com/qi-tables-a- ... foreign-la

BTW, I signed up to this forum because I read your messages about 1 million sentences. Glad to have found someone with similar ideas as me. Not sure what happened to Deka though. His videos are truly inspirational.
Anyway, drop me a line at neil@cipolyglot if you read the tutorial.
0 x
Post Reply
25 posts