kraemder wrote:It seems like you're making better progress than I did in my first six months (maybe thanks to WaniKani?). I also really struggled to benefit from immersion and it drove me nuts. Watching Matt vs Japan's videos maybe I just wasn't stubborn enough. He seemed to benefit a lot from immersion really quickly. I didn't until much later. Much later. Anyway, good luck.

Thanks for the encouragement. It's definitely a slow and frustrating process. I do notice that I'm recognizing words more often and more easily, even though I still can't understand very much. (Speaking of recognizing words, a couple days ago, I missed the WK review for 直接 due to completely blanking on 接, much to my frustration. Soon afterwards, I noticed the word come up while listening to Nihongo con Teppei. Such is the Baader–Meinhof phenomenon.)

In other news, I watched the first episode of BNA: Brand New Animal last night. As with Cardcaptor Sakura, I read through the plot summary and subtitle file beforehand so I'd understand it better.

Episode 32 of Cardcaptor Sakura is also notable because Syaoran and Kero switch bodies, but unlike most shows, the voices do _not_ switch over. Instead, Syaoran uses Kero's Osaka dialect, and Kero speaks rudely like Syaoran apparently does. Sadly I'm not skilled enough at Japanese to pick up on such nuances. I didn't even realize that Kero spoke Osaka-ben in the first place.

This morning, I watched CS ep 34. I remembered from the subtitles that there's a scene where Sakura is surprised to see Touya at the competition and he responds "part time job", so I was expecting "アルバイト", but instead, he said what sounded like ばいとだ. I looked it up, and apparently, バイト is a common shortening of アルバイト. It can also mean "byte" of course, because that's not confusing at all.
1 x

I watched ep 35 of Cardcaptor Sakura yesterday. It's interesting to see the cultural differences sometimes. The idea that kids would still be in school two days before Christmas was pretty shocking to me. There's also the thing where Christmas is seen as a romantic holiday in Japan, but I was already aware of that. Still, it was amusing to see Sakura ask Yukito to go to an amusement park for Christmas, since it's so different from how people treat Christmas here. I don't know if there are any amusement parks that are even open on Christmas here.

Anyway, ep 35 is the end of season 1. Apparently there's a movie that takes place between season 1 and 2, but Netflix doesn't have any of the movies (or the sequel series Clear Card for that matter), so I guess I'll just proceed with season 2.

In other news, I finally reached the 党 kanji on WK today, which means that I've now learned all of the 268 most frequent kanji. My kanji frequency chart is looking pretty full now! 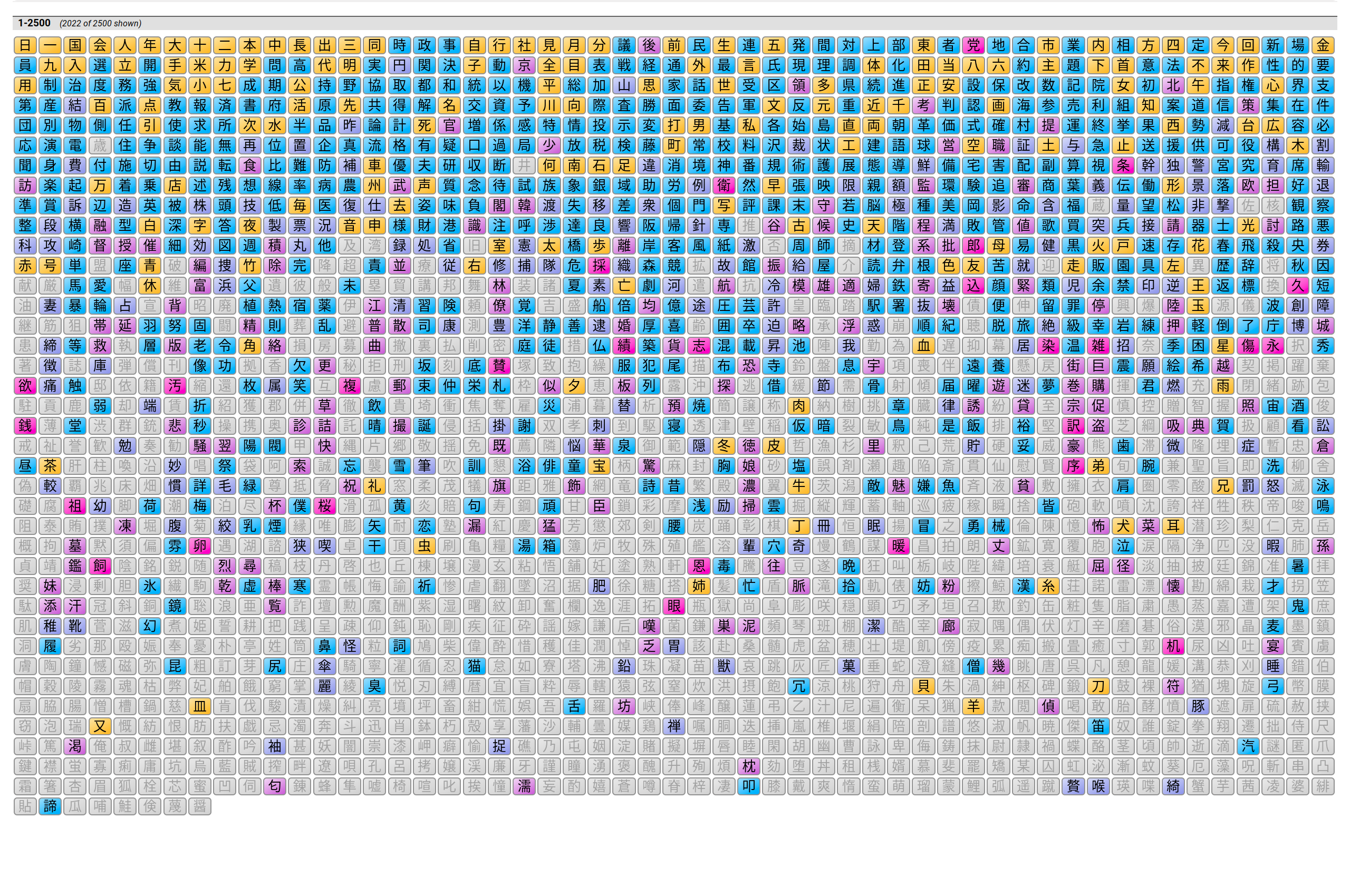 I was pretty pleased when I noticed the word 番組 while listening to Nihongo con Teppei this morning. It immediately stuck out as a word I'd seen on WK, but I had to think about it for a while to remember the meaning. It helped that I knew the episode was about watching Japanese TV, so I realized it must be "tv program". It's currently at Enlightened on WK, but I've struggled with that word in the past (hence why it's more memorable, well that and the seemingly random and impossible to guess meaning), getting it confused with 番号, 交番, 信号、etc. as well as forgetting the reading for 組 at least once. Hopefully seeing it in the wild will make me more likely to remember it when it comes up for the burn review in four months.

Likewise, I also (re)learned 発音. In that case, I wouldn't have been able to remember the meaning in a vacuum, but I immediately figured it out from context, since Teppei had been talking about how "Donald Trump" and "Boris Johnson" become "Donarudu Turumpu" and "Borisu" or whatever when he said "日本語の発音".

I finally started to remember that える always means you're not the one doing the action on WK after going through 絶える, 冷える, 燃える、見える etc, only to get hit with the review for 与える. Luckily, I was pretty sure it was "to give" rather than "to be given" or something in spite of the rule, so I still got it right, but it is a bit frustrating to get hit an the exception immediately after I became proud of myself for getting some of the transitive/intransitive pairs right.

Also this morning, I reached the WK lesson for "teriyaki". The lesson included a warning that it is "quite different" from what you get at teriyaki shops in West. I guess that's good to know if I ever manage to travel to Japan (which seems increasingly unlikely with the way the pandemic is going), though I'd probably end up trying it anyway just to see what it's like.
4 x

Well, on the bright side, I'm not avoiding Japanese right now, which is more than I could say a month ago when I posted the six month update.

Anyway, I've continued pretty much as before - just doing Wanikani and watching anime. Progress is maddeningly slow, but I do think my listening comprehension is improving.

I've barely tried to practice reading and haven't tried to study grammar at all in months. I do think reading is important (if nothing else, it's really frustrating to not understand any of the signs or writing when watching anime), but I haven't been able to find any good way to practice it. And that's doubly true for grammar. Hopefully I will at least pick up the spoken grammar by osmosis if I keep watching anime long enough.

I'm just popping in to thank you, golyplot, and everyone else who's contributed here, because I've picked up a huge number of new-to-me resources in this log to help me resuscitate my ancient and slumbering Japanese. Ironically, I'm now absolutely certain that Wankani would give me a nervous breakdown, as I can't handle high-pressure SRSing that's prone to pileups (I'm looking at you too, Skritter), and meanwhile I adore Lingodeer, which doesn't spark any joy for you at all. But nonetheless I've found all kinds of other new toys here so I wanted to shout out my appreciation to everyone.

As far as Wanikani goes, I missed the burn reviews for the kanji 鳥 and 考 due to being able to remember the kunyomi but not the on'yomi readings required for the kanji reviews. I guess it's one of those things where I only remembered the kanji via words, not the original kanji lessons. So that was a little frustrating. I also missed burning the 校 kanji due to not recognizing it at all, which was quite embarrassing. I'd of course understand it if it showed up inside a word like 学校, but I just blanked on the kanji itself.

It seems like the kanji lessons are often like the caldera of an atoll that has sunk back into the ocean, leaving only the coral of vocabulary built on top of it behind. Although I don't always forget them. For example, I was able to remember 黒 just fine. In that case, the on'yomi reading is commonly used in words, so it wouldn't be that surprising, but I specifically remembered it from the mnemonic of the original kanji lesson.

(I also missed a bunch of other burn reviews, like 氏 and 民, but I don't feel so bad about those since they're less common and much harder to keep straight. It's the ones I *should* have gotten but didn't that are really frustrating.)

While watching Sakura yesterday, I was able to recognize her saying 五年生 a lot and connect it with her being a fifth grader now, so that was kind of cool. I'd never learned that particular word before, but I've learned (and forgotten) similar words on Wanikani like 大学生 in the past.
3 x

As usual, I haven't devoted much time to Japanese lately. But today, I did finish going through all 495 episodes of the intermediate Nihongo con Teppei podcast. (The latest episode is labeled #496, but there are actually 495, since he skipped #86 or so for some reason).

For months, I've been listening to Teppei in the background while eating, cooking, etc. I mostly end up just tuning it out, but I figure it can't hurt, and I do occasionally try to pay attention. From now on, instead of ignoring Nihongo con Teppei while eating, I'll instead be busy ignoring 4989 American Life.


Speaking of which, while listening to Nihongo con Teppei yesterday, I was proud to understand the phrase 心配しないでください, and in particular, the fact that しない is the negative form of する. Conjugations (and by extension, verbs) have always been a source of struggle for me. I tend to just recognize words by the root words with all the conjugation stuff just being indecipherable gibberish to me. So I've been rereading a bit about basic grammar lately, but it's not easy to remember.
2 x

golyplot wrote:For months, I've been listening to Teppei in the background while eating, cooking, etc. I mostly end up just tuning it out, but I figure it can't hurt, and I do occasionally try to pay attention. From now on, instead of ignoring Nihongo con Teppei while eating, I'll instead be busy ignoring 4989 American Life.

I didn't know about 4989 American Life, it seems the episodes all have complete transcriptions as well, that's pretty amazing! I may have to find some time to dedicate to this podcast to see if i can't improve my listening skills. Thanks for sharing it!
0 x
HypLern - Interlinear books

While watching Cardcaptor Sakura yesterday, I noticed that when Sakura asks Li to practice together, she says 一緒に練習しない?, which puzzled me a bit because しない is the _negative_ form of suru - to do. I vaguely recall something about the negative form being used for suggestions back when I was actively trying to study grammar months ago, but I wasn't able to find anything about it from cursory searching.

Incidentally, I also noticed that the play scripts in the episode go left to right, rather than right to left as many Japanese books do. The show has frequently depicted both types of books, and it always makes me wonder why they are that way.
0 x

golyplot wrote:While watching Cardcaptor Sakura yesterday, I noticed that when Sakura asks Li to practice together, she says 一緒に練習しない?,