6 Week Challenge is done. I got enthused, bumped up my time, and did pretty well. At least it seems like I'm making progress.

I already dumped Duolingo again. How do people keep with it? How do you learn a grammar point when they don't even tell you what the point is? I know they've added the Help pages, but too little info is given. Meh.

So I committed to the 366-Day Challenge after already saying the 365 didn't work for me.

At least I signed up for both German and Spanish so the next time I go off on a Spanish-only tangent, I won't feel like I failed the challenge.

Speaking of that, I saw that Memrise has added a Mexican Spanish course--actually 7 courses. Something to consider, but I already peeked in and would have to start at least with Spanish 3.

I just passed the German A1.1 level (which is actually the lowest they had.)

Yesterday I did some Spanish tests--I've passed the A2 before, but failed it this time.

One of my goals for learning German was to participate in various online forums in German--crafting, Facebook, etc.

Today, in one of my Facebook groups (about a US tv show) someone replied to the thread in German. Short sentence, I can understand that, right? I even ran it through Google Translate to make sure I was understanding it correctly.

He answered back, basically saying--that's not what I said. So I translated it wrong and gave the wrong answer.

Getting ready for another 6 Week Challenge. This will be the year that I bump it up to Intermediate. Of course I've been saying that for how long?

I was looking at setting up a study schedule and came across an example on Google Images. I'm going to try to upload it at the bottom. It gives how long it will take based on your daily time spent--I've seen all the charts about how many total hours but this breaks it down to what you're doing today. And realizing how many 30-minute days I've put in. Calling it good because I'm keeping up with the yearly challenge, but not really accomplishing anything. Wake up call, to be sure.

I was reading someone's language blog that was linked off of Pinterest (I hate Pinterest.) She was talking about don't just set up for the year and plod through--be real about it. Set it up like college semesters and make a plan for each semester through the year. Be totally accountable for that one semester--you must finish everything on time, just like in college--when it's over, it's over. Then take your break, or slow down, until the next semester starts, and start up again.

I like that idea. I've been trying to set up what I want to do for the whole year, and frankly, it's a bit overwhelming. So, I'm following the quarter schedule of my alma mater and here's how I'm setting up 2020:

And here's a shot at uploading someone else's schedule with the times: 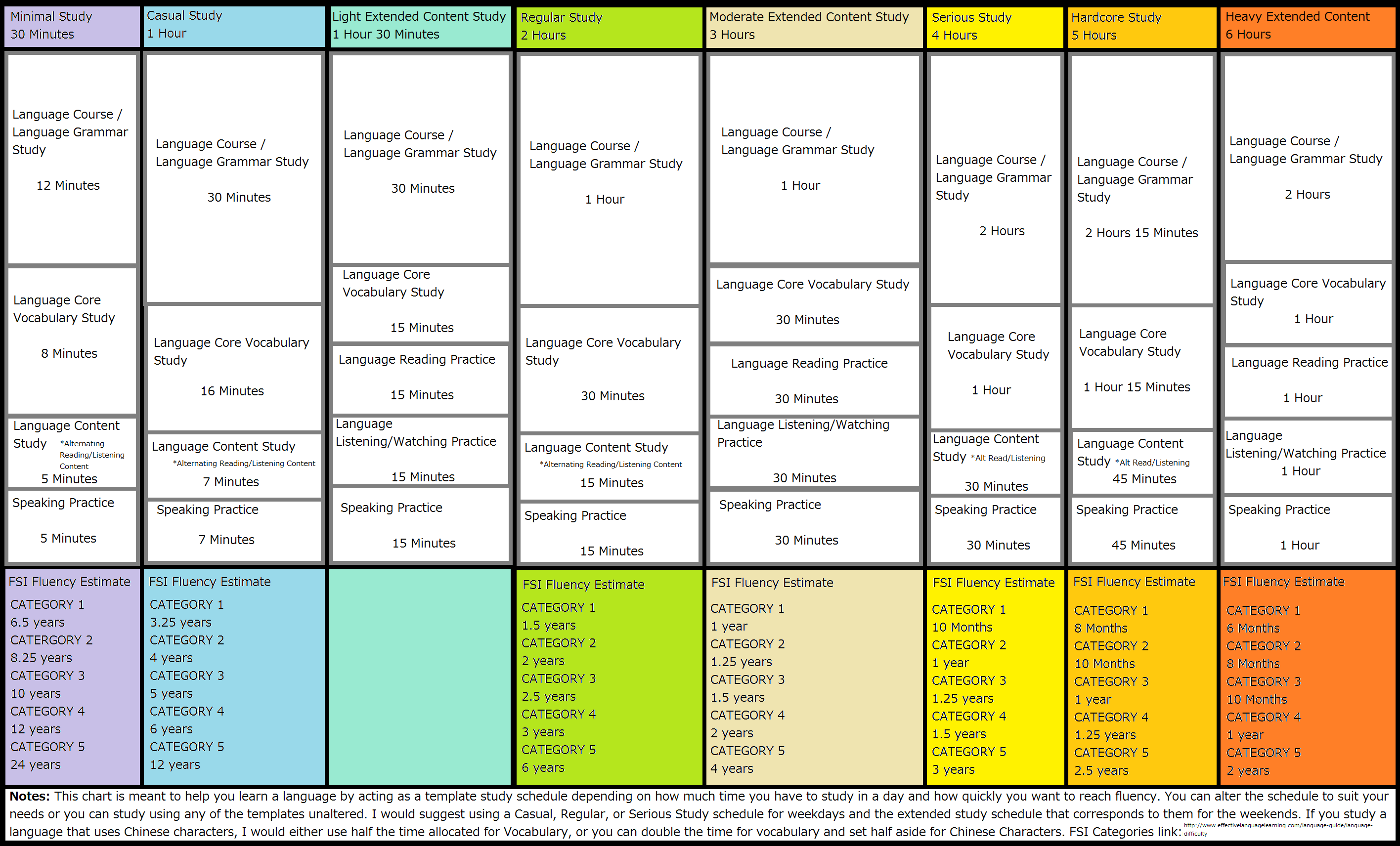 I was looking at Youtube yesterday and saw a video about how to become fluent using Duolingo. What??!? I didn't think it was possible. So of course I watched it. (He had like a 760 day streak, and I didn't get the impression that he did anything else during most of the time.)

He said that Duolingo does a poor job in introducing/explaining grammar. I totally agree. But he said it's all there. Every time you do a sentence, there's that option down on the bottom (Discuss). He said--click on it. Every time you have a sentence question, every time you have the slightest hesitation as to why you're doing something. You'll get explanations from native speakers, people asking the same questions you have, and maybe even more example sentences.

I've clicked on it before--a few times. I've never considered it to be an integral resource for the course. But I can see his point--you'll get immediate reinforcement over and over (every sentence) for that grammar point.

I'm still working on putting together my Winter Quarter schedule. I have 10 books that I'm using--a combination of general textbooks, grammar exercises, verb tense exercises, and two conversation books. I'm planning to do a bit from two a day, then review any/all on the weekend.

For online, I'm doing Memrise, Clozemaster, GermanPod101, Busuu and German Uncovered. Memrise is every day and the rest are 3 or 4 times a week.

Then, I'm hoping in late afternoons to sit down for a combination of reading (at least 15 minutes at a time) and vocabulary--either Goldlist, or going through one of my vocabulary books.

Yesterday was the beginning of the 6 Week Challenge. All study. All day. Learn All The Things.

I did do quite well in that first burst yesterday morning.

Then I spent the rest of the day (until 2 a.m.) pulling up carpets and mopping up 2 inches of water (we're hoping it was water) from the backed-up sewer lines.

Today was a tiny bit of German, then sitting distracted while the plumber (emergency, Super Bowl Sunday priced plumber) cleared the lines and helpfully explained how many thousands of dollars it costs to run new lines when the tree roots have pretty well eaten yours.

We've been having north winds and they've been messing with my internet. I have a ton of other things--textbooks, reading books, vocabulary, etc.--but I'm going to probably lose my streaks on my online sites: Memrise and Clozemaster.

I hate losing my streaks.

I've given up the idea of using 10 books at once. I'm using two--a textbook and a book of grammar exercises. Maybe I'll use a different two next month or something.

Day 5 of the 6 Week Challenge. Going ok I guess--I've stepped up my daily time on a few of the days but not every one.

I did an exercise this morning in the grammar book. It was about possessive pronouns and the dative case. I got every single answer wrong.

Guess I know what I'll be doing for the rest of the morning.

Retrieving my log from the depths of LogLand. Sometimes it takes longer to find it than to update it.

So since my last post in early February--ugly leg injury, restricted to house for 6 weeks, then went right into the lockdown. I kept up my basics--Memrise, vocab cards, a tiny bit of reading, but didn't have the incentive or motivation to do much else. Most stuff is still closed here, so it's still depressing, but I'm trying.

I was moving along on my Memrise courses (I'm doing 7) and realized that I was already forgetting previous words, so their idea of reinforcement was apparently not what I needed. So during March and April I did almost all reviews of every single word, and only learned new words maybe once a week or so, instead of every 2 or 3 days. It did help quite a lot.

It reminded me of a Spanish class I took a long time ago. Amazingly wonderful class, but horrendously expensive--it was I think 5 levels and they guaranteed that you'd be fluent by the end. Unfortunately, also broke. I did a good part of level 1 and just couldn't afford it anymore--but I swear if he offered German, I'd figure out a way to pay for it.

Anyway, he was very strict on the format--you did the lesson, then had to review the lesson 5 times. The vocabulary list you had to go through 9 times. He had boxes to check off when you did each one. But then--when you went to the next lesson, same thing--and then you had to review the last lesson's vocabulary 8 times. Next lesson--new stuff, last lesson 8 times, lesson before that 7 times. And so on.

At the time I thought it seemed a waste of time--I "had" the words. To this day, the vocabulary I learned in that program is still 100% wired in.

Yet when I switched to German, I was doing it like Memrise, several times at first, then what? once a week, once a month? No wonder the words weren't sticking.

I'm envious of those who just "absorb" vocabulary, but obviously I'm a "review it forever" kind of learner.

I took a bunch of level tests this morning, and wanted to note all the results here.

Akademija Oxford: B2. Obviously I can guess well.
Language Level.com A2. Nice, but still some guessing going on.
SprachCafe: 35 out of 70. They were supposed to give me a level, but didn't, so not sure what that means.
Alpadia: A1--85%--Passed A2--40%--Failed I feel most comfortable about this test.
Edit: arealme--vocab of 4784, which matches an 8 year old. Hmm....I'm oddly happy with that. I'll try it again at the end of the year after all the books I'm reading.


So I guess I'm going to continue with my A1 heading towards A2. I can't remember which test it was that gave me the A1.1, but I think I'm maybe an A1.5 now.

I re-read my posts from the beginning of January. Such plans! What I'm actually doing:

Memrise--ton of reviews every day, plus new words, but really pushing 100% recall on every word learned.
Clozemaster--about 10 minutes every day. I think it helps--I'm not sure, but it can't hurt.
Textbook--maybe once or twice a week, reviewing previous chapters and slowly moving forward
Reading--I'm trying for 5 days a week, switching between somewhat easy and somewhat challenging, and doing very well. The bilingual readers are helpful, if boring, but the regular fiction books are very good. I just finished Geräusche im Wald which was so good/scary that I burned my dinner because I couldn't put it down to go check the food. The next one up is Nachts im Museum that looks good.

I saw a book series mentioned--Professor Berkley. It seemed to be a kind of Sherlock Holmes-type book and looked interesting. Of course I couldn't find any for less than outrageous prices--and I wasn't sure what the level was, so, no.

I checked my favorite Better World Books (good selection of common foreign language books, free shipping) and found a book in the series for $4. So while I was shopping I saw a German textbook for hardly anything, and included that.

I got the textbook yesterday (published 2001) and saw that it corresponded to a video series--Fokus Deutsch. What are the odds I could find it?