Lately, I have not been studying much.
I have watched another half of an episode of that drama though, and I also watched this Ted Talk about trash separation.

I started to go to the universities Chinese corner again, has been maybe a 6 week break on Chinese. The reason is that I'm dating this Japanese girl, that is fluent in Chinese because she lived in Sichuan - she loves to talk Chinese to me °_°, if she would know how little I understand

Also my Cantonese roommates moved out, will get 2 new roommates, one from Peru, and one from Korea in April.
0 x

I'm sick and had to cancel all my social plans, but that gave me time to study.

I continued watching the drama 東京独身男子 , finished Episode 2, and also watched 3 and 4. After watching I reread the subtitles on LingQ, and added all unknown vocabulary (around 300 words) to Anki, also studied them there..

I dropped that drama for lack of quality, and after complaining about it to a friend she recommended me this older drama instead, of which I will now watch at least the first 3 episodes.

So I'm still working on my vocabulary.. vacation is coming soon, I think I can motivate myself to try making a breakthrough once more. Also plan to work on Kanji in the vacation, which I have not done for over a year. I will also sign up to the 6WC, but it will mostly be Japanese I guess.

Btw. I don't recommend LingQ for Japanese, the words are all butchered up by introducing spacing, and if you want to annotate your texts and go back to them later - no can do. LingQ literally forces you to delete most of your imports if you don't want to stay in an eternal subscription mode. Their aggressive marketing also annoys me. It's not comfortable, but that literally motivates me to improve reading - so I won't need it in the future anymore.
0 x

I fount FLTR (https://sourceforge.net/projects/fltr/) more useable with Japanese than LingQ or other web-based programs. However, it is Java which a lot of people do not like.
1 x
Joyo Kanji:
Language Study, Drawing, and Gaming on Twitch
Haiku and Other Tweets in Esperanto

Thank you, will check it out

Today I watched the first two episodes of 結婚できない男 , I studied the first afterwards in detail in LingQ, still have to study the second. I must say that I missed quite some information the first time

. I think I finally found a Drama I like. Now doing some homework in Spanish..
2 x

Another week passed, nothing out of the ordinary.

In class I had to give a presentation about German and Japanese politics, and had to read some material, and learn some vocabulary about this. I also had a listening exam, more exams next week. This got me curious, I want to have another shot at reading news regularly soon.

I now watched the first 6 episodes of the drama, I can kind of watch it without rereading it on LingQ, and it is going fine. My degree of perfectionism weakened a bit, for example I stopped looking up medical terms in dialogs with doctors

. My daily Anki recap number has grown to around 600 again, which is slightly tiring.

I joined the Chinese exchange students and listened to them talking about the viral outbreak in Wuhan, I understood so little - it was terrible. Chinese continuing to be on the decline, spoke some Portuguese too, was also pretty bad

- will have to do some maintaining soon.
1 x

alaart wrote:Continuing my proposed habit of watching some Japanese netflix everyday, I watched the first episode of this Drama 東京独身男子 (Single men of Tokyo) - that honestly, I didn't enjoy very much, Japanese Drama are so weird. I still decided to stick with it and watch at least 3 episodes. The difficulty was there, and it took my quite some time to get through the episode.

If anyone has a better recommendation, I'm all ears.

Not sure if you'll like it, but I did like this drama: 僕だけがいない街 . It is based on a manga.
Do you like anime series or animated movies? This year they'll be adding some Studio Ghibli animated movies.
ピアノの森 is the anime adaptation of a seinen manga I liked a lot.
Don't know if you already watched it, but I really enjoyed this animated movie: 君の名は
Another drama I enjoyed was モブサイコ100, but it's very shounen-manga/anime like, so not sure if you'll like it.
I haven't watched it yet, but I've heard good reviews about this drama: 宇宙を駆けるよだか

There also seem to be a lot of japanese-dubbed content on Netflix.
0 x

AndyMeg wrote:Not sure if you'll like it, but I did like this drama: 僕だけがいない街 . It is based on a manga.
Do you like anime series or animated movies? This year they'll be adding some Studio Ghibli animated movies.
ピアノの森 is the anime adaptation of a seinen manga I liked a lot.
Don't know if you already watched it, but I really enjoyed this animated movie: 君の名は
Another drama I enjoyed was モブサイコ100, but it's very shounen-manga/anime like, so not sure if you'll like it.
I haven't watched it yet, but I've heard good reviews about this drama: 宇宙を駆けるよだか

There also seem to be a lot of japanese-dubbed content on Netflix.

- yes it was decent. I'm usually not watching a lot of Anime, don't know much Ghibli either, might give it a go. I only know Princessin Mononoke and Howls Moving Castle. I know 君の名は as well, will check out the rest, thanks.

Yesterday we had to do the J-Cat Test in University, not too happy with it, a mere 15 points gain since last time, here is the result: 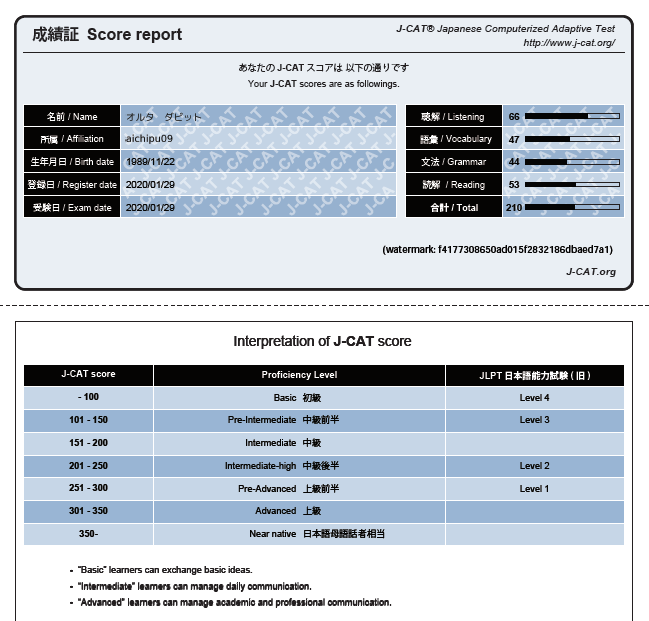 With the 6WC coming up, I want to try and write more regular updates for the next couple weeks. I signed up for Chinese, but probably will keep learning Japanese mostly, I feel I'm making progress lately, want to keep the momentum.

Today I had my final Spanish exam, and with that I finished the A1 course. I learned 1000+ cards of Anki today.. stupid vocabulary keeps exploding. I watched another Episode of 結婚できない男, 3 more left. I still have to pause a lot to get the full meaning while going through the episode. Even if I do a lot of Anki, I input more words than I can study °_°. Vacation is coming up, and the 2 hours + I'm commuting everyday, and dedicating to Anki, will go away. Not sure if I have the willpower to do it in my free time, or if I try studying another way, will see.

Also I studied some German grammar I'll have to explain tomorrow in my teaching Job.. that German grammar, took me 2 hours to understand something in my own language.
2 x

Had a lot of pain today, hard to concentrate. Still I did around 2 hours of Anki, I did a presentation about fair trade - my last homework for this semester in Japanese. And I did my part time Job, there I explained German grammar - in German and Japanese, and we did translation too.

Caught up on your log yesterday, really enjoying reading about your experiences as an exchange student. (Remembering my own experience in Germany 20 years ago!) I can definitely relate to the feeling of having the same 4 minutes of conversation 20 times at a party, because you just don’t have the language skills to get to the elusive 5th minute of the conversation... I didn’t leave Germany with anywhere near perfect German, but I did have something really valuable, a deeper understanding of being a linguistic outsider, what it feels like to almost follow the conversation, to not quite get the joke... And this understanding is so useful when communicating with so many people for the rest of your life back in your “real world.” Looking forward to reading about the rest of your year in Japan!
1 x
Post Reply
139 posts