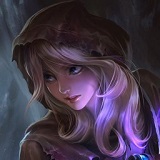 Iversen wrote:OK, how would a Romanian cook then call a circular piece of ground porc fried on a pan? Well, probably something in French, but let's cut out the professionals (and save a lot of money). What about a good oldfashioned Romanian gospodină? I found something called "pârjoală" on the internet, but when I looked it up in the Romanian Wikipedia the article showed - hahahahaha - a picture of Danish "frikadeller" (singular form: frikadelle). The point is that "pârjoală" contains eggs, and the Danish 'frikadelle' does too. Actually my mother's 'frikadelle-fars' contains 400 grams of finely ground pork (or poultry) meat, one ground onion, a couple of spoonfuls of flour, one egg plus pepper and a pinch of salt (sometimes also other condiments), and each 'delle' is oval and around 4-5 cm long. Wikipedia claims that we have got the word through German from Italian "frittatella", and if that's true then the word isn't related to "fricassee", which is some kind of stew containing pieces of meat.

Cotlet_Schabowy cu oiure (wikipedia ro).jpg
By the way, in Danish we also use the word "frikadelle" about pompous histrionic actors, whereas a "bøf" is a male person who does the irons and get totally oversized muscles. But neither is meant for human consumption. And 'deller' (in the plural) refer to the fat deposits that occur around the waist of slightly overweight people.

So in essence I still don't know what I should have ordered if I had reached the city centre in my dream. The Romanians (and Moldovans) do eat fried ground pork, but then they apparently mix it with other ingredients and form it into cylindrical 'mici' (similar to the Slavic Ćevapi) or small meatballs with lots of condiment.

Cutlet (derived from French côtelette, côte, "rib"[1]) refers to:
• a thin slice of meat from the leg or ribs of veal, pork, chicken, or mutton
• a dish made of such slice, often breaded (also known in various languages as a cotoletta, Kotelett, kotlet or kotleta)
• a croquette or cutlet-shaped patty made of ground meat
• a kind of fish cut where the fish is sliced perpendicular to the spine, rather than parallel (as with fillets); often synonymous with steak
• a prawn or shrimp with its head and outer shell removed, leaving only the flesh and tail
• a mash of vegetables (usually potatoes) fried with bread

.. as if that didn't add to the confusion! 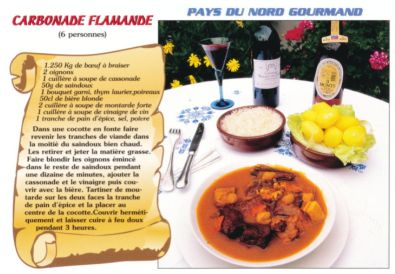 Wikipedia definitely doesn't help in solving this. The more I read, the more confused I am.

Since the last message above I have spent a lot of time on music, but more about that later. Until I got 'distracted' I did my usual text studies and wordlists, but I also read some internet stuff about paleontology - and sorry dear Anglophones, we'll soon have to switch languages. At first I dropped the word "Elasmotherium" into Google and found (as expected) a lot about this majestic critter in English. But I already know English so instead I chose to study a text at the Spanish site prehistorico.fandom.com ...

EN: But then something happened that diverted my attention for a couple of days. Some time ago I got a call from a German lady who spoke excellent Danish. She told me about a friend of hers who played chamber music with two other ladies. However they played clarinet, viola and cello, and there is not much original music written for that combination, so they had through endless searches found my 'Little trio op. 37' on IMSLP and played it, and it seems that they had liked it. 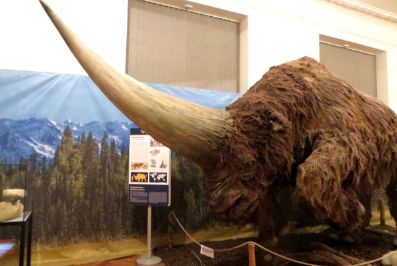 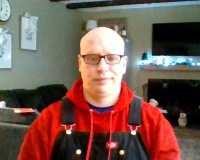 EN: Since yesterday I have added one short 'Epilog' to my Trio for people in Rostock, and now it feels complete. So I don't think I'll be tempted to write more music in the near future. Gott sei Dank.. 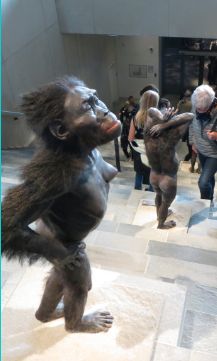 A decent circadian rhythm ought to be fixated around 24 hours. Mine isn't, so I had little by little pushed my goodnight time to 4 or 5 o'clock in the morning. Yesterday I decided to revert to more sensible hours and went to bed around midnight, and of course I couldn't fall asleep immediately so instead I got through about half of my good old Teach Yourself Old English from 1964 (7. impression from 78). And contrary to expectation I did actually have fun reading it. For instance I saw on page 53 that the verb "hattar" ('to be called' in Modern English) was the one and only surviving one-word passive verb in Anglosaxon. Ha ha, I know that word - it is "at hedde" in Danish - but I didn't know that it goes all the way back to a synthetic passive in Proto-Germanic or even before that. And "hattan" is not the only word that has become extinct in modern English, but still is alive and kicking in other Germanic languages.

On page 32-33 I noticed that in the analytic past tense forms (i.e. a form of "habban" or "bean" plus a past participle) the participle can be in either the Nominative or the Accusative, which typically has an added -e. I can't see the reason for that with "bean" (modern "to be"), but it makes sense with "habban "(modern "to have") - the construction with "to have" must have originated from a construction with some kind of an object predicative (or complement) : " I have seen the light" ---> I have + (light - 'seen'), but experts in Protoindoeuropean may know more about this topic. Anyway, it is an interesting quirk. And also that there is such a thing as an inflected infinitive, but not as in Portuguese. On page 55 and 56 there is a list of its typical uses (to express purpose, to 'complement the sens of a verb', whatever that is, and to 'define a adjective'), but I can't see a pattern here.

My main grievance with the book is that the texts in at least the first half of the book all are religious - either direct quotes from the bible or tales about bishops and saints. Yesterday I saw Stephen Fry in the quiz QI lament that no swear words are known from Anglosaxon, simply because the only people who could write were too religious to use such words. Damned - we lack a whole dimension of the language!

When you construct morphological schemes then you are of course allowed to make them from a historical perspective, but then the explanations must follow at the same page - and it is still not the way a learner should think about the different forms in the first place. In any language which you study with the purpose of becoming an active speaker/writer the main thing must be to show how the system functions in its must succinct and logical form at the synchronic level. The excuse must be that no reader of this book is supposed ever to become an active user of Anglosaxon (and in my case that's a correct assumption), and then there is room for historical studies instead.

Apart from that, there are strong declensions and 'minor' (rather than 'weak') declensions. And among these last ones you find some 'monosyllabic' nouns whose declensions are based on vowel changes. One of the nouns quoted is by the way "hnutu" (nut), which to my eyes looks distinctly bisyllabic, but that's a minor issue. I'm more worried that the strong verbs are those which depend on vowel changes (p.52ff) whereas the weak ones use endings ... so why use the exact opposite system for nouns ?? And now we are at it, at page 199ff there are some tables for 'strong' adjectives. But here there is a general problem with the terminology: verbs and nouns can be either strong or weak, but not both at the same time. However adjectives are inflected strongly AND weakly, depending on the context - and not only in Old English, but in all Germanic languages I know of. It is sad that the words "strong" and "weak" have come to be used like this about adjectives, but I can't blame the author mr. Blakeley for that - he just continues in the footsteps of a long and dubious tradition.

All in all I'm happy that he at least put enough data on the table to make it possible to imagine other setups than those preferred by himself. Most modern textbooks aren't as systematic (and generous)... 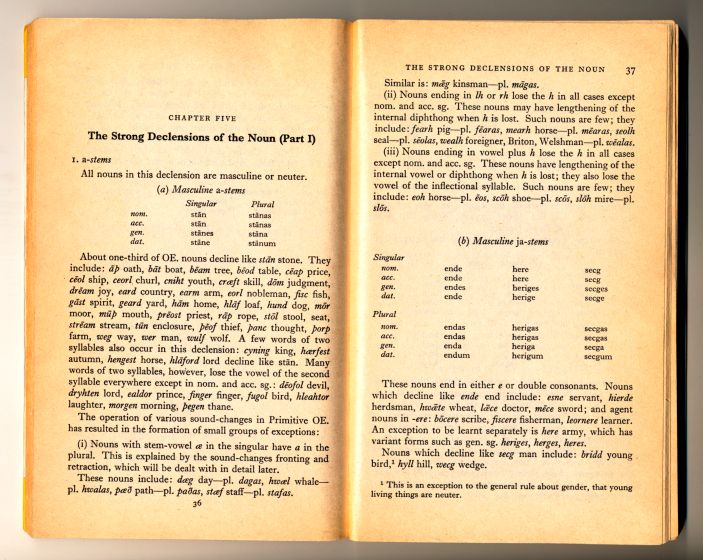 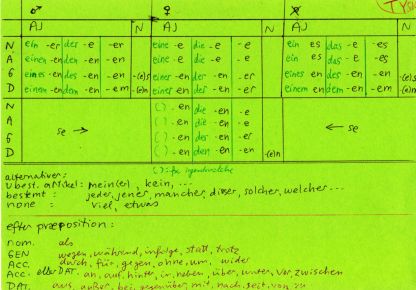 Yesterday I spent some time in the afternoon studying the handling of beef in Polish, using the textset I made a week or so ago while studying spam and pizzology.

EN: By the way, did you know that bird brains with a certain weight are more efficient than mammalian brains with the same weight? They may not have a layered cortex, but the density of neurons in their brains is up to four times that of a mammalian brain. And therefore a mere crow can be just as smart as a chimp in spite of being much smaller. And then I think of the raptors (Dromaeosauridae) that lived during the later part of the Cretaceaous, with lengths of up to 6 m - as the Utahraptor that out of the blue popped up on myTV screen yesterday. Luckily for us the biggest birds today are all fairly stupid - otherwise we would have a problem.

By the way, I sometimes wonder when we'll see whole virtual museums on the internet instead of those that are closed now because of corona. I know that some museums have made lots of internet materials and sometimes even virtual walks to remind people of their existence, but I'm thinking more in terms of complete 3D worlds which you can visit with a suitable gadget on your head. And then you could experience a meeting with a realistic raptor or T Rex without being transformed into a half-raw steak on a Polish homepage. The kids in the future may not care a bit about extinction - they can visit fictive worlds with all the rhinos and tigers and mammoths and raptors and Anomalochares you might wish for on the next generation of the internet, and why then care about the real world? 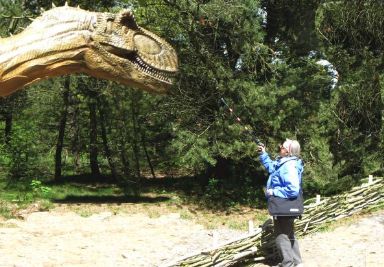 Not much to report this time .. I have been on a family visit, and as usual that means less to no studying. I did bring along a Polish grammar for goodnight reading, but for some reason didn't need it to fall asleep. In the train back home I did read in an issue of the outdoor travel magazine Weg, so now I know some byways of Lesotho and the South African region that borders the Western Drakensberg, where I actually have been twice, but due to the pandemy it doesn't seem like I'll get back there again soon. I also read about a lady who have more or less been living with the Himba in NW Namibia for more than twenty years, but I'm not going to follow into her footsteps.

EN: After I got home I have mostly been doing wordlists based on the texts I have worked with the last week or so. Unfortunately it is hard to write anything entertaining about wordlists. However I did supplement the Russian wordlists with a new text about the Wrangel Island, which was one of the... no, let's take that in Russian: 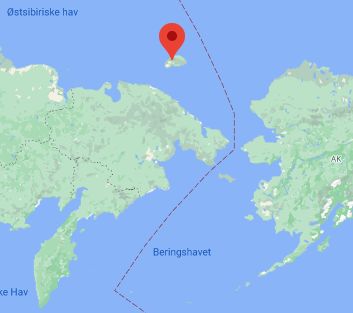 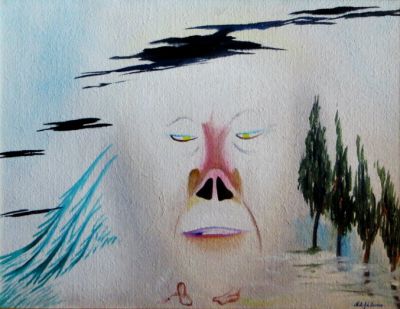 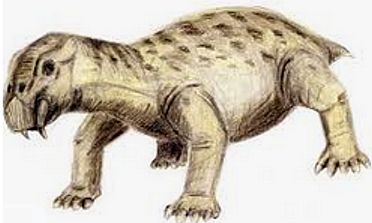