I had been without a laptop for a few weeks after my old one died, but I now have a new one which is working mostly as I want, after the application of some robust Anglo-Saxon invective.

I have been playing with Anki, & after a bit of RTFMing I really like it & it appeals to my programming insticts (I do the odd bit of coding with my work hat on). Also, it seems to have much better repetition algorithm than Memrise - or rather, than the free version on Memrise, as the most useful "Difficult Words" section is only availble on the paid version. So I seem to have been doing more learning about Anki than language learning this week, but I think it's a worthwhile investment of time.

I have been doing some exercises from "Édito B1" & reading a bit of "L'Ombre du Vent" for the April book club. I can't say the latter is really grabbing me - I have an English copy too, so I might cheat and read ahead a few chapters and see if I can get into it & then switch back to the French.

I also got "Édito B2" & "L'Élegance du Hérrison" in the post this week, but they have gone on my "to read" pile for the time being.

And I registered on "Conversation Exchange", but only looking for people to write to for now, & I have a couple of partners, one in France and one in Algeria, which is quite exciting.

badger wrote:
And I registered on "Conversation Exchange", but only looking for people to write to for now, & I have a couple of partners, one in France and one in Algeria, which is quite exciting.

I've been thinking of joining that, so I'll be interested to hear how it works out for you.

I'm still persevering with "L'ombre du vent" and am 160-odd pages in (of 650) although I'm not really enjoying it. I'll gve it another week & if it still hasn't grabbed me by then, then I will feel less of a quitter if I quit.

I've been continuing to listen to JeFF & I seem to have my ear a bit more tuned in to it now & can generally follow most of what's going on. I finally figured out that if I don't immediately understand a word & have to think about trying to remember it, then just to leave it & keep listening or else I will have missed the next two sentences. I also need to make a conscious effort to concentrate & not let my attantion wander, because I have zero hope of understanding anything by only half-listening.

my "Conversation Exchange" experiment is proving to be a bit frustrating. my partners seem more interested in trying to get me onto WhatsApp to practice speaking - which doesn't interest me for now - than writing & don't seem keen on trying out their English on me either, so I'm not sure what's going on there. maybe I just need to try to find some more partners who do want to write rather than speak.

I have given up on reading "L'Ombre du Vent" for the book club. it's a shame as it's at about the right level for me, but I just wasn't enjoying it.

I have set my laptop to French - having made sure I know how to change it back to English if I really need to - which is all good immersion. I work in the tech sector so it'll be useful to learn some more computer-related vocab. At work we have an internal social media system, somewhat similar to Facebook, & there's lots of content from the French-speaking staff which I seem to be able to read quite easily, & again a good way to pick up work-related vocab.

I have a few more email-penpals from Conversation Exchange and that seems to be going okay. I'm definitely improving my written production - I'm making lots of mistakes in doing so, but that's all part of the process I suppose, everyone on the site should be there to learn.

Does anyone have any good YouTube examples of the required level for B1/B2 oral exams? I'm never sure whether they're really representative of what's needed. for instance, the level in this one (from about 3:12) seems higher than B1 to me:

the first comment by user 'tqrth' made me laugh & sums up my response too.

I'm still plugging away at Anki & JeFF, & my listening is definitely improving, although I might just be more tuned in to the JeFF vocab now. I got a freebie month of Audible & have been trying some Pimsleur, which I'm a bit meh about. it's okay, but I'm not sure I'd pay for it & I would have no hope of learning anything if that was my only resource - I have absolutely zero memory for anything I haven't seen written down. I'm also sick of hearing about "our eldest daughter, who lives in Paris and is going to hire a car".

And I got a new passport this week, as my old one ran out over a year ago, so I might get to go somewhere French-speaking soon, which might be handy, depending what happens with le Brexit.

I was quite busy during the week so didn't get much study done, but have been able to catch up a bit over the long weekend.

FSI:
Pimsleur wasn't really grabbing me so I decided to give FSI a go. I quite like the history of it and its slightly wonkily-typewitten course material.

It's obviously pretty dry in content, but there's lots of grammar which is what I need and, to be honest, I quite like it too.

Converation Exchange - writing only:
I've been spending quite a lot of time and effort on this the last few weeks. having not really done any French oral or written production for 30+ years it has been hard work, but I am gradually converting some of my passive vocab & grammar into active. I have four partners who are seemingly quite committed to learning - two French, one Canadian and one Algerian - & I have swiped whichever direction is the non-good way on 3-4 not-so-good partners.

I could probably make life easier for myself by writing simpler stuff, but I'd like to push myself a bit & at least *try* to be a bit interesting. I'm finding it really, really useful to be able to try out things I'm not quite sure about on native-speakers & get corrections back.

Reading:
since ditching 'L'Ombre du Vent' last week I have read nearly a quarter of 'Traité du Zen et de l'Entretien des Motorcyclettes' this week. it's a book I know really well in English, which makes it rather easier, but I'm still on the bit that's mostly about Motorcycles, so there's scope for it to get trickier when it gets on to Zen.

Listening:
still doing JeFF most days. sometiems I just listen once, sometimes listen once without the transcript, then a second time with, sometimes I spent some more time & put new words into Anki. it depends on time & what I feel like really.

Anki
still plugging away at my vocab & verb conjugation decks whenever I have a spare few minutes.
3 x

much the same this week as last really.

"tu" seems rather conspicuous by its absence in verb conjugation. maybe they're just saving the tu/vous thing for later. I'll stick this in here because the Jacques Chirac bit always amuses me: 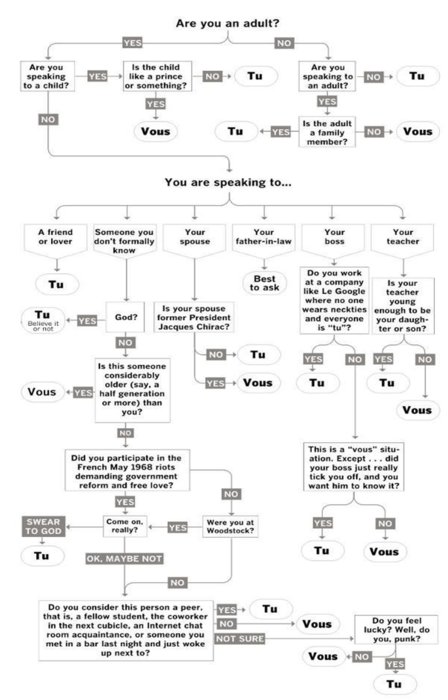 hmm, that doesn't seem to be working for some reason, so here's the URL:

* Converation Exchange (writing only):
still spending quite a lot of time on this, but I'm gradually building up a mental cache of phrases and sentence structures, & production is becoming a bit more fluid. it turns out that three of my four exchange partners are teachers & they seem only to happy to correct my work.

since I started doing this a few weeks ago it's felt like I hadn't been keeping up with my reading & book-learning. however, it finally clicked the other day that I'm doing just as much study - if not more - but it's just that it's now (belatedly) swung towards production rather than the passive skills that I've spent so long on. I think I need a little longer to build up my active vocab & sentence structure cache before I dip my toe into speaking though. I have been doing the FSI linguistic drills out loud (not on the train) & realizing that knowing how things sounds is definitely not the same as being able to pronounce them myself.

* Listening:
a bit of JeFF, plus the FSI listening. I'm also getting quite tuned-in to the French staff at work - no hot gossip yet though.

I haven't watched any French films for a while - I might have another watch of "Alceste à Bicyclette" or "Monsieur Lazhar" this weekend.
2 x

* FSI:
a couple more modules of this. the content may be pretty basic, but I'm still picking up the odd bit of grammar that I sort-of know by feel rather than ever having been taught it or seen it written down, so that's useful. the verbal drills are helpful too, both for pronounciation & for laying down some neural pathways to make my production a lot more automatic.

* Reading:
some more of 'Traité du Zen et de L'Entretien des Motorcyclettes'. I must really stop buying books while I have a stack still to read, but I bought 'Les Royaumes du Nord' aka 'Northern Lights' by Phillip Pullman, which I love & is probably a good level for me.

* Converation Exchange (writing only):
all my partners seem to be on holiday - is it school holidays in France at the moment? so I haven't done too much writing this last week.

* Listening/Watching:
I watched 'Un coeur en hiver' with English subs as I couldn't find any French ones. the film didn't really grab me, but I was able to hear where the subs were wrong, which was quite a lot.

I should probably have watched it without subs, but it was Sunday night & I wasn't really in the mood for two hours of concentrating.

badger wrote:* FSI:a couple more modules of this. the content may be pretty basic, but I'm still picking up the odd bit of grammar that I sort-of know by feel rather than ever having been taught it or seen it written down, so that's useful. the verbal drills are helpful too, both for pronounciation & for laying down some neural pathways to make my production a lot more automatic.

What level are you on in FSI? You're doing French Basic, right? I saw on page 1 of your log that you have a progress bar, but it's out of 72 for each volume, so I'm not sure what you're counting there.