So, up until the mid 20th century, Polish "ł" was pronounced like the Russian hard letter "л" (one must touch the upper teeth with the tip of the tongue). However, during the last few decades, this pronunciation was completely replaced by the new one - "ł" is now pronounced like "w" in English word "way" (it's more of a vowel than a real consonant). The old/Russian "ł" is called "ł sceniczne" ("theater ł") because it was required for actors/tv presenters to pronounce "ł" in this old way but nowadays I don't hear it anymore, not even on TV. People are maybe ashamed to use the "ł sceniczne" (or Russian hard "л") in everyday speech, it's perceived as some kind of regional, eastern variant and not the common norm.

Thank you, that's also very interesting. I knew about the Polish ł, but I did not know it replaced the Russian hard л. Now, thinking about it, it makes perfect sense. The city of Białystok (the radio link you sent) means "white slope", in Russian Белосток. The Russian белый is equivalent to the Polish biały.
2 x

Hebrew - Assimil lesson 29. It took me 3 days to do the 4th revision lesson but there was a lot of information to absorb. Other than that, I tried to read an online article from news.walia.co.il - I just wanted to test my capability of recognizing Hebrew letters because I cannot truly read anything at this point. I admit that when I see a text in Hebrew, all I can see at the first glance are some "symbols" and it takes my brain a few moments to start processing what my eyes can see and I recognize slowly the letters. Of course, I still insert the vowels randomly in my inner voice but I recognized some words here and there (for example כברand גם...וגם) so the progress is (very slowly) happening.

Russian - Assimil lesson 43. The same thing here, I (re)started reading online articles from BBC Russian Service but I can understand quite a lot thanks to similarities between Polish and Russian. I also pay attention to mobile stress and try to guess when "o" is actually read as "a".

French - read pages 68-72 from Le Point. I watched 1 video by DocSeven (about radioactivity) but I think I watched enough YT videos in my life and am feeling fed up with them, so I listened also to RadioFranceInfo instead for some 2 hours in total while working

Romanian - read 1 article from DeutscheWelle in Romanian, watched 1 Telejurnal and 2 episodes of "Romania te iubesc" and listened to 1 "Agenda globala". I stopped listening to the podcast "Istoria Romaniei" around the episode 33 - the multitude of names and events became overwhelming and I was not able to follow seamlessly the events described. Anyway, I'm interested in the early history of Romania only and the events past 1500 AD are not what interests me the most.

All in all, it's been a lazy week, I did not do as much as I expected but that's ok, we all need some kind of a break from time to time. I did more listening in German than in Romanian so I'm happy that the trend has been reversed. I will probably do some overtime in the next weeks and it's quite discouraging but I'll do my best to keep it up with language learning.

I also used up Christmas bonus from my company and ordered some books - I could even call it a shopping haul! So I bought "Krizom Krazom" series of course books for Slovak language (even though I will not start this language any time soon!) and "Assimil Le serbo-croate sans peine" printed in 1972, I'm still waiting for "Assimil Tschechisch ohne Muhe" (printed in 2004) and "Familia Romana - Lingua Latina per se illustrata" to be delivered but Amazon takes its time.
6 x

I remember staring at Hebrew pages and then recognizing the only word מיג-15 (Mig-15, a Soviet airplane). I considered it a victory back then

The road ahead is long and complicated, but the most important is that you have started the trip!
2 x
Please feel free to correct me in any language

Ever since I listened to the Deutschland Funk Nova podcast episode about Bertha von Suttner (she spent a few years in Tbilisi and learned the language to the point that she was able to translate from Georgian into German - but sadly it was not the main focus of this episode), I've been searching for information about the Georgian language. According to one opinion, the Georgian verb system is even more complicated than the Hebrew one - doesn't bode well for my Hebrew learning! These languages are of course not related but it seems their conjugations are on a similar level of difficulty. On the other hand, once I've learned Hebrew conjugations, Georgian verbs will be a piece of cake

But at the same time, there are some stories of people who managed to learn Georgian, so it seems doable though the effort needed is probably bigger than in case of other languages. It all depends clearly on the languages we already know and the commitment. There are other languages I'd like to learn before toying with the idea of tackling Georgian but maybe one day, who knows... It's a country I've always wanted to go to anyway and I just love the sound of the language. And it has only 5 vowels - I always struggle to pronounce correctly all these long/short vowels out there (that's why I'll probably never learn Hungarian), so that looks almost like a blessing (though Georgian compensates it with multiple ejective consonants).

And here's a nice YT channel for those who want to learn some basics:

And this Funk Nova episode about Bertha von Suttner:

Hebrew - Assimil lesson 32. I will need to check how the preposition "et" אֶת is used in Hebrew. It's supposed to introduce a direct object in a sentence but it seems it's not used after each verb that presumably requires a direct object. Or even in some sentences it's there but in other sentences it's not there, even though these sentences are built around the same verb! for example the verb "to see" לִרְאוֹת

Russian - Assimil lesson 48. I started reading "Petersburg. Miasto snu" by Joanna Czeczott. It's in Polish but I think I can mention it here because it's a non-fiction book about Saint Petersburg, its history and inhabitants. The first chapter was about the Finno-Ugric nations that had lived in the area before the Swedes and Russians took it over. So the land was home to the smallest of the Finno-Ugric nations, namely Votes, and the author describes the fight they are leading right now to preserve their culture and language.

English - I read p.65 from Time and I watched only one YT video (by Lindie Botes) but I finished reading "White Teeth" by Zadie Smith. Hmm, it was not the most pleasurable reads of my life. I considered putting it away in the middle but still managed somehow to read it till the end. Honestly, I'm not sure if it was worth my time and maybe next time, if a book is not to my liking after 100 pages or 20% of the volume, I should simply give up? There are so many books to be read and spending my time on "ok-ish" books may be too much of a sacrifice. On the other hand, I don't like to leave things unfinished/undone, but I think I'll need to adapt and be more flexible.

And here is a pic of my new arrivals I talked about last time, all the books have finally been delivered this week (sorry for the low resolution): 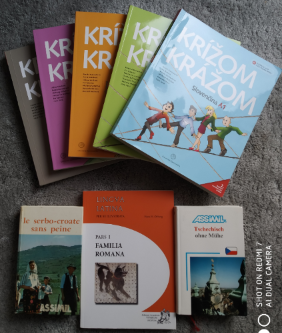 AroAro wrote:Hebrew - Assimil lesson 32. I will need to check how the preposition "et" אֶת is used in Hebrew. It's supposed to introduce a direct object in a sentence but it seems it's not used after each verb that presumably requires a direct object. Or even in some sentences it's there but in other sentences it's not there, even though these sentences are built around the same verb! for example the verb "to see" לִרְאוֹת

You only use את before a definite direct object, that may be your point of confusion.

(Proper nouns are considered to be definite even if they don't start with the definite article ה).
2 x
Corrections welcomed!

AroAro wrote:Hebrew - Assimil lesson 32. I will need to check how the preposition "et" אֶת is used in Hebrew. It's supposed to introduce a direct object in a sentence but it seems it's not used after each verb that presumably requires a direct object. Or even in some sentences it's there but in other sentences it's not there, even though these sentences are built around the same verb! for example the verb "to see" לִרְאוֹת

You only use את before a definite direct object, that may be your point of confusion.

(Proper nouns are considered to be definite even if they don't start with the definite article ה).

Thank you for the explanation, it now makes sense.

This preposition was introduced in the lesson 17 with the comment "et est une particule qui précède le complément d'objet direct (COD) déterminé". I must have missed the word "déterminé", and besides there were no additional examples with the preposition, so that didn't help either.
2 x