Do you know of any Classic Children's French Books?

She may wish to give this a try:
https://www.youtube.com/watch?v=L7l7-sKdxmE

Sent you a PM when I hadn't found the thread.
1 x

I've finally had a moment to take a look, it looks quite good/interesting. And there's a movie too which gets quite a few good reviews. I've added the book to my list!

PeterMollenburg wrote:I shall take a look when I get a chance, thank you, guyome!

You're welcome! I hope you'll find something that your daughter enjoys.

Couldn't figure out anyway to copy this post into both places. So just pasting the link: 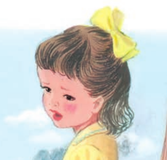 rdearman wrote:Couldn't figure out anyway to copy this post into both places. So just pasting the link:

I'm just going to copy it and delete the above post. Thanks.

I thought I'd share for those who aren't fully aware of them... 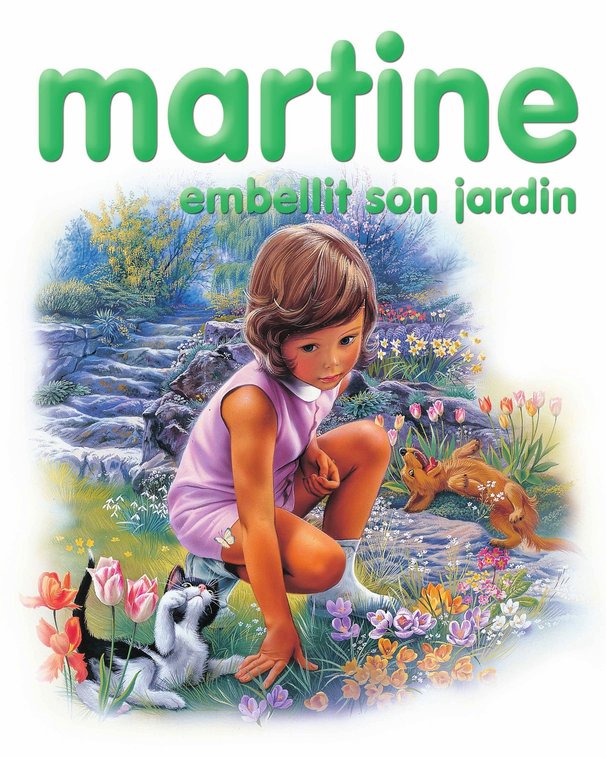 These books are made for children ages 4-8. The stories generally deal with real life circumstances and use common words. Martine, of course, is the heroine. Each book is about 19-24 pages long and has about 40-80 words per page. There are at least 60 different books. And the books are super cute—they are just a little bigger than the size of one's hand (the last video posted below might give a decent indication of size).

But it's not just the text that makes these books great; the pictures in these books are amazing. The illustrator is Marcel Marlier, a famous French artist. Each picture is very detailed and tells a story all by itself. These books were a big hit in France and are still in print today, though I prefer the older versions of these books.

I've already bought 14 of these books in hardcover edition on ebay (which are being sent from Montréal, Québec) and I have several different PDF books from the series on my phone, many of which I added complete English translations to using Adobe's 'note' feature.

I read a book each night just before I go to sleep.

The books can be read online or downloaded here: https://www.yumpu.com/fr/martine_Marcel_Marlier#

Videos with sound can be found here:

Some sample pages are below... 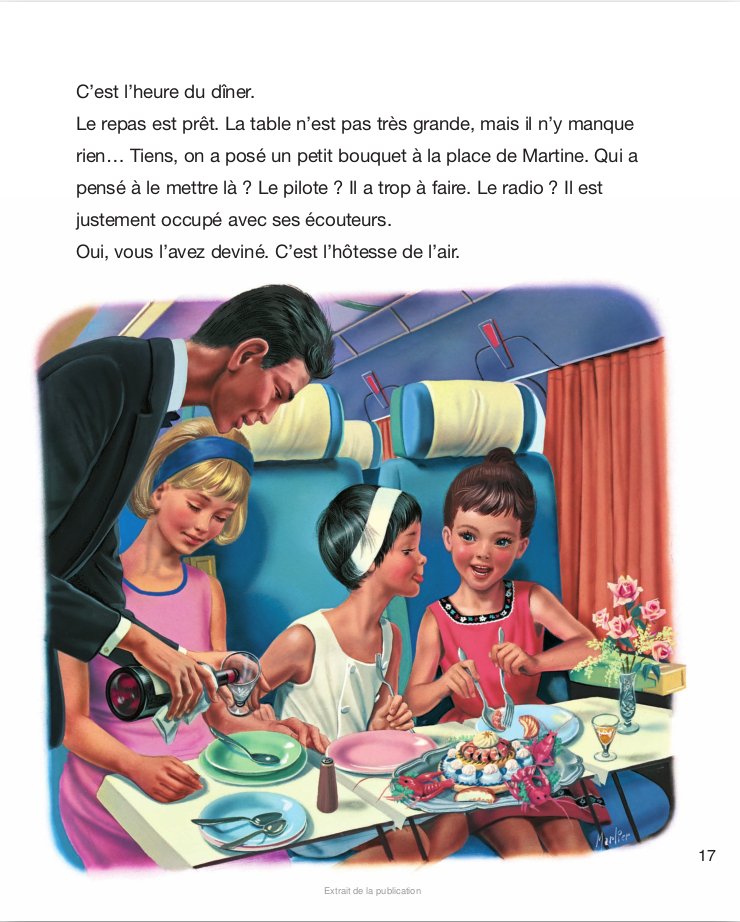 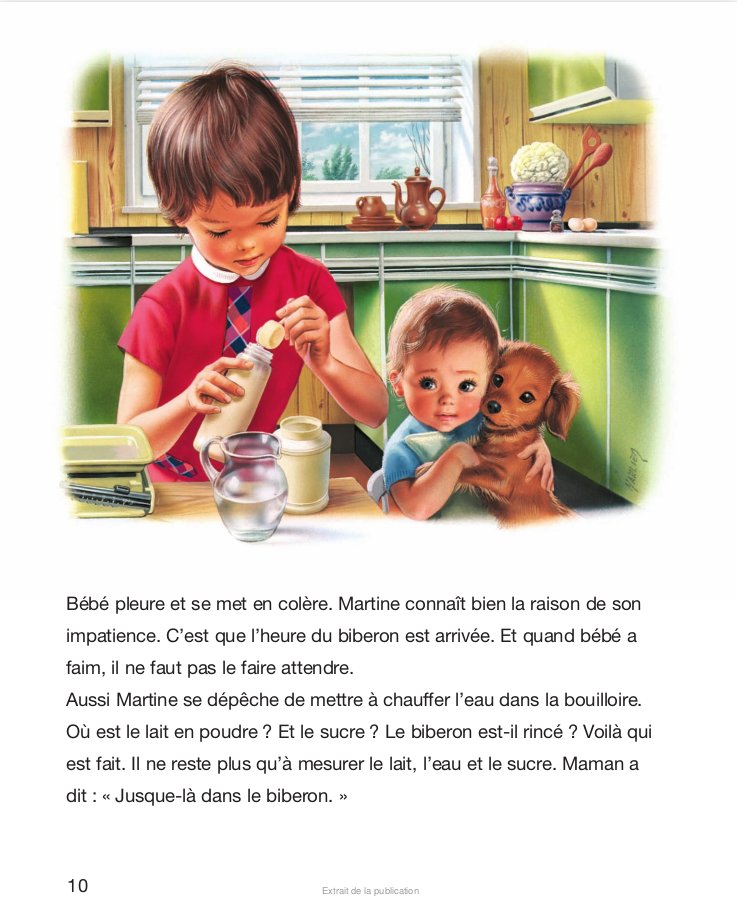 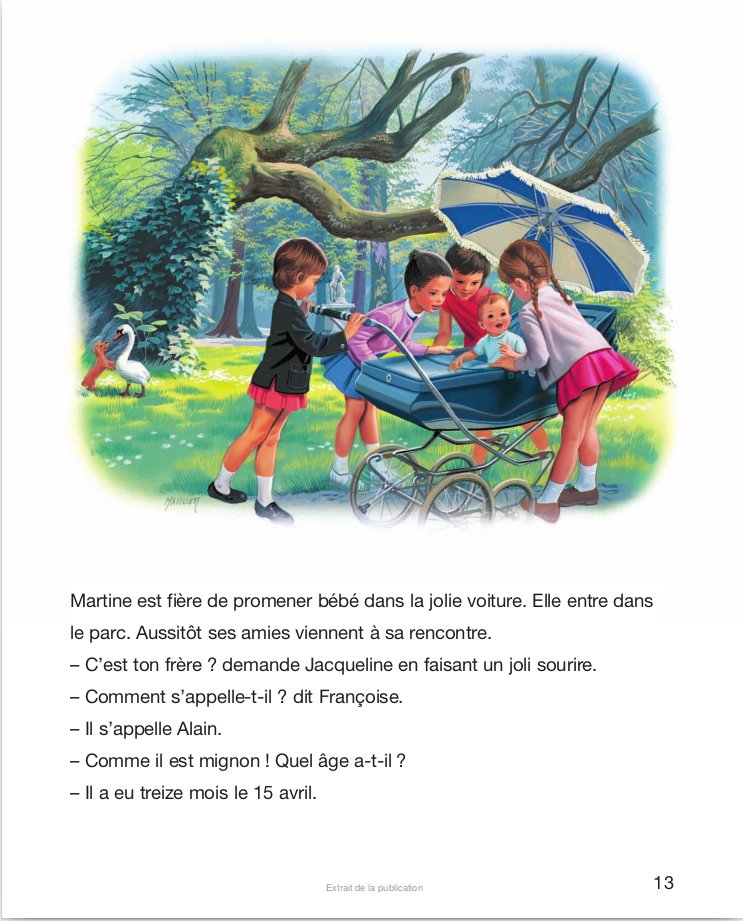 I know I haven't given this thread the attention it deserves, but finding time for the forum lately is not a priority now that I'm trying to juggle 3 languages and more is happening at home... This is just a little message to those who have posted replies (thank you), that I haven't yet responded to. I haven't ignored the posts and I intend to reply in due course. In the meantime...

I did get my hands on a copy of this book. I've started reading it with my daughter perhaps a couple of weeks back and we're a couple of chapters in so far. It's really a tad beyond her level, but that's not so bad as we agreed to read each chapter a couple of times and I don't think it hurts for her to hear a little more of a complicated story among some other easier reading. We won't get through it in lightening speed, as only certain moments are suitable on days here and there for reading the book together. It's a little early to rate the book, but it seems enjoyable so far.

I have read Sans Famille repeatedly and watched it repeatedly https://www.youtube.com/watch?v=hUNX41kMdLU&t=244s

It is a gem. It is to be savored and not rushed through.
2 x

rdearman wrote:Couldn't figure out anyway to copy this post into both places. So just pasting the link:

I'm just going to copy it and delete the above post. Thanks.

I thought I'd share for those who aren't fully aware of them...
jardin3.jpeg
Anyone read these books? J'adore ces livres !

I thought I'd add a little to this thread as we've now made some progress on some of the suggested titles. We have read some of the Martine books before and I've always aimed to read more as they do seem quite good, however I guess I was looking for books with chapters more so. Still, it was worth a mention, bedtime, rdearman and AnneL, and I agree they are decent books for kids.

We completed (I read it aloud to my daughter) L'Oeil Du Loup some months back. It was enjoyed by both of us and was quite a good 'chapter book' to start with, as it was an easy read and an interesting story

Mémoires d'un âne we recently completed as well. The language was a bit trickier than the above title. I found myself looking up words I didn't understand together with my daughter as we read. I encourage her to ask me about words she is unsure of and they're often the same ones I've not come across before. The book was perhaps a bit above her level but as us language learners know, it's good practice to challenge ourselves with content that's a little above our level. Truth be told it was good practice for me too. Still we bothed enjoyed it thoroughly! Thanks for your suggestions reineke

La guerre des boutons. Purchased, but on hold for now as your advice to mark it for 'later' seems sound.

It is a gem. It is to be savored and not rushed through.

Sans famille. This one we had started before the other two we completed above, but we put it down since it was a little trickier than L'Oeil Du Loup in particular, which we both agreed would be better to read first before coming back to this title. Then we opted to read Mémoires d'un âne. Anyway we are now back with Sans famille and enjoying it again. Despite these being kids books, I love the reading with my kids (well my eldest in this case), as I'm certainly learning myself as well. Anyone out there considering teaching their kids languages, do it! It means you get more language learning time and quality time with your kids!

yong321 wrote:Antoine de Saint-Exupéry's Le Petit Prince is a good one. It was extremely popular, and is still widely read. But honestly, I would say adults probably enjoy reading it more than young children, even though it's meant to be read by children.

I read it along with its English (trans. Trumpet Club, 1988) and Chinese versions, and found some questionable translations. For example, "je découvrirai le prix du bonheur" was translated as "I shall show you how happy I am", "marchands d'amis" as "shop anywhere where one can buy friendship", etc.

We've owned this book for quite a while. I cannot recall whether we've made it right through before, but upon the request of my daughter, we are back reading this one again as well. We'll chip away at it.

I have a bunch of digital copies of Le Petit Nicolas, which you've reminded me of. I must go back to them. I'm not as keen on digital content with my kids, but occasionally I do utilise digital material, especially with Dutch when I was lacking actual physical books. With French we have built up a decent enough library of physical books and don't need to resort to digital counterparts. Still, I might as well make use of these.

Mes Premiers J’aime Lire and J’aime Lire are two magazines which we had borrowed on occasion from the Alliance Française when my daughter was attending weekly classes there. Since then we've subscribed to Les histoires pour les petits (comes with audio too), Wakou and Youpi. We've built up a good collection of those now. Youpi has perhaps been the biggest success, but all 3 of these magazines have been a hit with the kids and I'm always reinforcing my French by reading them aloud to the kids and picking up new vocabulary. You see as my kids French grows I will cover more and topics (some that I'm not so into myself) and thereby expand my vocabulary. It's bloody fun!

Martine I mentioned above. Cheers.


I'll keep coming back to this thread I think, for ideas, since there are plenty more there to be investigated and read at some point. So if anyone wants to add any more, be me guest. I'm sure people other than myself can utilise this thread. I was specifically looking for lengthier books ('chapter books') that would be suitable for kids for around 10 years old (under or over this bracket is fine). My daughter is younger than this, but seems to like the more challenging books from time to time.

I must reiterate in my defense that we do own a good collection of books and magazines and that I read to my children several times a week for lengthy periods, thus I'm not clueless about resources, but the 'chapter books' (and in particular French classics) I wasn't so up to speed on. Our small dent in the suggestions in this thread simply means we were reading lots of other (usually shorter) books too. Thanks again everyone! Apologies if I haven't thanked anyone who has also mentioned titles above but who I've missed out on quoting.
3 x
Post Reply
20 posts