Cavesa wrote: ... English has been spreading unhealthily all over the science world ...

At the time I entered university, although it was already being displaced by English, German was still the “dominant language” in the scientific community. Being able to read German at the low-intermediate level was considered to be an essential requirement for candidates wishing to study or work in any field of science. Specialized courses and materials were designed for the teaching of Scientific German (my collection of vintage language-learning materials includes three such course books). At the time, I did not view the presence of a dominant language in any area of academic, scientific, or industrial pursuit as being “unhealthy” even in cases where the predominant language was not my own. On the contrary, I viewed the prospect of learning a second language as a means of accessing vastly more information than I could in English alone, not to mention an exciting personal adventure. Apparently, the Québec government disagrees.

What a mess! The only consolation that we, and the Université de Laval student, might share is that it is highly unlikely that the well-intentioned legislators ever foresaw such a situation and, despite the ample evidence from history, never would have believed that the bureaucracy which would be required to ensure compliance would yield such deplorable results.

Please note carefully, I am NOT suggesting that this thread be diverted into a discussion of the province’s language laws. Doing so would be terribly divisive, it would solve nothing, it would not advance our understanding of French or of any other language, it would not be of any assistance to the Université de Laval student, and it would cause this thread to be deleted.

It would cause it to be locked, Speakeasy

But I'm, somewhat apprehensively, letting it continue. Tbh I don't think there is much more to be said beyond expressing further sympathy for the poor lady.
2 x

I am saying that having one language as too dominant is in many ways unhealthy. I've seen it first hand, that the non anglophone scientists are often at a disadvantage, because they simply sound worse in the foreign language, less smart, less knowledgeable. While the English natives are never in the situation of having to be good in a different language too. The publishing is complicated due to this too.

Having several major science languages would fix this. It should be automatic, that nobody on the planet gets a university degree without at least C1 in at least one foreign language. Even that is already very little. If you are unable to learn a language, you are clearly not hard working enough to merit a degree.

This woman is clearly being punished for something, which is the norm and a requirement not only at her university. If we were in a bit different situation, in which several major languages were considered equal, this wouldn't happen.
4 x

Cavesa wrote:I am saying that having one language as too dominant is in many ways unhealthy...

"Too dominant" is virtually impossible to define to the satisfaction of a large number of people. Irrespective of “which” language is predominant there are definite benefits to be gained from the existence and use of Lingua Franca. Nevertheless, as we’ve discussed this numerous times before, I believe that diverting this thread into such an area would show a disregard for the of the Université de Laval student’s unhappy predicament, something which would be unworthy of us all.

I extend my appreciation to Carmody for his display of courage in reporting this matter; in doing so, he incurred the risk of receiving a warning from the Moderators for having deliberately sought to provoke a political discussion over a divisive issue, a warning which would have been recorded under his UserName. Idem to the Moderators for having allowed this matter to be reported and for having not reacted as in Gary Larson’s “God at HIs Computer” cartoon. 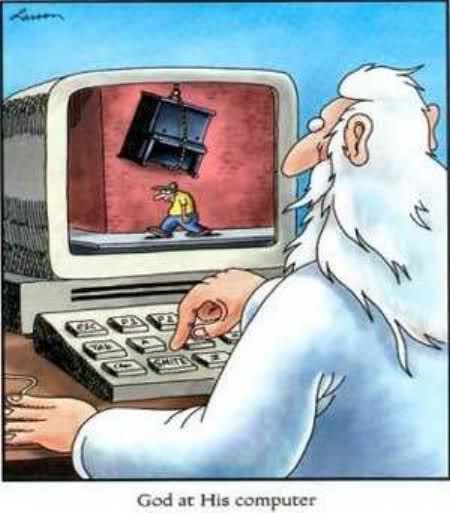 Finally, many thanks to the members for having resisted the temptation of debating the underlying issues.

The moral of this story is that sh*t happens, it happens all the time, it happens to everyone, there's no rational justification for it happening to innocent victims. Iguanamon was (depressingly) right.

She will get her immigration certificate after all.

What is an "immigration application" anyway, some sort of permanent residence?
0 x

Saim wrote:What is an "immigration application" anyway, some sort of permanent residence?

As it says in the article: "... a Quebec selection certificate, the first step toward permanent residency, under the province's experience program."
0 x
Dutch

In the Sunday NYTimes

Carmody, thank you for posting the link to the New York Times article. As the publisher grants the free reading of one article to visitors to their online newspaper, I have copied/pasted it below. In addition, I find it interesting that journalist referenced the “Bonjour-Hi!” controversy that has taken up far too much oxygen in this province over the past year.

Dan Bilefsky in New York Times, November 8, 2019 wrote:
For Quebec, a French Woman May Not Be French Enough
A French woman was denied a certificate she needed before she can settle permanently in Quebec on the grounds that she had not demonstrated sufficient proficiency in French.

MONTREAL — Is a French woman who grew up speaking the language of Molière not French enough for Quebec?
That question was being debated in Canada this week after Émilie Dubois, a 31-year-old French citizen fluent in French, was unable to get a certificate she needs to settle permanently in Quebec.

Her transgression? Writing one chapter of her doctoral thesis in English rather than in French. Ms. Dubois would seem like an ideal immigrant for Quebec, a French-speaking province determined to preserve its French language and identity. She completed a biology doctorate at Laval University in Quebec City, a French-language university. She also started a scientific graphic design company.

But despite being a Francophone from Burgundy in eastern France, she said the immigration minister had written to her that she had not demonstrated sufficient proficiency in French to receive a certificate that is a prerequisite to gaining permanent residency.

“It is beyond absurd, it is not logical, it is a joke,” she said in French by phone from Quebec City. “I am a French woman.”

Marc-André Gosselin, a spokesman for the Quebec immigration ministry, said the minister was aware of the case, had deemed that it “made no sense” and had asked that the ministry review the file. He said officials had also reached out to her on Friday.

But Ms. Dubois was still baffled. “I started my own company,” she said. “I hired people, I am expanding Quebec scientific knowledge internationally. Quebec is shooting itself in the foot. Is a French woman not French enough for Quebec?”

The letter from the immigration ministry read: “You haven’t completed your program of study in Quebec entirely in French, including the dissertation or thesis.”

Ms. Dubois, who likes painting and hiking, said she was flabbergasted since her doctoral thesis on cellular and molecular biology was written in French, except for one of five chapters written in English because it was a scholarly article published in a scientific journal.

Even after she spent $200 to pass a French test recognized by the ministry, she said she was still turned down, leaving her feeling dejected in the province where she had first arrived seven years ago and had hoped to settle. Issues of language run deep in Quebec, a majority French province surrounded by English-speaking North America, where French is the official language of government, commerce and the courts. On commercial advertising and public signs, the French must be at least twice as large as any other language.

Such are the concerns about French being threatened by the proliferation of English that the Quebec government two years ago unanimously passed a resolution calling for shopkeepers to stop saying “bonjour hi” — a popular greeting in bilingual Montreal — and to just say “bonjour” instead.

More recently, the government attracted criticism after it said Quebecers who wanted access to provincial government services like utility bills in English would need to prove they were part of the “historic English community.” That, in turn, prompted some to ask whether English Quebecers seeking utility bills in the language of Shakespeare would need to prove that their ancestors fought against the French before Quebec was ceded to Britain in 1763 after France’s defeat in the Seven Years’ War.

Thank you for your assistance.

Would you please give me some guidance re: the copying of an article and copyright laws. I thought this Forum was very worried about it; so I need guidance.
0 x
Post Reply
25 posts