The word 'zegen' (女衒) in Japanese.

The word 'zegen' (女衒) in Japanese.

I came across this word (Zegen/Zengen) as the title of an Imamura film. I couldn't work out what it was supposed to mean though. Is it a slang term?

After some investigation I got this: 女を遊女屋に売る周旋を職業とする者。which indicates that it is a madam or a procurer in a house of ill-repute. Does this seem right? Or is it just a brothel-keeper? Or something else?
0 x
Extensive reading - One book a month for 2022:
Duolingo Latin - for relaxation purposes:
Get to know the tree before you eat the fruit! (African proverb)

I think it's more the procurer side of things. Jisho gives us the definition "someone who makes their living selling women into prostitution; pimp; procurer" with the note that it's archaic rather than slang. Your own example "女を遊女屋に売る周旋を職業とする者。" also skews away from pimp as commonly understood in the West and more towards a third party that finds women and sells them to the brothel. I would interpret that as "One who works as intermediary selling women to brothels." I'd be thinking more like some sketchy loan shark that sells a daughter into prostitution to settle her father's debt rather than someone actually associated with the brothel.
1 x
2022 FR Books : 2022 Manga :
2022 ES Books : 2022 IS First Book :
2022 PT Books : Icelandic Online 4 : 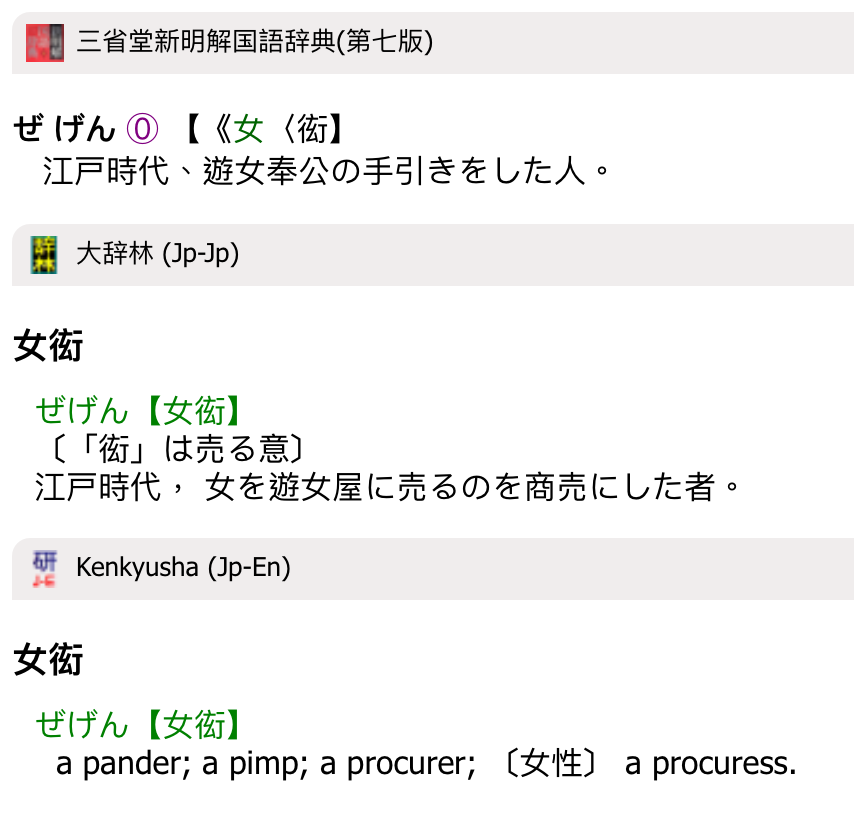 So indeed a procurer/procuress. It's good to know.

Also that 'pander' is mentioned above. Quite a lot of people have lost the original meaning of this. Named after the character Pandarus in both Chaucer and Shakespeare, the person procuring Cressida for Troilus.

People still say 'pandering' and have shifted the meaning a little. Yet who says 'a pander' now?
0 x
Extensive reading - One book a month for 2022:
Duolingo Latin - for relaxation purposes:
Get to know the tree before you eat the fruit! (African proverb)
Post Reply
4 posts • Page 1 of 1