Dr. Volker Heyd is a Professor of Achaeology at the University of Helsinki in Finland. He studies past cultures in the bronze age using tools from genetics, archaelogy, and anthropology. In this interview, we talk about the Yamnaya people of Eurasia and the complexity of understanding how they spead across two contintents!

Fatyanovo the Ancestor of the Indo Iranians (Documentary)

another view on the Proto-Indo-European homeland: the fact that all current descendant languages of the Proto-Indo-European mother (except Anatolian (Hittite ..) derive from the European steppe is intact, however, looking further back in history: the very first homeland is seen outside of Europe, somewhere in Iran
-------------
https://pure.spbu.ru/ws/files/53198823/ ... _2019_.pdf

This study collates linguistic, genetic, and archaeological data
relevant to the problem of the IE homeland and proto-IE (PIE)
migrations. The idea of a proto-Anatolian (PA) migration from
the steppe to Anatolia via the Balkans is refuted by linguistic,
archaeological, and genetic facts, whereas the alternative
scenario, postulating the Indo-Uralic homeland in the area east of
the Caspian Sea, is the most plausible. The divergence between
proto-Uralians and PIEs is mirrored by the cultural dichotomy
between Kelteminar and the early farming societies in southern
Turkmenia and northern Iran. From their first homeland the
early PIEs moved to their second homeland in the Near East,
where early PIE split into PA and late PI

When it seems like the whole world has gone crazy

Kraut wrote:When it seems like the whole world has gone crazy
https://eurogenes.blogspot.com

I notice with satisfaction the critical comments from Wednesday, October 20, 2021 concerning the nomenclature used in an article in Nature. I have already in my discussions here at Llorc (and my two lectures in Bratislava) pointed to the fact that the Yamnaya expansion happened long before the invention of proper war chariots, and I also think I have mentioned that they probably got some kind of horses from the Botai tribe, but they didn't have saddles nor stirrups yet, and heaven knows what those early horses were worth, so it would be false to ascribe the success of the Yamnaya to the use of horsedrawn fast chariots - they simply didn't have them. Actually it still is a puzzle to me what exactly the Yamnaya had which made them so much stronger than their opponents in Europe. They may have brought the pest to Europe, but in a form that (according to the specialist in insect genetics) couldn't be transmitted by insects. The blogspot contains this interesting passage: "they [i.e. the modern domesticated horses] expanded rapidly across Eurasia from about 2000 bc, synchronously with equestrian material culture, including Sintashta spoke-wheeled chariots." And the Yamnaya are supposed to have spread already from around 2800 BC, so what gave them their obvious military advantage?

The world is indeed crazy!

PS: I just found something interesting about ther Hungarians in the same blogspot, back from January 14 2020:

According to historical sources, ancient Hungarians were made up of seven allied tribes and the fragmented tribes that split off from the Khazars, and they arrived from the Eastern European steppes to conquer the Carpathian Basin at the end of the ninth century AD. Differentiating between the tribes is not possible based on archaeology or history, because the Hungarian Conqueror artifacts show uniformity in attire, weaponry, and warcraft. (...)The presence of the N3a haplogroup is interesting because it rarely appears among modern Hungarians (unlike in other Finno-Ugric-speaking peoples) but was found in 37.5% of the Hungarian Conquerors. This suggests that a part of the ancient Hungarians was of Ugric descent and that a significant portion spoke Hungarian. We compared our results with public databases and discovered that the Hungarian Conquerors originated from three distant territories of the Eurasian steppes, where different ethnicities joined them: Lake Baikal-Altai Mountains (Huns/Turkic peoples), Western Siberia-Southern Urals (Finno-Ugric peoples), and the Black Sea-Northern Caucasus (Caucasian and Eastern European peoples). As such, the ancient Hungarians conquered their homeland as an alliance of tribes, and they were the genetic relatives of Asiatic Huns, Finno-Ugric peoples, Caucasian peoples, and Slavs from the Eastern European steppes.

(end of quote). Arpad who lead these 'conqueror' tribes into presentday Hungary around 900 AC is reputed to have claimed that he descended from Attila the Hun himself. The Hungarian invasian happened fairly late, but the invasions by 1) the Huns under Attila and 2) a mix of tribes under Arpád are in many ways reminiscent of the invasions by the much older Steppe and Steppe-forest people. I have in another part of this quite interesting blogsport seen the theory that R1B (which became dominant in Western Europe) was indeed introduced by the Yamanya, but the R1A from Eastern Europe was introduced by a slightly more Northern group consisting of Steppe-Forest dwellers, and these people initiated the Late Neolithic Corded Ware culture that in some respects was similar to the Yamnaya culure (like patrilinear clans, single graves in mounds), but nevertheless quite distinct from it. This would also explain why the later Slavic invasion didn't really lead to major changes in the Y haplogroups in Eastern Europe - the Slavic invaders came to an area that already was stockfull of R1A genes.
5 x

Iversen wrote: ... so it would be false to ascribe the success of the Yamnaya to the use of horsedrawn fast chariots - they simply didn't have them. Actually it still is a puzzle to me what exactly the Yamnaya had which made them so much stronger than their opponents in Europe.

A tribe vs a village would have given them a numerical advantage in each skirmish, perhaps they just had better fighting skills too?
0 x

Iversen wrote: ... so it would be false to ascribe the success of the Yamnaya to the use of horsedrawn fast chariots - they simply didn't have them. Actually it still is a puzzle to me what exactly the Yamnaya had which made them so much stronger than their opponents in Europe.

A tribe vs a village would have given them a numerical advantage in each skirmish, perhaps they just had better fighting skills too?

Maybe this guy moved to their village? 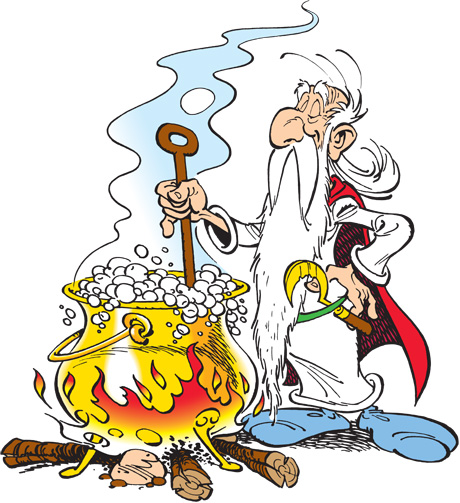 Le Baron wrote:Maybe this guy moved to their village?

I was a bit shocked to learn the other that they're still publishing new Asterix books! (not the original authors)
0 x

DaveAgain wrote:I was a bit shocked to learn the other that they're still publishing new Asterix books! (not the original authors)

Yes, it's just marketing an idea now. I've never read the very last ones (not even the one(s) Uderzo did on his own). I'd like to keep the memory of the classic ones intact. I'm glad there are no new Tintins.
1 x
21 books for 2021:
As jy nie wil glo nie, kan jy proe.

Abstract:
This paper aims to provide an overview of the current understanding in Yamnaya burials from north of the Lower Danube, particularly focussing on their relationship with supposed local archaeological cultures/societies. Departing from a decades-long research history and latest archaeological finds from Romania, it addresses key research basics on the funerary archaeology of their kurgans and burials; their material culture and chronology; on steppe predecessors and Katakombnaya successors; and links with neighbouring regions as well as the wider southeast European context. Taking into account some reflections from latest ancient DNA revelations, there can be no doubt a substantial migration has taken place around 3000 BC, with Yamnaya populations originating from the Caspian-Pontic steppe pushing westwards. However already the question if such accounts for the term of ’Mass Migrations’ cannot be satisfactorily answered, as we are only about to begin to understand the demographics in this process. A further complication is trying to assess who is a newcomer and who is a local in an interaction scenario
that lasts for c. 500 years. Identities are not fixed, may indeed transform, as previous newcomers soon turn into locals,while others are just visitors. Nevertheless, this well-researched region of geographical transition from lowland eastern Europe to the hillier parts of temperate Europe provides an ideal starting point to address such questions, being currently also at the heart of the intense discussion about what is identity in the context of the emerging relationship of Archaeology and Genetics

During the Early Bronze Age, populations of the western Eurasian steppe expanded across an immense area of northern Eurasia. Combined archaeological and genetic evidence supports widespread Early Bronze Age population movements out of the Pontic–Caspian steppe that resulted in gene flow across vast distances, linking populations of Yamnaya pastoralists in Scandinavia with pastoral populations (known as the Afanasievo) far to the east in the Altai Mountains1,2 and Mongolia3. Although some models hold that this expansion was the outcome of a newly mobile pastoral economy characterized by horse traction, bulk wagon transport4,5,6 and regular dietary dependence on meat and milk5, hard evidence for these economic features has not been found. Here we draw on proteomic analysis of dental calculus from individuals from the western Eurasian steppe to demonstrate a major transition in dairying at the start of the Bronze Age. The rapid onset of ubiquitous dairying at a point in time when steppe populations are known to have begun dispersing offers critical insight into a key catalyst of steppe mobility. The identification of horse milk proteins also indicates horse domestication by the Early Bronze Age, which provides support for its role in steppe dispersals. Our results point to a potential epicentre for horse domestication in the Pontic–Caspian steppe by the third millennium BC, and offer strong support for the notion that the novel exploitation of secondary animal products was a key driver of the expansions of Eurasian steppe pastoralists by the Early Bronze Age.